Despite improvements in early warning systems and disaster response infrastructure, India and other countries in South Asia are still grossly unprepared to protect climate migrants. 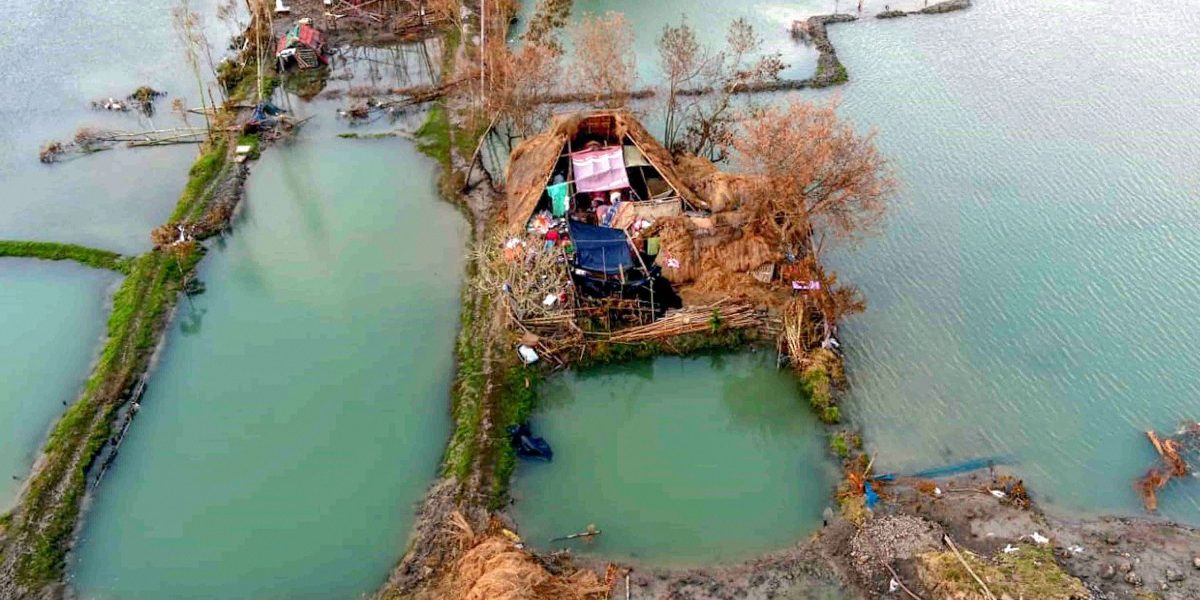 Cyclone Amphan, the most powerful storm in the Bay of Bengal in over a decade, ripped through eastern India and Bangladesh on May 20, killing at least 86 people in West Bengal, destroying thousands of homes and uprooting innumerable trees. Authorities are still struggling to mount relief operations amid a lockdown to contain the unprecedented coronavirus pandemic.

The cyclone, equivalent to a category-3 hurricane, tore through thickly populated areas of southern Bengal, making landfall on the coast at sustained wind speeds of 170 kilometres per hour (kmph), with gusts of up to 190 kmph and stormwater surges of up to 16 feet. The plight of millions who have lost their homes has been made worse in a situation when the coronavirus epidemic is raging across the region.

COVID-19 has multiplied the vulnerability of people who are at risk of displacement by storms, floods and other climate disasters. “The government infrastructure has been inadequate to provide shelter to all the people evacuated as the cyclone hit,” said Harjeet Singh, Global Lead for Climate Change at ActionAid International. “Now, to maintain social distancing to avoid the spread of coronavirus, there is a risk that cyclone shelters will be too small and will lack proper sanitation services, especially for women.”

The double whammy of COVID-19 pandemic and disasters like Cyclone Amphan requires revised standard operating procedures during the evacuation, according to Sanjay Vashisht, Director of Climate Action Network in South Asia (CANSA). “Our disaster mitigation infrastructure falls short in ensuring social distancing, Vashisht said. “More evacuation centres need to be constructed to be able to accommodate less people to ensure distancing, and more medical facilities and quarantine centres are required,” he said.

“With the current COVID-19 pandemic measures requiring social distancing, it will be extremely difficult for people in cyclone shelters,” said climate scientist Saleemul Huq of the Dhaka-based International Centre for Climate Change and Development. “This was indeed unforeseen but represents a double emergency.”

In the immediate aftermath of a disaster, displaced people need food, shelter, security and healthcare. However, it has to be also kept in mind that they will need support to rebuild their houses and restart their livelihoods. For this, there is a need for long-term support to build climate resilience. The super storm, the first in this year’s season of cyclones and floods, once again underlines these issues that need to be addressed in the medium and long term.

South Asia has emerged as a global hotspot for disaster displacement in recent times. The region recorded 9.5 million new displacements associated with disasters in 2019, the highest figure since 2012, according to the 2020 Global Report on Internal Displacement. Floods triggered by the monsoon in India and Bangladesh and Cyclones Fani and Bulbul were among the events to force most people to flee their homes last year. 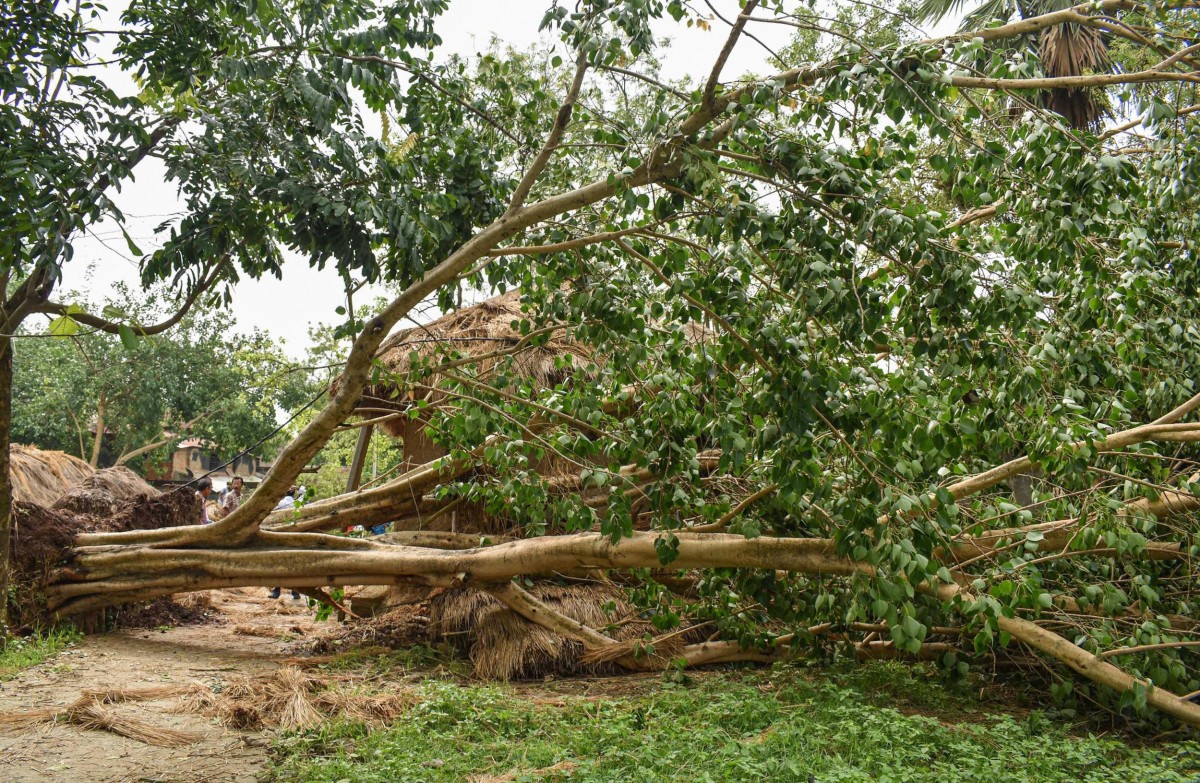 An average of 6.5 million disaster displacements was recorded in the region over the past decade, making it one of the most affected worldwide, the report said. In 2019, there were five million new disaster displacements in India, the highest in the world. This was the result of a combination of increasing hazard intensity, high population exposure and high levels of social and economic vulnerability. There were eight tropical storms that hit the country in 2019.

The most severe was Cyclone Fani, which barrelled into the states of Odisha, Andhra Pradesh and West Bengal in early May 2019, before moving north to Bangladesh. Equivalent to a category four hurricane, Fani was the most powerful storm to strike the country in the past five years, and the most intense to form in the Bay of Bengal since 1999. Nearly two million people were displaced due to Fani. Another 289,000 people were evacuated in Gujarat in June 2019 ahead of Cyclone Vayu.

The south-west monsoon triggered more than 2.6 million displacements in the months that followed. India’s commercial capital of Mumbai and the southern state of Kerala saw unprecedented rainfall and floods, displacing millions. The north-west monsoon continued to trigger displacement in October and November, along with Cyclone Maha, which hit Kerala and the Lakshadweep Islands on 31 October. Cyclone Bulbul struck Odisha and West Bengal 10 days later, triggering 186,000 displacements.

There were around 590,000 people living in internal displacement as a result of disasters across the country as of 31 December, but the figure is highly conservative given the high number of new displacements and the damages and losses recorded during the year, the GRID report said.

As climate change makes extreme weather events more likely in India and its neighbouring countries, there is an urgent need to look at the plights of millions of people, mostly the vulnerable poor, and ways must be devised to build resilience and alleviate their suffering.

It is not as if there have not been improvements in mitigating natural disasters. Recent advances in weather forecasting and early warning systems have been instrumental in saving many lives. In 1970, when Cyclone Bhola devastated Bangladesh, half a million people died. In 1999, the Odisha super cyclone resulted in close to 10,000 fatalities. In contrast, less than a hundred people lost their lives due to Cyclone Fani and Cyclone Bulbul cost less than 50 lives.

Few states like Odisha have benefited from early warning systems, but such robust response mechanisms need to be adopted against all disasters in all states, said Vashisht. “Although India has been able to reduce life losses through better response, the loss of infrastructure is still there due to high intensity of disasters,” he said. “The people, therefore, need a much longer time to cope by building critical infrastructure once again and restarting their lives.” Robust early warning systems and mechanisms to evacuate people before disasters like cyclones and floods hit only helps in saving lives, and not in protecting property and people’s livelihoods, which take months and years to recover, Singh of ActionAid points out.

After managing to save the lives of people, it’s time to graduate disaster response to save strategic infrastructure and make available schemes to support the restart of income-generation activities, Vashisht said.

“The government must enhance adaptive measures of retrofitting public infrastructure like schools, hospitals, roads and houses to make them disaster-proof, and strengthen local communities by providing various livelihood options and tools for climate-resilient agriculture,” Singh said. “The poorest people, particularly women, children and older people, are most affected by disasters and need to be protected with additional support such as safe housing and food security.”

People’s livelihoods in India and elsewhere are being devastated by intense flooding, chronic drought, sea-level rise and changing weather patterns. As local coping mechanisms fail, people are forced to migrate to survive and make an alternative living to feed their families, according to a recent policy brief published by Actioinaid International titled Climate Migrants Pushed to the Brink.

The policy brief asks several pertinent questions that include whether marginalized communities get support in reducing their vulnerability to climate risks; how do climate migrants and those who are displaced get basic services such as education, food, shelter and security; do women have access to quality healthcare and sanitation during disasters; and whether affected communities get support to recover from climate impacts.

“The number of people displaced by climatic disasters is increasing, but there is no comprehensive policy response from the government to tackle this growing problem,” said Singh, one of the authors of the policy brief. “The gaps start with a failure to recognize the scale of the problem, and inadequate data collection, to a total absence of local level strategies to address disaster displacement.”

The only way to devise and implement better policies on disaster displacement, which does not seem to be happening, said Vashisht of CANSA. As of now, disasters mean a rapid evacuation of people, he said. After the threat is gone, people are mostly left to fend for themselves.

“A better response framework needs to work on building long-term resilience to curtail the rate of displacement due to loss of livelihoods,” Vashisht said. India’s rural jobs guarantee programme is an example of a social scheme that can help those on the margin of migration, he said. “A comprehensive response is missing that should comprise options to start alternative livelihoods, easy and low-interest loans to pull an impacted and vulnerable population out of the debt trap and taking in account impact of slow onset events on lives and income generation activities.”

Although there have been substantive improvements in dealing with climate displacement, a lot more needs to be done, according to environmental economist Nilanjan Ghosh, director at Observer Research Foundation, Kolkata.

There is a lot to be argued in favour of adaptive and accommodative infrastructure, Ghosh said. “At the same time, I would stress on India thinking seriously about the strategic and managed retreat of the population from the vulnerable regions. This mode of adaptation has its own challenges, but it needs to be taken up when all other forms of adaptation fail.”

Developing nations might not always have the wherewithal to mitigate threats and infrastructural interventions have their limits, experts opined. “But nature plays its own games. Under such circumstances, the only way is to adapt to the ways of nature. That is why I will always talk of infrastructure that are adaptive in nature and can mitigate impacts,” Ghosh said.

“In sites where such interventions fail, we need to have that capacity to move the population to safer zones,” he said. “This definitely requires better modelling and forecasting capacities.”

This article was originally published on Mongabay and is republished under a Creative Commons license.