The police in Kashmir are whisking away people in overnight raids and silencing voices of dissent over the Valley. 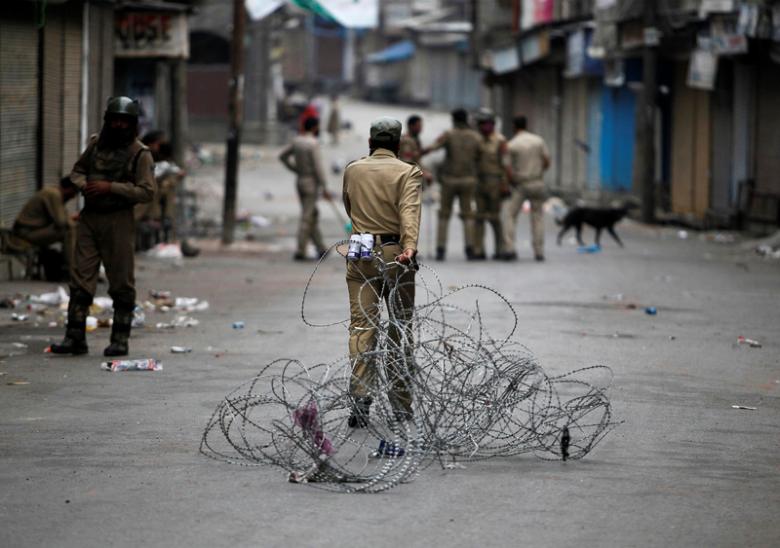 A policeman pulls concertina wire to lay a barricade on a road during a curfew in Srinagar July 12, 2016. Credit: Danish Ismail/Reuters

Srinagar: At 11:20 pm on September 20, as uneasy calm wrapped the streets of Kashmir as a posse of Jammu and Kashmir police barged into a house in uptown Srinagar on the banks of Doodganga stream and whisked away a young boy, Nouman Ahmad.

His mother, Maimoona, a widow, tried to raise an alarm to draw her neighbours’ attention but a policeman “shut my mouth” till Nouman was taken away.

Within minutes there was an announcement on the loudspeaker of a local mosque in old Chanpora, asking people to come out of their homes and join a protest.

Barely 15 minutes later, the streets outside Khan mohalla were filled with men, women and children who marched towards the local police station to seek the boy’s release amid anti-government slogans. However, they returned disappointed.

“The police official in-charge told us that Nouman was picked up by a police party from Raj Bagh police station. We were told to take up the matter with the SP [concerned],” Maimoona told The Wire, as she pleaded with her neighbours to support her in getting her son released.

Eighteen-year old Nouman, a school dropout, according to some local residents who spoke to The Wire, had participated in protests against the police in recent weeks though in what manner was unclear.

A man from the neighbourhood, Feroz Ahmad, said that the police picked up three boys from the area during night raids in the past 10 days but none have been released so far.

Fearing a backlash during the day, the J&K police and CRPF have been conducting overnight raids to round up those they consider “provocateurs” as well as ordinary youths accused of organising protests in the Valley. In the eleven weeks since the death of militant commander Burhan Wani, 87 civilians have died in police action while over 12000 people have been injured. The state health department records show that 837 of the injured have been hit by pellets in one or both eyes, while 4731 persons have received extra-occular pellet injuries (injuries in body parts other than eyes) in the ongoing unrest. Doctors at Srinagar’s Shri Maharaja Hari Singh Hospital, the only hospital in Kashmir with full-fledged department of ophthalmology, fear that 70 to 80% of victims hit in the eyes will have “less than usable vision” – the human rights bodies and opposition in Kashmir have accused the state government of allowing unchecked use of pellet guns by the forces to deal with the protesters. According to the government, some 4,000 police personnel have also sustained injuries in the protests, which frequently turned violent.

A police statement on Wednesday said that 64 persons involved in “disturbing the situation and harassing people” were arrested from different districts to “curb the activities of miscreants”.

Over the past 10 days, the police have been frequently issuing statements detailing the number of arrests made during the raids.

A senior police official from south Kashmir, which is at the centre of the unrest, said that more than 600 cases have been registered against “rioters and anti-national elements” across the region, over the four districts that have witnessed 57 of the 87 civilian killings.

Since the protests erupted in the Valley on July 9, the day after Wani was killed in an encounter in south Kashmir, the J&K police have arrested over 2600 persons, including 400 youths bracketed in the ‘master-list’ prepared by J&K police headquarters in Srinagar.

Of the total arrests made, at least 600 persons are still in ‘preventive custody’.

In Shopian district, where, like most parts of the valley, the intensity of the protests has gone down for the past few days, roads lie deserted and shops are closed. While the entry and exit points are controlled by the forces inside the district, the institutions of the state continue to remain lifeless.

Deep inside the district, in villages like Rawalpora, Kapran, Trenz and Pinjoora, people said volunteers “patrol” the roads during the night to “counter” raids by police. A team of 10 to 15 people, including the young and the elderly, remain awake during the night to keep vigil. At present around 100 persons are under arrest in different police stations across the district.

According to Ghulam Mustafa, a fruit grower, the ‘plan’ has worked as the police had to retreat in many villages after the “men-on-duty” raised an alarm on the public address systems in mosques, cautioning the villagers to come out in protest.

This strategy is in fact being followed in other districts of south Kashmir and Srinagar. In the interiors of downtown Srinagar people have even set up makeshift gates at the entrances of their neighbourhoods to stop police vehicles from moving in.

But the police are adamant to go after “trouble makers” and have prepared a list for every district.

“We have been working on a multi-pronged strategy to restore normalcy. The [overnight] raids are going because there are a lot of conspirators and instigators who are still out of the police net and they need to be dealt with by law,” S.P. Vaid, special director general of police (coordinator) law and order, told The Wire.

Apart from keeping protestors in “preventive custody” the state authorities have invoked the Public Safety Act (PSA), a law under which a person can be detained without trial for six months, to quell the protests.

Information accessed from J&K’s home department showed that government authorities in 10 districts of Kashmir have prepared cases under the Act against 327 people and at least 190 warrants have already been executed.

The Jamaat-e-Islamia, a religo-political organisation and the Tehreek-e-Hurriyat headed by the separatist leader Syed Ali Shah Geelani have accused the government of starting a witch-hunt against their members by booking them under the Act.

The Act has been increasingly used against people in the Valley after union home minister, Rajnath Singh, asked the state government to “act tough against the instigators” last month.

Introduced for the first time in J&K in 1978 against timber smuggling, the PSA was termed as a “lawless law” by Amnesty International and has been frequently used to book separatists as well as youth participating in protests.

“Whosoever will be found involved in organising violence, irrespective of where he comes from, has to be dealt with under law,” said Vaid.

The arrest of noted human rights activist Khurram Parvez, who was subsequently booked under the PSA, shows that both the state and the Centre have decided to go after voices of dissent in the Valley, rights organisations say.

Khurram, who is a coordinator for the Jammu and Kashmir Coalition of Civil Society (JKCCS) and chairperson of the Asian Federation Against Involuntary Disappearances (AFAD), was picked up by the police on the night of September 15 and placed under ‘preventive detention’. This came a day after he was stopped from boarding a flight at Delhi airport while on his way to Geneva to attend the UN Human Rights Council session.

On September 20, the principal district and sessions judge, Srinagar, had set aside Khurram’s detention orders by an executive magistrate and had directed the police to release him. The police didn’t follow the order and instead booked Khurram under the PSA on Wednesday.

“We were told that the government has registered four cases against him for provoking the youth to indulge in stone pelting and in activities which are likely to cause a breach of peace,” said a member of the JKCCS. He said Khurram was shifted to Kot Balwal jail in Jammu around 11 pm on Wednesday night.

A  journalism graduate, Khurram has been documenting human rights cases over the years and has published detailed reports on enforced disappearances, mass graves, fake encounters and ‘half-widows’ in Jammu and Kashmir. In 2006, Khurram received the Reebok Human Rights Award for his work.

In 2004, Khurram along with a colleague, Aasiya Jeelani, were on their way to monitor the assembly poll proceedings in the Lolab area of Kupwara when a hidden mine on the road exploded, throwing their car their car up in an explosive fire. Khurram was grievously injured and his leg had to be amputated while his friend lost her life.

Taking strong note of the charges against Khurram, Amnesty International issued a statement on Thursday demanding his  immediate release.

On Wednesday, police in Anantnag issued “lookout notices” against four senior members of the Hurriyat, including the party’s district president.

A police official said they were wanted for their “key role” in organising the protests in the district. “More names are in the list… arrests will follow,” said the official.

For the first time in the past 76 days of unrest, the police have issued look-out notices against people suspected of involvement with the protests.

With number and intensity of protest going down, the government seems to have adopted a hard line against separatists and other critics in the Valley.

While senior separatists including Geelani, Mirwaiz Umar Farooq and Muhammad Yasin Malik continue to be either in jail or under house arrest, the police have turned to the middle rungs of separatist groups and religo-political organisations.

On Tuesday night, the police raided the house of the district presidents of the Hurriyat for Baramulla Abdul Gani and Muhammad Yousuf Falahi. Raids were also conducted on the residence of the Muslim League’s Pulwama district president, Abdul Rashid Dar’s. However neither of them were present in their houses.

Inspector general of police (Kashmir range), S.J.M. Geelani, said that the police has identified the “trouble spots” and people who were “provoking the violence”.

“Most of these people who were fomenting trouble have been picked up but there are more people who needed to be picked up,” said Geelani.

In Tral, the native town of the slain Wani, the police arrested several Jamaat leaders, including senior members like Ghulam Mohi-ud-din Chisti, Mujahid Shabir Falahi and Tajamul Islam Mir, in an overnight raid on Wednesday.

In a joint statement issued today, the president of the opposition National Conference, Farooq Abdullah and working president, Omar Abdullah expressed concern about the absence of any meaningful political initiative from New Delhi to deal with the political situation in Kashmir. The indiscriminate use of the PSA and mass arrests can only deepen the sense of alienation in Kashmir, they cautioned.

“These arrests will only take us further away from the goal of peace and reconciliation in the state,” said the statement while noting that despite the alarming situation and the horrifying human cost of the unrest, New Delhi continues to look at the political situation in Kashmir as a matter of security.