Thousands of migrant workers are waiting to take buses to UP and the Bihar border after they lost their livelihoods due to the lockdown. 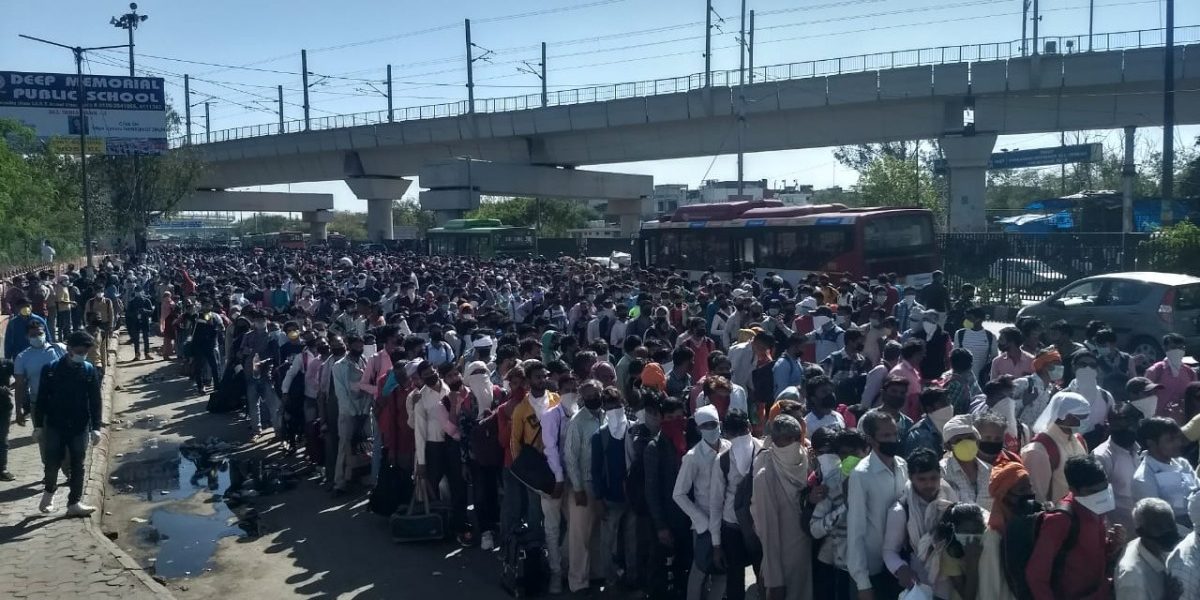 New Delhi: Near the Anand Vihar Bus Terminal and its immediate surrounding areas on the Delhi-Uttar Pradesh border, the mass evacuation of thousands of daily-wage labourers and migrant workers is underway.

Over the last five days, the national lockdown imposed to tackle COVID-19 has left a multitude of blue collar workers stranded, with nowhere to go.

After days of little action being taken by the Centre and the Delhi and Uttar Pradesh state governments, an evacuation plan for these people, who work in businesses across Delhi, Gurgaon and even Noida, is finally being implemented.

On Saturday afternoon, when The Wire visited, thousands of people had gathered in packed lines along a two-km stretch of the highway that runs parallel to the entrance of the Anand Vihar bus terminal.

Buses were being arranged from the Kaushambi depot, which is officially located in UP’s Ghaziabad, but is very close to Delhi’s Anand Vihar area. 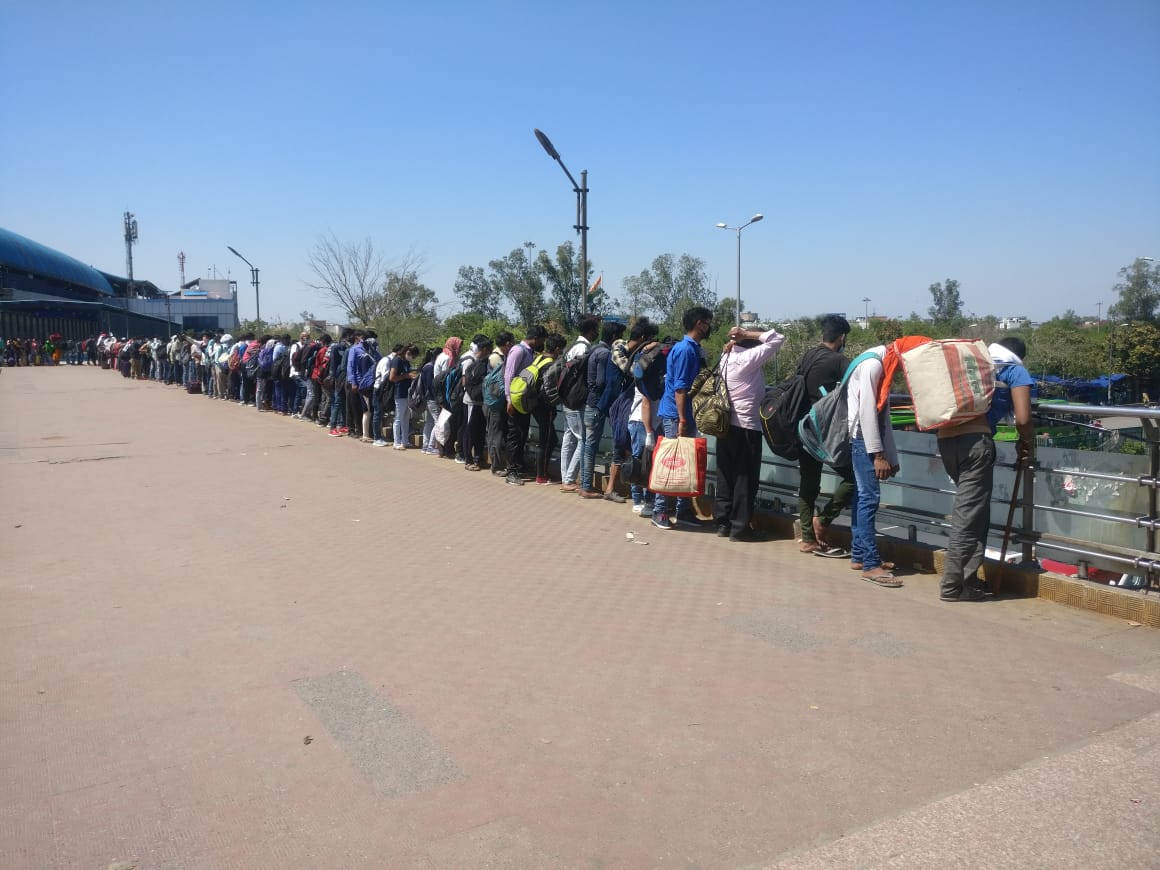 “Our incomes have stopped since the Delhi riots. I stay in Bhajanpura and work at a cloth factory. We get paid only on a piece-rate basis, we do not have fixed salaries. Since the riots, we haven’t got any work. Holi came after and now the new coronavirus. We tried staying here but we have no money left. I have two children. What will I do? We live in rented accommodation and did not have any money or food left,” said 30-year old Neeraj Kumar, who wants to go to Budaun in western UP.

Most workers The Wire spoke to repeated similar stories, saying they had no choice but to return to their homes, even if it risked passing the virus on to their village.

“I work in Haldiram’s, Sector 63, Noida. We get our salaries on the 10th of every month. Our owner did not tell us whether we will get anything this month or not. I have no money left. We used to eat at the Haldiram’s outlet where I worked but it has been shut for more than 10 days now. I have no one here who would look after me if I get infected. So I am leaving,” said Mukesh Kumar, a young worker who has to go to Madhubani, Bihar. 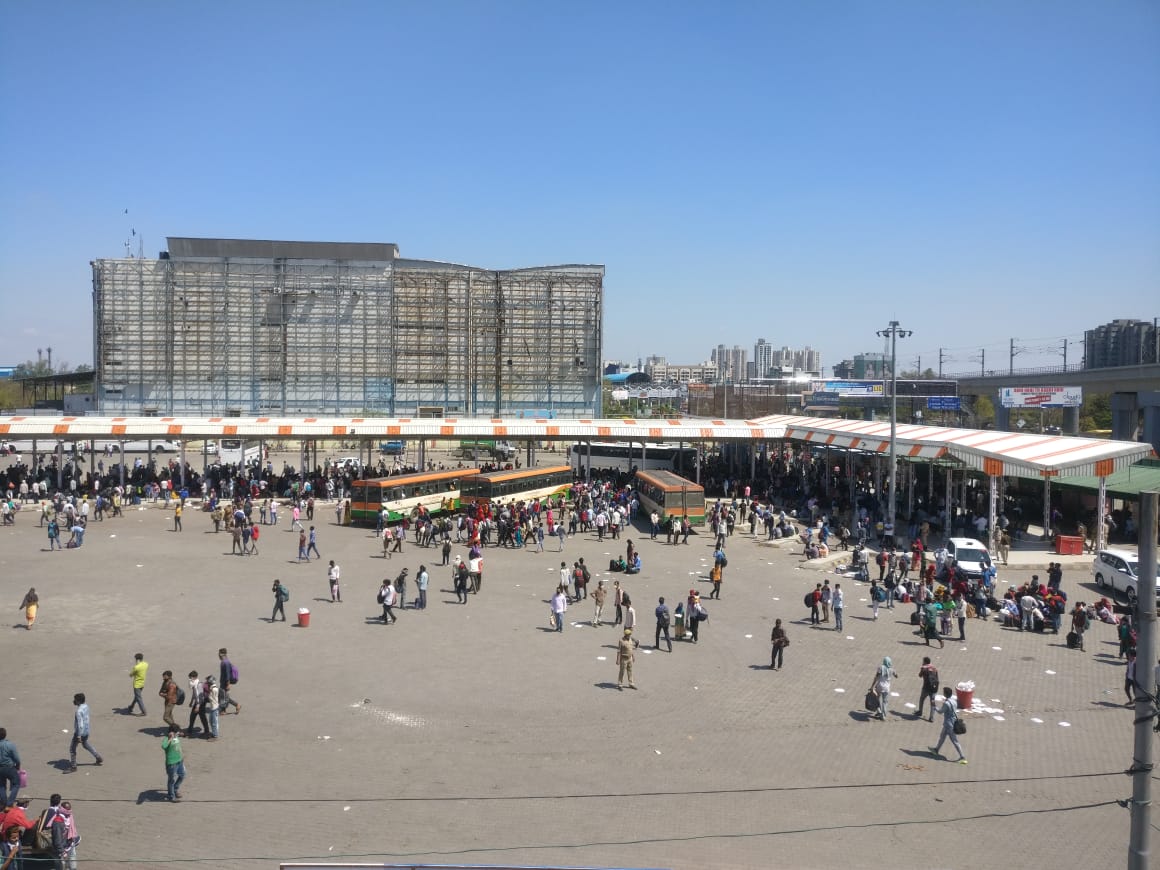 Also read: In Photos: With No Govt Aid, Locals Come Together to Help Labourers Leaving Delhi

Inside the depot sit 15 buses currently, with there being no fixed schedule on when they will leave. The buses themselves, which have a normal seating capacity of 70-75, are now being packed to the brim with anywhere between 125 and 150 passengers. The journey, officials and passengers here say, will not be free, with workers expected to pay the full ticket price. (On March 29, a day after this story was published, IANS reported that UPSRTC had decided not to charge any fare after a few complaints went viral on social media).

For several hours, there was no thermal screening done of the migrants using the buses. Some of the bus terminal staff did not have full protection gear, with a few having masks but no gloves. Later in the afternoon though, when TV news crews arrived, officials  started thermal screening everyone entering the bus station in a hurried manner.

The official in charge of the thermal screening told The Wire that nobody had been detected with fever yet. But if such a case were to happen, the worker would be taken to one of the two major hospitals in the area. 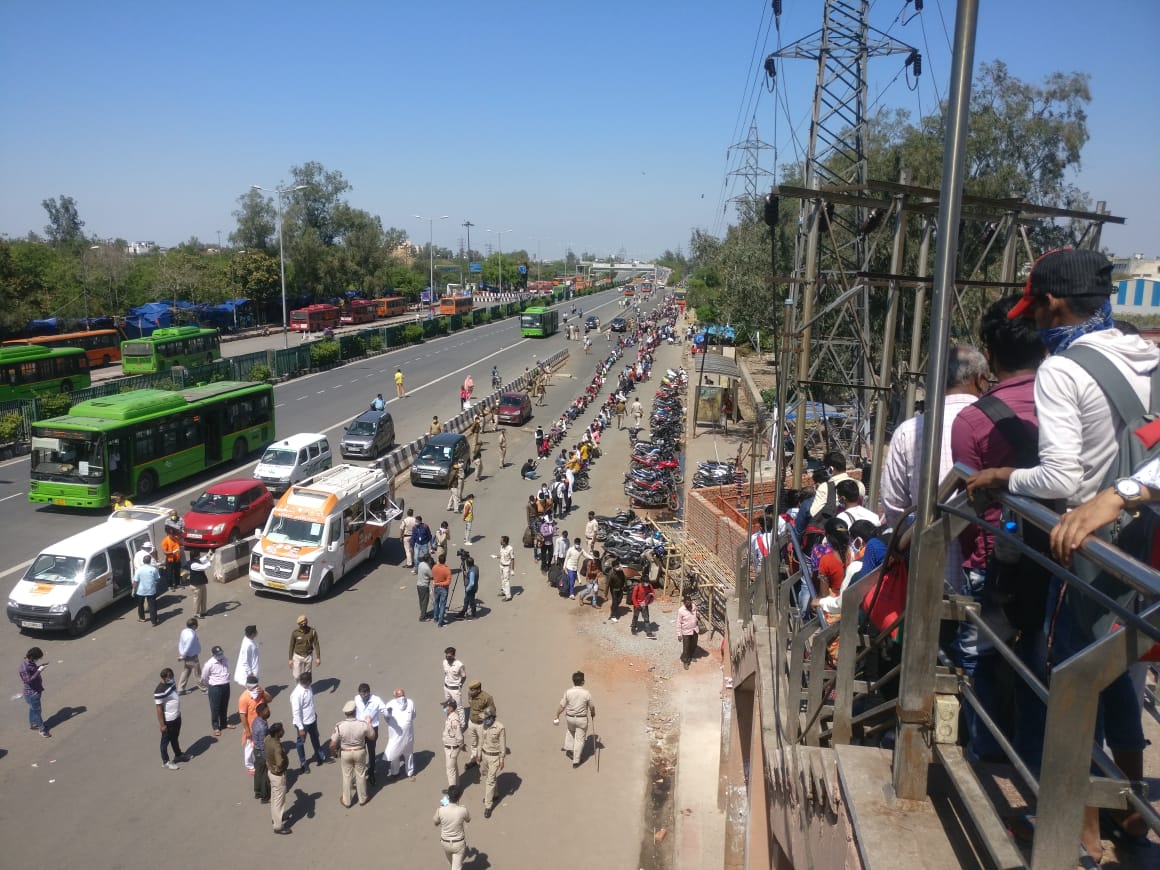 Migrant workers lining up in hopes of securing a seat to their hometowns. Photo: Ajoy Ashirwad Mahaprashasta

The thousands of workers and their families who have gathered here have the choice of taking a bus to most major cities in Uttar Pradesh, although it could take hours for them to finally get a seat depending on the route. For passengers bound towards Bihar, government officials say that they have the option of heading to a UP city that shares a border with the state and they can find their own transportation after that.

When The Wire visited though, there was confusion, with UPSRTC officials claiming that buses were leaving every 15 minutes even though we saw that none had left for over 1.5 hours.

“We have more than 1,200 buses but the challenge we are facing is to prepare a roster so that we can rotate both staff and buses. We are charging normal fares. But we are trying to arrange for transport to every town of UP. For those who want to go to Bihar, we can drop them off at at some town in eastern UP. Our services started yesterday,” said A.K. Singh, regional manager, UPSRTC, Ghaziabad.

By 3:30 pm, the crowd had swelled three times outside the bus terminal, with thousands waiting in jam packed lines, desperately hoping for a seat.

Umesh, a coolie who works at Gandhi nagar wholesale cloth market, has given up waiting for a bus. “Me and my friends have been waiting since early morning. But if I keep waiting in the queue now, I will only be able to enter the bus terminal tomorrow morning,” he tells The Wire.

Umesh and his friends, who earn Rs 300-350 on a daily basis, now plan on walking back home to their homes in Firozabad, which is 300 km away.

They had initially thought if the lockdown was only until March 31, as announced by the Delhi government before, they would be able to stay in the city. “But we have no means to stay here without any work till April 15, as the cloth market has shut down.” While Delhi government is feeding people, accommodation is tough to find – Umesh and his friends each pay up to Rs 2,000 for lodging – leaving them with no choice but to start the long trek home.

Note: An earlier version of this story mistakenly identified Anand Vihar Bus Terminal as being in Ghaziabad. It is in fact in East Delhi and lies on the Delhi-Uttar Pradesh border.