'Lest We Forget': Why India Must Remember Its Present Horror

When the age of reason returns, the people responsible should be held to account for the biblical scale of suffering they have inflicted on a people who trusted them. 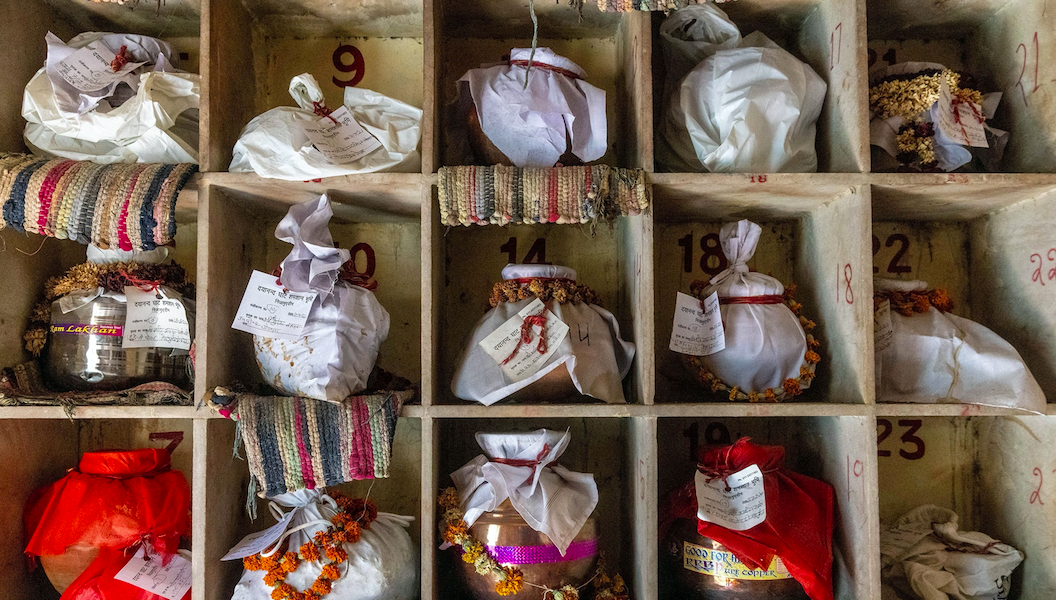 Urns containing ashes after final rites of people including those who died from the coronavirus disease (COVID-19) await immersion due to lockdown, at a crematorium in New Delhi, India, May 6, 2021. Photo: Reuters/Danish Siddiqui

At the entrance to the Hall of Remembrance in the US Holocaust Memorial, Washington, the following words are inscribed:

“Guard yourself and guard your soul carefully lest you forget the things your eyes saw.”

The Jews in France have a shorter version of this exhortation:

“N’oublions pas,” or lest we forget.

The Jews have a long memory. It’s time for us to develop one too.

We need to retain in our collective national memory the near-Apocalypse the nation is going through and the persons responsible for it. There was a time when we stood in long lines in order to live. That was bad enough, but today we have to wait in longer lines in order to die, pleading for a can of oxygen or a hospital bed. It doesn’t end there – we also have to wait in line to be cremated or buried, three to a pyre or grave. This is not the tryst with destiny Nehru had promised us, nor the acche din on the promise of which the present incumbent came to power.

The disembowelment of the economy, the rendering of our social fabric, the defenestration of all constitutional values and bodies, the failure to protect our borders, the dumping of tens of millions back into the abyss of poverty from which they had just clambered out, the lying, hating and sporadic killing – all this in the first six years of this government – was bad enough. But it all pales into insignificance compared to what this regime is doing now.

Also read: Parallels Between India’s Mishandling of COVID and the Chinese Incursion in Ladakh

Walking the ramp in Davos instead of checking out the hospitals in his own country, preening with peacocks instead of holding meetings of the COVID-19 task forces, preparing for elections instead of the second wave, spending billions on vainglorious projects such as the Central Vista and a private jet instead of ramping up vaccine production, listening to ‘Coronil’ quacks instead of the best scientific minds, and reminding us of the NRC “chronology” instead of pursuing the coronavirus’s genome sequencing. Anyone could have seen that this was a recipe for armageddon, anyone, that is, but the Supreme Leader and his Sancho Panza, blinded by their lust for power and their troglodyte followers lobotomised by a toxic scalpel. We will never be allowed to know the actual extent of the enormous suffering the nation is going through today. The administration is on full drive to fudge, conceal, deny the number of COVID-19 infections or deaths. According to most credible international institutes, the genuine numbers are between 10 and 15 times what the government is reporting. That would mean at least 3 million infections and 40,000 deaths every day – and we are yet to hit the peak.

Instead of accepting this with humility the government is putting out false narratives about similar number of deaths in the USA and Europe last year. Like most of its propaganda this too is a package of lies. In most countries (except those like Brazil, whose Jair Bolsonaro is Narendra Modi’s twin in every respect) the people died of COVID-19 – of the virus – and not because of lack of oxygen, ventilators, hospital beds and vaccines. And by the time the second wave came they had prepared themselves to receive it.

Our government spent that time on patting itself on the back, turning a deaf ear to experts, growing beards, locking up journalists and ramming through parliament laws that no one wanted.

India has not suffered so much since the Bengal famine of the 1920s; then it was the British who caused it, today it is our own elected government.

A country which is the “vaccine factory” of the world has been reduced to begging for vaccines and oxygen. Modi has made us a nation of beggars, global mendicants and pall bearers, while he himself demands votes as a matter of right and lectures us on how to become self-sufficient, “atmanirbhar“. Instead, we are now “parmatmanirbhar” and left  to the mercies of a god who may or may not reside in in the statues and temples we are spending billions on.

The prime architects of this cataclysm are, of course, the Deadly Duo who may not be named, who thrive on the misery and pain of citizens. But they are not alone in bringing this nation to its knees: they have been ably assisted by a whole host of willing collaborators, the pilot fish and parasites who attend on behemoths, picking the crumbs from their insatiable jaws.

We must not be shy of identifying them. The three previous Chief Justices of India who betrayed their office and their oath, the Election Commissioners who sold not only their bodies but also their souls for yet another piece of offal; the officers of the CBI, Enforcement Directorate, IncomeTax, and the Delhi police whose excesses need to be documented.

Along with this a CAG who is more adept at redacting than auditing; the malevolent monk from Gorakhpur whose sheer savagery would make us question which type of God he worships; the media moghuls and anchors who, for a few pathetic crores of advertising, hid the truth from the citizens and encouraged the rampaging monsters to greater depths of depredation; a Solicitor General who lied through his teeth every time he stood up on his legs – whether about migrants, oxygen availability or incarcerated journalists. There are the cringing Cabinet ministers who preferred a bungalow in Lutyen’s Delhi to a place in history; the heads of corporate hospitals who spent the last one year in padding hospital bills of dead patients instead of setting up PAS oxygen plants for the surge everyone knew was coming; the complicit bureaucrats who stabbed a nation in the back for an extension or a comfortable sinecure, and the BJP spokespersons who continue to spout arrogance instead of empathy on every primetime show. 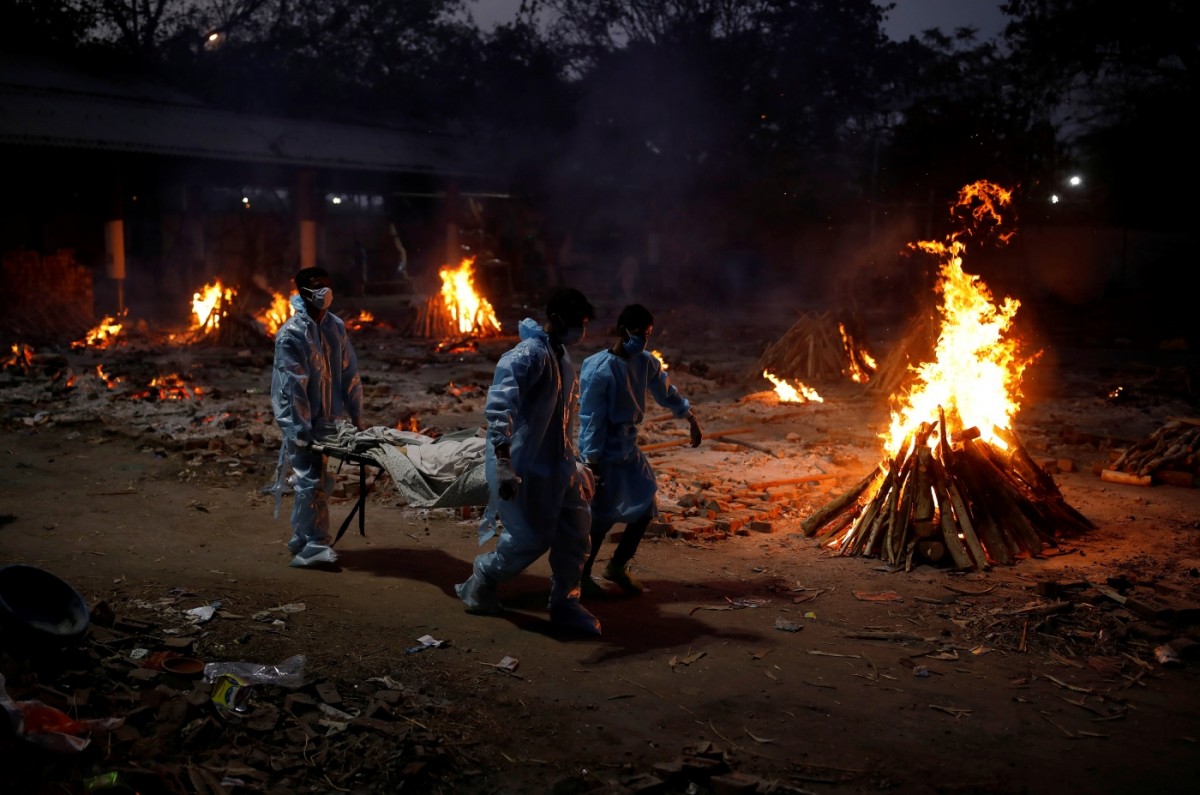 People carry the body of a man who died from COVID-19 at a crematorium in New Delhi, May 3, 2021. Photo: Reuters/Adnan Abidi

We must remember the CJI Bobdes and Sunil Aroras, the Arnab Goswamis and Ravi Shankars, the Prime Minister Narendra Modi and Union home minister Amit Shah, the Union health minister Dr. Harsh Vardhan and ICMR chief Dr Balram Bhargava, the Amit Malviyas and Tejashwi Suryas, the Smriti Iranis and Sadhvi Pragyas, and ask whether they bear any culpability for turning the nation into a purgatory.

Dozens have already died for want of oxygen supplies, prompting one high court to say that the government has “blood on their hands,” and another to term it as a “genocide”. In response, our external affairs minister, having failed miserably in his own domain on all fronts, dismisses this as democracy at work!

The sheer callousness and insensitivity of our ‘leaders” is beyond belief.

We should remember each and every one, as the Israelis remember those who tormented them.

A nation can grow only if it has a long memory, of the good times and the bad. As Ashwani Kumar quotes in an article in The Wire, “The struggle of man against power is the struggle of memory against forgetting,” for that is the only way that the excesses of power is called to account.

In an ideal world, when the age of reason returns, these people should be held to account for what they have done to a once proud nation, for the millions of deaths, the biblical scale of suffering they have inflicted on a people who trusted them. That however is unlikely to happen for we are still the land of Buddha and Mahavira. But this must change in the crucible of grief and agony which is the India of today. Their names and their deeds should be recorded for posterity so that later generations never again make the mistake of trusting a Caligula in the guise of a Pied Piper.

We should never forget – or forgive.