Not only is there disparity in salary, an inherent and punishing hierarchy, but pre-existing taboos and systematic devaluation of care work is likely to hit us particularly hard in this crisis. 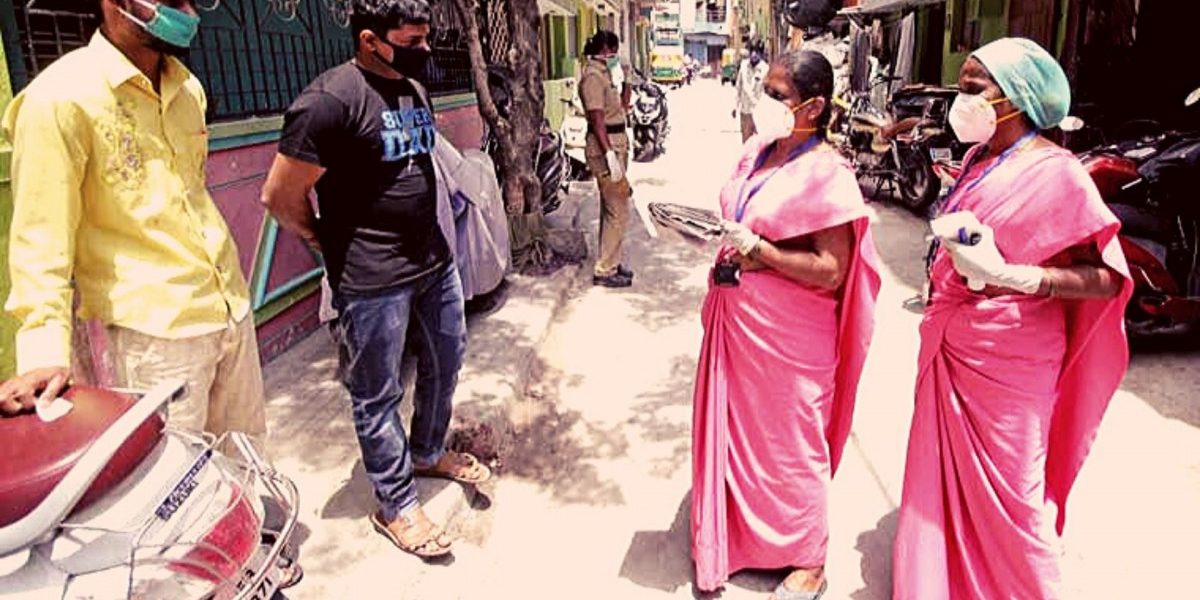 In the last few days, disturbing news about care workers and doctors getting infected by COVID-19 have been reported from across India.

On April 3, 50 medics had tested positive. The numbers have exponentially increased since most of them are working without basic protective gears.

As of April 17, at least 600 medics in Delhi, 160 in Mumbai, 50 in Rajasthan have been affected. However, the real numbers are expected to be much higher. Moreover, these numbers don’t include primary health care professional like ASHA, ANM and Anganwadi workers on COVID-19 duty.

Care workers have also raised the issue that they are being treated as dispensable. For instance, primary health workers fall under the ‘least-risk’ category for protective gear distribution despite being tasked with door to door surveys.

In several places, doctors have been accommodated in comfortable hotels while nurses were provided overcrowded and dirty rooms or simply denied accommodation.

Government plans are oblivious to the realities of care workers despite them being tasked with vital roles. Several care workers face threats of eviction and aggression from neighbours. They are not being provided with transportation and food despite the lockdown.

Thus they are often being forced to skip meals and commute at odd hours on deserted roads, sometimes on foot. To add to the injury, primary health workers have not been issued travel passes. This not only affects their ability to do their job but also exposes them to police violence. There are even reports of them being chased out by communities during routine surveys.

Nurses are being forced to work continuous shifts and their leaves are being cancelled. Even when there are visible symptoms, they are not getting tested. As a result, when they fall sick, they either have to exhaust their sick leaves or take a loss of pay.

Primary health workers are even more vulnerable since they have almost no access to social security such as health benefits, leaves, etc. as they are “volunteer workers”.

In spite of these roadblocks, their demands are focused on access to necessary protective gear. They do so by pointing out the dangers that can befall upon others rather than using a narrative of self-preservation. Perhaps a reflection of how little we care about our care workers.

As the popular narrative heralds them, health care workers are indeed our frontline warriors. Out of all health workers, a sizable section (nearly 30%) consists of nurses and midwives. This figure excludes nearly 1 million primary health workers. Here is an estimate: 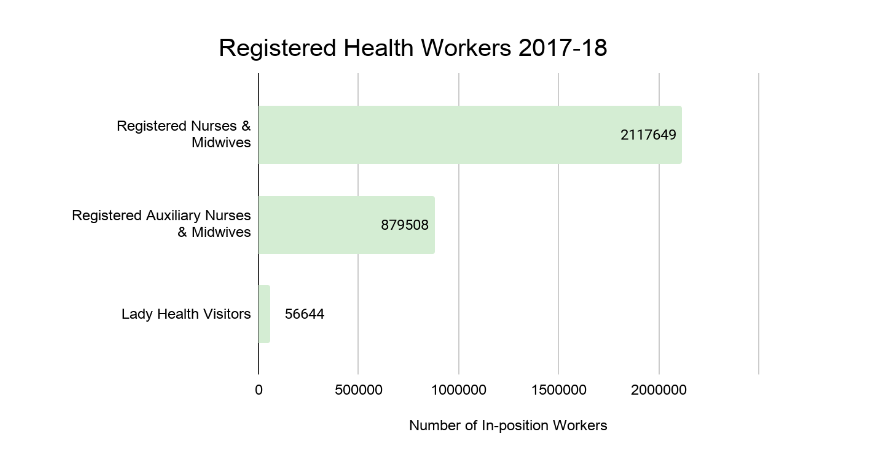 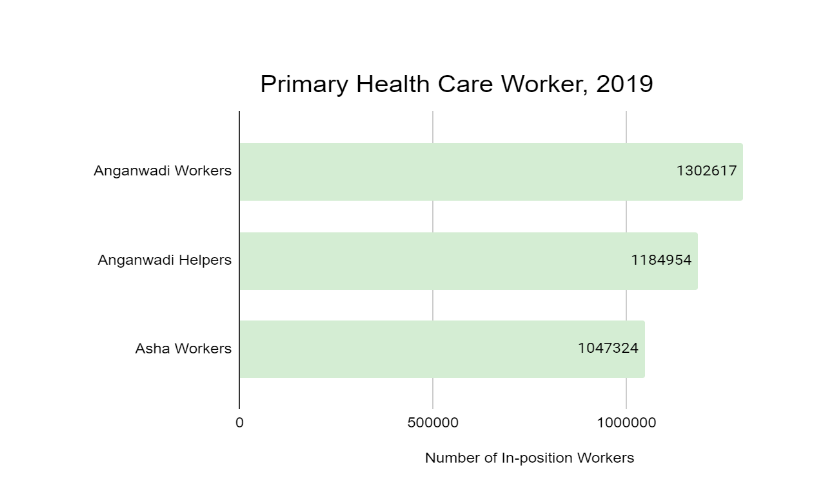 On January 31, a day after the first COVID-19 case was reported in India, the Directorate General of foreign trade imposed a ban on the export of all medical protective gear.

India continued to export medical protective equipment as late as March 29. What is even more bizarre was that Minister of Textiles, Smriti Irani, while acknowledging the shortage of PPE insisted on centralising procurement of PPE through one government-owned company.

Despite being contacted by several PPE manufacturers in February, the government did nothing until March 21. Even without reading too much into the situation, it seems rather counterintuitive.

In order to mitigate the damages of their erroneous actions, the Ministry of Health and Family Welfare issued a press release on March 30 informing that 11 domestic manufacturers are going to be making PPE.

The Ministry of External Affairs is also in the process of importing 30 lakh PPE kits from Singapore and Korea in the second week of April.

However, this news was far from reassuring for multiple reasons. First, there have been several reports of the USA diverting PPE and testing kits meant for other countries, including India. Thus until these PPE kits arrive, it remains shrouded in uncertainty. Second, it is far too inadequate. Third, it remains unclear whether the safety needs of nurses and primary health workers will find primacy in the usage of these kits.

The baggage of history

The real reason for that perhaps lies in the history of this profession. Care work has been dominated by women globally, perhaps a result of the traditional binary which associates women with care (nursing) and men with cure (doctors). This has led to devaluation and feminisation of care work.

Even though it is intellectually, physically, and emotionally demanding; it is perceived as unskilled labour. Within the Indian context, apart from gender, this difference in the value is also mediated by caste.

This hierarchy can be traced back to our inheritance of untouchability and colonial past. Care work is seen as “impure” since it requires physical proximity and touch.

Thus, women from minority communities have historically dominated this profession. Given its roots in missionary work, it is often perceived as a divine calling rather than a profession.

As a result, this valorises the hardships associated with care work. This takes away legitimacy from their claims to labour dignity and rights. Overall, there is an implicit expectation of docility and deference from care workers.

With the rise of global demand for nurses, there has been a moderate increase in women from more dominant communities. This coincides with a further widening of wage.

Some nurses make less than Rs 4,000 working in private institutions, whereas the in-hand salary for a staff nurse with a basic GNM degree working in a government hospital located in a Tier 1 city would start at Rs 64,000. There have been several protests and legal petitions by nurses to standardise wages.

In contrast, ASHA workers get an honorarium of Rs 2,000 to Rs 4,000 per month, which varies from state to state. Even with this meagre salary, the onus to pay for travel and stationery is on them. Anganwadi workers earn between Rs 2,250 and Rs 4,500 and Anganwadi helpers between Rs 1,500 and Rs 2,250 per month.

They have organised several protests and been assured by the government of a raise in 2018. However, this promise is yet to materialise; in fact, many have not received their wages for several months.

This disparity in the salary, inherent hierarchy, pre-existing taboos and systematic devaluation of care work has led to chronic under-staffing and adverse working conditions.

Institutional support, such as the provision of transportation during night duty, paid sick leaves, and so on, have also been lacking. They are often not involved in decision making or leadership roles.

High pressure of work and expectation of deference have made it exceedingly difficult for care workers to organise and demand better working conditions. To make matters worse, nursing is categorised as “essential services” under the Essential Services Maintenance Act, 1968.

This Act gives the government the power to prohibit strikes in sectors deemed as essential services. The baggage of history is perhaps most visible in how care workers are being valorised, while their justified and essential demands are being completely sidelined in the current battle against COVID-19.

A moment of reckoning

COVID-19 has been a moment of reckoning on how crucial care work really is to the functioning of our society.

A majority of our healthcare professionals work in perilous conditions for paltry wages with little to no right to occupational safety.

Besides, they are rarely involved in decision making. It is perhaps telling that India’s total health care spending (3.5 % of total GDP, 2017) is the lowest among the BRICS country.

Given years of short-sighted planning, inadequate policy and increasing pressures of neoliberalism, care work was already in a state of crisis as evident from several protests to increase and standardise wages. But the government failing to recognise and protect our frontline of defence at this moment of crisis will have a catastrophic effect on our survival of this pandemic.