Of the many people struggling to prove their citizenship in the Indian state of Assam are thousands of climate refugees who have been displaced because their lands have been swept away by erosion or floods. 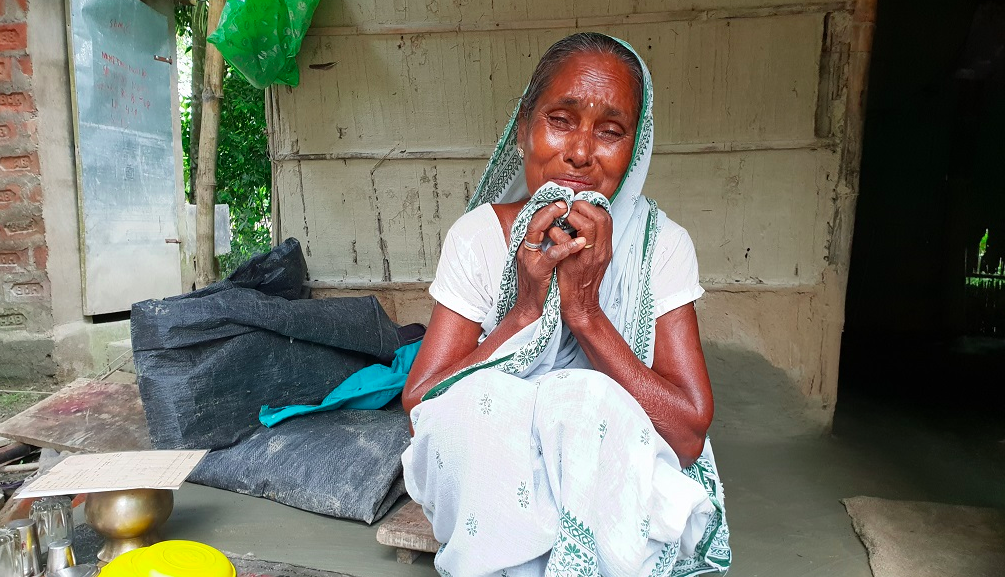 Sabita Biswas reduced to tears as she worries about her grandchildren excluded from citizenship. Photo: Chandrani Sinha

In Bhuragaon, a small village that lies 103 kilometres east of Guwahati, the capital of Assam in north-eastern India, Sabita Biswas worries about her grandchildren. The 70-year-old has submitted land ownership documents under her husband and father-in-law’s names, but these have been rejected, because the land is no longer there, swept away by the mighty Brahmaputra River.

A widow who has lost her two sons, Biswas used to work as a domestic helper in Bhuragaon, and is among the marginalised that have neither the expertise, nor the money, to effectively argue their case. The only breadwinner in her family is her daughter-in-law, who works as a domestic helper across the river. Biswas is now going from door to door to find help for her grandchildren.

The National Register of Citizens (NRC), an initiative to document those with valid citizenship documents in Assam, has a long history. A series of anti-migrant agitations over six years led to an agreement called the Assam Accord in 1985. One of the main clauses of this accord was that anybody who had entered the state “on or after March 25, 1971” would be detected, disenfranchised, and expelled. The NRC was set up to process this documentation, assisted by a number of foreigners’ tribunals, whose judges pored over the documentation that would prove a person, or their parents, had been resident in the state before the crucial cut-off date.

When the NRC came out with its final list this September, having gone over the documentation of over 33 million people, 1.9 million were found to have unsound documentation. While the people technically have 120 days to appeal the decision, it is a difficult process. India has assured Bangladesh, where the migrants are assumed to have arrived from, that it will not impact Bangladesh, which may mean that there will be no deportations there. Detention camps are being built for those whose citizenship is now under question, some being built by the very people who may be housed in them.

It is for good reason that Biswas worries about the future of her grandchildren, but she does not know what to do. “I submitted my land ownership document which was in my husband’s and father-in-law’s names, but NRC didn’t accept it even though we used to pay taxes for the land which is now under water,” she said.

Under the Indian legal system, it is the duty of the local revenue department office to maintain records of homesteads, agricultural land, vacant land, waste land, government land and land marked for industrial development. In the NRC process a person has the option to show pre-1971 land ownership documents with links to the ancestor who figures in the document as the owner. Thus, old documents have become key to establishing citizenship. When these documents are missing, or have small mistakes, or if the land itself does not exist anymore, it can have a massive impact.

“We have lost our land in erosion. Earlier we were on the Arakati Char (a riverine island on the Brahmaputra). When our village went under water we migrated to this place, Bhuragaon. Every year flood takes away everything from us, including documents,” said Biswas with tear-filled eyes.

There are thousands of families who are badly affected by floods and erosion in Assam. This has been the case for centuries, but the rates of erosion and floods have gone up due to climate change, so there are more climate refugees now. Their forced move to new areas has led to these climate refugees being seen as “intruders”, possibly foreigners.

“Almost 40 villages in the Bhuragaon circle have been lost due to erosion. When the world is moving forward with technology we are going backward in isolation because of our geographical location, with erosion pushing us towards lack of health amenities, education, transport, and now [having to prove our identity for the] NRC,” said Photik Chandra Mondal, a member of the locally elected village body.

According to the Economic Survey of India, 10% of the country is flood prone. In Assam, this becomes approximately 40%, or 931,000 hectares. “The scale of the problem has grown with massive erosion, which stands at an average rate of 8,000 hectares every year in the state with a total of 427,000 hectares of land having been washed away since 1950,” according to Assam’s minister in charge of disaster management. He also said that from 2010 to 2015, 880 villages were completely lost due to erosion, 67 villages were partially lost, and 36,981 families lost their homes.

With the loss of land, and a growing population, the pressure on the remaining land has grown savage, and migrants of whatever sort, whether illegal immigrants, or those displaced within the state, are looked at with suspicion. In a state overwhelmingly dependent on agriculture, those without land have few livelihood options. The economic desperation has led to Assam becoming a hub of child and women trafficking. These are among the people now desperately trying to prove their citizenship.

“If a family has shifted internally within Assam after losing land, we have seen that the foreigners’ tribunals have declared them foreigners since the tribunals did not trust documents of different villages. The tribunals in several judgements felt that the people are different despite having the same name, since some of their documents would be from one area and some other documents would be from other area. There is no justice for those climate victims,” said Aman Wadud, a lawyer helping people fight their cases in the tribunals.

An atmosphere of mistrust

The situation has created mistrust between mainlanders and those staying on the chars (riverine islands) or on the banks of the Brahmaputra, the transboundary river that starts in Tibet and flows right through the Assam valley before entering Bangladesh. In the majority of cases poor Bengali speaking people are the ones living on the chars and the riverbanks, and they are easily targeted as “Bangladeshis” or illegal immigrants.

One activist in the area, Santanu Sanyal, the president of the All Assam Bengali Parishad, told thethirdpole.net, “Sudden [impacts due to] climate change and floods [coming without warning] in the last few years have done more damage to the poor people staying in riverside areas. And the hot weather [in which temperatures have increased] doesn’t allow them to work continuously in their agricultural lands. This has made the poor people poorer and now when they have nothing left, their names are not there in the NRC. Going to foreigners’ tribunals to fight a case also needs money.” But that is the only legal course left to such people.

Similar tales can be found in the village of Sarabat Ali, 58. He and his family in Goroimari village of Assam – located 100 kilometres from Guwahati – are extremely worried. They migrated from Belbheli village in Nalbari district of Assam. For almost 12 years they have lived on the embankments constructed by the Assam government on the Brahmaputra riverbank. Now Ali has been denied citizenship status, because when they migrated, his father’s name was listed as Kota Ali instead of Ansar Ali. Now the family is being told that they cannot claim relation to the man.

“Due to migration from that area to this, this problem arose. Because of the fault in my name 12 members of our family are denied NRC,” said Sarabat Ali’s octogenarian father.

“Already we are erosion- and flood-hit people, we don’t own land. How will we pay lawyer’s fees for the foreigners’ tribunal?” asked Sarabat.

In similar circumstances Mazeda Begum and her husband Kuddus Ali settled on land provided by the government in the Kamrup area of Assam. Their land in Champupara village under Goroimari circle had been washed away.

“We have provided our previous land document in my husband and son’s name but that didn’t help,” said Mazeda Begum. “My husband is a daily wage earner; we don’t have the money to go to tribunals now.”

“Those people whose land and homes [have been lost to erosion and] become internally displaced, the moment they move to a newer area in search of livelihood they become soft targets and prime suspects. [They are] often branded as illegal immigrants. The strong correlations between climate change, river erosion and flooding has always been underplayed in the illegal migration discourse in Assam,” Wadud said.

This article was originally published on Third Pole and has been republished under a Creative Commons licence.