The protest in Khumulwng, the headquarters of Tripura Tribal Autonomous District Council, on January 8. 2019. Credit: PTI

New Delhi: Aside from the massive protest in Assam against the Centre’s decision to amend the Citizenship Act the tribal dominated areas of Tripura too have registered widespread demonstrations against it, leading to police firing on protesters and a ban on internet services for the last five days.

The amendment moves to grant Indian nationality to Hindu Bangladeshis who entered the country till December 31, 2014.

The frontier state’s tribal population, affected by migration of refugees from East Pakistan during Partition and later during the Bangladesh Liberation War, are opposed to the amendment as it could further affect the population composition of the state.

Various groups, including the Indigenous People’s Front of Tripura (IPFT), a partner in the state government, have already been demanding a tribal state sliced out of Tiprasa dominated areas based on the argument that they have become a minority in their homeland. While the BJP initially supported the IPFT demand in the run up the last assembly elections, it later backed out keeping the majority Hindu Bengali sentiments in mind.

According to media reports emerging from the state this past week, on getting confirmation that the Narendra Modi government would pass the Citizenship (Amendment) Bill, 2016, in the Lok Sabha on January 9, the North East Students Union (NESO) called for a 12-hour bandh across the Northeastern states on January 8.

The bandh was observed in the tribal dominated areas of Tripura – ;ocal reports said protesters came out to the streets shouting slogans against the Bill in Khumulwng, the headquarters of Tripura Tribal Autonomous District Council (TTADC), situated about 25 km from state capital Agartala. They reportedly also pelted stones at the security forces.

The police clamped Section 144 and asked the protesters to leave. On refusing to do so, the Tripura State Rifles (TSR) personnel reportedly opened fire at them, leaving at least 15 persons injured, including six with bullet injuries.

Videos of police firing on the protesters and alleged beating of the injured persons while being taken in an ambulance to the hospital by security personnel have since been circulating on social media, leading to widespread public outrage in the tribal areas.

The state then put a ban on internet services.

Six leaders of NESO, including the advisor of All Assam Students Union (AASU), Samujjal Bhattacharjee, were thereafter stopped at Agartala and barred from travelling to Khumulwng.

In protest against the police firing, yet another bandh was called on January 12 by a number of tribal groups, including the IPFT-Tipraha, a breakaway faction of the BJP partner IPFT, Indigenous Nationalist Party of Twipra (INPT) and Twipra Students Federation (TSF) among others. Local reports said a rally against the Bill was organised in Sadhupara area of TTADC where protesters raised slogans against Prime Minister Narendra Modi, the chief minister Biplab Deb and the BJP national president Amit Shah for passing it the Lok Sabha. Picketing was reported from other areas of the TTADC too while educational institutions and government offices remained closed. 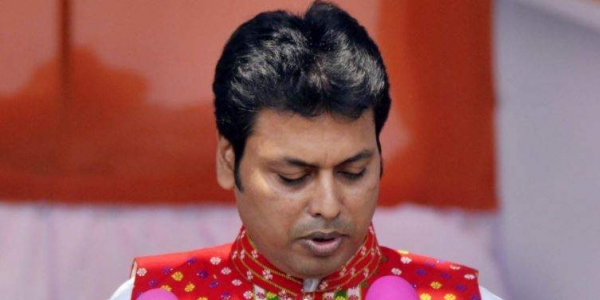 These groups demanded the resignation of the chief minister over the firing on “unarmed innocent people”, a judicial probe into it headed by a sitting high court judge besides Rs 20 lakh as compensation or a government job to the families of the injured youth. INPT general secretary Jagadish Debbarma told reporters in Agartala that the BJP government opened fire on “unarmed innocent people while they were protesting against the Bill in a democratic manner.”

Former chief minister Manik Sarkar visited the TTADC areas on January 14. Speaking to reporters, he said, “A lot of shops were burnt, damaged in Madhabbari and other areas in Jirania sub-division. People, especially women, are traumatised. Except one, all those shot during the protest sustained bullet injuries on their back, indicating that they were running away. I think firing on them was perhaps not necessary.”

Sarkar also supported the demand for a probe by a sitting high court judge. However, earlier in the day, the state administration ordered a magisterial inquiry into the firing.

Speaking to reporters about the bandh, BJP spokesperson Nabendu Bhattacharjee accused the CPI-M of “conspiring against the state government”.

The Congress too has offered its support to the January 12 bandh. Party’s working president Pradyot Debbarman, who also belongs to the erstwhile royal family of Tripura, told The Wire, “Tripura and the Northeast will not be dumping ground for people from Bangladesh. If the Centre is so concerned about them, then they can make provisions for them in some other states but not in the Northeast where smaller communities reside. This is not a political fight but of our existence.”

Debbarman has filed a petition in the Supreme Court recently seeking a directive to create a National Register of Citizens (NRC) in Tripura akin to Assam. His move has made him unpopular within his party too.

In a recent party meeting in Agartala, a video of which was leaked in the social media, Debbarman, in his speech, offered to resign from his post if some leaders in his party didn’t support him in his demand for an NRC. He said that the petition was not against Bengali Hindus, but against Bangladeshis.

Meanwhile, reports said, following the January 8 firing, a large number of TSR and Central Reserve Police Force (CRPF) have been deployed in the TTADC areas.