The US Commission on International Religious Freedom described the Bill as a “dangerous turn in the wrong direction”. 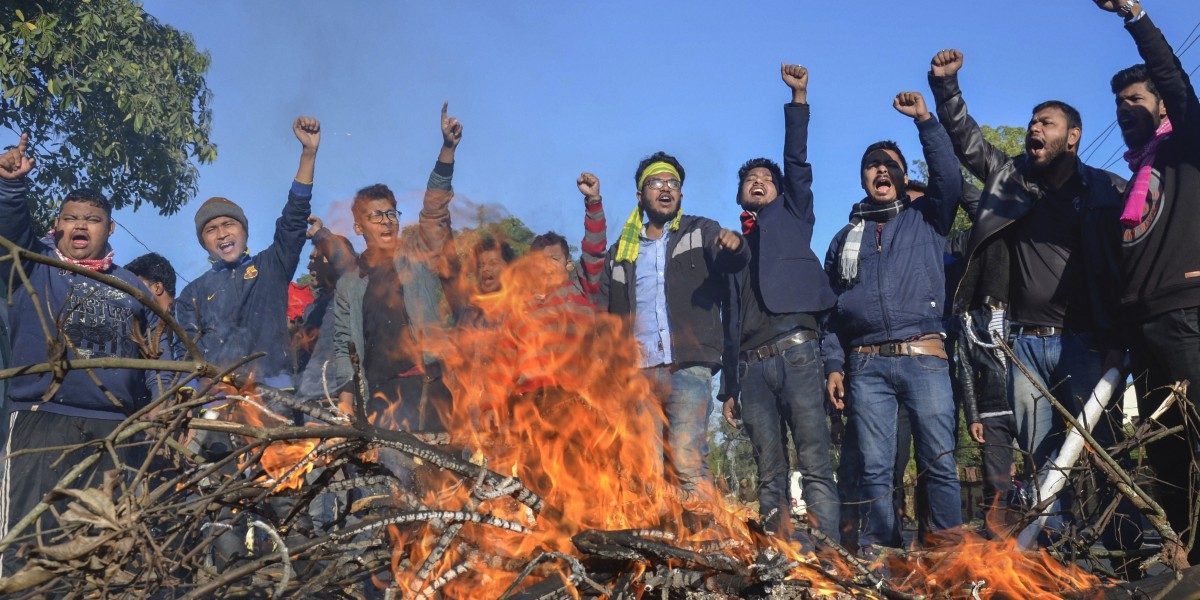 Protests in Assam over the Citizenship (Amendment) Bill. Photo: PTI

New Delhi: The passage of the Citizenship (Amendment) Bill (CAB) by India’s lower house of parliament has led to a US congressional panel raising concerns about whether India and the US share core values. A federal US commission has also proposed sanctions against India.

On Monday night, the Lok Sabha passed the CAB with a large majority of 311 for and 80 against.

Within a few hours, the US House Foreign Affairs Committee (HFAC) tweeted concern that the Bill “undermines the most basic democratic tenet” of religious pluralism. The panel pointed out that any religious test for citizenship would be contrary to religious pluralism which was described as “one of our core shared values”.

Religious pluralism is central to the foundations of both India and the United States and is one of our core shared values. Any religious test for citizenship undermines this most basic democratic tenet. #CABBillhttps://t.co/7wyeXMFfxl

In October, HFAC’s sub-committee had held a hearing that had criticised India’s actions to restrict communications and access to outside observers in Kashmir, following the reading down of Article 370.

When co-chair Democrat Brad Sherman sought a clarification on whether there was a Bill in the Indian parliament that seeks to discriminate against Muslims on the issue of citizenship, assistant secretary for the Bureau of Democracy, Human Rights and Labour Robert Destro acknowledged that it gives a presumption of citizenship to some religious groups and leaves Muslims out.

Sherman had then asked on October 22 whether the US had condemned the CAB. “We are doing it right here. This is a good opportunity to do it,” Destro said.

Then Republican lawmaker Ted Yoho had sought to know whether some religions were being discriminated against in India unfairly. Destro answered that while religious groups were not legally discriminated, there was pressure to make special rules for Muslims for which the US administration was “calling them out”. “India’s constitution provides for secularism and we want the same to continue,” said Destro, less than two months ago.

The US Commission on International Religious Freedom (USCIRF) has also raised serious concerns about the passage of the Bill tabled by home minister Amit Shah in the Lower House. “If the CAB passes in both houses of parliament, the United States government should consider sanctions against the Home Minister and other principal leadership,” said the USCIRF statement.

The federal panel described CAB as a “dangerous turn in the wrong direction”. “It runs counter to India’s rich history of secular pluralism and the Indian Constitution, which guarantees equality before the law regardless of faith.”

The commission raised alarm bell that the CAB would be used along with the National Register of Citizens process to remove legal rights of millions of Muslims. “In conjunction with the ongoing National Register of Citizens (NRC) process in Assam and nationwide NRC that the Home Minister seeks to propose, USCIRF fears that the Indian government is creating a religious test for Indian citizenship that would strip citizenship from millions of Muslims,” it cautioned.

Ministry of External Affairs spokesperson Raveesh Kumar responded by saying that the USCIRF’s statement is “neither accurate nor warranted”. “The Bill provides expedited consideration for Indian citizenship to persecuted religious minorities already in India from certain contiguous countries. It seeks to address their current difficulties and meet their basic human rights. Such an initiative should be welcomed, not criticised by those who are genuinely committed to religious freedom,” Kumar said.

“Neither the CAB nor the National Register of Citizens (NRC) process seeks to strip citizenship from any Indian citizen of any faith. Suggestions to that effect are motivated and unjustified. Every nation, including the United States, has the right to enumerate and validate its citizenry, and to exercise this prerogative through various policies,” Kumar continued. “The position articulated by USCIRF is not surprising given its past record. It is, however, regrettable that the body has chosen to be guided only by its prejudices and biases on a matter on which it clearly has little knowledge and no locus standi.”