Chidambaram Arrest: 100 Days and Counting, Yet What Has Been Proven?

Many glaring inaccuracies in both the CBI and the ED’s contentions point to a shoddy, hasty job done at the instructions of their political masters.

It has been 100 days since the made-for-television arrest of former home and finance minister Palaniappan Chidambaram in the INX-Media matter.

The first 58 days were spent in police and judicial custody of the Central Bureau of Investigation (CBI), for custodial interrogation. This has been followed by Enforcement Directorate (ED) custody, where he is at present in Tihar Jail. The Supreme Court has granted him bail in the CBI case and has reserved its judgement in the ED matter. His bail application has so far been refused five times between the Supreme Court and the Delhi high court.

These are logical questions that must be raised and answered.

Also read: The ED, CBI Role is Unsurprising in Bail Denial to P. Chidambaram, Not So the Courts

Let us rewind to October 22 when the Supreme Court gave the former minister bail in the INX-Media case lodged by the CBI, where it did not just reject every objection raised by the agency but also asserted there was ‘no whisper’ of any evidence that Chidambaram had tried to influence even one witness.

Interestingly, earlier, the Delhi high court, despite denying bail, had already ruled out Chidambaram being a flight risk or influencing witnesses – the other two tests for bail. But the apex court’s bail brought no respite because the ED had taken P Chidambaram into custody on October 17 itself.

The CBI has prepared a chargesheet laden with contradictions and the ED has also submitted a sealed probe report before the Supreme Court. But it’s the nature of arguments and assertions made by both agencies across court rooms that makes one question their integrity and independence.

From fictitious witnesses who were never confronted to bizarre submissions by the government counsel Solicitor General Tushar Mehta, who on one occasion insisted that Chidambaram had to be in custody because “he is highly intelligent” and at another time argued that the jailed Congress leader could influence sovereign nations where letters rogatory have been sent.

The charges aren’t consistent either. Almost 29 months after its FIR which alleged a bribe of Rs 3.5 crore, CBI’s 56-page charge sheet, preceded by four raids, routine and custodial interrogation of both father and son, now mentions that figure as Rs 9.96 lakh.

This alleged bribe was paid by cheque after applying service tax and TDS to a consulting firm and has been included in its books of account! Chidambaram’s affidavit, filed just before his Rajya Sabha election in June 2016, reveals assets worth Rs 95.66 crore and liabilities to the tune of Rs 5.79 crore; Karti Chidambaram’s poll affidavit of 2019 values his total assets at Rs 79.37 crore and liabilities at Rs 17.69 crore. Allegations of a Rs 9.96 lakh in bribe to share with 13 other people would be laughable had it not been for the tragic investigation by India’s premiere investigative agency. 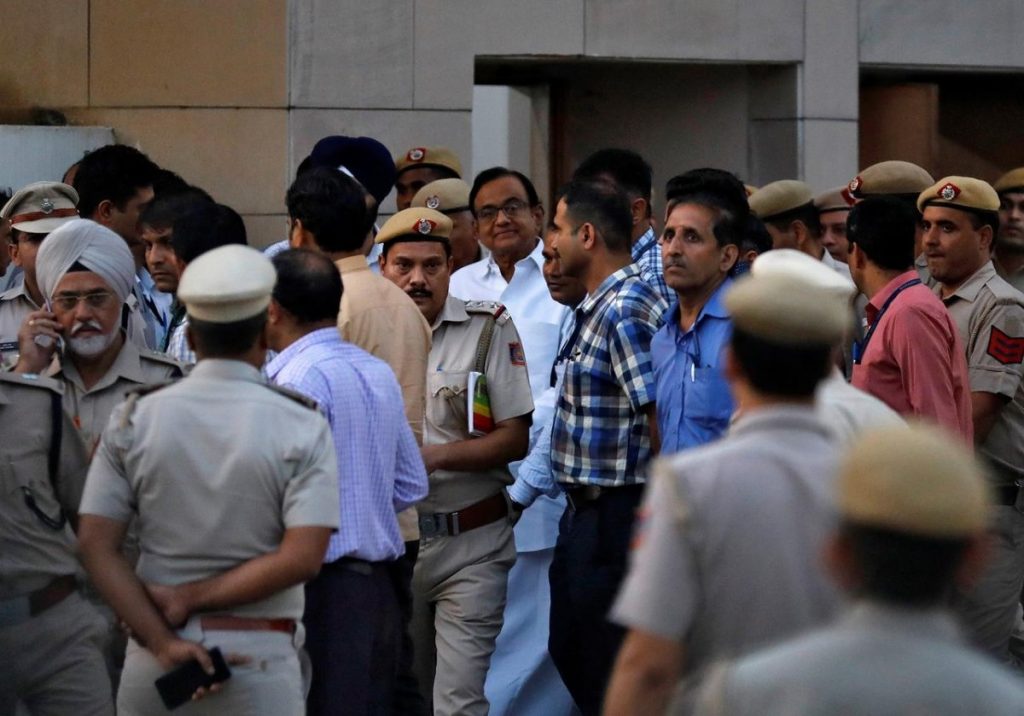 India’s former finance minister Palaniappan Chidambaram looks on as he leaves a court after a hearing following his arrest, in New Delhi, August 22, 2019. Photo: Reuters/Anushree Fadnavis

It has also been contended that the Foreign Investment Promotion Board (FIPB) had only approved 46.216% of INX-Media equity at a face value of Rs 10 per share as investment, but the company ‘deliberately and with a malafide intention’ issued shares at a premium and brought in over Rs 403 crore as FDI instead.

Elementary knowledge of business deals and foreign funds will explain two things – first, the FIPB approves a percentage of equity investment and not a value. Second, the price at which a share transaction happens is a function of market price and is at the sole discretion of the parties involved. So selling a share with a face value of Rs 10 each at a premium of Rs 862.15 per equity share is perfectly legal and a decision that neither the FIPB nor the government have any control over.

It has also been argued that INX Media allegedly evaded punitive measures since the company did not have necessary FIPB approvals to bring in a little over Rs 403 crore as FDI. But if that is so why has neither the RBI nor SEBI acted against alleged irregularities in foreign inflows during the last 12 years?

Ironically, the former finance minister has been accused of a criminal conspiracy but six secretaries in the FIPB who actually approved INX-Media’s FDI proposal have been completely exonerated. After all, Chidambaram as finance minister simply endorsed a decision taken by the board which comprised of some of the senior most bureaucrats in the government, including Dr Subba Rao – who later served as Governor of the Reserve Bank of India.

No quarrel with that.

But why selectively blame the minister or the secretariat of any wrong doing? The former simply endorsed the board’s collective decision and the latter merely put up the FDI proposal before them.

Some other glaring inaccuracies in both the CBI and the ED’s contentions point to a shoddy, hasty job done at the instructions of their political masters. No one, for instance, corroborates supposed meetings between Chidambaram and the Mukerjeas or those between his son and the now divorced couple.

Due to the lack of no bills, phone records, specific dates as evidence, these remain only vague unsubstantiated charges. In fact, while granting Chidambaram Junior bail on March 23, 2018 Justice S.P. Garg at Delhi high court had emphatically stated:

‘The said senior officers did not name any official in the ‘FIPB’ who was ever prevailed upon by the petitioner (Karti Chidambaram) or his associates to impact their decision’.

Meanwhile, not only has Chidambaram’s application during ED custody for interim bail on medical grounds been rejected, submissions by the agencies are inconsistent. ‘Multiple expensive properties and foreign account’ charge levelled against Chidambarams has varied from 17 accounts and 25 properties in one hearing to 10 undisclosed properties in the other – only to change to 12 in the last hearing.

One wonders if these incompatible claims expose incompetence or if it is a clever plot to mislead courts and malign public opinion. Quite often, overzealous TV reporters and anchors quote ‘top’ ED and CBI sources alluding to undisclosed overseas as well. Non-disclosure of income, assets and liabilities are grounds for immediate disqualification. Why then have political opponents not challenged the elections of both Chidambaram and his son, Karti?

There are other uncomfortable events that deserve to be questioned as well. Justice Sunil Gaur, who rejected Chidambaram’s anticipatory bail, was tipped to be appointed as chairperson of the PMLA Tribunal very soon after he retired. How could a law-loving judge like him reserve the bail cancellation order for seven long months if indeed the case was of ‘serious magnitude and Chidambaram was the kingpin’? The Supreme Court has now not just set aside the high court judgement but has also firmly stated, ‘findings of the high court in the impugned judgment shall not have any bearing either in the trial or in any other proceedings.’

Lastly, Indrani Mukerjea has been ‘pardoned’ and not named as an accused in the INX-Media case after she turned approver. But it is impossible to wipe out the memory of the fact that she is an accused and in custody for allegedly murdering her own daughter in cold blood – a case also being prosecuted by the CBI.

It is primarily her testimony which has been used to build a bogus case and imprison one of India’s foremost reformers, a man who has paid a heavy price for speaking truth to power, but remains undaunted.

It is not his ordeal alone that’s concerning, but a weak judiciary, pliable agencies and a blatant government’s unchecked vendetta which must raise alarm bells.