The Punjab Police has constituted a three-women special investigating team to probe the matter. 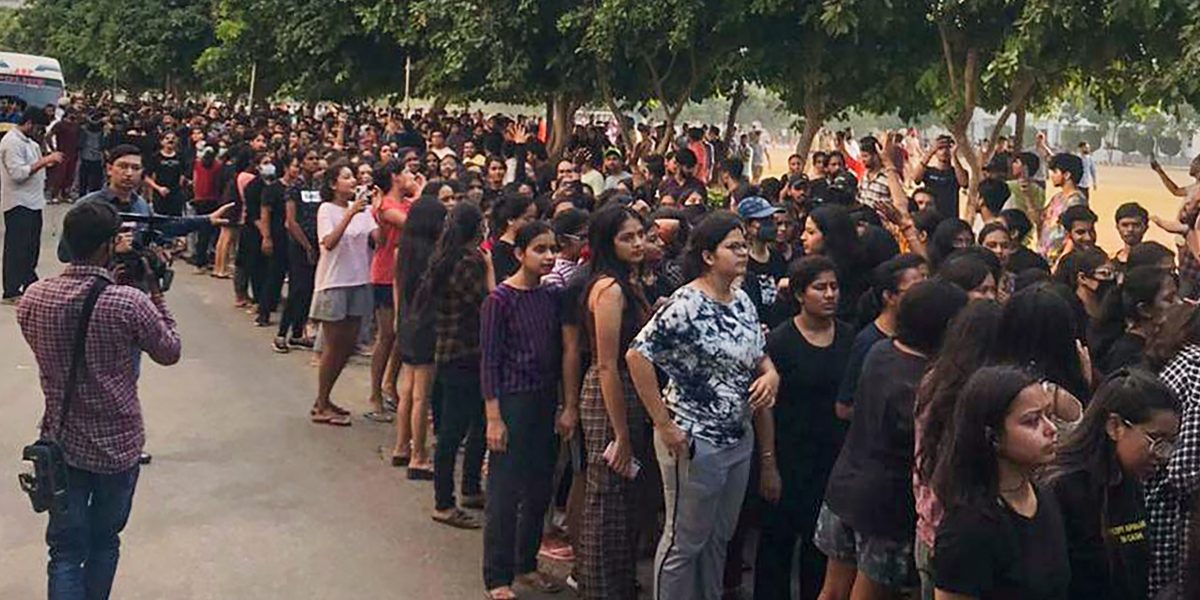 Jalandhar: Two days after alleged videos of female students of the Mohali-based Chandigarh University bathing were uploaded online, the varsity authorities suspended two hostel wardens, shifted other wardens and closed the campus by declaring non-teaching days from September 19 to 24.

The students claim that a female student of the university clandestinely recorded the videos, which she then sent to a man in Shimla – who uploaded them to the internet. The student and two men have been arrested in connection with the case.

The university decided to declare ‘non-teaching’ days for six days after a second protest was held by the agitating students on Sunday evening, which concluded at 1:30 am on Monday.

The protest ended after the students were assured by senior superintendent of police (SSP) Mohali Vivek Sheel Soni and deputy commissioner Amit Talwar of a thorough probe.

A committee that comprises both students and teachers was also formed to probe allegations that the university tried to hush the matter up. The authorities also tried to prevent the female students from protesting, they claim.

Under pressure from students, the university authorities suspended two hostel wardens and shifted others in a hurry. The students had complained that one hostel warden had forcibly deleted videos from the mobile phone of the accused student, which was not thoroughly probed.

On Sunday evening, the Himachal police arrested one accused and detained another. While Sunny Mehta (23), a resident of Rohru sub-division, Shimla was arrested and a second person named Rankaj Verma (31) was detained. The Punjab Police had lodged an FIR in this case under section 66(E) of the Information Technology Act and section 354C of the Indian Penal Code (IPC).

On Monday morning, DGP Punjab Gaurav Yadav said in a video statement that three arrests had been made in the case so far. “Certain electronic devices have been seized. I would like to thank DGP Himachal Pradesh and Himachal Police for extending all cooperation to Punjab Police in arrests made yesterday,” he said.

The DGP said that at Punjab chief minister Bhagwant Singh Mann’s directions, a high-level probe has been ordered. “We have constituted a three-member all-women Special Investigation Team under the supervision of senior IPS officer Gurpreet Kaur Deo to probe the case,” he added.

DGP Yadav also made two assurances to the students, parents and the community at large. “Firstly, we will respect the privacy and dignity of all individuals concerned. We will make endeavours to protect the privacy of the concerned people. Secondly, we will get to the bottom of this matter. We will investigate thoroughly and whoever is involved will not be spared.”

He also appealed to people to maintain calm and peace and not to pay heed to rumours. 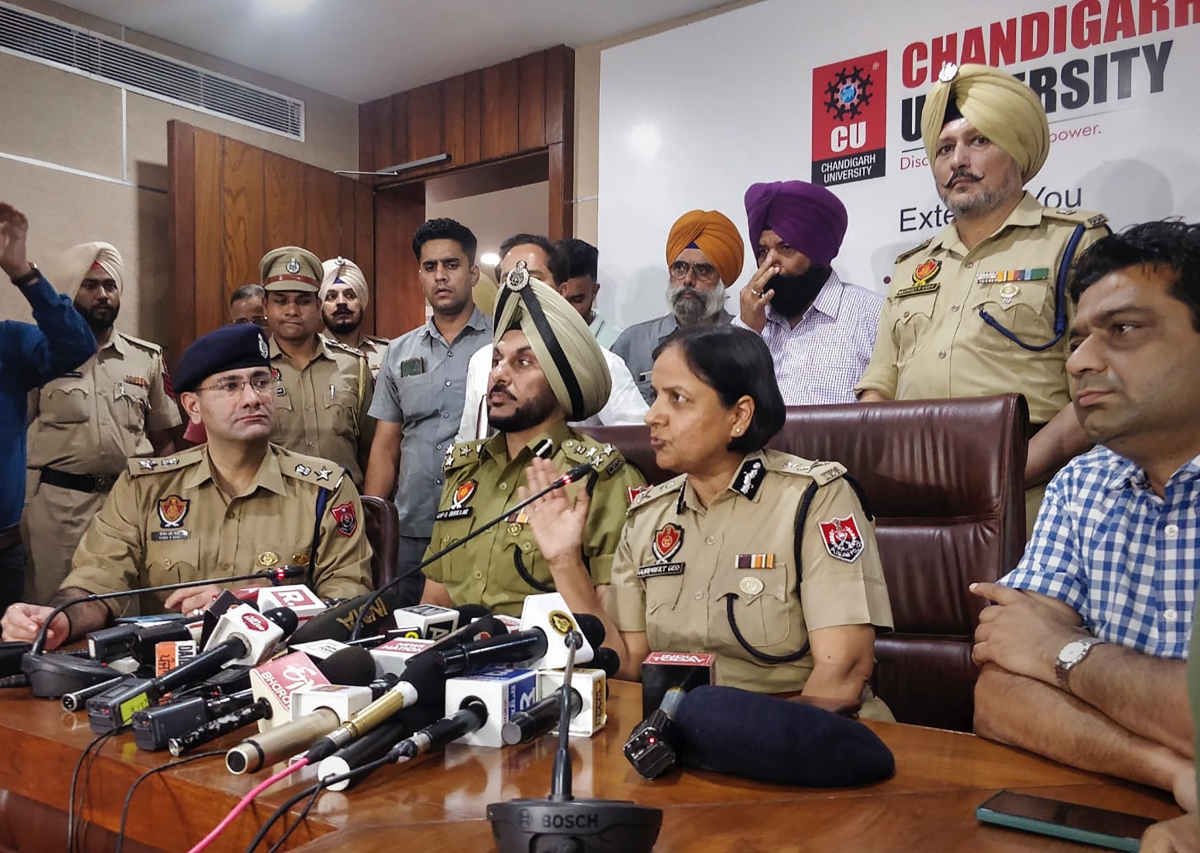 Amid the furore over the incident, the university authorities had arranged transportation for students from nearby regions like Haryana, Himachal Pradesh and Punjab to go home.

Shivam and Aditi, students who were going home, said that the campus will remain closed for a week. “Some students who belong to far-off places are remaining at the hostel,” they said.

Two other male students from Haryana, who were also heading home, said that the varsity authorities were concealing the truth. “They are trying to hide the facts. Though the university management agreed to some demands of the female students, we can say for sure that the accused student was making videos of her fellow hostel mates. We haven’t seen the viral videos but the matter is being hushed up,” they added.

Parents in a state of panic

Following the incident, panicked parents rushed to the university to take their children home.

The family of a female student arrived at the campus from Haryana. They said, “We got to know that a female student made videos of some other students while they were bathing. She sent the video to Shimla to her male friend, who uploaded it to the internet and made it viral. We learnt about other details of the case from newspapers the next morning. The atmosphere in the university is not good and I will see if my child will continue her education here.”

The father said that when he went to pick up his daughter, there was nobody on the campus for a security check. “Our children are not safe here. We also got to know that there are no CCTV cameras anywhere inside the campus. They have set up such a huge varsity but there is no lift to reach the seventh floor of a building. Students are forced to climb the stairs. Parents should take their children home,” the student’s father added.

Another family, whose seven children were studying at Chandigarh University, accused the university authorities of trying to hush up the matter over the past two-three days. “The university authorities should have acted within hours, but they focussed on brushing aside the entire matter. We will wait and watch to decide our next course of action,” they said.

Student unions of Panjab University in Chandigarh also joined the protest of the students of Chandigarh University.

Punjab Students Union (Lalkar) state general secretary Amandeep Singh said that they joined the students’ protest against Chandigarh University, Mohali on Sunday evening. “We spoke to some students and learnt that the university authorities had locked that hostel, where this incident took place while the girl students were still inside. They were not allowed to come out. The university authorities had put jammers on the campus and there was no wi-fi facility available. The rest of the students were asked to keep their mobile phones switched off but the students protested,” he said.

“Reportedly, some students saw the accused female student making the videos. And that was not the first incident. Instead of verifying the claims of the students, the university authorities and the Mohali Police tried to hush up the issue, which is highly unfortunate,” he added.

Students for Society (SFS), another students’ union, has given a call for a protest against Chandigarh University authorities on Monday (September 19) evening and urged the students to join them.