Can Himanta Biswa Sarma and Yogi Adityanath Be Tried for Crimes Against Humanity?

President Duterte of the Philippines was charged and is being investigated. Why not the chief ministers of Assam and Uttar Pradesh?

Himanta Biswa Sarma, Assam’s chief minister, recently said: “Someone asked me today if police shooting at persons who try to escape from custody has become a pattern. This should be the pattern if someone who is a rapist trying to flee after snatching arms from police, or someone who tries to escape while recreating a scene of the crime.”

The police, he continued, “shouldn’t shoot them in the chest, but the law permits shooting them in the leg. The police in Assam shouldn’t be scared of taking such action [against criminals], but no such action should be taken against innocent persons.”

Now who does this remind you of? Let’s look farther east—a long way from Assam.

Rodrigo Duterte assumed office as the president of the Philippines on June 30, 2016. Before being elected president, he had served six terms as the mayor of Davao City, the country’s third-most populous. Under his muscular and unforgiving leadership, the city experienced an economic boom and a significant improvement in the law-and-order situation.

Riding on his success in Davao City, Duterte ran for president and won. Under the constitution of the Philippines, his tenure ended in June 2022. A new president, Bongbong Marcos, is now in office. Duterte’s daughter Sara is the vice-president, and Duterte has announced that he is retiring from politics.

Let’s remember that Duterte had an approval rating of 67.2%, just before he left office. One of his most famous and controversial policies was the ‘War on Drugs,’ which he began while mayor of Davao city.

Also read: A Trail of Blood: Resisting Tyranny in the Philippines

He is also alleged to have been involved with the vigilante group called “Davao Death Squad”. During his tenure as mayor, he oversaw the killings of hundreds of individuals who were allegedly involved in drug deals or were drug addicts.

He once said, to a cheering audience, “You rape a child in my city? I will kill you, I have no problem with that. You commit robbery and rape your victim? I will kill you. We’re the ninth safest city, how do you think I did it? How did I reach that title among the world’s safest cities? Kill them all [criminals].”

One must notice chief minister Sarma’s use of the word ‘criminal’ and ‘rapist’ in the statement at the start of this article. Sarma did not say ‘accused’. It is for a court of law to decide if an accused is a criminal or rapist or not. Incidentally, Sarma is a 1995 law graduate from Gauhati University. In the current Lok Sabha, 363 Members of Parliament have criminal cases against them. So, the question arises whether Sarma would call all of them ‘criminals’? 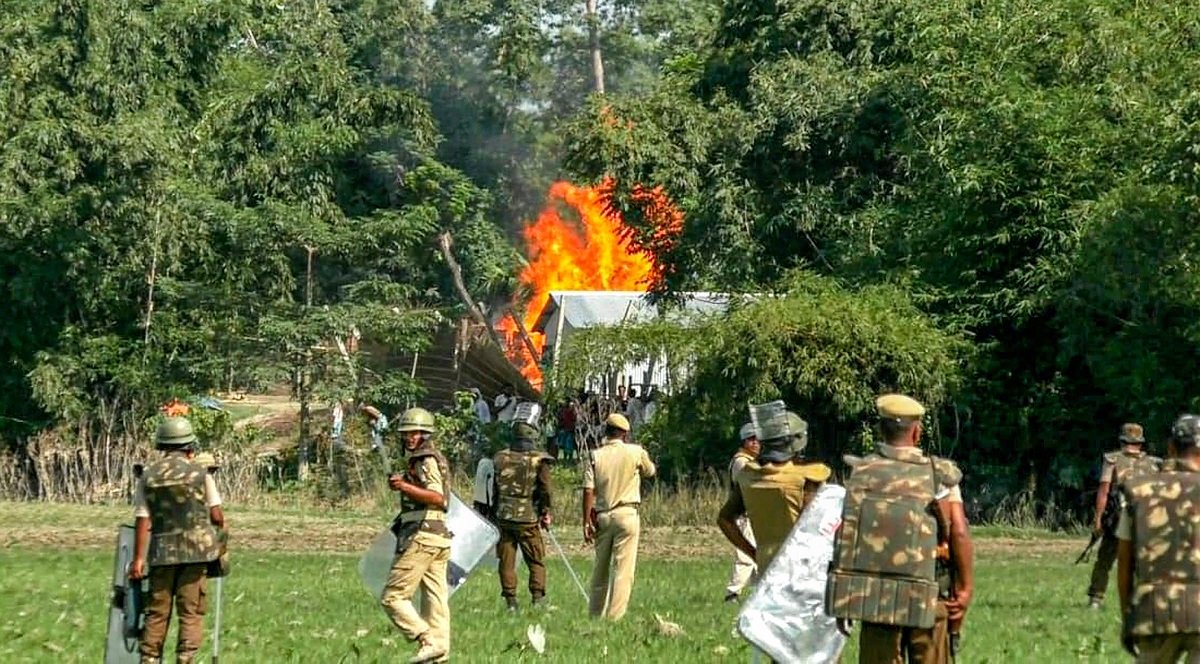 Police attempt to disperse the people protesting against an eviction drive in the Darrang district of Assam police, September 23, 2021. Photo: PTI Photo

Buoyed by the support from the chief minister, the state’s director general of police Bhaskar Jyoti Mahanta of Assam threatened and subsequently thrashed people for violating lockdown guidelines. Assam Police also started picking up morning walkers and leaving them stranded far away from their homes.

Santana Khanikar, the author of State, Violence, and Legitimacy in India, writes: “Extreme police action is not unknown to Assam. In a political context chequered with protest movements and their suppression, police and paramilitary state violence is a part of daily life for many in the state. Narratives of the brutality of the police, Indian Army and CRPF [Central Reserve Police Force] operations in search of ULFA [United Liberation Front of Asom] activists are part of village lore that children grow up with.”

After Adityanath came to power as chief minister in 2017, he largely focused on the economy and law-and-order. During his first term, there was a 40% increase in Gross State Domestic Product. But the reality of his economic performance is contested.

Since Adityanath assumed the chief minister’s office, the state has seen many protests relating to law-and-order. These include demonstrations against the CAA-NRC, Tablighi Jamaat, Hathras Gang-rape, Unnao rape, farm laws, and more recently protests in various cities and towns of the state after controversial remarks made by the now-suspended BJP spokesperson Nupur Sharma against Prophet Muhammad.

Adityanath has dealt with these issues ‘innovatively’. For example, in the aftermath of the CAA-NRC protests, the administration decided to put up posters of people who were allegedly involved in the protests. It took intervention from the high court and the Supreme Court to bring down the posters.

The administration has also levied fines against protesters for alleged damages caused to public properties. Again, the Supreme Court had to intervene and now the administration is busy returning the fines it had collected. In a 10-month period, UP police shot dead 39 alleged criminals in 1,142 encounters. Not a single one was on the state’s most-wanted list.

Here is Adityanath talking about how to deal with criminals in a TV interview: “Agar apradh karenge, toh thok diye jayenge [If they commit offences, they will be shot]”.

As per his affidavit submitted before the 2014 Lok Sabha election, Adityanath himself faced three cases where cognisance has been taken by a court of law. The charges against him included an attempt to murder; rioting, armed with a deadly weapon; promoting enmity between different groups on grounds of religion; and behaviour prejudicial to the maintenance of harmony.

Now that he is the chief minister, Adityanath has been dealing with people facing the same charges by resorting to encounters and bulldozer justice. But UP is an irony-free zone.

Back to the Philippines (via the International Criminal Court)

On February 8, 2018, the prosecutor of the International Criminal Court (ICC) announced that she will open a preliminary examination in the Philippines regarding crimes allegedly committed in the ‘War on Drugs’ campaign. Duterte, at that time, had finished just one-and-a-half years as president. The country ratified the ICC’s statue in 2011 and was subject to its jurisdiction until March 17, 2019, when Duterte withdrew from the court.

Once the prosecutor finished her preliminary examination, on May 24, 2021, she submitted a request to open an investigation into the international crimes committed in the Philippines between  November 1, 2011 and March 16, 2019.

The request noted that:

“[T]here is a reasonable basis to believe that the Crime Against Humanity of Murder was committed from at least 1 July 2016 to 16 March 2019 in the context of the Philippine government’s “war on drugs” (“WoD”) campaign… Markedly similar crimes were committed outside official police operations, reportedly by so-called “vigilantes”, although information suggests that some vigilantes were, in fact, police officers, while others were private citizens recruited, coordinated, and paid by police to kill civilians… The same types of actors also allegedly committed strikingly similar crimes in the city and region of Davao (“Davao”), starting in 1988 and continuing through 2016. The Request referred to Duterte’s tenure as mayor of Davao city. It explains how he later applied his Davao City model across the Philippines. The result was the extrajudicial killing of 12,000 to 30,000 civilians.”

On March 17, 2019, Duterte withdrew his country’s membership in the ICC on farcical grounds, including the assertion that the ICC had violated the legal principle of presumption of innocence However, the ICC can still continue  with the investigation as in fact doing so. That is because the crimes under investigation were committed when the Philippines was a member of the court. It effectively means that if Duterte did commit any crime during this period, which is under investigation, he can still be tried at the ICC.

Can Messrs. Sarma and Adityanath be tried, like Duterte, at the ICC?

Not in the foreseeable future. Since India is not a party to the ICC, the court does not have jurisdiction over international crimes committed in India. Moreover, it would be difficult to prove that events unfolding in Uttar Pradesh and Assam amount to crimes against humanity. But that’s not totally impossible.

‘Acts committed as part of an attack’ means that certain actions must be repeated and that these actions should cause harm. These attacks should also be either widespread or systematic and be against the civilian population as opposed to any enemy. And finally, the people attacking should have the knowledge that their actions are in furtherance of the state’s policy.

One can thus make a case that in furtherance of the official policy of ‘no tolerance’, the state officials and allied vigilante groups have been attacking civilians in the state of Uttar Pradesh and Assam.

Yet if the ICC can’t investigate these crimes in India, is there any other recourse?

One thus hopes that the Indian judiciary will step in, either to stop the chief ministers under discussion from going the Philippines’ way or to punish them for the alleged crimes already committed. If left unchecked, there will be further loss of lives and property of the helpless civilians.

Aman Kumar is an Assistant Professor of Law at IFIM Law School, Bengaluru. He is an alumnus of NLUJA, Assam and South Asian University. He writes on issues of international law at the Indian Blog of International Law.