Protests have been scheduled in several parts of the country. 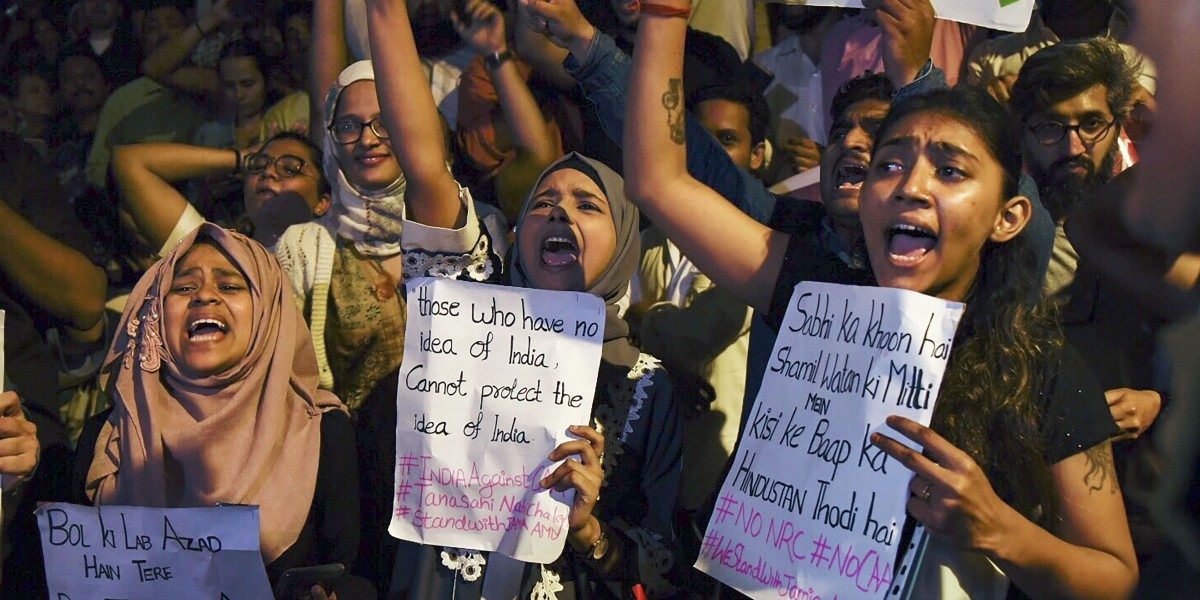 A protest against CAA in Mumbai. Photo: PTI

New Delhi: As opposition to the Citizenship (Amendment) Act (CAA) continues across most parts of the country, governments in three states moved to foil protests by imposing Section 144 or denying permission to hold rallies.

Protests against the Act have picked up pace since Sunday, when police violence was reported in Jamia Millia Islamia and Aligarh Muslim University against students who were protesting the controversial law, which seeks to grant Indian citizenship to non-Muslims fleeing religious persecution in Pakistan, Afghanistan and Bangladesh.

On Thursday, protests and demonstrations have been planned in many parts of the country.

In Delhi, the police on Wednesday denied permission to All India Students’ Association (AISA) and Swaraj Abhiyan to hold a protest march against the Act on Thursday from Red Fort, citing law and order issues. AISA has announced its intention to hold the march regardless.

According to news agency PTI, permission was denied for the protest march due to law and order and traffic issues. Later reports said that Section 144 has been imposed around the Red Fort area.

The march will commence from Red Fort and culminate at Shaheed Park near ITO. Apart from AISA and Yogendra Yadav’s Swaraj Abhiyan, other civil society groups are also expected to take part in the march.

“December 19 is the martyrdom day of (freedom fighters) Ram Prasad Bismil and Ashfaqullah Khan. We will unite on the special day to resist CAA and also raise our voice against the police brutality in Jamia and AMU campuses,” an AISA worker said.

Hundreds of students were injured in police violence during protests against the contentious Act near Delhi’s Jamia Millia Islamia University and in Uttar Pradesh’s Aligarh Muslim University (AMU) on Sunday.

The Delhi Metro announced that the entry and exit gates of seven stations would be closed on Thursday due to the planned protests against the amended Citizenship Act.

“Entry & exit gates of Lal Quila, Jama Masjid, Chandni Chowk and Vishwavidyalaya are closed. Trains will not be halting at these stations,” the DMRC tweeted.

Gates of Jamia Millia Islamia, Jasola Vihar Shaheen Bagh and Munirka were also closed. Trains will not be halting at these stations, it said.

In BJP-ruled Karnataka, Section 144 was imposed in Bengaluru and Mangaluru in the backdrop of planned protests against CAA. The procedure prevents more than three people from assembling.

The orders in Bengaluru would be in force for three days starting from 6 am on Thursday to midnight on December 21.

“Request Bengalureans to co-operate maintain peace. This is an international destination where people have come from parts of the country and world to study and do economic activities.
Let these protests and processions not mar daily life which has bearing on economic activity.” pic.twitter.com/GL1V0fb4bv

In Mangaluru, restrictions have been imposed from Thursday morning until Saturday midnight, the commissioners of police of the two cities said.

No one will be allowed to conduct protests, demonstrations, burst crackers or display weapons, the orders said.

Bengaluru police commissioner Bhaskar Rao told reporters that permissions have been denied to organise protests in the city. Anyone violating the orders will be dealt with an iron hand, he said.

“There will however be no restrictions on schools, colleges, malls, markets, bus services, metro rail, autorickshaws and cab aggregators,” he said.

Rao said the orders were imposed as many “violent incidents” had taken place during protests against the Act in various parts of the country, where public property was damaged.

According to some reports, Section 144 has been imposed across Karnataka.

Lawyer Gautam Bhatia called the move “a blatant abuse of power and a violation of fundamental rights”.

The imposition of Section 144 in Bangalore – without any well-founded apprehension of violence – is a blatant abuse of power and a violation of fundamental rights.

The Uttar Pradesh police also claimed that violent demonstrations in different parts of the country against the amended citizenship law had prompted it to deny permission to hold protests in the state. It issued prohibitory orders in the entire state.

Also Read: The Communities That the CAA Is Turning Its Back On

“Section 144 (prohibiting unlawful assembly) of CrPC is in force and no permission for any gathering has been given for December 19. Please do not participate. Parents are also requested to counsel their children,” DGP O.P. Singh said in a tweet.

Samajwadi Party and some other organisations have announced that they will protest against the Citizenship (Amendment) Act on Thursday.