Latest news from the protests unfurling across India. 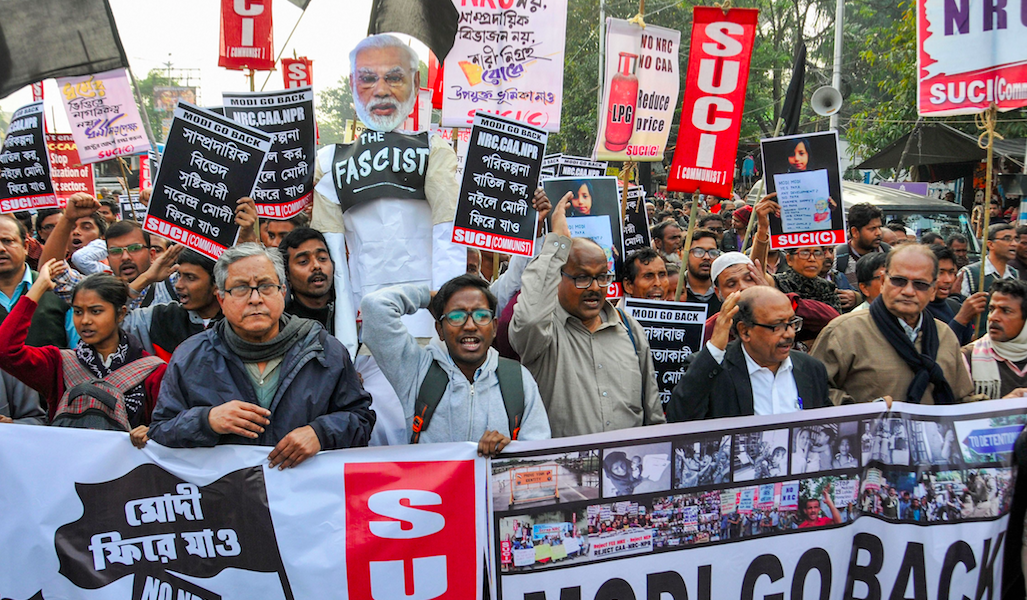 New Delhi: Protests against the Citizenship Amendment Act and the possibility of a National Register of Citizens have raged across the country. The attack by rightwing groups on the students and teachers of Jawaharlal Nehru University have also brought the institution’s resistance against the hostel fee hike within the ambit of the anti-CAA and NRC movement.

With new demonstrations scheduled each day at various locations and stories of brutal police action making the rounds, The Wire brings you the updates to the countrywide movement, as and when they happen.

Protests rocked the Bengal capital of Kolkata on Saturday as Prime Minister Narendra Modi landed there for a two day trip during which he met chief minister Mamata Banerjee. For a large part of Sunday, Modi is scheduled to remain in Bengal, indicating possibility of wider protests today.

CPI(M) general secretary Sitaram Yechury said the voices of those protesting against the contentious citizenship law, NRC and National Population Register (NPR) cannot be muzzled, as he hailed the protests in West Bengal during Prime Minister Narendra Modi’s visit.

Activists, who hit the streets on Saturday with placards that read ‘Modi Go Back’ and ‘Down with BJP’, continued their sit-in all night at Esplanade area of Kolkata, insisting that their agitation would continue till the prime minister left the city.

“The voices of those resisting the discriminatory CAA-NRC-NPR cannot be muzzled,” Yechury tweeted.

The voices of those resisting the discriminatory CAA-NRC-NPR cannot be muzzled. The PM is out of touch and thinks he can brazen it out. He cannot. India’s young have arrived and will take this country forward. #CAA_NRC_Protest https://t.co/j9JupjnciX

Prime Minister Narendra Modi on Sunday said a section of the youth is being misguided about the Citizenship Amendment Act and asserted that it will not take away anybody’s citizenship.

Modi also said whoever has faith in India and believes in its Constitution can become an Indian citizen.

“There are a lot of questions among the youth about the new citizenship law, and some are being misled by rumours around it… it is our duty to clear their doubts,” the PM said during an address at Belur Math in Howrah district.

“I want to make this clear again that the CAA is not about taking away anybody’s citizenship, but about granting citizenship,” he added.

The Naga Students Federation, one of the most powerful political presences in the state has released a statement in solidarity with the students of JNU. The statement says the attack on January 5 on the campus reflects the “xenophobic agenda” of certain forces, which are fuelled by far right, Hindu nationalist principles.

Extending “full solidarity” the students’ body has asked for an impartial probe into the brutal attack. The Delhi Police on Friday had named nine suspects, all from Left student wings, including JNUSU president Aishe Ghosh who suffered serious injuries in the attack.

The TMC supremo took centre stage among the agitating students who raised slogans against the amended Citizenship Act and the NRC at the Rani Rashmoni Road here, a few metres away from the Raj Bhavan, where she met the PM.

She said at the dharna that CAA notification will be only on paper which her government will not implement in the state.

Earlier, after meeting Modi, the TMC president had said she told PM to rethink on the issue of amended Citizenship Act and urged him to withdraw CAA, NRC and NPR.

Spirited protests against the CAA and NRC have been seen in smaller cities as well, one of which is Chhattisgarh’s Jadgalpur where people gathered and raised ‘azaadi’ slogans.