Follow The Wire's coverage of protests against the CAA and NRC. 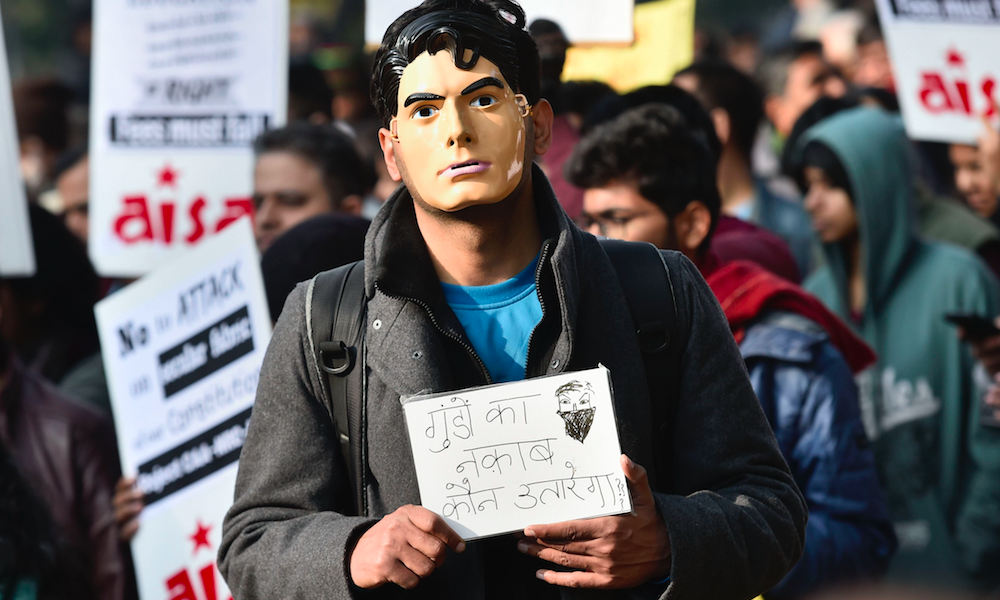 The protests demand a repeal of CAA, which the protestors believe could prove to be dangerous for Indian minorities and the poor if combined with the NRC. The protestors have also urged all citizens to boycott the National Population Register (NPR) process, which the government’s own documents say would be the first step for a country-wide NRC.

The protests got a fillip when the Delhi Police and Uttar Pradesh Police stormed into universities to contain students agitations. The use of violence against students was widely criticised, and made many eminent personalities sit up and speak up against the highhandedness of Modi government.

A majority of the protests have been peaceful. Students, women, young boys and girls, and Indian minorities have taken the lead in these protests.

The fact that only the BJP-ruled states used violent means to quell the protests was also widely panned, and prompted the opposition to allege that the CAA-NRC-NPR will strengthen BJP’s own agenda of Hindu Nationalism instead of serving any larger purpose for the development of India.

The government, in turn, hasn’t budged from its position and has in fact refused to even initiate a dialogue with protestors.

With each passing day, protests continue to grow. The Wire brings you all the details and developments on the matter. 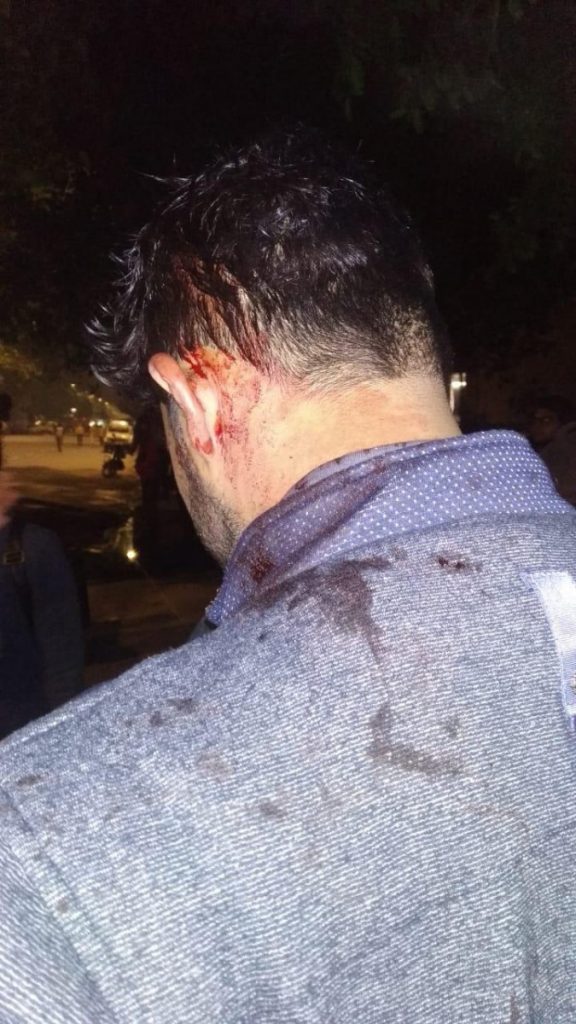 A protester injured after lathicharge in the JNU march. Photo: By special arrangement

People participating in the JNUSU-JNUTA march were allegedly cornered by police from both sides as they reached Janpath. They were allegedly lathicharged. Two buses full of detainees have allegedly been taken away and internet connection has been choppy.

Students of JNU who were marching to the Rashtrapati Bhavan after MHRD officials disagreed to meet demands of the VC’s resignation and rollback of the fee hike were allegedly lathicharged upon by police.

Eleven students including five women and one teacher have been detained at Mandir Marg police station.

Senior BJP leader Murli Manohar Joshi tweeted, “It is shocking that the VC is adamant for not implementing the govt proposal. This attitude is deplorable and in my opinion such a VC should not be allowed to continue on his post.”

New Delhi: According to reports, BJP’s Madhya Pradesh minority cell secretary Akram Khan has quit his post over the CAA and the NRC, saying party workers had made “indecent remarks” against a particular community.

“I respect the party’s decision on the CAA and the NRC and have been serving it for 25 years,” Akram Khan told reporters, according to The Hindu. “But some colleagues have been making indecent comments against a particular community, which is unbearable and hurting sentiments.”

New Delhi: In response to the brutal attack on JNU’s campus on January 5, the university’s students and teachers unions have jointly called for a citizens march at New Delhi’s Mandi House on January 9.

The JNU Students Union (JNUSU) and JNU Teachers Association (JNUTA) have given the call to protest against “mob violence and in defence of inclusive public education”. Aside from demanding the withdrawal of the decision to hike fees, the organisers have also called for the removal of JNU vice chancellor M. Jagadesh Kumar.

Latest reports said the Delhi Police has clamped Section 144 in the Mandi House area to stop protestors from congregating at the area. 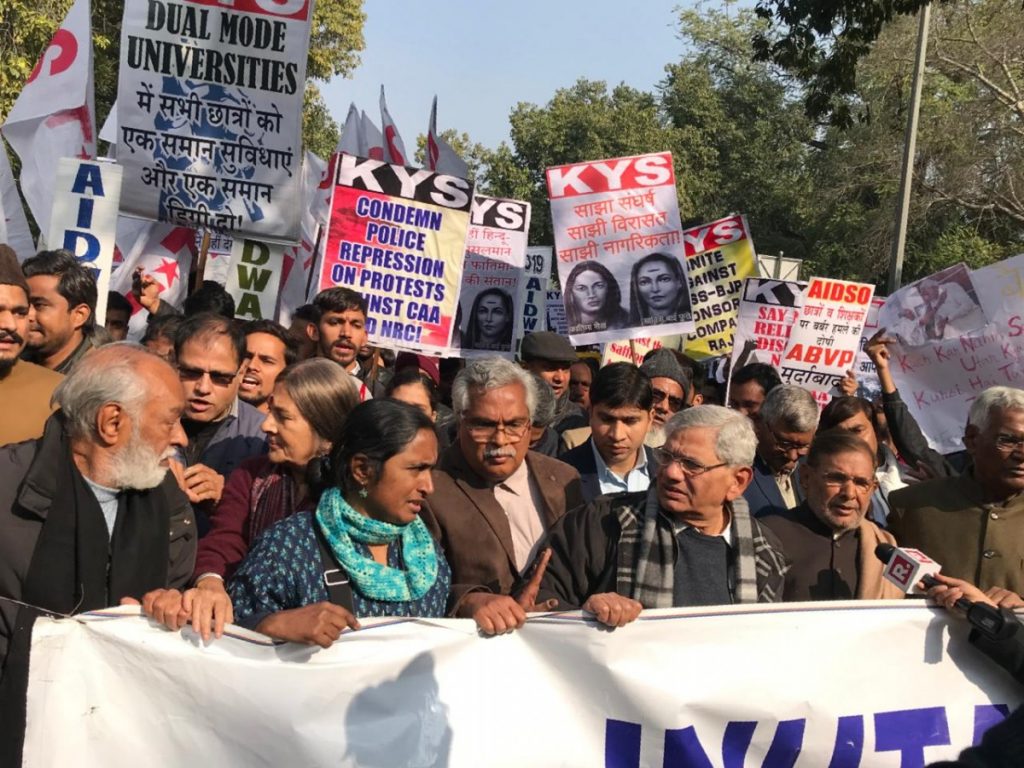 New Delhi: Hundreds of people sat at Jama Masjid in Delhi on Wednesday with candles and posters to protest against the amended citizenship law, NRC and the NPR.

Residents, mostly from all parts of Old Delhi – Lal Kuan, Gali Kasim, Bhuja Pandi and Ajmeri Gate – participated in the protest, where they also expressed solidarity with the students of JNU and Jamia Millia Islamia.

Children were also part of the candle march that started from Lal Kuan, passed through Chawri Bazaar and ended at Gate No. 1 of the Jama Masjid in Old Delhi, where the crowd sat on the stairs of the mosque and raised slogans.

On the proposed nationwide NRC, Zeena Junaid (39) said though she has the requisite documents, she wondered what would be the fate of those who did not. “Where will our brothers and sisters from Sikh, Muslim, Hindu and other communities go if they fail to submit their documents?” she asked.

Seeda, also a resident of Lal Kuan, said why there had been no action against any culprit involved in the assault on students. Seeda alleged that the present government was not only attacking students, but is also creating communal disharmony in the country.

The protestors said they would not be sharing any details with officials who come to verify documents regarding the NPR or NRC.

“Boycott CAA” and “Can’t protect students in your own country and want to protect minorities of other countries” were among some of the posters held by the protesters. They also held banners mentioning the Preamble.

The protesters also questioned why no arrests had been made yet in connection with the mob attack at JNU.

“There is an atmosphere of fear in the country under this government. No one can speak or share their views on the decisions taken by the government. We are not safe in our own country,” a student who did not wish to be named told news agency PTI.

Iram, an MA student of Jamia Milla Islamia said she fears going to campus after her university students were attacked by the police last month. “I was not part of the protest when the police barged into my campus. But after that incident, I also joined the protest,” she said.

A student of Delhi university, who did not wish to be named, said: “Instead of providing us employment opportunities and a safe campus to pursue our dreams, the government is sending their goons and assaulting students. Are they shaping our future or destroying it?”

The protest concluded with a rendition of the national anthem.

Zainul Abidin, around 45, had launched a hunger strike to protest the CAA  and the proposed pan-India NRC. He was joined by Mehrunissa, around 40, over a week ago.

Besides them, a trio of elderly women, now famously known as the ‘Dabang Dadis’ of Shaheen Bagh, stayed put at the protest venue at the Sarita Vihar-Kalindi Kunj road in South East Delhi since December 15.

Shaheen Bagh resident Syed Taseer Ahmed told PTI said the protest would continue until the CAA is repealed and the government assures that the NRC proposal has been dropped. “The people’s spirit is unfazed by slight rains,” he said.

Since Wednesday morning, hundreds of people remained at the venue, notwithstanding the drizzle, even as shops remained closed along the road, which has been blocked for 25 days.

The road is a key link between Noida and Delhi and has been closed by the Noida Traffic Police in view of the ongoing protests.

As the night draws in, more people join the protest and the crowd swells manifold, according to Taseer.

The crowd is at its strongest between 8 pm and 12 pm, when the protestors are joined by working professionals and businesspersons, he added.

Thousands of people, including women and children, are protesting at Shaheen Bagh and the nearby Jamia Millia Islamia to oppose the CAA and the NRC.

Besides Delhi, protests have unfolded in several parts of the country over the contentious law. At several places, police have opened fire on protestors. In Uttar Pradesh, more than 20 people have died, allegedly in police firing.

Protest held in Mumbai against CAA, attack on JNU

Mumbai: Hundreds of people, including senior citizens, youths and women, took part in a march in sururban Bandra against CAA and the attack on Jawaharlal Nehru University (JNU) students and faculty members in Delhi.

During the march, the protestors also raised slogans against the government over the NRC and the NPR.

A gathering under the banner of ‘Voice of People’ held placards like ‘Boycott NRC’, ‘Stop dividing India’, ‘Don’t divide us’ and ‘Save Constitution’, according to news agency PTI.

“Common people, particularly the poor and the Muslims, stand to be affected the worst by this Act. After demonetisation, the people are afraid that they will again be forced to stand in queues,” Irfan Macchiwala, one of the protesters, said.

Another protestor, Mustak Ansari, said that the government should focus on the development and progress of nation and ending unemployment and inflation. “But it is instead coming up with issues which seek to divide India on the basis of religion,” he said

More than 100 academics from Gujarat have expressed their concerns about the CAA-NRC, saying it will “greatly imperil the secular fabric of India”. They also stood in solidarity with students who are protesting the controversial issues and condemned the “violence perpetrated by the police in Delhi, Aligarh, Assam and other cities”.

They said the proposed nationwide NRC carries the risk of disenfranchising many Indians who lack the requisite documentation to prove their citizenship. “As the recent Assam experience has shown, this process disproportionately affects the poorest and most vulnerable individuals,” they said. The signatories said the CAA “in its current form ensures that the exclusions wrought by the NRC will further discriminate against Muslims”. They emphasised that while in favour of humane treatment of refugees and a process that allows them to apply for citizenship, it should be done without discrimination on the basis of religion.

“We demand the cancellation of the NRC, the abrogation of the CAA, and impartial investigation of both the vandalism outside universities and of police violence within universities,” they say.

Read their full statement below.

Letter of Solidarity by The Wire on Scribd