Almost three months after the law was passed, protests have not abated and many lives have been lost. The government must provide a healing touch. Protest at Cambridge University against the CAA and NRC. Photo: Special arrangement

Even 70 days after the Citizenship (Amendment) Act (CAA) was passed, and the continuing widespread agitations and protests all over the country leading to many deaths, no end is in sight. The government seems to believe that it alone knows what is in the best interest of the country and agitations are largely due to the disinformation campaign by the opposition parties and disgruntled liberal sections.

On the other, the opposition firmly believes that India’s constitutional values are being compromised and steps taken by the government are patently anti-Muslim and would permanently damage the unity and integrity of the country. The truth lies somewhere in between. Unfortunately, my repeated pleas in the seven articles written on the relevant issues so far urging for a national dialogue and debate have fallen on deaf ears.

In this column, I have highlighted, illustratively, just five issues which need to be debated nationally. There are many others craving for attention.

First, public memory is phenomenally short but it needs to be remembered that the genesis of the National Register of Citizens (NRC) was the Assam Accord signed by Rajiv Gandhi in 1985, which provided for identifying those who came into India after the designated date and deporting them, without realising that deportation of undocumented immigrants would be impossible.

The proposals for NRC and the introduction of a separate national identity card for citizens and non-citizens were mooted in the context of the influx of immigrants, much before the Aadhaar card was launched. Government pronouncements in parliament and outside of 20 million ‘illegal Bangladeshis’ and the Supreme Court decision in Sarbananda Sonowal v. Union of India (2005) accentuated these fears. The Supreme Court had called it an invasion of the country and invoked the constitutional duty of the Centre to take steps to guard the borders.

However, it now appears that the context itself has changed radically. Chinmay Tumbe has brought out the findings based on migration data of Census 2011 published in 2019. It shows an altogether different picture. The number of Bangladeshis in India is actually falling, according to the Census. Further, the number of Indian residents born outside the country fell from 6.2 million to 5.3 million between 2001 and 2011, taking the immigration rate down from 0.6% to 0.4%. The immigration rate across India at the district level recorded by the Census 2011 shows that in over 500 of the 640 districts of India in 2011, the immigration rate was under 0.5%. It is seen that except for a few districts along India’s border with Bangladesh, undocumented immigration is likely to be a tiny fraction of the population.

These figures raise serious doubts about the credibility of the Census data. There is obviously gross under-reporting. It is not clear why it took eight years for the census commissioner to release the data on migration. It is not clear if the government has tried to reconcile these figures with its own data on undocumented immigration. Either the census results are wrong or the government data is concocted.  Both cannot be true. But the census figures knock the bottom out of the NRC. This issue, therefore, needs to be thrashed out and the government’s considered opinion must be placed before the country. 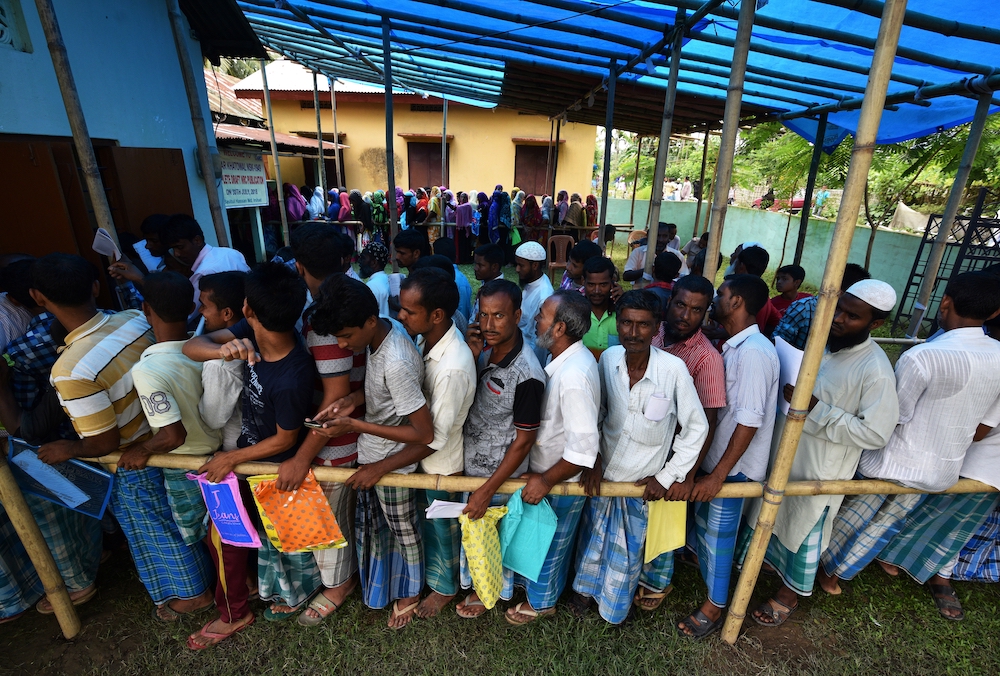 File photo of people waiting to check their names on the draft list at the National Register of Citizens (NRC) centre at a village in Nagaon district, Assam in 2018. Photo: REUTERS/Stringer

Second, while over a hundred countries have laid down policies for national identity cards for their citizens and/or residents, several democracies such as Australia, Canada, Denmark, Norway, the UK and the US do not have a national identity card. In India, the Aadhaar card coverage is now universal. In addition, India already has voter ID cards and  PAN cards. Is it necessary to introduce yet another identity card?

Third, various options for dealing with undocumented immigrants need to be spelt out clearly. As opposed to a number of countries in the European Union and the US, options are limited for India. Keeping immigrants in detention centres is out of the question due to their huge numbers. As I have advocated earlier, the only option is to declare them as stateless persons to begin with, and absorbing them as citizens after some time, say, ten years. India has evaded any discussion on this critical issue for the past several decades. It is high time a national policy is evolved and adopted.

Fourth, India has been unable to make up its mind about enacting a law dealing with refugees. India had to accept over ten million refugees from the erstwhile East Pakistan, before the creation of Bangladesh. Many Sri Lankan refugees arrived during the anti-Tamil violence in that country. India treated these refugees most generously and almost all of them have gone back to their countries. But, as an enlightened democracy, India must fall in line with the best international policies and practices and enact a refugee law. Relevant issues and concerns need to be debated nationally.

Fifth, if after re-examination as above, it is still considered necessary to proceed with the NRC, ways will have to be found to simplify the process for establishing one’s citizenship. It is difficult to agree with Judge Kashikar in Mumbai that election card is sufficient proof of citizenship. Same is true of the Aadhaar card. In Assam, the process became unduly complicated due to the terms of the Assam Accord and the sub-nationalism which runs deep as seen from the recent decision of the state government to identify the native/indigenous Muslims by carrying out a special census. Fortunately, this is not so in most other parts of the country. At the same time, it will also not be proper to take an extreme position, as some states seem to be doing, by suggesting that even the name of the father need not be asked. However, a much more simplified format can be evolved for the NRC. This exercise must not be done behind closed doors by the government. It should be a consultative and open process to increase its acceptability.

India must address these issues objectively, jettisoning narrow interests and political baggage. What is at stake is India’s future as a strong and vibrant democracy. An announcement by the government of bringing out a white paper will provide a healing touch and create a climate for finding a lasting solution.