The CAA denies the value of community as it violates fraternal bonds between communities: a public good recognised by Ambedkar and the Supreme Court in decisions on secularism.

The unconstitutionality of the Citizenship Amendment Act (CAA), as violative of the fundamental rights of equality, life and liberty, has now been widely appreciated. What also deserves attention is how it sacrifices our deepest constitutional commitments to dignity, fraternity and integrity of the nation that breathe life into our fundamental rights.

These values are not platitudes or constitutional jumlas even if they find no mention in the text of our fundamental rights. They are guarantees entrenched by the preamble and judicial decisions that universally protect all persons including illegal immigrants. It is on a test of constitutional values that the humiliation of specific illegal immigrants, Muslims generally, and even legal migrants becomes manifest. The legal, constitutional, political and moral wrongs of the CAA come together when viewed through this lens.

Values are prone to being rendered vacuous by their vagueness. When the state flaunts its coercive power, vagueness provides easy cover to the wary. For guardians of the constitution though, this is precisely the time to breathe life into core constitutional values. In the numerous petitions challenging the CAA, the Supreme Court of India could anchor the Indian republic on a clearer understanding of fraternity, dignity, and integrity and their relationship with secularism.

Much like the constitution of Germany, India’s was drafted alongside the Universal Declaration of Human Rights (UDHR). Christopher Morsink, the foremost historian of the UDHR laid out in two books how inherent dignity and universality were plateaus of agreement for the drafters.

Even though India’s textual inspiration for dignity was the Irish constitution, its references to dignity and fraternity cannot be divorced from this spirit of the UDHR that swept across liberal constitutional democracies. It is no coincidence that the preamble itself distinguishes between values applicable to citizens alone and those that apply universally to all persons.

The preamble begins with the values of sovereignty, socialism, democracy and republicanism that are the very foundations of India. Subsequently it ‘secures for its citizens’ social economic and political justice, ‘liberty of thought expression, belief, faith and worship’ and ‘equality of status and of opportunity’.

Specific provisions of the constitution flesh out these special obligations towards citizens. For example, the liberties under Article 19 are only for citizens. Articles 15 and 16 secure equality relevant for socio-economic and political justice to its citizens. Through these articles, the constitution recognises special obligations arising between states and citizens just as they arise between spouses or workers or players in a team.

In contrast, articles 14, 17, 21-25, 27 and 32 recognise universal rights of all persons. They are about equality before the law, untouchability, life and liberty, preventive detention, self-incrimination, education, child labour and the right to constitutional remedies. They logically flow from the preamble’s statement to promote amongst its citizens ‘fraternity assuring the dignity of the individual and unity and integrity of the nation’. Each one of these terms is pregnant with moral and political value and deserve careful attention and not mere rhetorical flourish. Integrity is not about territory

Unity and integrity of the nation are not mere references to territory in the preamble. ‘Nation’ is a political term that refers to a common political consciousness of a political community. India was a nation in the making in 1947, and still is. Indians continuously debate core ideas that create a shared political commitment.

Debates on the idea of India, its constitutional morality, terms of citizenship, federalism, novel governmental structures in Kashmir and the north-east, or the justice of its property and tax regimes are part of the process of shaping India’s shared political imagination. The political nation emerges clearly in the choice of constitutional language when referring to territory. The constitution chooses ‘Union’ or ‘territory of India’ for geographical references. In contrast, ‘nation’ in the preamble is firmly tied to the idea of integrity, which in turn is a moral idea.

Integrity is a moral value, not a tangible territorial fact. Ronald Dworkin, quoted widely by the Supreme Court on rights and dignity, provided book-length accounts of the value of integrity. Integrity requires that we decide difficult questions on principle, and not expediencies. Principles are the moral and political commitments of the republic articulated through constitutional values and past landmark decisions.

When a community guarantees rights to people, it chooses to pursue a path of principle as opposed to pure collective policy. It must then act with integrity by placing individual rights, rather than policy goals at the centre of political discourse. Constitutional challenges to the CAA question the integrity of the government’s decisions as laws cannot trump rights and principles.

Individual rights are necessarily about justice and fairness, as opposed to collective goals. Goals can be pursued pragmatically, sometimes by justifiably suspending values and rights for a better future. What integrity, in contrast, requires is our laws to be morally justified by a shared constitutional morality. Such a shared morality is what would unite the nation and guarantee its integrity. The values of fraternity and dignity in the preamble must be understood in this context of national unity and integrity. They articulate our shared constitutional morality that holds the community together.

‘Fraternity assuring the dignity of the individual’

It is no coincidence that when the constitution invokes dignity and fraternity, the individual, not the citizen, is in focus. Illegal immigrants are as human as citizens are. They can be singled out for special treatment, but not in a way that denies their human dignity. Fraternity can only be promoted by assuring the inherent dignity of illegal immigrants. The CAA, however, sacrifices fraternity by classifying illegal immigrants based on religion, thus violating the intrinsic relation between fraternity and secularism.

In SR Bommai’s case, the Supreme Court upheld this intrinsic link between fraternity and secularism. Relying on Ambedkar’s views, it held that fraternity aimed at creating unity by improving ties across castes and religions:

“India being a plural society with multi-religious faiths…, secularism is the bastion to build fraternity and amity with dignity of person as its constitutional policy.”

CAA fails to recognise this fraternal relationship between people in declaring some persecuted people to be preferred over others even if they are similarly persecuted. Some persecution is surely more severe than others, e.g. a Muslim Uighur facing death compared to a liberal atheist facing curtailment of freedom of expression. That is a secular basis for prioritising asylum if the choice must be made.

Also read: The NRC Will Backfire. Here’s Why

But to discriminate based on one’s faith, belief and national origin is not only arbitrary but injures fraternity, which denies, not assures, dignity of individuals. It injures fraternity in failing to recognise the common human suffering perpetrated by social and political persecution. It violates dignity because it judges people on immutable characteristics, over which they have little or no control. Their autonomy i.e. the ability to give laws onto themselves, or to self-determine the course of their lives, is denied.

After the Privacy and Aadhaar decisions, Indian jurisprudence has clearly recognised the indignity of judging people on immutable characteristics. Justice Sikri in AADHAR, relying on earlier decisions, laid out three core principles of dignity that capture this: intrinsic value of every person, autonomy and community. The CAA specifically violates the first and third principles. The second is violated automatically whenever human rights of individuals are denied.

The CAA humiliates illegal migrants from excluded communities, Muslims, and even legal migrants by denying their intrinsic worth. By excluding illegal immigrants from specific communities to qualify for its benefits, the CAA denies their intrinsic moral worth by treating their persecution as less deserving of protection. Intrinsic worth is a feature of dignity that is distinct from equality of status and opportunity guaranteed to citizens by the constitution.

The equality at issue here is the equal moral worth of humanity that deserves respect in that it is of incomparable value.

In Immanuel Kant’s words, it is ‘beyond price’ and thus absolute. That is why to treat someone merely as an instrument towards other goals is violative of dignity. Intrinsic worth cannot be measured in terms of other goals. Dignity is thus inimical to comparing illegal immigrants to insects to be hounded out to achieve political, economic or electoral goals.

CAA humiliates even legal migrants who must wait seven years at least for citizenship by telling them that they are less worthy than the chosen illegal migrants who could get citizenship in five years just on the fact that they belong to specific religions and countries. Even the dignity of the included religions from the excluded neighbouring countries like Sri Lanka, China and Myanmar are violated on the same grounds of being discriminated based on immutable characteristics related to their intrinsic worth. 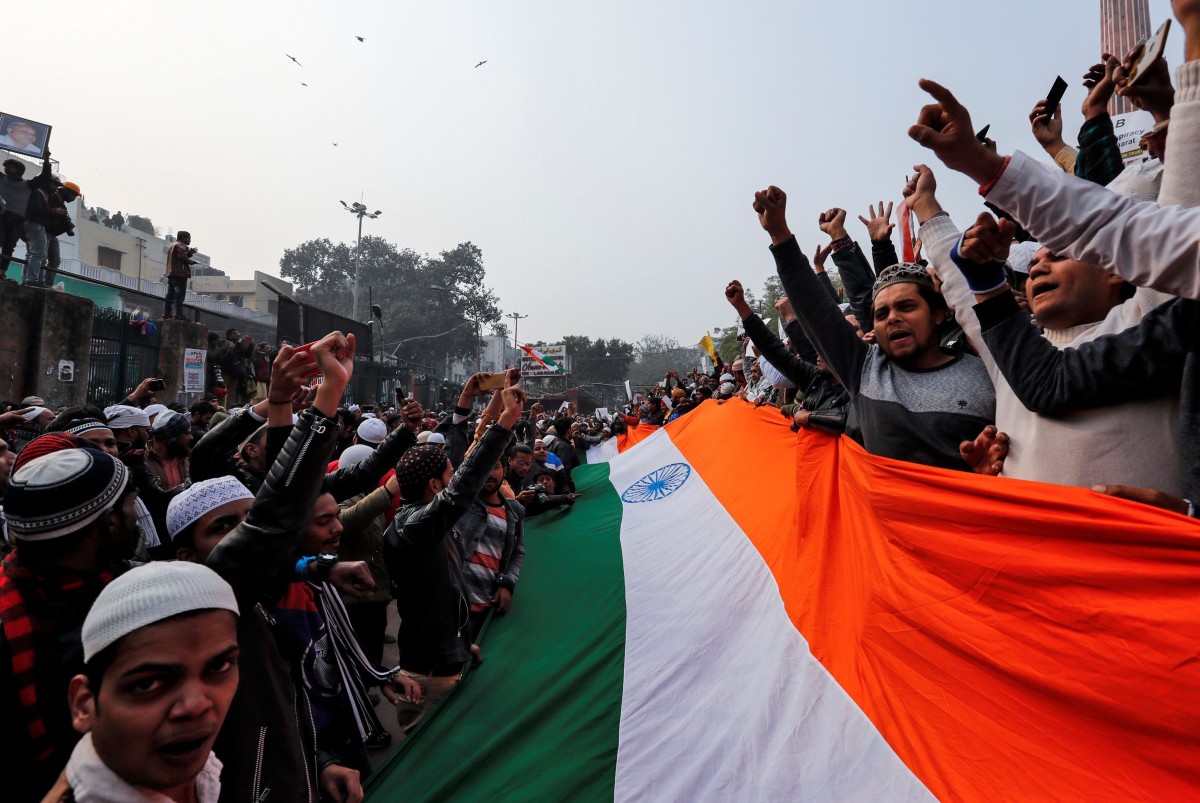 Demonstrators hold the national flag of India as they attend a protest against a new citizenship law, after Friday prayers at Jama Masjid in the old quarters of Delhi, India, December 20, 2019. Photo: Reuters/Danish Siddiqui

Muslims, in general, are also humiliated as their religion is singled out as a criterion to select countries and individuals that will be disfavored. The logic is analogous to hate speech, in that a minority is told expressly by the government that their identity is a valid basis for not recognising the common humanity of individuals. In other words, being Muslim means being less human. Constitutional courts, e.g. in Canada, have recognised that such action prevents minorities from participating in the ordinary democratic life of a polity and such actions are thus inimical to a free and democratic society.

Finally, the CAA denies the value of community as it violates fraternal bonds between communities: a public good recognised by Ambedkar and the Supreme Court in decisions on secularism. In passing such a humiliating and inhuman law, and then by curbing protests with brutality, the government of India has told its people that they are mere instruments in a larger political plan. The republic is, therefore, again under siege. This time by an explicit denial of our deepest constitutional commitments.