During the dry months, cows in Bundelkhand's Mahoba are kept locked in enclosures without food or water. 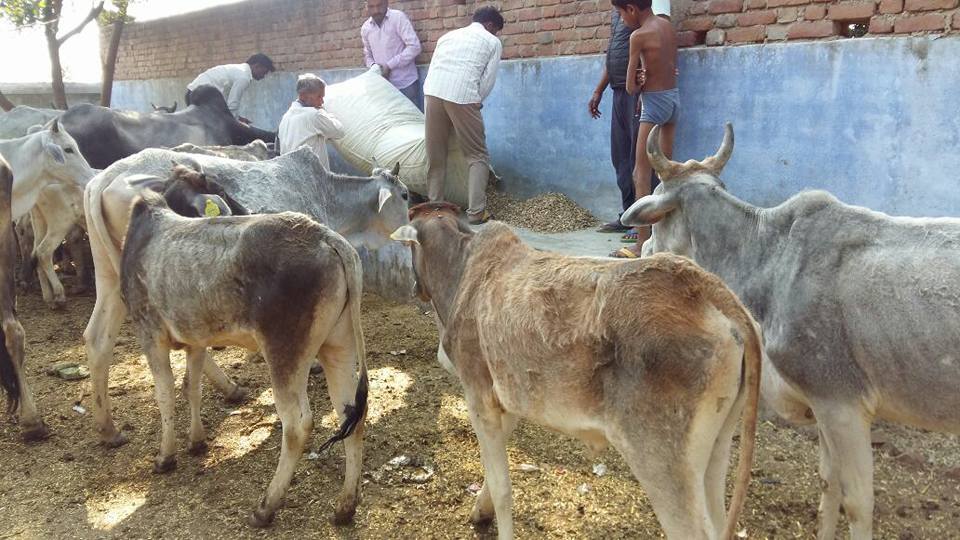 Animal rights activists feeding cows in one of the enclosures in Mahoba. Credit: Abhinav Srihan/Facebook

If there was a fraud perpetrated on the Indian people by Indic civilisation and subsequently, a pseudo-patriotic politics, it is to declare itself a nation of cow protectors and worshipers. Every rabid sanghi and self-righteous gau rakshak (cow protector) unleashing terror and violence on society in the name of cows with a new self-confidence under the present dispensation is a façade for a tale of untold cruelty to these peaceful and gentle bovines. Under every such headline lies a story of cows dying from eating plastic bags on the street, run over by cars, piled in a truck to be slaughtered or made a government target for quadrupling India’s leather exports.

When a few of students threw a puppy out of the window in Chennai, when a group of juveniles burnt puppies in a bonfire in Hyderabad, when a psychopath threw acid on sleeping puppies in a Delhi metro station or when a watchman beat a dog to death in a Delhi college, the media came out in full force on behalf of the dogs and even won justice for them. This is very heartening and is a sign that we have come far in our concern for animal rights.

But what of cows, who spend their lives supplying humans with milk? The story of several hundred cows dying of thirst and starvation does not make the news. A similar story has now come to light in Uttar Pradesh, in the midst of the assembly elections. Each party is busy projecting its goodness and compassion. Yet, in Bundelkand’s Mahoba district, a saga of human cruelty towards animals has been exposed. The ruling party in UP and the supposedly cow-friendly Centre should hang their heads in shame and stop using cows to project themselves as ‘good’ Hindus. The people will not buy this hypocrisy any longer.

The Bundelkhand incident came to light at the end of January 2017, when Abhinav Srihan, animal activist and founder of Fauna Police, an NGO based in Delhi, responded to a helpline call from a local person who reported cases of extreme cruelty to cows in places like Chikkara, Khanna and 103 other villages in the area. From January 27, he has put up over 100 posts on Facebook and has been live streaming videos daily.

The forced incarceration of cows is the result of a vile practice called anna pratha, where they are locked up in large spaces like hospitals and schools for over three-four months during the drought period, to prevent them from grazing on drought-stricken land. Most often these are cows whose milch days are over and have been abandoned rather than killed, since that is against the law. In theory, when the rains come, they will be released for grazing. Till then, they are supposed to be fed and taken care of. However, in Mahoba, these animals belonging to local farmers have had the gates shut on them for the last four months and have been left to die. The farmers’ stance is that by the end of March wheat and chickpeas will be harvested and the cows will then be released. But as more than 50% of cows that have already died, the chances of even a handful of them surviving till March-end are bleak. Srihan’s photos and videos, which he hopes will stir our thick-skinned politicians to action, are self-explanatory.

His horrifying videos show a bleak landscape strewn with dead cows or skeletal cows painfully breathing their last, dogs waiting in the wings to feast on them. Denied food and water, they fall one by one. The food bins are empty and the water troughs are bone dry. These animals have not drunk or eaten in months. There are calves who died as soon as they were born without a drop of milk from their starving mothers. Almost 500 cows have already died and the others are awaiting their turn.

No farmer wishes to spend a rupee on dry cows, nor does the law allow you to kill them. So, instead of inviting legal punishment or the karmic consequences of killing a gau mata, abandoning them to their fate is considered the best option.

But in a cow-loving country with an ostensibly cow-loving administration, who should be responsible? Certainly it does not seem to be the district magistrate Ajay Kumar, who has ordered the forced incarceration and has been made fully aware of the situation. He has stopped responding to calls and claims that these are old videos, though Srihan has been live streaming them. Despite repeated requests, he is not ordering their release, nor making any arrangements for food and water. Lucknow is deaf, as is the prime minister’s office in Delhi. Simply put, these cows are dying because of failed management from the state and Centre. The ‘nationalist’ gau rakshaks have vanished; only the activists remain.

A few NGOs have chipped in to sustain these animals. The Holy Cow Foundation and Dhyan Foundation are buying food and water. But where are the big animal welfare organisations who have the power to enforce a release order or provide money to permanently rehabilitate these cows, Srihan asks while single-handedly handling the situation, staying in a small room in Kabrai, a nearby village. Indeed, where are they who were so vociferous about the 50-100 bulls of Jallikattu, those fighting the vegan fight or those concerned about saving native breeds of cows?

If these cows were humans, this would be a human rights violation and the perpetrators would be punished. But cows are human property and the laws of such cold-blooded killing can be circumvented either with silence or belligerence. Why else would the district magistrate and the chief minister of UP not be booked for abysmal neglect of duty and mass murder? And why should the PMO or the Ministry of Environment and Forests not intervene?

The cows in the prisons of Bundelkhand must be released immediately and permanent arrangements must be made for their life-long care. The practice of forced incarceration must be stopped. The administration must carry out its responsibility to care for these animals.

Rukmini Sekhar is a writer committed to seeking justice for animals.