Unless the courts step in or the weak build up their own defence, the bulldozer will continue to go on the rampage. The bulldozer style of saffron politics has provoked quite a few articles from different angles, but we may like to look at the juggernaut vehicle as the latest expression of toxic masculinity – something which was quite evident in its predecessors, the horse, the motorcycle and the speedster car.

So, let’s begin with the horse. From amidst the wealth of literature on the relationship between man and the horse, we zoom directly into Adrienne C. Frie’s report in the Oxford Journal of Archaeoolgy in October 2017, on an archaeological examination of burial ground culture at a site in Slovenia.

Entitled Horses and the Embodiment of Elite Masculinity in the Dolenjska Hallstatt Culture, the author declares quite unambiguously, that “horses have long been noted as an aspect of elite male status…as part of the elite warrior package that developed as a transcultural phenomenon in the Bronze Age, and that continued to be an important expression of elite masculinity in the Early Iron Age…These elite warriors likely represent a hegemonic masculinity – that…was a complex presentation of self that drew on politics of gender, power, status, and the potential for violence.”

American academic Monica Mattfield who has worked on how horsemanship was utterly masculine between the 17th and the 18th centuries in England, brings in a new element.

This is the political and “in this understanding the man represented the ruling monarchy (the father), and the horse, the nation (the rest of his household)”. She explains that to “many men, horses were indivisible from their masculinity, their ability to govern successfully.”

The similarities with today’s bulldozer are now clearer. By the second millennium BCE, horses were harnessed to chariots, and archers mounted on them spread terror among peasants and foot-soldiers all over the Eurasian heartland. Arthur Cotterell in his book Chariot: The Astounding Rise and Fall of the World’s First War Machine called them the “world’s first war machine” and his descriptions of the havoc they wreaked among the helpless populace are chillingly familiar with the depredations let loose by bulldozers in Modi’s raj. 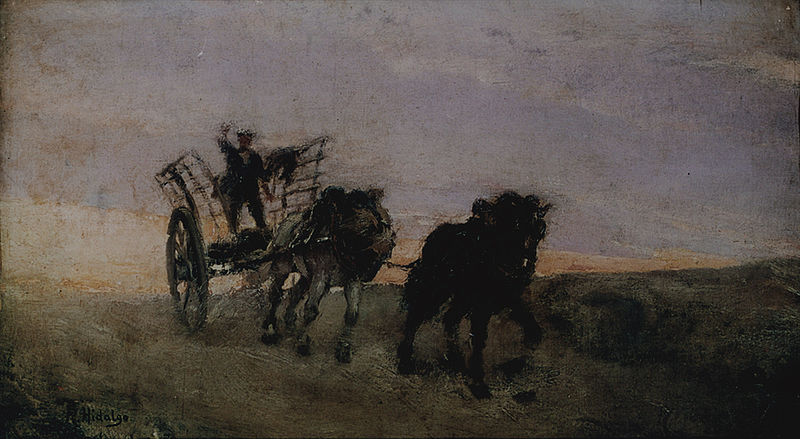 Let us move on to the motor car and the motorcycle that replaced the horse.

In his On Men and Cars: An Ethnographic Study of Gendered, Risky and Dangerous Relations, Dag Balkmar touches upon several psychological issues inexorably linked to men (and some women as well) in Sweden and how cars are actually “extended selves”, intended to be “provocative” and the reason why “driving is daring”.

Hollywood has scores of films on risk driving, like Mad Max, Fury, Baby Driver, The Driver and so on – inspiring or corrupting several generations of young men (and women) into foolhardy and life-risking antics with engines revving up and roaring. The macho stamp is simply unmistakable and with it comes gendered domination and a pseudo-sadistic kick from hegemony over the rest of humanity, who, to these daredevils is just “chicken”.

Also read: India Is No Longer a Democracy but an ‘Electoral Autocracy’

To a section, the “feeling of oneness” with the motor car was almost as thrilling as merging with the horse was previously. The restless power of the powerful, almost-uncontrollable beasts they had mastered conferred glory and demonstrated the hegemony of the ultra-virile. A western analyst concluded: “Hegemonic masculinity is intrinsically tied up with the notion of competition, leading to fights over who’s stronger and smarter – not necessarily on the bigger metaphorical dick”.

Car culture did not create toxic masculinity. But it certainly used its worst tropes to its advantage from its start — and not just when it comes to car ads. 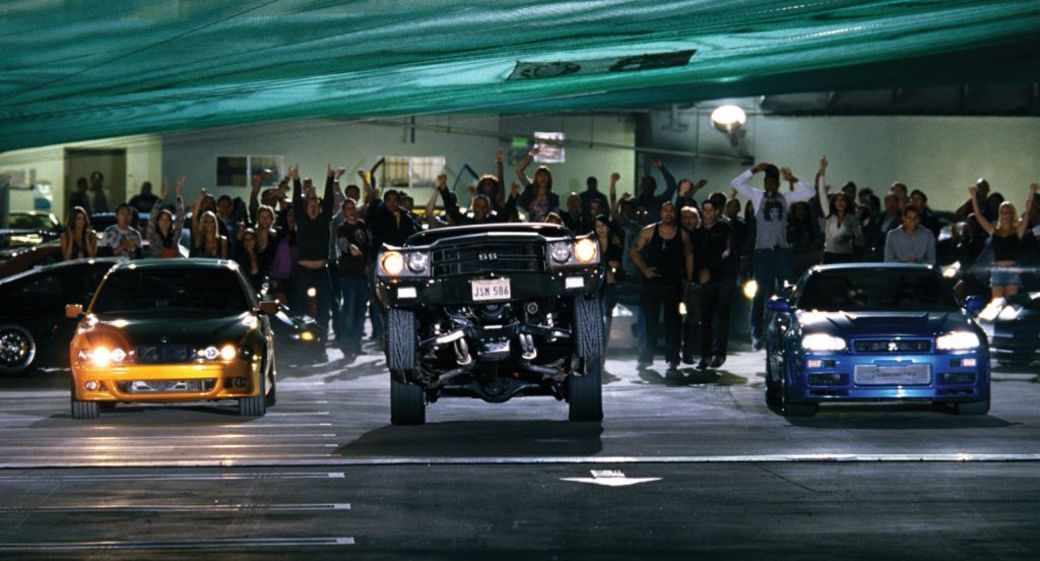 A still from the ‘Fast and Furious’ film series.

Motorcycling is equally, if not more masculine to a large section and is certainly closer to the horse. The exhilarating union between motorcycle and rider is only formed in relation to other bodies – non-motorcycles and non-riders – and exists as a form of exclusionary discourse from the surrounding world.

We need not even discuss the animal-like sense of overpowering bystanders once a motorcycle is bursting with fury and the essential point, its dominance, emanates from the panic it creates. When the rider ploughs through crowds, he demonstrates not only his total control over the ferocious electro-mechanical horse, but he petrifies his audience, deriving an unmatched thrill from it.

To be fair, the motorbike is not just the preserve of men in the west, but the percentage of female participation in nowhere near that of men, who challenge death at every moment.

There are good works on how motorbikes represent different visions of power, style and technology to the genders and one is also reminded of Paulo Coelho’s encounter with women riders in The Valkyries. Nevertheless, the hyper-male type derives a sadistic pleasure in the sheer bullying power of the horse, the motorbike or the powerful automobile in cowing down others and romanticising this power was/is part of the lore.

The bulldozer represents only the logical extension of this psychological pursuit. It reeks of power, trampling and occupation by the pretended machismo. Sanjay Gandhi put it to devastating use during the Emergency as he razed to the ground the hutments of the poor at Turkman Gate.

The next honour for ‘popularising’ its use for similar reasons goes to Adityanath, who dispatched his bulldozer hordes to subjugate the wretched but the defiant in countless places in Uttar Pradesh. He realised the sheer terror and awe with which the bulldozer was held by the dominated – many times more than what a totally unimpressive pipsqueak in saffron could ever command.

His delirious sense of duty to cleanse his state of ‘the other’ was further heightened as the bulldozer pulverised the will and stand of those he despised and its long ungainly arms wrenched the dwellings of his targets.

From Khargone in Madhya Pradesh to Jahangirpuri in Delhi, the bulldozer is now the preferred weapon of the toxic masculine and unless the courts halt the mayhem or the weak devise their Vietcong defences, it will continue to go on the rampage. 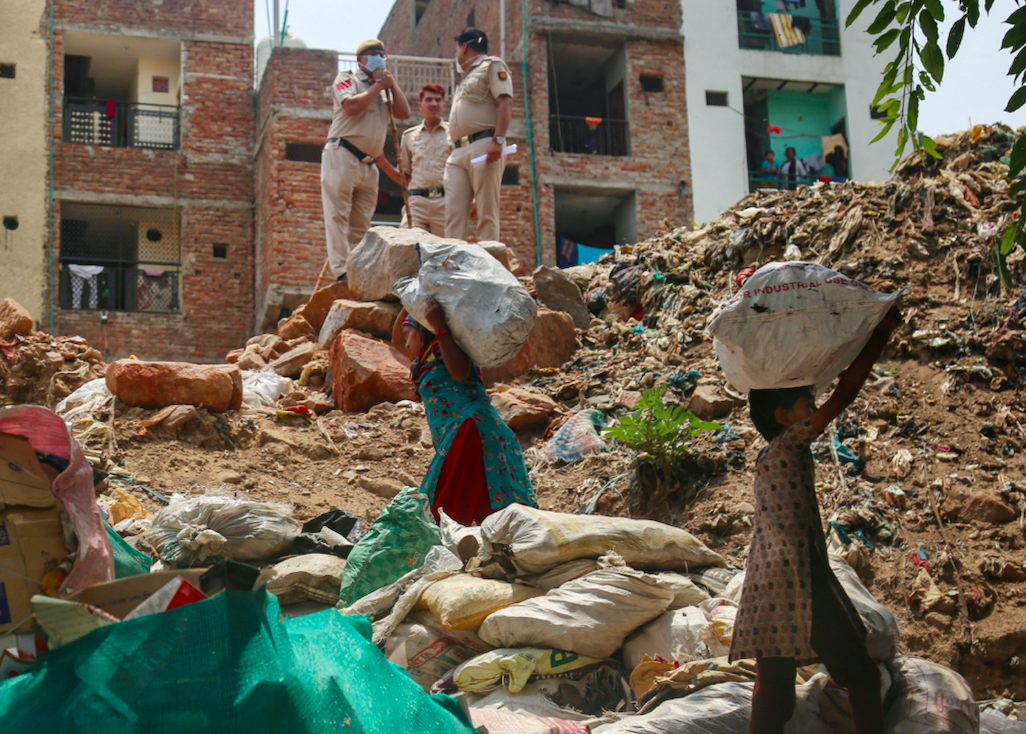 Locals carry their belongings during an anti-encroachment drive, in New Delhi, Thursday, May 12, 2022. Photo: PTI

The machine bestow upon those who direct their operations the wild powers of unstoppable juggernauts, as they imagine themselves as the ultimate macho men. After all, the colossal ultra-thick blade plates of bulldozers sweep clean what the hooves of the horse had struggled to clear and the wheels of the motorised vehicles had stumbled upon but could barely crush.

As Sakshi Maharaj, the terribly controversial BJP MP from Uttar Pradesh has pronounced: “While Lord Ram and Krishna had dhanush (bow) and sudarshan chakra (a spinning discus) respectively, our baba (Adityanath) has a bulldozer.” So have his other colleagues elsewhere, who tear apart the very structures of plurality, democracy and dissent – with the indulgence of the mastermind.