Bru Repatriation: 289 of More Than 4,000 Families Return to Mizoram

"Those unwilling to return to Mizoram should be allowed to stay put in Tripura," state home minister Lalchamliana said. 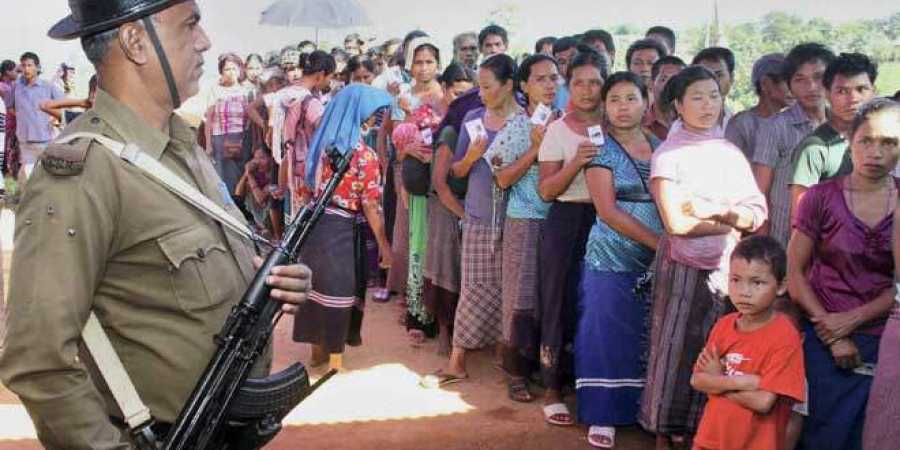 File photo of Bru refugees lining up to cast their vote during an election. Photo PTI

Aizawl: Altogether 1,165 Brus, belonging to 289 families, returned to Mizoram from the six relief camps of Tripura during the ninth round of the government-sponsored repatriation process, which concluded on November 30, a state home department official said on Sunday.

The repatriation exercise was the final attempt at bringing back the 4,447 Bru families – identified by the state as its bona fide residents who fled to the neighbouring state during an ethnic clash over two decades ago, he said.

Officials who were posted at the Mizoram-Tripura- Bangladesh border since October 3, when the process began, have returned to their respective district headquarters.

The repatriation process was undertaken despite opposition from different representatives of the Bru community, who demanded resettlement in their area of choice, the home department official said.

The Mizoram government had earlier informed the Centre that the final round of the Bru repatriation exercise would conclude on November 30 and all officials would be withdrawn by Saturday evening.

In a letter to Satyendra Garg, Joint Secretary (North East), Ministry of Home Affairs, on Friday, Deputy Secretary for Home David H Lalthangliana said all Mizoram government officials and hired vehicles, deployed at the Mizoram-Tripura border for the repatriation process, would be withdrawn from the evening of November 30.

It also asserted that Mizoram would not facilitate their return beyond November 30.

State home minister Lalchamliana told PTI that the government had taken several initiatives to repatriate the Brus from the Tripura relief camps, despite stiff resistance from several quarters.

He asserted that the state would no longer make any effort to bring back the remaining Brus.

“Those unwilling to return to Mizoram should be allowed to stay put in Tripura,” he said.

Earlier this year, the Centre had announced that the just-concluded repatriation efforts would be the last and final one and relief camps in Tripura would be subsequently closed with immediate suspension of free ration and cash-dole.

As part of the rehabilitation package, it promised to deposit Rs 4 lakh in the bank account of every repatriated family, along with a sum of Rs 1.5 lakh as housing assistance, free ration, and Rs 5,000 per month for a period of two years.