While the workers had hoped that the corporation would heed their demands, they were accused of violating special laws during the pandemic and arrested. 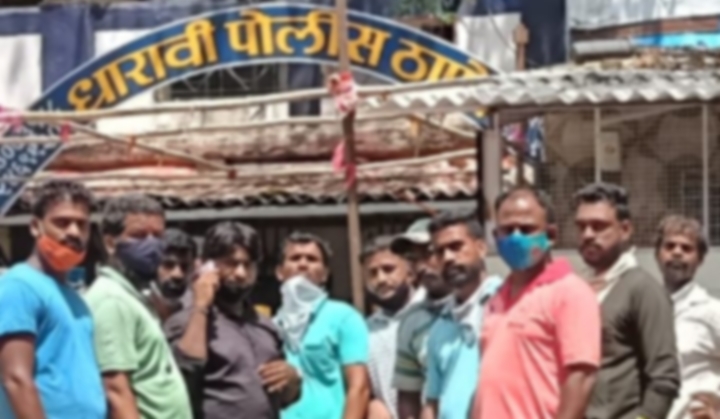 The BMC workers near the Dharavi police station. Photo: By arrangement

Mumbai: In May last year, when Mumbai was facing the wrath of the second wave of COVID-19, a group of 20-25 sanitation workers had gathered outside the G North ward office of the Brihanmumbai Municipal Corporation (BMC). They had been working for over a decade as contractual employees but wanted to demand some of their most basic rights: adequate gloves and masks while at work. The workers had hoped that their collective representation would push the municipal corporation to meet their demands. Instead, they were accused of violating special laws imposed during the pandemic and arrested and eventually released on bail.

Close to a year later, the workers continue to face trial. Their demands, however, remain ignored.

43-year-old Shankar Kunchikorve, named as the “first accused” in the case, says he has worked with the BMC for over 12 years. “And each moment spent at the workplace was filled with neglect and humiliation,” he says. Shankar says, as contracted labourers, they are the worst treated and are expected to carry out the most difficult work.

“We continued to endure the ill-treatment for a very long time. But in the pandemic, we knew we could die. So, we demanded the contractors to provide us with gloves and masks on a daily basis,” Shankar adds.

All the workers belong to a nomadic community which traditionally handled monkeys and have worked for close to a decade with the corporation. This community has had a long history of criminalisation and they feel the corporation acted with bias against them and their caste identity made them an easy target.

The sanitation work across the corporation is handled by those belonging to marginalised caste identities. Their working condition is abysmal and their demands are seldom met. A large number of workers continue to work on contract and the BMC has done little to make them permanent employees.

Shankar and others, through the workers’ union, have already filed a petition for a permanent post in the BMC that is pending before the Bombay high court.

Shankar says, the corporation doesn’t miss out on a single opportunity to cause trouble for them. In the second wave of the pandemic, when many workers fell ill, the labourers worried for their wellbeing. “We would have to hop from one gully to another, looking for houses where people had fallen sick because of COVID-19. We had to pick waste from the houses of those infected and handle it with our bare hands. Anyone who demanded protective gear would be told to shut up or never come back to work.” Subsequently, Shankar claims, many workers fell ill.

The contracted labourers have not been treated as frontline workers or, in the government’s terminology, “COVID Yodha” or COVID warriors, Shankar adds. In the silent protest, the labourers were hoping to bring the BMC administration’s attention to their daily woes.

But since the state government had imposed a blanket restriction over public gatherings, the workers were booked under section 188 of the Indian Penal Code for “disobedience to order duly promulgated by public servant”, section 269 for “unlawfully or negligently indulging in an act which knows is likely to spread the infection of any disease dangerous to life” and others. Some of these sections are punishable with imprisonment of either description for a term which may extend to six months, or with fine, or with both.

The complainant in the case, a police constable, has claimed that the accused persons had gathered without a mask. The labourers have denied the accusation.

The workers say they set out to work every day for over eight hours, working in the same group, but that act was never considered to be “unlawful”. “But it suddenly became an illegal act when we asked for our basic rights,” one of the workers, named in the FIR, said.

Since the workers are all on contract and are paid for their daily work, every court visit means loss of pay. And the labourers have had to visit the court on multiple occasions, only to be informed of the next date for hearing.

Their lawyer Maitrayee Gadhave says that while the police were prompt to file the chargesheet, a copy of it – which is every accused person’s right – was not made available for many months. “Finally, one copy was handed over in December and other accused were asked to take photocopies of the chargesheet,” the lawyer said.