No fewer than 20 members of police personnel were involved in escorting Bilkis, the face of the Shaheen Bagh anti-CAA protests, away from the site. Police have said she was only 'requested' to go back over security concerns. 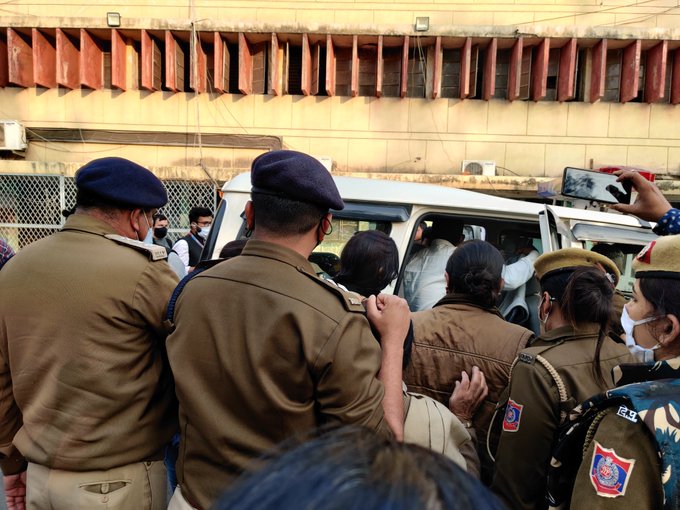 New Delhi: Delhi Police has stopped Bilkis Bano, the ‘Dadi’ who became a symbol of the anti-CAA protests at Shaheen Bagh, from entering the site at the Singhu Delhi-Haryana border where she was supposed to join farmers protesting against the farm laws, in solidarity.

The Wire’s Ismat Ara has tweeted from the ground that no fewer than 20 members of police personnel were involved in escorting Bilkis, an 82-year-old woman, from the site. Bilkis’s son has informed The Wire that police first took her to Shaheen Bagh police station and then sent her home after detaining her there briefly.

At least twenty police officials have escorted an 82-year-old woman out of the protest site. pic.twitter.com/vdGoHF0jMm

When contacted, Gaurav Sharma, Deputy Commissioner of Police, Outer North Range, told The Wire that “no detention had taken place” and that police personnel had found it their duty to accompany the “senior citizen” to safety.

“Yesterday also some persons from outside tried to come here and they were not at all welcome. In fact, there was a small incident of manhandling also. Being a senior citizen lady, and in concern of security only, she was requested to go back,” Sharma said.

The fact that Bilkis Dadi, who has been in TIME magazine’s list of 100 most influential people and BBC’s list of 100 women of 2020, was extending solidarity to the farmers at the border had made news.

Consequently, there had been pitched media presence at around 3.30 pm, when Bilkis reached the area.

When asked by The Wire as to why police were not allowing Bilkis to participate in the protest, a police official at the ground said, “They should just let it be a farmers’ protest.”

Before leaving for the Singhu border, Bilkis had said that she was eager to raise her voice for the rights of the people. “If I need to protest through the night, I will,” she had said.

I speak to #BilkisDadi as she leaves for Dilli-Haryana border from Shaheen Bagh. More on @thewire_in tonight. pic.twitter.com/Z6bc88QWYr

Farmers at Singhu, many of whom have reached the spot after having been on the receiving end of barbed wire, barricades, water cannon and teargas shells, have been braving the night chill as they wait for the Centre to acquiesce to clear demands of a repeal of the farm laws or an introduction of a new law ensuring minimum support price for crops.

As thousands of farmers remained at the Singhu and Tikri borders, unwilling to move to a designated protest spot at Burari, the Centre was forced to bring forward the December 3 ‘meeting’ date it had set for further conversations with farmers.

Note: The story has been updated with the police’s version of events.