"With the imposition of the curfew, there was no work and the shopkeepers also stopped lending us anything," said Sonamati Devi, mother of the eight-year-old boy.

Patna/Arrah: The impact of imposing a lockdown without any preparations is beginning to show.

An eight-year-old boy, a resident of Arrah’s Jawahar Tola’s slum area in Bhojpur district merely 60 km away from the capital of Bihar, allegedly starved to death due to lack of work, and subsequently food, during the current lockdown.

The young boy, Rakesh Musahar, who hailed from the Mahadalit Musahar community, was a ragpicker and sold junk in the market while his father Durga Prasad Musahar was a porter.

Amidst fears of the spread of the new coronavirus, the Central government announced a three-week lockdown starting from March 24. The state governments have also been directed to ensure strict implementation of the lockdown in their respective states.

After the lockdown was imposed, the father-son duo could not find any work as a result of which there was no ration at home.

Speaking to The Wire over the phone, Rakesh’s mother Sonamati Devi said, “Ever since the curfew started, no food was cooked at home. Rakesh was already ill. He had a bit of roti the night the curfew was imposed. After that, we did not have any food cooked at our home. We would have surely cooked something if we had any ration.”

Together, the father and son managed to earn Rs 200 to Rs 250 per day. “From that money we purchased food items and cooked a meal. With the imposition of the curfew, there was no work and the shopkeepers also stopped lending us anything,” said Sonamati Devi.

Rakesh had a fever and diarrhoea as well. On March 26, he was taken to the Sadar hospital where the doctor prescribed a syrup and a tablet for him. “We did not even have the money for medicine, so I borrowed some money from a neighbour and bought the medicine. But he died before he could even take the medicine,” said Devi.

Rakesh’s aunt also confirms that after the curfew started, the family had not cooked a meal at home. She said, “They could not cook anything because they had no ration. Because of the curfew, there was no scrap dealing work. Rakesh had become very weak as a result of starvation as he was already sick.”

Sonamati Devi has two more children and is pregnant with another child. Durga Prasad has been unable to find ration for the last one year. “The ration card bears my mother-in-law’s name,” said Sonamati. “We used to get ration on her thumbprint. We stopped getting the ration ever since she passed away a year ago.” 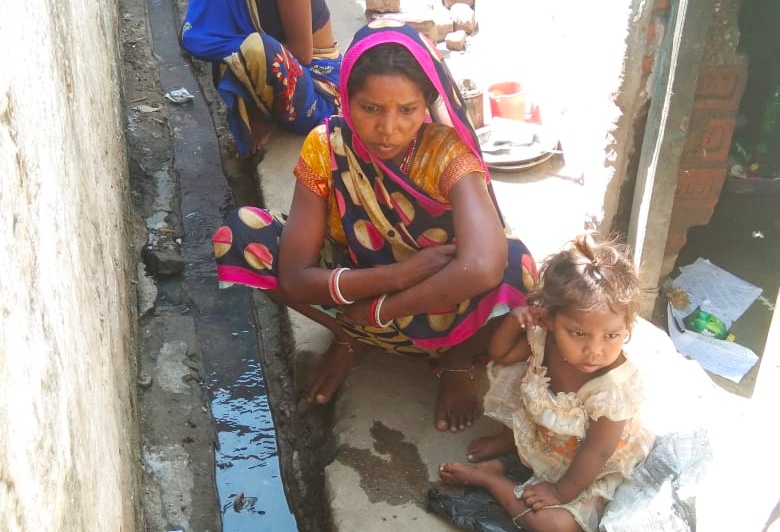 According to Durga Prasad’s neighbours, Rakesh died in the afternoon on March 26. His family waited for several hours for local administrative officials to come and make arrangements. However, nobody arrived.

Dejected, Durga Prasad and a few other locals finally carried the boy’s body on a cart on the night of March 26 and cremated him.

A postmortem, which is a basic procedure in the case of any unnatural death and helps in ascertaining whether a person had died of starvation or due to some other reason, was forgone. If an autopsy report were to find that there was no body fat and that the stomach was completely empty, then it the cause of death could be ascertained to be malnutrition and hunger. But in this case, the police showed no interest in undertaking an autopsy for the body. On the contrary, it was alleged that the police even wanted to hasten the burial of the dead body.

Local ward councillor Satyadev Ram said, “The DM and local SDO were informed of the child’s death but no response has been received from them so far. On the night of March 26, when the body was being taken for cremation, officials from the Nawada police station arrived and asked us to cremate the body quickly.”

When the SHO of Nawada police station was contacted in this regard, he told us to call later. We also tried to contact district magistrate Roshan Kushwaha several times, but he did not take the call. The story will be updated as and when any response is received from them.

It may be noted that in February last year, two children from the Musahar community died in Koransarai in Buxar district. Their family members said that no food had been cooked at their home for several days as the father of the children had been in jail for several months and they had no access to the ration provided by the government.

In this case as well, no autopsy was conducted and the DM dismissed the claim that the children had died of starvation.

The Musahars are considered the most backward community in society. Members of this community chiefly reside in Jharkhand, Bihar, Uttar Pradesh and West Bengal. Of the total Musahar community, 88.6% live in Bihar and are called Mahadalits.

According to the 2011 Census, Musahars have a population of 4,945,165 in Bihar. They do not own land and literacy rate within the community is at 4.6% which is the lowest when compared to 23 other communities in the scheduled castes.

They earn a day’s meal after working long hours as daily wage labourers in fields or in brick kilns. Musahars living in cities are mostly rag pickers and sell junk. Prior to the prohibition in Bihar, they used to make Mahua liquor but after the ban in 2016, that business also ended.

Also read: The Challenges of Managing a Hunger Crisis Amidst a Public Health Emergency

After the lockdown, the Bihar government announced that it would provide ration and cash to workers from the unorganised sector, but no government aid has reached this slum area in Arrah yet.

Satyadev Ram said that on behalf of his party CPI(ML), 34 families have been identified and provided with 10 kg flour and wheat each. He said, “The members of this community eat from what they earn each day. The lockdown will pose difficulties for them. We are marking more such families in order to help them.”