Despite the EC's clear guidelines, many persons with disabilities said they could not get voter identity cards made or found wheelchairs and pick-and-drop facilities missing. 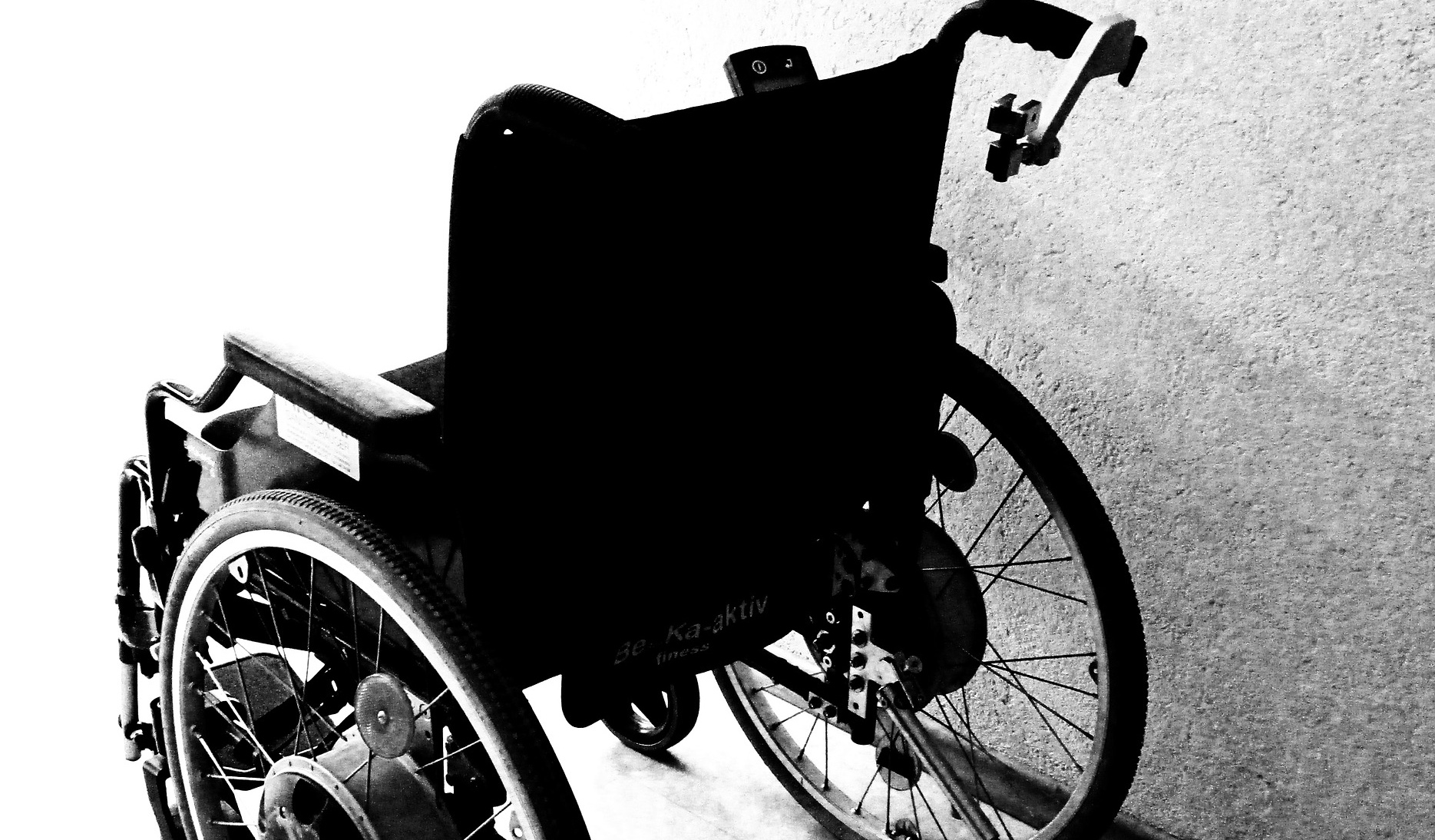 New Delhi: A disabled independent researcher working with the State Commissioner for Persons with Disabilities in Bihar has highlighted how despite clear instructions and guidelines from the Election Commission of India for making the assembly polls “accessible”, a large number of persons with disability (PwD) faced immense problems in reaching the polling booths and casting their vote.

Moreover, Harsh Raj, who surveyed several constituencies in and around Patna and interviewed PwDs during the first and second phase of voting on October 28 and November 3 respectively, also told The Wire that when he visited the office of the chief electoral officer, Patna to highlight the problems being faced by PwDs, he was appalled to note that the office itself was not accessible and had no wheelchairs. “As such, I had to crawl with my hands to the third floor to meet the officials,” he said.

Raj and his associates Himangshu Kumar and Manikantha Nataraj had published a report in September on “Situation Assessment of Persons with Disabilities in Bihar 2018-2020: A Review of Employment, Poverty and Welfare Policies” for the Office of the Bihar State Commissioner for Persons with Disabilities. Raj said during his interaction with various PwDs during the election, he realised that they were facing all kinds of problems that prevented them from voting.

Incidentally, this report highlighted many of the problems faced by PwDs in the state regarding which several of them also spoke on the camera during the polls.

The report noted among other things that most PwDs did not access public transport services and did not visit public buildings; Bihar’s disabled population was poorer in terms of consumption expenditure, compared to the rest of India; 43% of both the rural and urban disabled population were below the poverty line fixed by the Rangarajan Committee in 2014 and only 33% of PwDs had a disability certificate, and less than 50% of the eligible PwDs received pensions.

These aspects of the findings were established when Raj interviewed a number of PwDs. 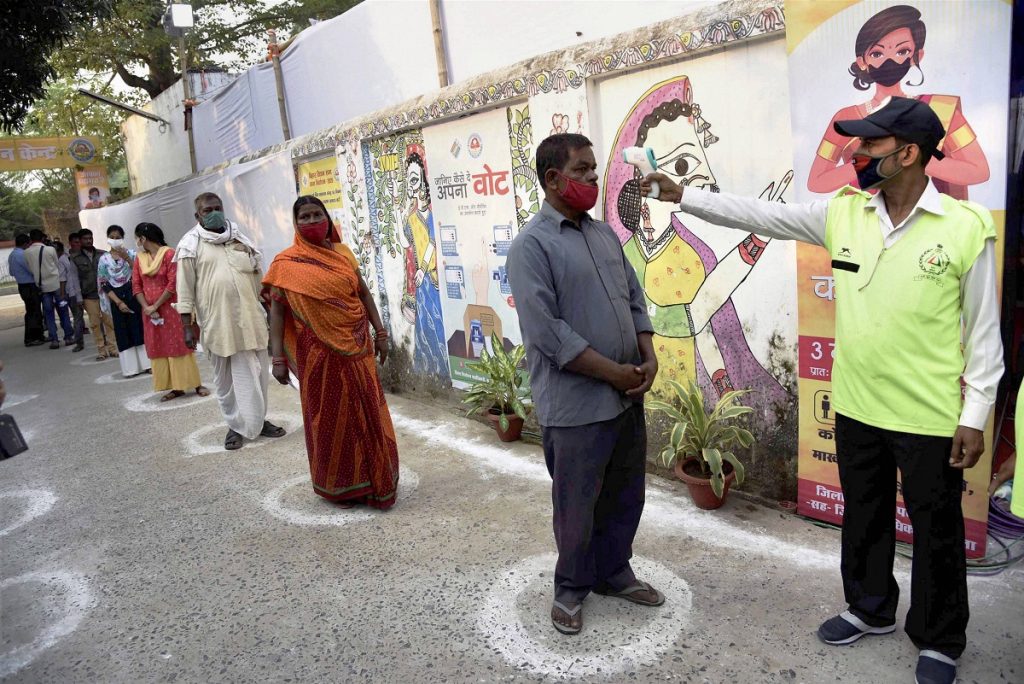 Voters undergo thermal screening at a polling station before casting their votes during the second phase of Bihar assembly elections in Patna, November 3, 2020. Photo: PTI

Sanjay Kumar, a polio-affected PwD who resides in Daryapur, said he could not vote because his name was not on the voter list. “When I ask, they say it would be added in the voter list for the next elections. But every time it is not there.” He also said he does not have a working wheelchair since his old one broke, and he has to move around with the support of his hands.

As for a disability pension, he said, he gets Rs 400 per month, a paltry sum. And he receives this amount just for six months a year. He said he was also not getting rations under the public distribution system.

Another Pwd, who has a wheelchair of his own, said he voted in the first phase on October 28, but said there was no wheelchair in the booth. “But I managed to go in with the help of my crutches and cast my vote,” he added.

A resident of Thona, Mohammad Pappu, while displaying his Aadhaar card, said no one helped him at the GPO polling station in Patna and there was also no wheelchair there. While the Election Commission had directed that vehicles should be arranged for transporting persons with disabilities, Pappu, who lost both his feet, said there was no such facility in his area.

Joginder Kumar Gupta, who has an impairment in his leg, said he had to walk all the way from Boring Road to his booth in the Zakir Hussain Institute to cast his vote. His area also did not have the pick-and-drop facility.

Chander Kumar, who is registered to vote in the Jigha assembly constituency, said in his polling station there was neither a wheelchair available nor any sewa mitra (assistant) to help PwDs. “I took my brother along to cast my vote.” He charged that vested interests were looting the exchequer in the name of providing facilities for the disabled, but it is evident that there are no facilities.

‘Even CEO Patna office did not have a wheelchair’

Harsh Raj, while speaking to The Wire, from outside the office of the chief electoral officer, Patna, said in the first and second phase of voting, he and his team discovered that while the facility for wheelchair and ramps was available in some polling stations, it was absent in most.

He said after the first phase of voting, when he received a lot of complaints about the absence of this basic facility, he approached the office of the CEO, Patna. He said the officials there told him that the officials were conducting “accessible elections”.

However, Raj said he found the office of CEO to be inaccessible. “There was no facility for a wheelchair here and I had to crawl on my hands to reach the third floor to meet the concerned officials.”

An independent researcher, Raj said during the monitoring of the polling on October 28 and November 3, when he visited Bakhtiarpur, Danapur and Patna Sahib assembly segments, he found that a large number of booths were inaccessible.

Also Read: Not All Wheelchairs Are the Same. Our Politicians Need to Recognise That.

Meanwhile, disability rights activist and member of the State Steering Committee on Accessible Elections in Delhi, Satendra Singh, has written to the chief election commissioner and other EC officials and the director of the Department of Empowerment of Persons with Disabilities in the Ministry of Social Justice and Empowerment about the issues highlighted by Raj through his findings.

Singh lamented that “despite the efforts by ECI to make elections inclusive and accessible, unfortunately, the efforts are proving to be insufficient because of the lack and will of statutory officers whose job is to uphold the constitution of India and the dignity of its citizens.”

He demanded that to ensure that the mammoth exercise done by its accessibility division was not wasted, the Election Commission should among other things direct all States to submit compliance reports on the accessibility status of their CEO office premises along with the access audit report done if any.