Bihar: 'Leaders Ask for Votes by Saying They Will Build a Bridge, but Nothing Changes'

On the UP-Bihar border, some villages on the banks of the Gandak river in West Champaran's Valmikinagar assembly constituency are connected only by boats.

People of Dhumnagar village waiting for the boat on the banks of Gandak river. Photo: Manoj Singh/The Wire

West Champaran: On the bank of the Gandak river, two dozen people are waiting for a boat near Dhumnagar village’s Bharpatia Tola in West Champaran’s Thakraha block. A small boat has just left the bank, ferrying six-seven people. Anxious to reach their village before it gets dark, the villagers urge the boatman to return soon. There are two other boats anchored at the bank but they are used for catching fish.

The people waiting for the boat have to return to their village, two kilometres east of the Gandak river. They had crossed the river to set up shops in the market near the border of Bihar and Uttar Pradesh.

“It is a daily struggle for us,” says Hadees Ansari, a Dhumnagar resident. “There are few boats and the ride to the other side takes more than half an hour. We’ll have to sit here and wait for the boat to return. We haven’t got more boats because at a short distance from here, there is another bank where a Pipa (floating) bridge was supposed to be installed on October 15. But it wasn’t.”

The village is located at the far end of the Valmiki Nagar assembly constituency of West Champaran, at the border of Uttar Pradesh and Bihar.

Four villages comprise the Dhumnagar gram panchayat area: Bharpatia, Dhumnagar, Kharkhunta and Kusshan. While the latter three villages are located east of the river, the former, that is Bharpatia Tola, is situated near the embankment across the river.

Also Read: Bihar Ground Report: In a Forsaken Village He Used His Savings to Buy a Boat Instead of a House

There are two embankments on the Gandak – one between Thakraha and Dhanha in the west and another towards the southeast.

Official records say 60 families reside in Bharpatia village, adjacent to the embankment. But only a few houses are left here. The village got its name from the majority population of Rajbhar community, but frequent floods and erosion have displaced many people every year.

Most of them have settled down at Rampur Barhan village in Barwa Patti police station area of Uttar Pradesh’s Kushinagar district.

Bharpatia has a higher secondary school. About 100 metres away from the embankment, a cement brick platform was constructed. A month before the state assembly polls were announced, the supply of piped drinking water also began under the Chief Minister Rural Drinking Water Resolve Programme on August 28. 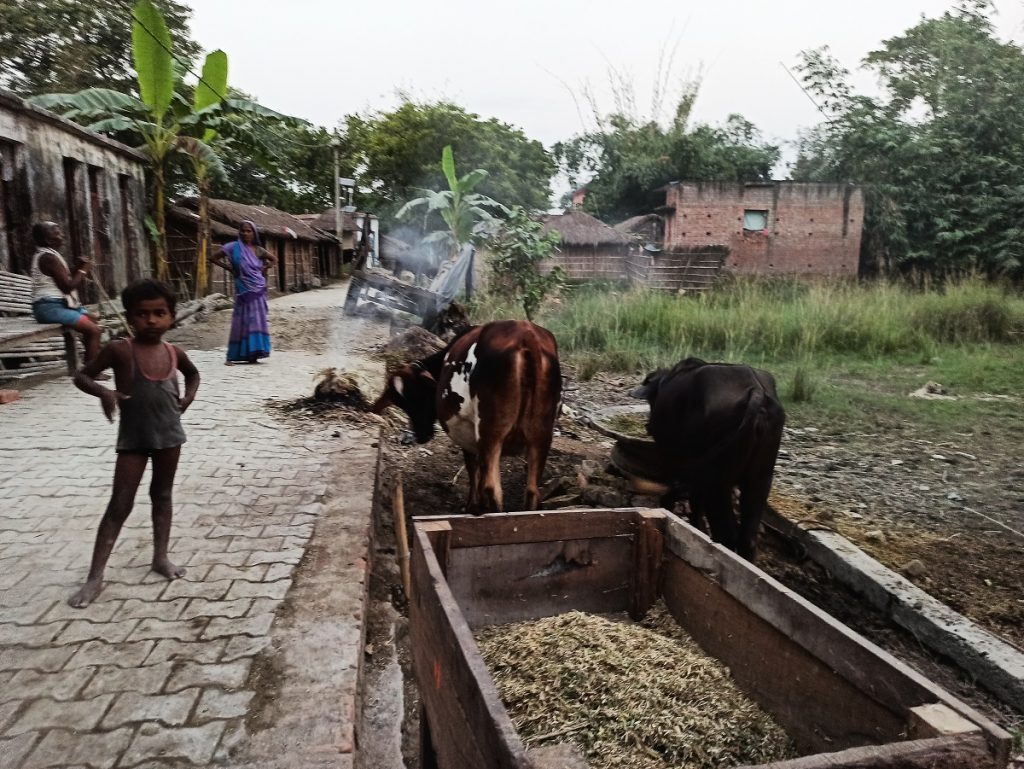 This has provided relief to many like Kanti Devi. As she fills up her bucket with water from a tap installed near her house, she says that she no longer has to walk until the hand pump. However, another local resident Ramawati, who lives barely 600 metres from Kanti Devi’s house, has neither a hand pump nor a water tap in her vicinity. “Had a hand pump been installed here, I wouldn’t have to walk until the school to get water,” she says.

Bihari Yadav is in charge of the piped water supply in the village. He says he had been promised Rs 1,000 per month. But so far, he hasn’t received a single month’s salary.

The public toilet built near Kanti Devi’s house is in a dilapidated condition. It was constructed nearly a decade ago. It was damaged during a flood and has been lying in the same condition since then.

Between the Gandak river and the village, several sugarcane fields appear sporadically in Siwan. There is no paddy crop in sight. “Each vacant plot that you came across on the way was a paddy field. Not a single grain has been produced this year,” says Bihari Yadav.

With 200 families living on the other side of the river, the total number of voters in all four villages is 582.

In 1979, flooding and erosion completely washed away three villages of the Dhumnagar gram panchayat – Dhumnagar, Kharkhunta and Kusshan. The stream of the river now flows through the area where the villages were once situated. People who got displaced from the region settled down in Bharpatia, Thakraha or 20-25 km away in UP. Those who could not find a place to resettle started living in the catchment area of the river again.

As the displaced families were not rehabilitated, all of them had to purchase plots of land in UP and Bihar. With no other source of income, they prepared their flood-affected croplands for cultivation once again after putting in enormous efforts into it. Paddy, wheat and sugarcane are the staple crops of the region.

The people who settled in UP’s Rampur Barhan and other villages, stay there only as long as their native villages are flooded. When the floodwater recedes, they move back to their villages and start tilling their lands. They usually take a boat ride. However, when the water level goes down, a Pipa bridge is installed which provides easy passage to them.

At UP’s Rampur Barhan village, a little distance from Bharpatia, 76-year-old Harihar Yadav says that he purchased land for Rs 1,000 per katta during the 1980s and built a house. His field is across the river in Dhumnagar. Another resident, Ram Shankar Saha also lives in Rampur Barhan but frequents Dhumnagar for cultivation.

This year, the floodwater damaged the paddy crop entirely on both sides of the river. Whatever was left, got infected and the local farmers incurred heavy losses. But they neither received any benefit under the Bihar state crop assistance scheme, nor the Rs 6,000 which was announced as flood relief. In 2017, those affected by the flood received the relief amount. The farmers claim that though the flood caused more devastation this year, the government has not offered them any compensation yet. 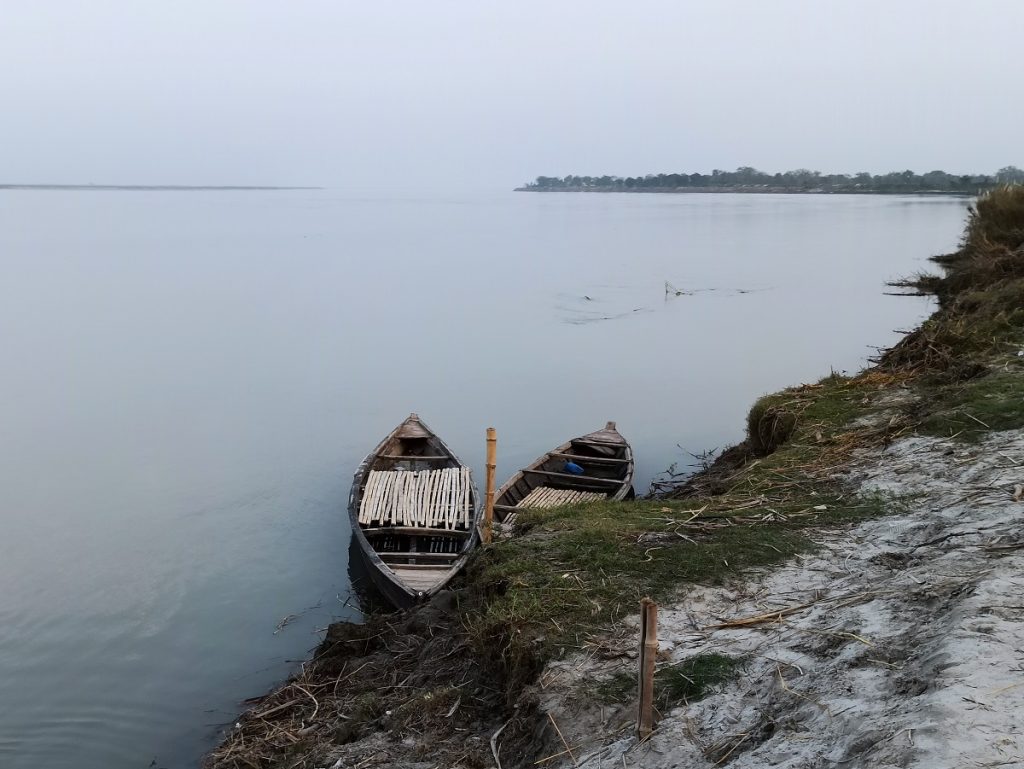 Some people had sown sugarcane but the flood destroyed it too. According to Harihar Yadav, only a fourth of the sugarcane crop could be saved from the flood.

The sugar mills in UP also do not buy their crop, as a result of which they have to sell it to a crusher or an intermediary at a maximum price of Rs 200 per quintal.

Between the last week of June and September, the village faced several rounds of flooding. On one occasion, the flood water kept standing in the village for 15-20 days.

Journalist Dheeraj Srivastava, who hails from the village, says that almost all the paddy and kharif crops in Dhumnagar and Srinagar panchayat areas and 40% of crops in Motipur are damaged by floods every year.

The demand for a bridge

The primary demand of the residents is the construction of a permanent pucca bridge connecting Thakraha to Patijarwa. The bridge would make not just Dhumnagar accessibl, but other panchayat areas as well. It will ease the movement of the people to farmlands, as well as the market.

The locals wanted the Pipa bridge to be installed by October 15 until the pucca bridge is constructed. The villagers complain that the authorities get the Pipa bridge removed within two-three months. As a result, they are unable to transport the harvested wheat crop to the market.

The locals are disappointed and miffed with the authorities, as well as the political leaders of the area, for not paying heed to their demands. Owing to the tough geographical terrain of the region, they have been isolated.

“We raised our voice several times but no one listens to us,” says Rajkumar Gupta. “MLAs, MPs and the candidates visit us at the time of elections. We are told that the matter was discussed in the assembly. Sometimes they claim they are helpless as they are not in power. They ask for votes and promise to get the bridge constructed. They make the same promise to get our votes each time but our situation has not improved.”

According to ward secretary Ratan Kumar Patel, in two years, only 60 people have been granted compensation for building a house. But how can they construct a house when they cannot transport the material to the village in the absence of a bridge?

The three villages on the other side of the river have not yet been electrified and do not even have a school. It is not possible for children to cross the river to attend school at Bharpatia.

“Our polling booth is the school in Bharpatia this year,” says Hafiz Ansari. “We will have to cross the river for it. If the authorities make arrangements for boats, only then will people be able to cast their votes.”

The demand for a bridge has gathered momentum during the past decade, says Dheeraj Srivastava. The bridge would benefit not only the people in Dhumnagar panchayat area but many other remote and isolated villages situated between the various streams of the Gandak river. Villages like Srinagar, Motipur, Jajirha, Koilpatti, Harpur and others will be connected with the panchayat district headquarters.

At present, the block headquarters of Dhumnagar Panchayat area is in Thakraha across the river. It is also the closest market. The markets in Tamkuhiraj and Dudhi in UP are also quite near. However, the district headquarters in Betia and the police headquarters in Bagha are both across the river. If the residents of these villages have to visit Betia or Bagha, they must go via Tamkuhi Raj-Gopalganj in UP or Dudhi-Dhanha, Chautarwa, and Lauria after covering more than 100 km.

Asking this reporter to stay a little longer in the village, Harihar Yadav says, “You will get to know of our sufferings if you spend a night here. That’s when we discuss our problems. The MLAs and MPs never come to hear our problems. When Hardev Master was the MLA, he used to come frequently and meet everybody. That was in 1988-89. Nobody visits us now. One former MLA did come rarely, but the current MLA hasn’t even come to take a peek. No MP has ever visited us. We think that they are afraid that the land here may bite them.”

When asked about the on-going assembly elections, he says, “The elections look a lot different this time.”