Centre Runs out of Compensation Funds for Bhopal Gas Victims

Nearly 50,000 survivors have been compensated since the tragedy in 1984, but around 48,000 claimants are yet to receive their payments. 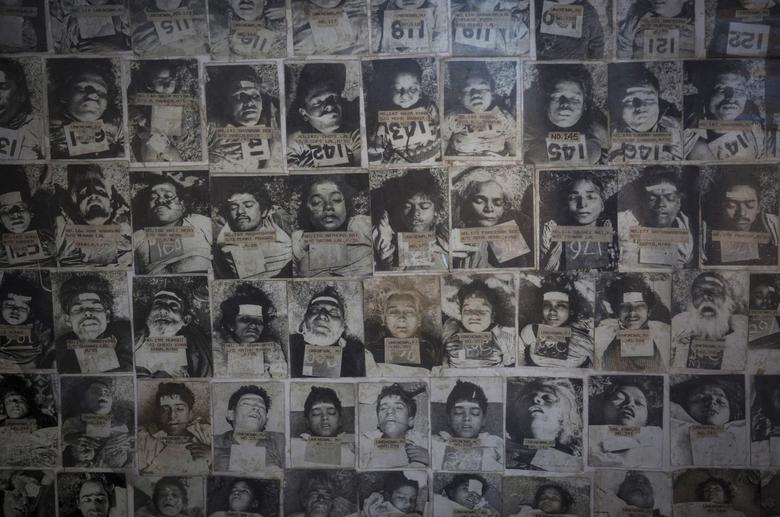 A panel displays pictures of residents who died in the 1984 Bhopal disaster at the forensic department of a hospital in Bhopal November 14, 2014. Photo: Reuters/Danish Siddiqui

New Delhi: The Union Ministry of Chemical and Fertilizers has stopped disbursing compensation for Bhopal gas tragedy survivors. According to a letter issued by the ministry in February 2019, it is still looking to secure Rs 61.72 crore for 3,629 cases which are pending approval.

According to the Hindu, the Centre may still run out of funds to pay them compensation. The Union government’s welfare commissioner’s office in Bhopal in July 2018 had sent a proposal to include an additional 3,629 cases for compensation but the Centre has still not acted on the request.

In the meantime, the number of eligible survivors who should be compensated has increased – a significant chunk of which have moved the appellate court in Bhopal to hear their appeals. More than 200 new cases of permanent and partial disability have been granted approval for compensation but are still awaiting their payments.

Watch: Even the Modi Govt Has Been Insensitive to Us: Bhopal Gas Tragedy Victims

The ministry had set aside Rs 874.28 crore in 2010 for disbursement of ex gratia but according to the Standing Committee on Chemicals and Fertilisers (2017-2018), the funds are fast drying up.

The Hindu reported that Sushant Huddan, the registrar (in-charge) of the welfare commissioner’s office, in a letter to the state government in June, said that if the compensation is not disbursed soon, it “may cause agitation among the claimants.”

Nearly 50,000 survivors have been compensated since the tragedy in 1984 but around 48,000 claimants are yet to receive their payments. The Centre has been struggling to tap adequate funds to compensate all, Rachna Dhingra of International Campaign for Justice in Bhopal told the Hindu.

The Centre, at a review meeting in June, thought of utilising the corpus fund of the Bhopal Memorial Hospital Trust (BMHT) – around Rs 891 crores – for banking to generate funds for survivors. Merging the BMHT with the All India Institute of Medical Sciences (AIIMS) was also mooted by a core group in the Union health ministry to facilitate the fund transfer. The idea, according to a department of health research official, was to use the interest generated from such steps to treat and support the survivors.

However, the Cabinet’s approval necessary for such a step is still pending. The minutes of the review meeting said that the law ministry had to be consulted for the dissolution of BMHT.

Since then, “all the payments to claimants have been frozen,” an official at the welfare commissioner’s office told the Hindu, adding that the Centre has to act on the proposals before they can initiate further payments. The official also said that that the Modi government on August 28 “had committed to facilitate some payments through the hospital, and later pay it back whenever a budget was finalised.”

However, activists say that dissolving the BMHT would require the Supreme Court’s approval. Dhingra said that the BMHT fund was set up on the instructions of the SC and “cannot be used for non-medical purposes.”