'Bangaldeshi Migrants' Evicted in Bengaluru Demolition Were From the Northeast, Karnataka

The residents were in possession of valid identity cards including Aadhaar, pan and voter ID, and those from Assam also showed that their names figured in the NRC. 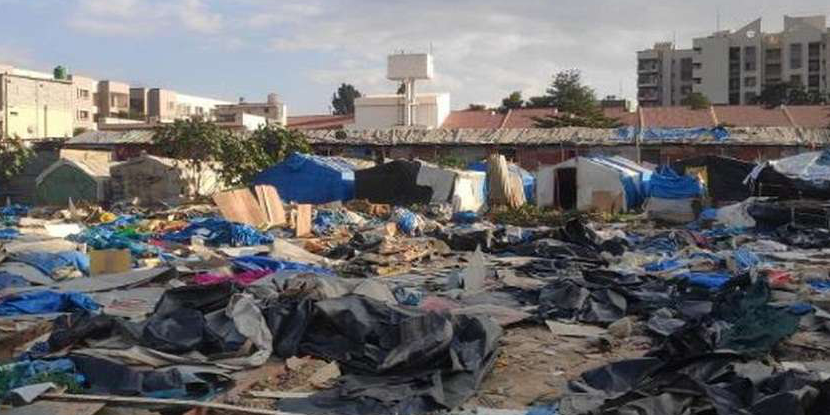 New Delhi: Days after the police in Bengaluru demolished more than 100 makeshift homes during an eviction drive in a locality in the suburb of Bellandur, claiming that the settlements belonged to “illegal” Bangladeshi immigrants, those who have been evicted established that they were from the Northeast and Karnataka by showing their valid identity cards, according to a report in News18.

After the shanties in North Bengaluru’s Kariyammana Agrahara were razed, the residents were allegedly asked to vacate the land. Water and electricity supply to the location was cut off three days ago.

In a letter, the Bruhat Bengaluru Mahanagara Palike (BBMP) said that the sheds in the locality had been illegally built by Bangladeshi immigrants who then proceeded to convert the area into a slum, which deteriorated conditions in the neighbourhood following which the municipality received several complaints.

Previously, the Bengaluru police had claimed that the shanties housed undocumented Bangladeshi immigrants and had furnished a notice to the owner to clear the encroachments and provide details of the residents.

DCP, Whitefield, M.N. Anucheth said that the police had not asked anyone to move. “We have asked the owners to furnish details of the residents there. This is after 60 Bangladeshi illegal immigrants were detained from North Bengaluru in October 2018.” He also said that he was not aware of the police asking them to vacate.

The notice issued by Marathahalli police station inspector to land owner Chethan Babu on January 11 for eviction, referred to viral videos which claimed that there was an illegal Bangladeshi settlement in Bellandur.

On January 12, BJP MLA Arvind Limbavalli of Mahadevapura constituency, where the locality is, tweeted a video of the slum and alleged that people had taken shelter in “illegally constructed sheds” and said that concerned authorities had been “instructed to take action against it”. Limbavalli also said that some of the residents were suspected to be “illegal immigrants of Bangladesh“.

Illegal activities were taking place in those Sheds and the environment was spoiled without cleanliness, hence the area was a site of illegal activity.
This was brought to my notice through social media. 2/3

The BBMP, on January 18, sent a letter to the police asking for protection during the removal of encroachments. However, the residents, who were mostly migrants from Assam, Tripura and from North Karnataka, displayed their valid identity cards. According to the report, the residents had identity cards including Aadhaar, pan and voter ID and those from Assam also showed that their names figured in the NRC.

The land owner also asserted that all the residents were Indians.

“People living in these sheds are from this country only, there are people from North Karnataka, North India and North East India. They all have their documents, but since we were issued a notice by the police, we evicted them,” said Chethan Babu, the land owner.

Several sheds in Kariyammana Agrahara near Marathahalli demolished, migrants from Assam, Tripura, some from North Karnataka allegedly asked to vacate.

Police had issued notice to the owners of the land on Jan 11 saying there were illegal Bangladeshi immigrants in pic.twitter.com/bpvPaxOcsU

“They came in search of Bangladeshis. But even after I told them I have my NRC certificate from Assam, they went ahead and demolished my shop where I lived,” Mohammed Nur Hussain Sheikh, who ran a grocery store, told the Telegraph.

A migrant from Assam, Ahadur Rahman, told News18 that the sheds were demolished around noon on Saturday. “People in civilian clothes asked us to clear the space. There was also a cop with them. We are not Bangladeshis. We have proof that we are Indians. We have come here to work and earn a living,” Rahman said.

Karanna from north Karnataka said, that he, his wife and their three children had been asked to move from the area. “”We don’t know what happened. I work as a mason here. We can’t find a place to live,” he said.