Locals claim that after personnel of the District Reserve Guard raided their protest site on December 9, they have been placed under virtual house arrest. 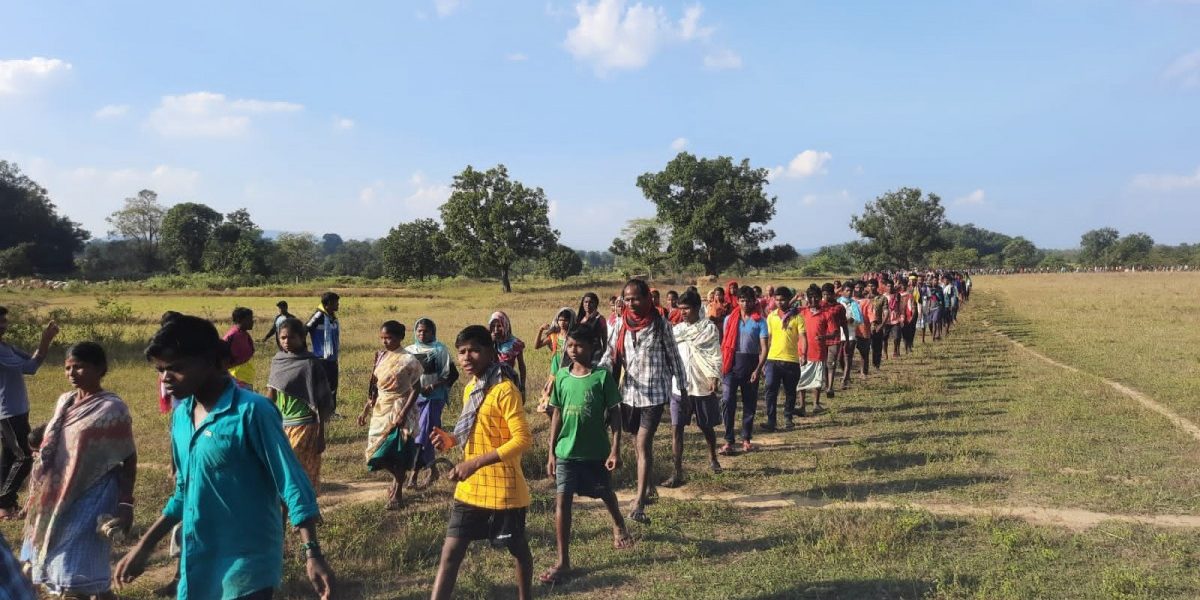 'The villagers allege that the DRG personnel dismantled the boundary around the stage, uprooted the protestors' tent and seized all the material.' Photo: Tameshwar Sinha

Bastar (Chhattisgarh): The prospect of the establishment of a police camp in Nahadi village, 70 km away from the Dantewada district headquarters, has had members of the tribal communities in 13 villages in Kuakonda development block in Chhattisgarh protesting for over a month now.

The residents of these villages are primarily demanding the establishment of a hospital, a school and an anganwadi, rather than a police camp.

Their demonstrations are also in support of the ongoing agitation in Silger village at the border of the rural Bijapur-Sukma district, where three people were killed and several others injured this May when the police opened fire on a group of tribes people protesting against the establishment of a Central Reserve Police Force camp in Sukma.

“If a police camp is set up here, it will be difficult for us to even leave our houses,” a resident of one of the 13 villages told The Wire. “It is always difficult to visit other villages or even the forest in the presence of a camp. The police personnel harass us and the women in our families. That’s why we don’t want a camp here. We need hospitals, anganwadis and schools instead.” ‘Afraid of the police’

Demanding action against the culprits of the Silger police firing this May, the 2012 killing of 17 Adivasis by the police in Sarkeguda in Bijapur, and the killing of four minors and four adults in Edesmetta of the same Bijapur district in 2013, the residents of the 13 villages began their agitation in support of a protest already in progress in the district.

But on December 9, 2021, personnel of the District Reserve Guard (DRG) including women commandos suddenly raided the protest site in Nahadi’s Karka area, assaulted the protestors and ordered them to vacate the premises.

Witnesses said that the DRG personnel had set fire to the stage at the protest site by lobbing burning logs at it from chulhas (earthen stoves) set up in the protestors’ makeshift kitchen.

However, soon after the incident, a video went viral on local WhatsApp groups in which villagers state that the fire had started in a nearby paddy field and moved to the protestors’ stage and that the DRG personnel had in fact extinguished the fire.

Locals claim that the police had shot the video themselves and circulated it.

This action by the DRG personnel has caused panic among villagers in Karka, claim residents of other villages. Rumours in the area claim that if the villagers of Karka even step out of their houses, they are interrogated by police personnel and threatened with dire consequences.

The Wire tried to confirm these rumours with local sources, but the villagers claim to be too afraid to speak to the media.