Bandipora: Anger on the Streets of Kashmir Over Rape of 3-Year-Old

Widespread protests broke out across the Valley over the rape of the girl in the Sumbal area of the district.

Across the Valley on Monday, people poured out onto the streets, demanding strict action against the culprit and a speedy trial. Credit: Junaid Bhat

On Monday, protests erupted in the Valley against the alleged rape of a three-year-old girl in Sumbal area of North Kashmir’s Bandipora district.

On the evening of May 8, the girl, according to her family, was walking back home from the Islamic seminary where she studies the Quran when a young local resident reportedly lured her away with some chewing gum. The boy reportedly took the girl to a nearby government school, where, the family says, he raped her in the toilet.

The accused carried out the crime during the time of iftar (an evening meal with which Muslims end their fast during the month of Ramadan) when most of the villagers were either in mosques or at home.

The police has arrested the accused, who has been identified as 20-year-old Tahir Ahmad of Mir, a car mechanic.

Also read: Backstory: How Do We Get Justice for a Raped Child?

Across the Valley on Monday, people, including girls and the elderly, poured out onto the streets, demanding strict action against the culprit and a speedy trial.

The protesting crowd carried banners and placards that read “Hang the Culprit”, “Justice for Victim Girl”, “Save Daughters”, “Dear Daughter We are Ashamed, the Criminal is Still Alive”, “End Rape Culture” and so on. “Had the government delivered justice in previous rape cases, we wouldn’t have witnessed this gruesome crime. The government official should hang their heads in shame,” a young woman told The Wire. “What happened in the Kathua case? She too was minor. By not taking strict actions against the criminals, the government is encouraging sick minded people to continue such heinous crimes.”

The protestors said they will continue their protest until the culprit is punished. “Our protest will turn any time violent if the action will not be taken. We want the government to hang the culprit in public,” said an angry protestor.

In many areas, the peaceful protests turned out violent. Security forces resorted to tear gas shelling to quell the protesting youth who were pelting stones. Dozens of people sustained injuries in daylong clashes. In some areas, the protests turned violent. Credit: Junaid Bhat

In the Pattan area of North Kashmir’s Baramulla district, at least 12 youth were injured after the violent clashes erupted between the youth and security forces. The one youth identified as Arshid Ahmad Dar was referred to Srinagar in a critical condition. Scores of young boys also received injuries during clashes with security forces in Srinagar.

Schools, colleges, shops and business establishments in many areas remained shut. The peaceful marches and clashes also affected the movement of traffic.

Religious organisation Itehadul Muslimeen called for a Valley-wide shutdown on Monday against the alleged rape of the minor girl.

Students of Kashmir University and Islamic University of Science and Technology (IUST) also staged peaceful protest rallies in their campuses. The students, along with the staff, demanded stern action against the accused.

“Am I safe?” a girl student of IUST asked. “A few weeks ago, a father raped his daughter in Bandipora and now this kid is the latest victim. How can we live among such beasts?”

“More than year have passed but the justice hasn’t yet delivered in Kathua rape case. We will not remain silent this time,” she added.

While speaking to the media in Srinagar, Divisional Commissioner Kashmir Baseer Ahmad Khan appealed the people to maintain the peace. He assured fast track investigation into the case.

“Action will be taken against the accused as per law,” he said. “I am monitoring the case and the governor has also ordered a time-bound enquiry.”

Also read: Kathua and After: Why the Death Penalty for Child Rape Will Not Deter Offenders

A special investigation team comprising SDPO Sumbal, SHO Sumbal and Senior Prosecuting Officer has been constituted to investigate into the case, the police said in a statement.

Police also said they have questioned the private school principal of Islamia Educational Trust Trigam who has allegedly issued a fake birth certificate in favour of the accused youth. Declaring the certificate fake, police said the accused is not a juvenile. So far, the police said, they have been treating the accused as an adult. “A group of senior doctors will conduct the age test, and the age of accused boy will be determined on the basis of medical test,” a police spokesperson said.

As a mark of solidarity with the rape victim, the Jammu and Kashmir High Court Bar Association (JKHCBA) on Monday abstained from court work.

Both separatists and mainstream politicians demanded harsh punishment for the perpetrator. Governor Satya Pal Malik has directed the concerned officials to work swiftly on the case.

People’s Democratic Party chief Mehbooba Mufti said shariah law seems appropriate for dealing with such cases. “Mortified to hear about the rape of a three-year-old girl in Sumbal,” Mufti tweeted. “What kind of a sick pervert would do this? Society often blames women for inviting unwanted attention but what was this child’s fault? Times like these, Shariah law seems apt so that such paedophiles are stoned to death.”

The rape of a child in Tirgaam is a travesty. @JmuKmrPolice must ensure a speedy investigation with only one consideration and that is to identify the guilty, prepare a watertight case & ensure exemplary punishment to those responsible.

“These child rapists are out there because we have failed as a society. This is our rot. The rapist is among us, facilitators are among us, those who shield rapists they are among us, stalkers are among us, abusers are among us,” bureaucrat-turned-politician Shah Faesal tweeted, demanding the justice for the child. “Those who are pelting stones on police should realise that we are misdirecting our anger. We should pelt these stones on ourselves. We are to be blamed for the hell we are experiencing.”

These child rapists are out there because we have failed as a society.

Those who are pelting stones on police should1/2

Terming the incident as a stain on the social fabric and rich culture of the state, octogenarian separatist leader Syed Ali asked people to keep a constant vigil against the breeding of social evils. 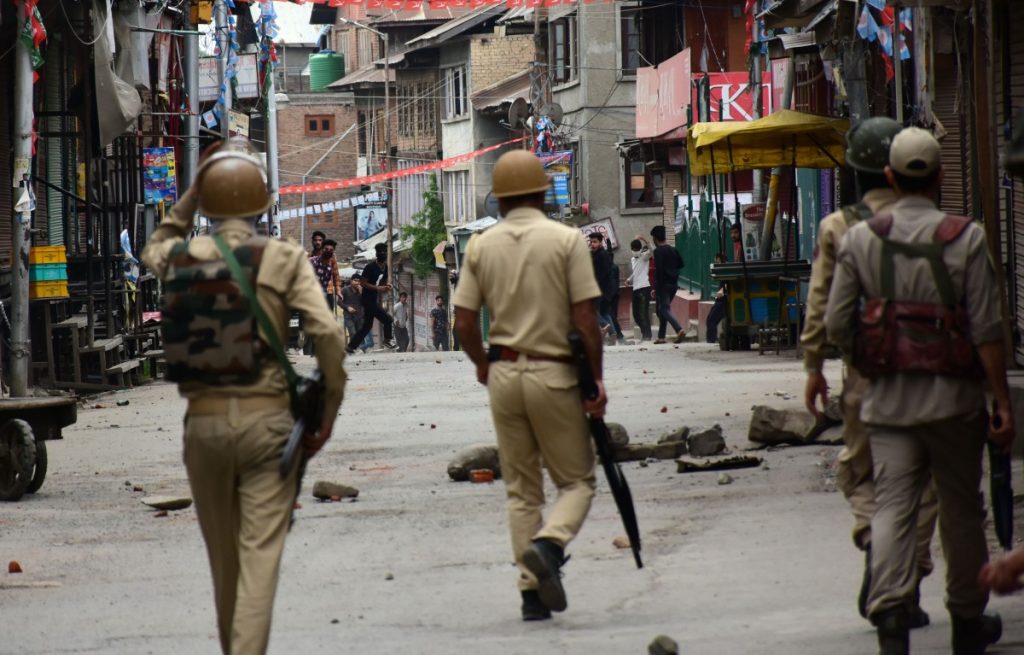 Protests broke out between security forces and people in many areas. Credit: Muzammil Mattoo

Mirwaiz Umar Farooq appealed the people to maintain law and introspect: “Fervent appeal to all people of Kashmir to maintain unity and vigil especially in view of mischievous forces waiting to create a sectarian divide out of this most reprehensible crime against a child which is indeed a crime against all humanity. All of Kashmir stands in unison…”

Deeply disturbed by the shocking heinous crime committed on a 3 year old child in Sumbal.Such repeated incidents raise a serious question mark on how much of our moral and religious values have been imbibed within us and are reflected in our collective behaviour as a society.