To introduce legislation that trumps the judicial process would create facts through majoritarian will, making it impossible to have a civil dialogue on the basis of a shared universe of facts.

To introduce legislation that trumps the judicial process would create facts through majoritarian will, making it impossible to have a civil dialogue on the basis of a shared universe of facts. 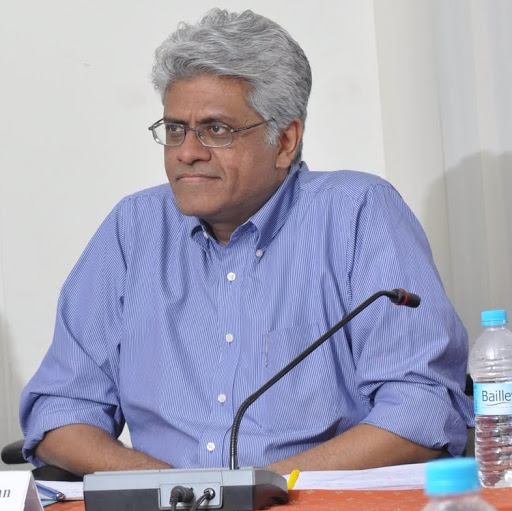 Inaugurating a statue of Sardar Vallabhbhai Patel built to epic scale in Gujarat, Prime Minister Narendra Modi pushed back against critics of the extravagant project. It was Patel who unified India, he said: but for him, Shiva bhakts would require visas to visit the lord’s shrine in the coastal Gujarat town of Somnath.

Modi’s investment in the Patel statue is part of a larger project of reshaping the pantheon of Indian nationalism. There is a strategic calculation at play here, since his main political challenge comes from the Congress, now securely under the control of the dynasty unwittingly founded by Jawaharlal Nehru. In the narration of Modi’s ideological fraternity, most of India’s contemporary woes originate in Nehru’s supersession of Patel in the leadership contest after independence.

Those attentive to historical nuance would also detect an effort to play on social cleavages, an effort at consolidating an electoral plurality through negative association with a supposedly alien faith. It is a strategy the Congress has chosen to play defence to, often engaging in ostentatious gestures of fealty to the “true” faith of the land.

During his campaign for legislative assembly elections in Gujarat last year, Congress president Rahul Gandhi, in what has become typical of the Congress’s equal opportunity pandering to sectarian loyalties, paid a visit to the Somnath temple. Modi was quick to taunt Gandhi with the dubious factoid that his great-grandfather Nehru had opposed the rebuilding of the temple. In contrast, Patel, said the prime minister, championed the project as an affirmation of national identity soon after India’s independence. 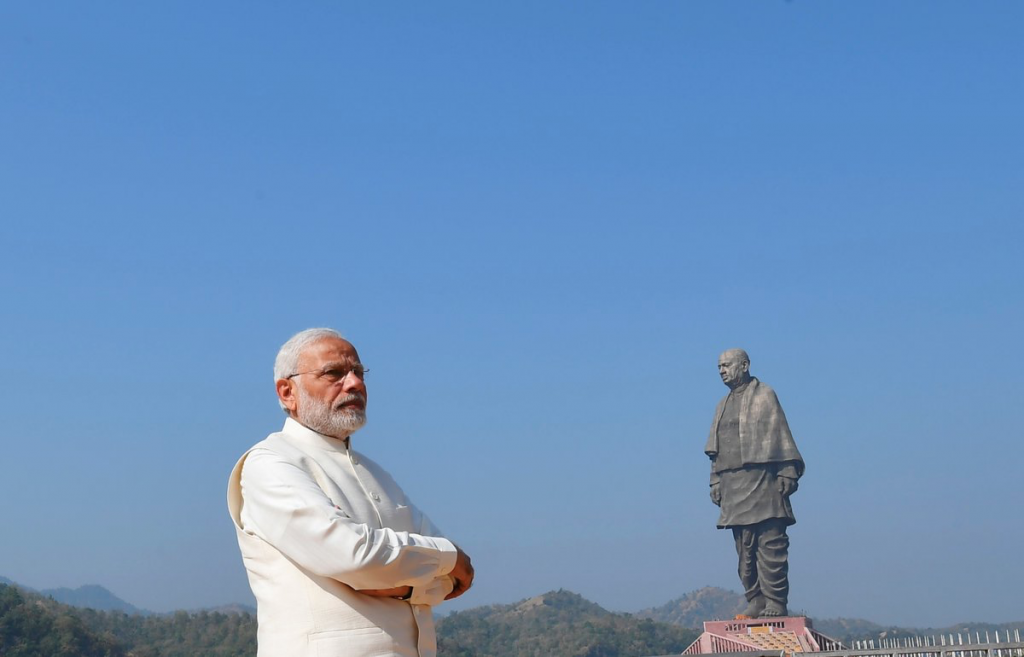 Modi’s investment in the Patel statue is part of a larger project of reshaping the pantheon of Indian nationalism. Credit: Twitter/BJP

Layers of history are being excavated in today’s political rhetoric and equally, several are being obscured. In the dominant narrative, the integration of the recalcitrant princely states – Jammu and Kashmir, Hyderabad and Junagadh – into the Indian Union is a story of subtle statesmanship and military coercion in which Patel plays a stellar role.

In a more authentic version currently being rediscovered, the integration of Jammu and Kashmir was preceded by a bloodbath unleashed by the Dogra maharaja against his subjects in the border regions of Poonch. The military action in Hyderabad was followed by perhaps a more heinous massacre. These retrievals of history sit alongside similar stories now being recorded from other princely states such as Alwar and Bharatpur.

Junagadh’s accession, which Modi was gesturing towards as he spoke of Shiv bhakts requiring a visa to visit Somnath, did not on best available reckoning, involve similar atrocities. But as with all such matters involving the quest for moral clarity, it is useful to look towards Mahatma Gandhi.

Addressing a prayer meeting on November 27, 1947, when the fate of Jammu and Kashmir hung in the balance, Gandhi spoke out against the Dogra maharaja and his prime minister. He was worried about the spiral of violence, but encouraged by the visit paid by Sheikh Mohammad Abdullah to Jammu.

“There had been considerable excesses by the Hindus there,” he said. “I don’t know if what happened in Jammu was at the instance of the Maharaja or his new Premier. But these things happened and it is a matter of great shame for us. Still Sheikh Abdullah did not lose his balance and the Hindus in Jammu fully supported him.”

Ayodhya though, is not a matter of law, where legislation could in specific situations supersede judicial determination.

At the same prayer meeting, Gandhi recorded his sense of relief that the integration of Junagadh after a brief siege by the Indian army had proceeded smoothly. The visit paid to the state by Patel was the testimony he sought, since Gandhi had heard that “even the Muslims had welcomed him there”. Violence had been used, though only “after great thought and consideration”.

It was three weeks since the army had secured Junagadh’s accession, but Gandhi was alive to potential signs of trouble. Using the broader geographical term for the peninsula where Junagadh is located, he warned: “I have received a telegram from a Muslim at the right moment. Kathiawar is a region where the Muslims used to live in peace and nobody ever disturbed them… Now, in that same Kathiawar such a situation has developed that they wonder if they can live there at all… for me, this is unbearable because I was born in Kathiawar, and I know all the Princes and thousands of people there”.

It was in this rather unsettled mood of estrangement, if not overt violence, that Patel visited Junagadh in the company of N.V. Gadgil, then Union minister for public works. In a later memoir, Gadgil recorded how the decision on reconstructing the Somnath temple was made: “One morning, while walking on the beach, the idea of the restoration occurred to me and I mentioned it to Vallabhbhai. He approved it and with his consent I made an announcement of the intention to restore the ancient glory that Somnath once was”.

Sardar Patel had died by the time the reconstruction was completed, but in one of the first instances of conflict between independent India’s heads of state and government, Nehru firmly set his face against any manner of official patronage of the inaugural. As Gadgil put it: “Nehru expressed the opinion that the President should not attend the ceremony”. President Rajendra Prasad nonetheless went, ostensibly in his “personal capacity” and delivered an anodyne speech celebrating the richness of India’s cultural heritage.

Nehru’s tussle with the president has been read as an early assertion of his belief that religion would not in any manner determine state policy. It could also plausibly be argued, that he saw the reconstruction of the temple as an act of triumphalism that would do very little to soothe inflamed sentiments after the turmoil of partition and the integration of recalcitrant states. 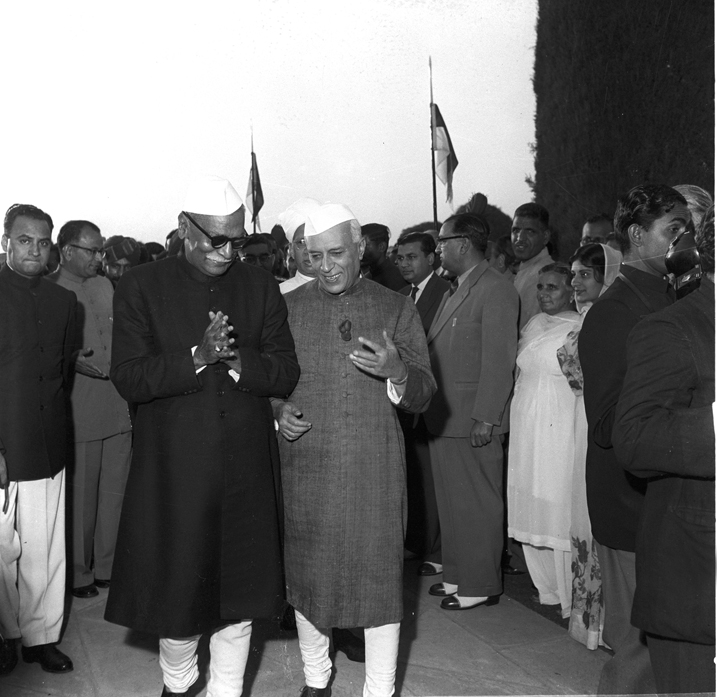 Nehru’s tussle with the president has been read as an early assertion of his belief that religion would not in any manner determine state policy. Rajendra Prasad and Jawaharlal Nehru in 1958. Credit: Photo Division, GOI

At a time when calls for the government to actively sponsor another temple building project, this time at Ayodhya, have begun to resonate on the campaign trail, the Somnath chapter will be rehashed in several variants, almost all inaccurate. If Somnath was a gesture of triumphalism, the proposed project at Ayodhya would be an affront to the rule of law.

Ruling party functionaries have made little secret of their annoyance at the Supreme Court’s failure to accede to a schedule of hearings on Ayodhya that would suit their political convenience. Inflamed sentiments over the denial of a temple, or triumphalism over the pathway to its construction being cleared of impediments, would be just the tonic the BJP needs when its performance in office over five years has been indifferent at best, damaging to vast numbers at worst.

Ayodhya though, is not a matter of law, where legislation could in specific situations supersede judicial determination. It is in essence, a question of fact – of title deed – which the Supreme Court is now called on to decide after it set aside a highly questionable ruling by the Allahabad high court.

To introduce legislation that trumps the judicial process would be to create facts through majoritarian will. It would legitimise both the vandalism of December 6, 1992 and the trespass of 1949 by which idols of Ram Lalla were introduced into the Babri Masjid.

And its worst potential consequence could be a country where a civil dialogue on the basis of a shared universe of facts would be impossible, since every segment of this vast and complex nation could potentially create facts according to its will.