Shopkeepers, Traders in Srinagar Allege Police Forced Them to Stay Open on August 5

There were also allegations that the police broke open locked shops on Thursday. 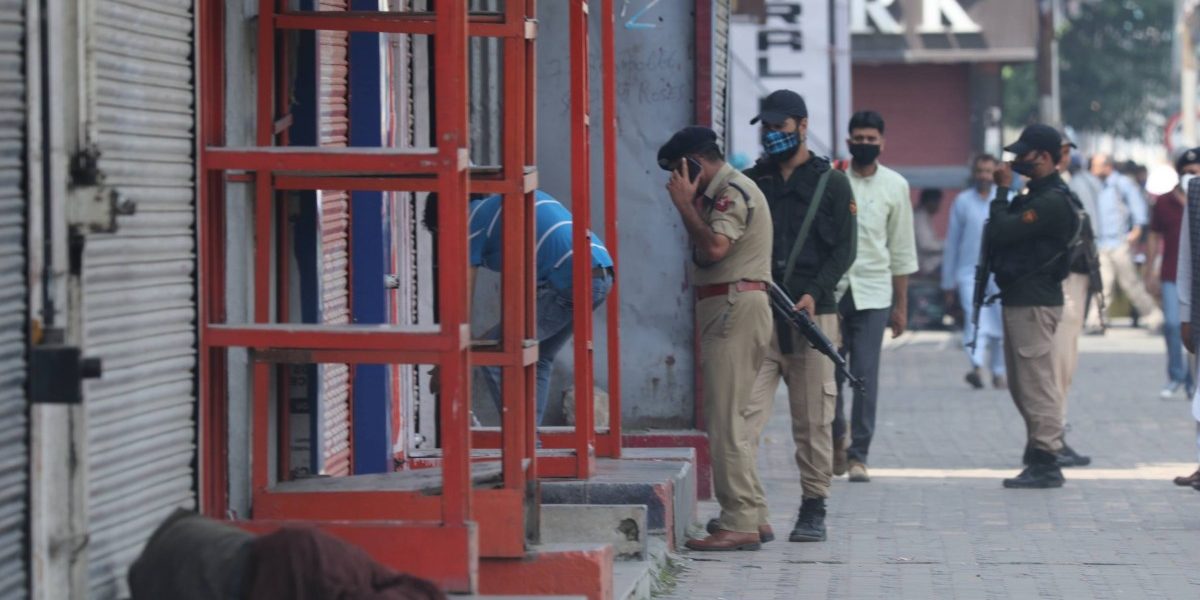 Srinagar: Ahead of the second anniversary of Article 370 being read down, the Jammu and Kashmir administration directed shopkeepers and traders to “keep businesses open like any other day or face consequences”.

Bashir Ahmad, general secretary of the Kashmir Traders and Manufacturers Federation, told The Wire that the police in Srinagar told shopkeepers not to close their shops or hold any kind of protest on August 5.

“This is psychological warfare against people. They are doing it so that people don’t protest on August 5,” he said.

On August 5, 2019, Articles 370 and 35(A) were read down. These articles gave the erstwhile state of Jammu and Kashmir special status under the constitution, including the mandate to define its own domicile rules.

Political parties in Jammu and Kashmir have vowed to continue their struggle for restoration of statehood and special status, while the BJP-led government still calls the move a “historic decision”.

On the morning of August 5, police were seen walking around Srinagar’s roads around and talking to shopkeepers in Lal Chowk. Kashmiri photojournalists said they weren’t allowed to take photos in the area.

#Kashmir: As police is using iron rods to break in shutters in Srinagar markets—we are being stopped from doing our job.

Markets are mostly shut in Srinagar to observe second anniversary of abrogation of Article 370. pic.twitter.com/00s4n1DKzD

One photojournalist confirmed this development to The Wire. “We were told to leave and not click any pictures,” he said, on the condition of anonymity.

Meanwhile, Ahmad added that the order has spread panic among many shopkeepers, who fear they may be arrested if they do not comply. Eyewitnesses told The Wire that police personnel were allegedly breaking locks of shops in Srinagar and forcing traders to keep the market open.

J&K police use iron rods to break open the locks of shops which are observing a shutdown to mark the second anniversary of abrogation of article 370 in the region. pic.twitter.com/H1sn4imk7o

The Wire approached several shopkeepers asking them what happened, but nobody was willing to speak on the record as they feared backlash from the police.

One of the shopkeepers anonymously said that he heard from others that businesses had to remain open today, otherwise “FIRs will be filed against those who won’t follow the order”.

Also read: The Modi Government’s ‘New Era’ for J&K is Nothing to Celebrate

Meanwhile, a few shops in Srinagar were sealed by the authorities on Wednesday.

Farhan Kitab, president of the Kashmir Retailers Association, said it was because those shopkeepers have pending municipal tax payments. He requested the authorities to give them time as the people are struggling from past three years “to revive their businesses.”

He said that the police and administration had held a meeting in Srinagar where various issues were discussed. He said that “no particular discussion on August 5 took place”, except it being suggested to them “to not follow anti-government orders”.

Manzoor Ahmad Mir, president of the Regal Lane Traders’ Association in Srinagar’s central commercial hub of Lal Chowk, confirmed to The Wire that shops were being kept open. He, however, didn’t want to talk about the meeting between the police, administration and traders. “Talking about this creates troubles later,” he said.

A tweet from the Twitter handle claiming to be of separatist leader Syed Ali Shah Geelani had ordered people to observe a shutdown call on August 5. It read, “While the entire world was struggling with the COVID-19 pandemic, the Indian government has introduced laws during these two years to convert the Muslim majority into a minority.”

It also suggested that Kashmiri Hindus, who had migrated en masse due to violence in the 1990s, should not resettle in the separate colonies the Indian government plans to build for them.

But the police claimed that this call was not from Geelani, saying, “a call for shutdown on August 5, circulated online and attributed to Syed Ali Geelani, is fake”. Geelani’s family, the police said, claimed that the call was issued by “someone from Pakistan”.

Also read: Two Years Without Article 370 Has Done Little to Benefit the People of J&K

More than 7,000 Kashmiris, including politicians, activists and minors, were arrested before and immediately after the Narendra Modi government revoked Jammu and Kashmir’s autonomy in 2019. A communication blackout was imposed for several months and tourism suffered huge losses. Since 2019, the government has altered property rights of locals, where people fear that the new laws will change the demography of India’s only Muslim-majority region.

Imran Nabi Dar, National Conference provincial spokesperson, told The Wire that the August 5 decision was a humiliation for the people of Jammu and Kashmir which should have never happened. He said there has been no development on the ground, despite the Union government’s claims.

“We have not lived a normal life for the past two years,” he said. “No new jobs have been created. Militancy related activities are going on. They talk about achievements like the tulip festival and wazwan festival, but those have been going on for years.”

The Wire attempted to contact the police to ask whether shops were being forcefully kept open, but there was no response.