Applications seeking information under the RTI Act have either been ignored or transferred to another department. 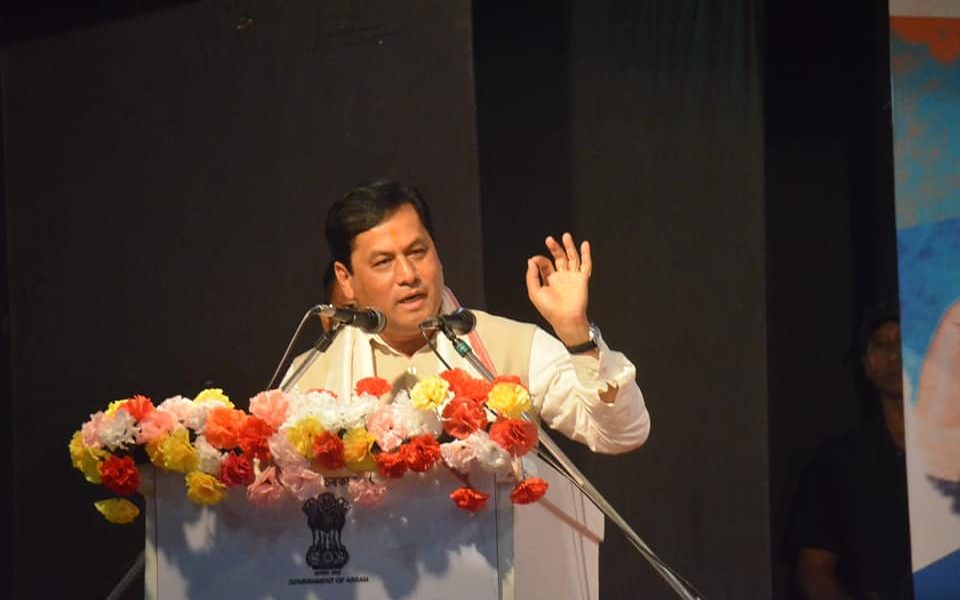 Guwahati: Efforts to obtain information on the Assam government’s plan to initiate action against three senior Indian Police Service (IPS) officers allegedly involved in rhino killings and a chit fund scam have hit a dead end. Applications seeking information under the RTI Act have either been ignored or transferred to another department.

In 2014-15, the Vigilance and Anti-Corruption Department of Assam Police had submitted two enquiry reports to the Home and Political Affairs Department of the state government which is under chief minister Sarbananda Sonowal.

While one details the involvement of an inspector general of police in the killing of rhinos at the Kaziranga National Park, the other reveals how two officers of the rank of additional director general helped promote the illicit chit fund scheme of the Kolkata-based Saradha Group of Companies which went bust in 2013.

Usually, when any department submits such reports against officials, the next step is an open enquiry which has so far not been done in these cases in Assam. The officers can be chargesheeted only if the open enquiry finds them guilty.

This correspondent had filed the first RTI application on May 17, 2017, before the Department of Home and Political Affairs which listed ten requests for information focusing primarily on the reasons behind the delay in commissioning an open enquiry and its opinion on the reports submitted by the Vigilance and Anti Corruption Department. No reply was received on this application. 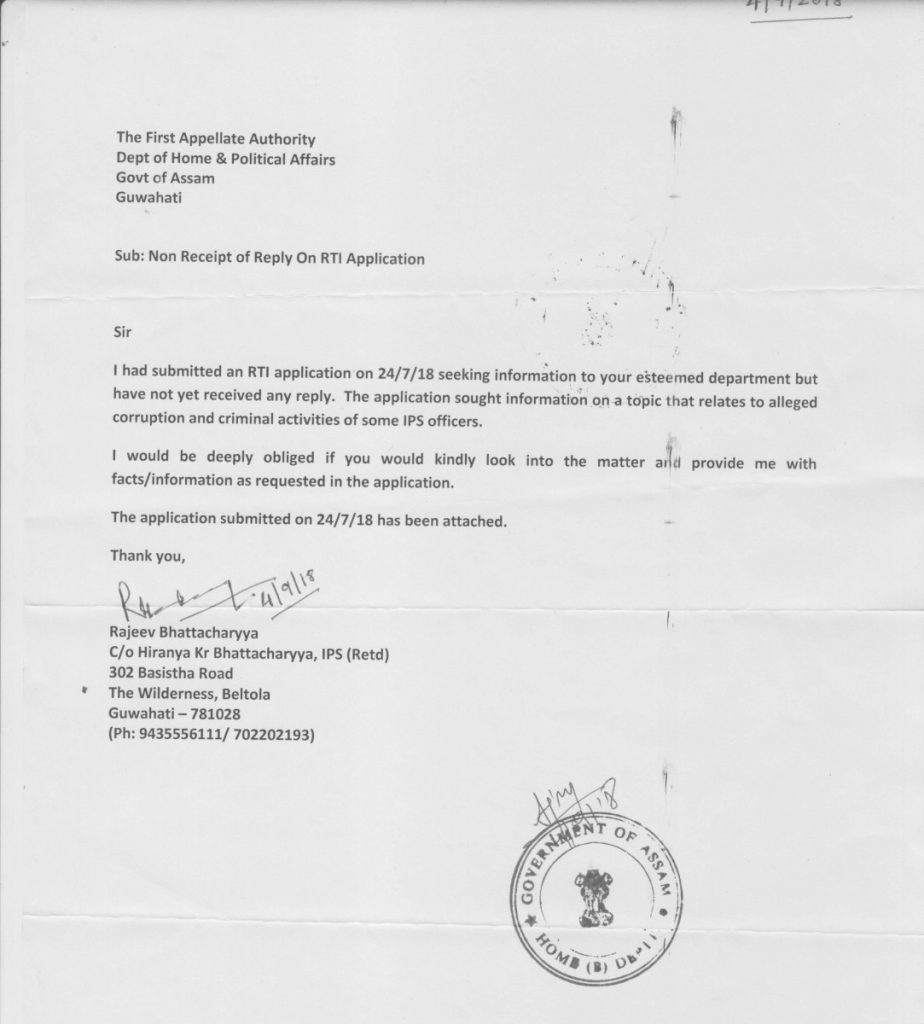 Some senior bureaucrats are of the view that the government ought to have taken the cases to a logical conclusion given the grave nature of the charges and the evidence specified in the reports. “We are extremely surprised why the government has chosen to remain silent when there was also a commitment to put an end to misgovernance by the BJP-led government,” said a secretary of a department on condition of anonymity. He referred to a “powerful lobby” that seemed to have scuttled further probe into these incidents. 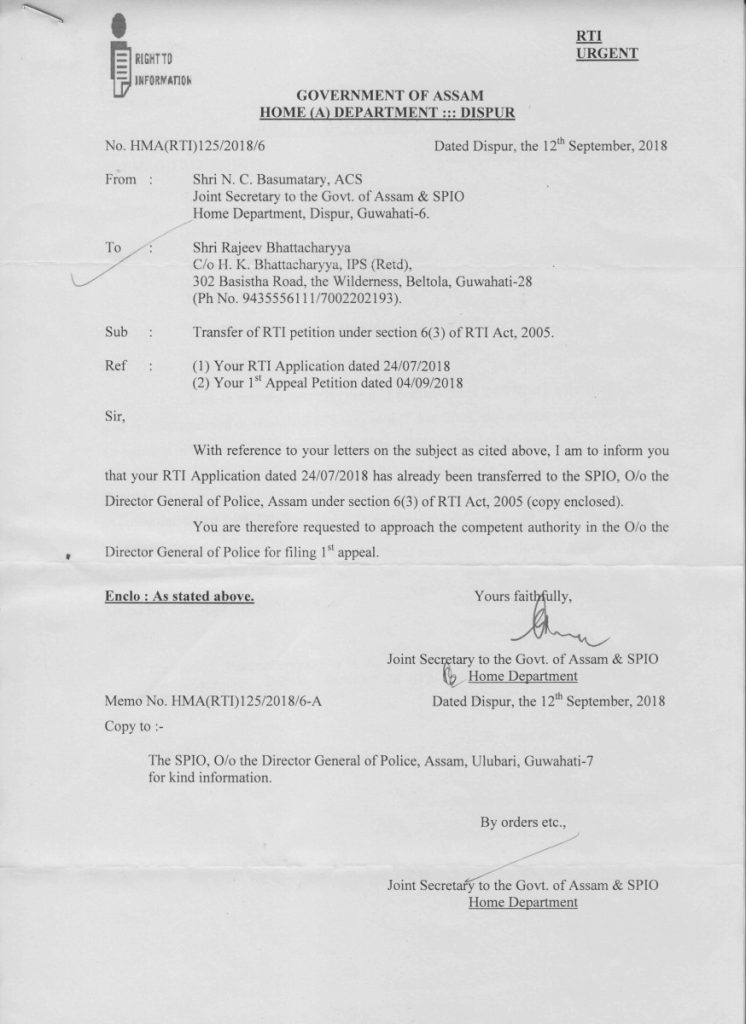 It may be mentioned that the chief minister has been repeatedly declaring that there would be no compromise on corruption. Soon after he assumed office, the CM’s Special Vigilance Cell which is headed by a superintendent of police was activated to enquire and investigate into “special and sensitive offences” committed by state government officials.

Senior police officers claim that in the episode of rhino killings, the inspector general had firmed up a deal with an overground militant leader and his bodyguards for executing the crime. “There is a suspicion that the bodyguards of the officer were also involved. It is not known how many rhinos were slaughtered but the profits from selling the horn were shared by all members of the gang. There are agents waiting to purchase the horn in Dimapur which is not far from Kaziranga,” a deputy inspector general of police claimed.

On the chit fund scheme they alleged that the two additional director generals accepted hefty amounts from Saradha Group for protection and promotion of the illegitimate business which began to proliferate in Assam from 2010. Offices were set up across the state, agents recruited for gathering investments from the lower income group sections and two daily newspapers launched in Guwahati as well for brand promotion. Chairman Sudipto Sen was often seen moving around with armed police personnel whenever he landed in Guwahati during 2010-12. In April 2013, he was arrested from Sonmarg in Jammu and Kashmir almost a week after he went missing from Kolkata.

When asked to explain the transfer of the application, joint secretary N.C. Basumatary said that the home department wanted to know the “latest status” of the case from the police. “In the home department, there is a cell called Political Vigilance Department and we had asked them to furnish the documents. We don’t have any materials now and I will ask Avdesh Kumar who is in charge of vigilance under the home department to check once again,” he said.

(The story will be updated whenever a reply is received on the RTI Application.)

Rajeev Bhattacharyya is a senior journalist in Guwahati and author of Rendezvous With Rebels: Journey to Meet India’s Most Wanted Men And Lens and The Guerrilla: Insurgency in India’s Northeast.