The Bill violates the principal clause in the Assam Accord of 1985. 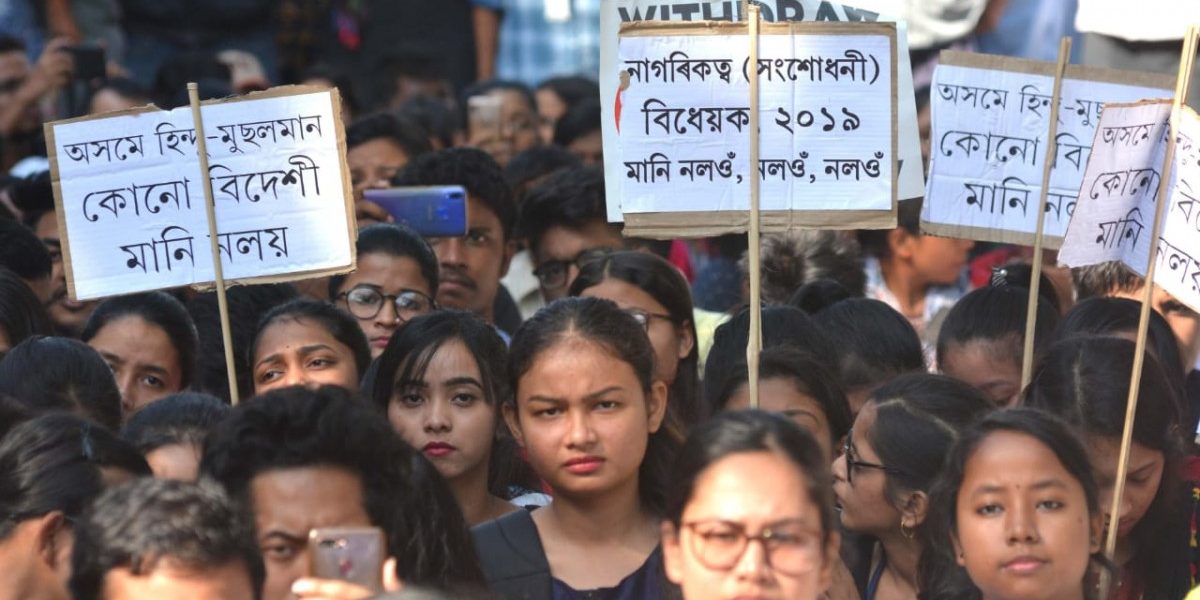 New Delhi: Assam has been witnessing massive street protests, both during the day and night. Large numbers of students, common citizens, civil society, political groups, artists, writers and editors have been on the streets since news spread that the Narendra Modi government is set to pass the Citizenship (Amendment) Bill in the ongoing session of parliament.

The Bill violates the principal clause in the Assam Accord of 1985, as per which all undocumented immigrants from Bangladesh – Hindus and Muslims – who had entered the state after March 24, 1971 would have to be detected and deported to their home country. However, the Modi government plans to grant Indian citizenship to those Hindu Bangladeshis who had entered the state illegally till December 31, 2014, aside from granting the same to five other religious groups from Pakistan and Afghanistan.

Starting today, the Northeastern state is set for two days of bandh in protest against the Centre’s decision. While the All Moran Students Union has called for a 48-hour bandh beginning 5 am, December 9, the powerful North East Students Union (NESO) has called for an 11-hour-long Northeast Bandh on December 10. The All Assam Students Union (AASU) too has announced a set of protests between December 9 and December 10, observed in the state as Swahid or Martyr Dibas in memory of those killed in the anti-foreigner agitation between 1979 and 1985.

During the last few days, aside from flashing banners against the Bill, the slogan-shouting protesters have burnt effigies of Modi, Shah, state chief minister Sarbananda Sonowal and state finance minister Himanta Biswa Sarma at various places in the Brahmaputra Valley. Demonstrators have also gheraoed the residences of various state ministers.

A week ago, Sonowal’s residence in Dibrugarh was surrounded by hundreds of members of AASU’s local unit, which is at the forefront of the statewide protests and supported by dozens of civil society and student groups. The chief minister reportedly had to ‘flee’ the scene in a helicopter. The students of Dibrugrah University, Sonowal’s alma mater, have since declared a ‘ban’ on his entry into the institution till the Centre keeps the state out of the Bill’s ambit.

The students of Gauhati University too have intensified their protest against Sonowal, who was a former president of the AASU before joining politics. It led the chief minister to skip a programme at the university on November 30. Reports have come from the state that his cavalcade was being shown black flags by protesters wherever it passed.

A large number of students from Tezpur University have took out a procession against the Bill. Students of the Guwahati-based Cotton University are also taking the lead in a series of anti-CAB protests. 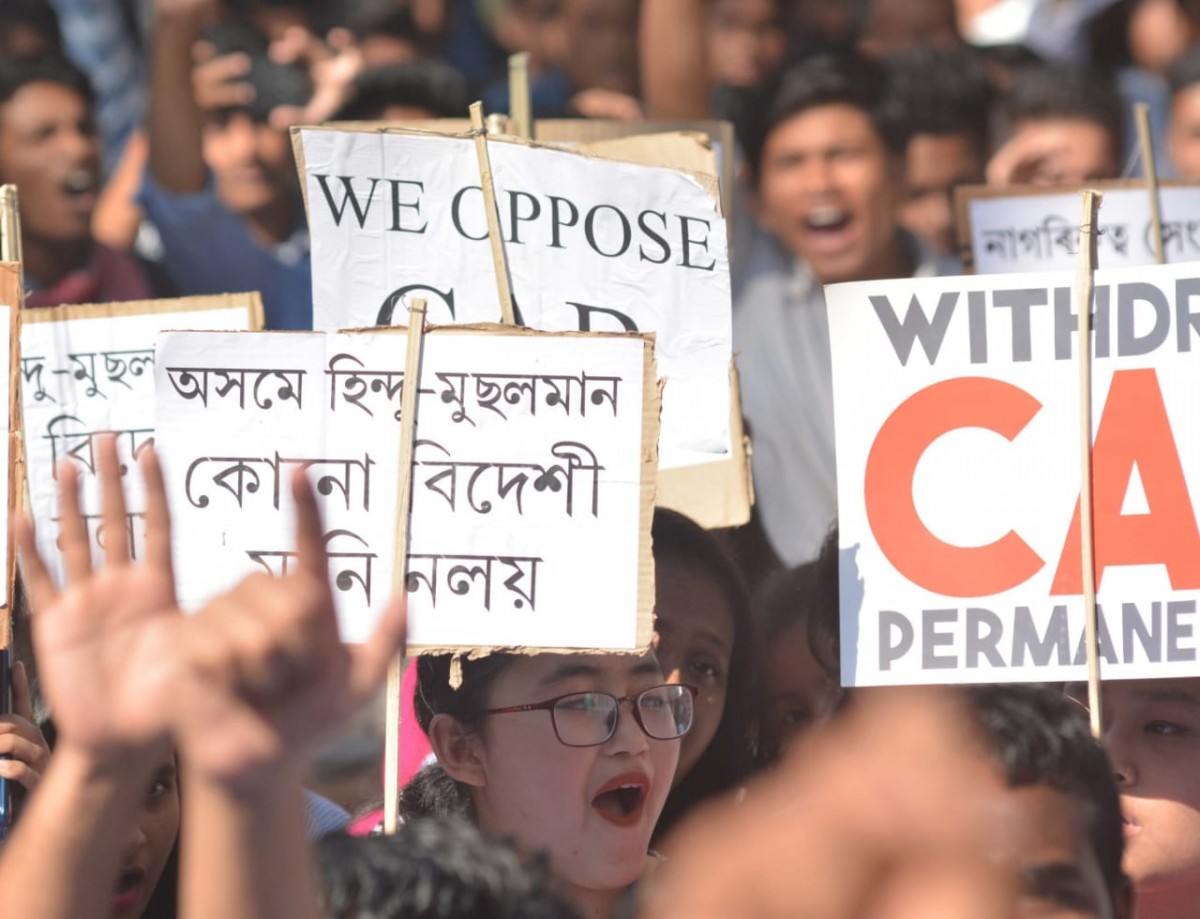 A considerable amount of the protesters’ anger has also been directed at the three ministers of the Asom Gana Parishad (AGP) in the Sonowal cabinet for supporting the Bill. Local reports said AGP minister Phani Bhushan Choudhury had to leave a party meeting abruptly on December 7 and rush to his vehicle as he was about to be surrounded by protesters. On December 8, the anti-CAB protesters reached the house of AGP president Atul Bora in Golaghat town when he was inside.

The huge public anger brimming up against the party born of the Assam Accord, which the Bill violates, has lately led Bora to announce that his party would take a stand on it at a meeting in Guwahati on December 9. Though the three BJP ministers were called by Shah to New Delhi along with other groups from the state between November 30 and December 3, they didn’t apprise AGP members about what transpired between them and the Central government. While the party, a BJP ally, doesn’t have any Lok Sabha member, it has a Rajya Sabha member.

As expected, home minister Shah is to introduce the Bill at the Lok Sabha on December 9 and hopes to get it passed at the house by banking on the brute majority that the ruling BJP enjoys at the moment. The Bill is expected to be placed in the Rajya Sabha for approval on December 10.

Also read: India’s Liberal and Democratic Voices Must Get Ready for Another Battle

Yet another section in the proposed amendment says that if any such person can’t provide any proof that his/her parents were born in India, they can still claim Indian citizenship if they have continued to stay in the country for six years. As per the present Act, anyone born till July 1, 1987 in India is an Indian citizen. However, this amendment would help include those who may not be born in India or can’t show any document to prove that he/she or parents were born in India. The only criteria for such a person would be that he/she must belong to the six religious groups and must come from Pakistan, Bangladesh and Afghanistan.

While the July 1987 section in the Act allows anyone to be an Indian citizenship only if born in India, Assam’s exclusive cut-off date set by the Assam Accord gave a general amnesty for nearly 20 years to those also born in East Pakistan. If this amendment of the Modi government includes Assam too, it will likely have to take in more such persons and on the basis of religion.

As per the draft Bill, a thin part of the state covered by the Sixth Schedule of the constitution will be excluded from it.