Assam Firing: What Happened During the Government's Eviction Drive in Darrang?

A horrific video clip of Assam police officers shooting a protester in a village during an eviction drive in the state’s Darrang district hit national headlines and caused outrage. 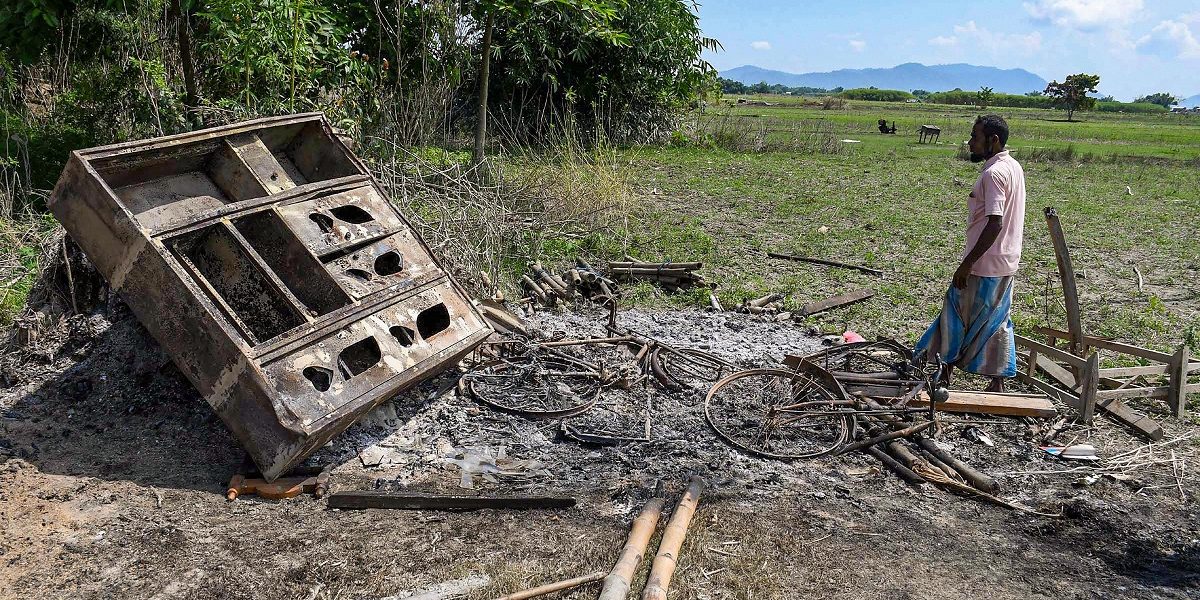 People search for their belongings after their houses were demolished and destroyed during an eviction drive in Darrang district of Assam, September 24, 2021. Photo: PTI

New Delhi: A day after a horrific video clip of Assam police officers shooting a protester in a village during an eviction drive in the state’s Darrang district hit national headlines, the All Assam Minority Students Union (AAMSU) has called for a probe into the matter by a sitting judge of the Gauhati high court under the watch of its chief justice.

Speaking to The Wire, AAMSU president Rezaul Sarkar said, “The state government has announced a judicial enquiry by a retired judge of the Gauhati high court after the video clip went viral on September 23 but we are calling for an inquiry by a sitting judge and under the direct monitoring of the chief justice of the HC. This is because a retired judge may be politically affiliated. We want an impartial probe into the killings by state police which could have been easily avoided.”

The violent incident at the village on a sandbar, Dholpur, which falls under the Sipajhar revenue circle of the district led to the killing of at least two people who were being evicted. Several policemen were also injured, according to the government.

Speaking about the eviction drive, Sarkar pointed out, “Unlike September 23, the September 20 eviction drive was peaceful because those evicted had demolished their dwellings on their own. This was because the district administration showed them the land where they could resettle. We had objected to the lack of drinking water and toilet facilities in those areas but the district administration assured us that it will be addressed.”

He said the eviction drive on September 23, which was to affect 200 households, was carried out without showing the affected persons land where they could resettle. “Late on September 22 night, when the district administration handed out eviction notices to those families, they had woken up their little children, made them sleep in the open and began dismantling their dwellings on their own. The notice had given them time only till 6 am the next day. By morning, 80% of the dwellings were dismantled. Only 50-60 houses were left standing. The residents were ready to move to a new area like it was the case for the earlier evictees.”

Sarkar said the police force arrived for the drive. “Some residents objected to it; said they won’t dismantle their houses before they were told where to go. It was for that reason AAMSU, Krishak Mukti Sangram Samiti (KMSS) and Sankyalaghu Sangram Parishad led a joint protest on the site in Dholpur village on September 23. The district commissioner, who visited the site, had a meeting with us and assured us that area for their relocation would be announced before the eviction was completed. That assurance led us to leave the site.”

He said after the activists left the site, the state police did not allow the rest of the people to dismantle their houses on their own and began running bulldozers over them. “This angered the residents as they are poor and would not be able to re-use the tin sheds and other materials needed to rebuild their dwellings at the relocated site. The affected lot began pelting stones at the policemen as they were using force on them; that eventually led to the shooting and the killings by the state. We see that intervention of the police as pre-planned as there was no provocation from the evictees because they were peacefully waiting for the district administration to allot them a relocation site,” Sarkar said. 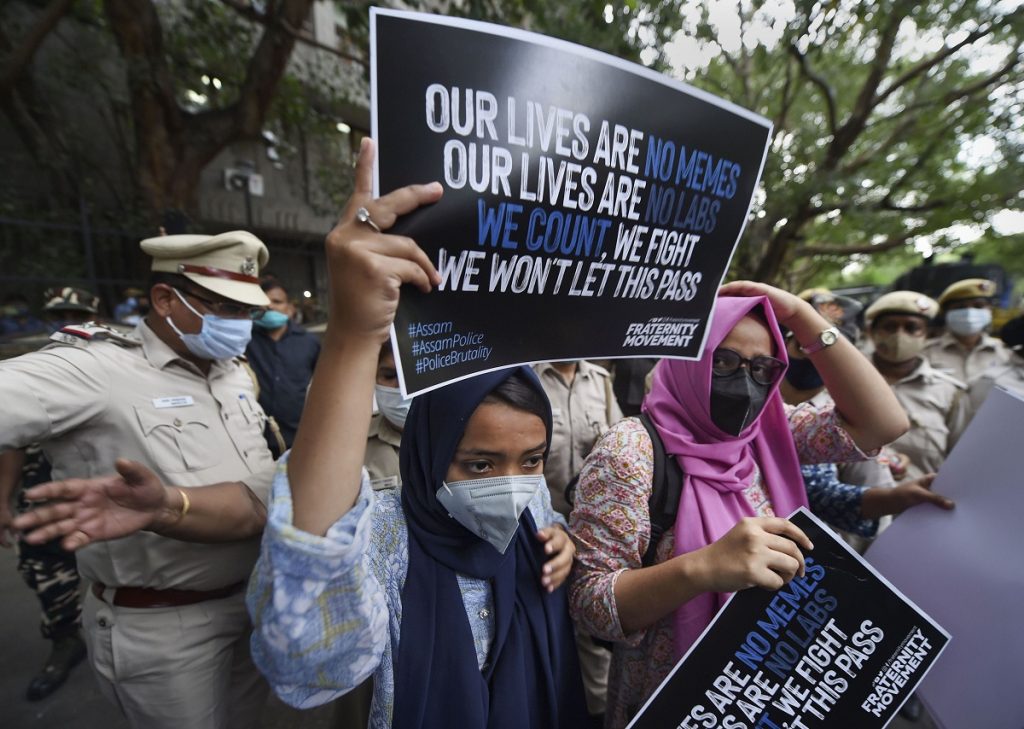 Activists hold placards during a protest after visuals of Thursday’s violence during an eviction drive in Darrang district of Assam emerged in social media, in New Delhi, September 24, 2021. Photo: PTI/Manvender Vashist

The eviction drive that began on September 20 was the second one in the area. This past June, 120 bighas of Dholpur were cleared by the district administration. Following chief minister Himanta Biswa Sarma’s announcement then that the entire Dholpur 1 and 3 areas would be cleared of ‘encroachers’ from the government land for an agricultural project, around 200 affected villagers petitioned the Gauhati high court seeking a stay order.

Advocate Santanu Borthakur, the counsel for the petitioners, told The Wire, “The first listing of the case was on August 20 at the high court. Since it was a case of occupying government land, the court didn’t pass any interim order but issued an instruction to the state government following which the government filed an affidavit stating certain things which we wanted to respond to. But we didn’t get any time to reply to the affidavit and the government carried out the eviction after handing out a 12-hour notice to the residents.” Borthakur said, “Propriety demanded that when a case is on in the court on the matter, the administration wait for the final outcome of the court.”

Soon after the video clip went viral on September 23, several people from Assam expressed horror at the sight on Twitter and Facebook. Many shared the identity of a photographer – who was seen attacking a man injured by a bullet wound – on those platforms, demanding legal action against him, ultimately leading the state police to file an FIR against the person – Bijay Shankar Bania – and arresting him by late evening.

Noted public intellectual of Assam Hiren Gohain told The Wire, “Actually such ruthless eviction of immigrant-origin settlers was launched by the first BJP-led government soon after coming to power in Assam (in 2016) but it was forced to retreat after resounding protests by many Assamese organisations and journalists. The emphasis by the state government is that the targets are Muslims. The RSS influence is now very much evident in government programmes.”

About the eviction in the Dholpur area, Gohain said, “The underlying and concealed plan is also to dispossess farmers of their rice-plots and make the land available to monopolist mercenaries who have their footing in the Centre. It has come to light that the BJP MLA Padma Hazarika and director of the (state government’s agricultural) project has also seized hundreds of bighas of land of Assamese farmers who used to raise crops in the fertile sandbanks (created by the rivers). It is the notorious combination of corporates and saffron governments who should be held to account. The government does try to use the ploy of Assamese chauvinism, but it hardly means the Assamese farmers have been the gainer.”

An anti-immigrant organisation, Prabajan Virodhi Manch (PVM), too in its press note after the first round of eviction at Dholpur on September 20, highlighted that Hazarika “beats his own drum of serving people through agricultural project Kanyaka in his constituency.”

“In reality, it is his own business enterprise; the truth being revealed in his election affidavit where he and his wife are shown as owners of over 750 bighas of land of the Kanyaka business,” the PVM press note said. Aside from his own endeavor, Hazarika, a BJP MLA from the Sootea constituency, has been elevated to the position of a cabinet minister after the Himanta Biswa Sarma government formed a committee to lead the state sponsored agricultural project Gorukhuti after evictions at Dholpur.

Though not opposed to the eviction drives, PVM, had, however, said in the press note, “The people of Sipajhar should keep a strict scrutiny over the eviction operations and agricultural project to ensure that it is actually in the interest of the local indigenous people.” 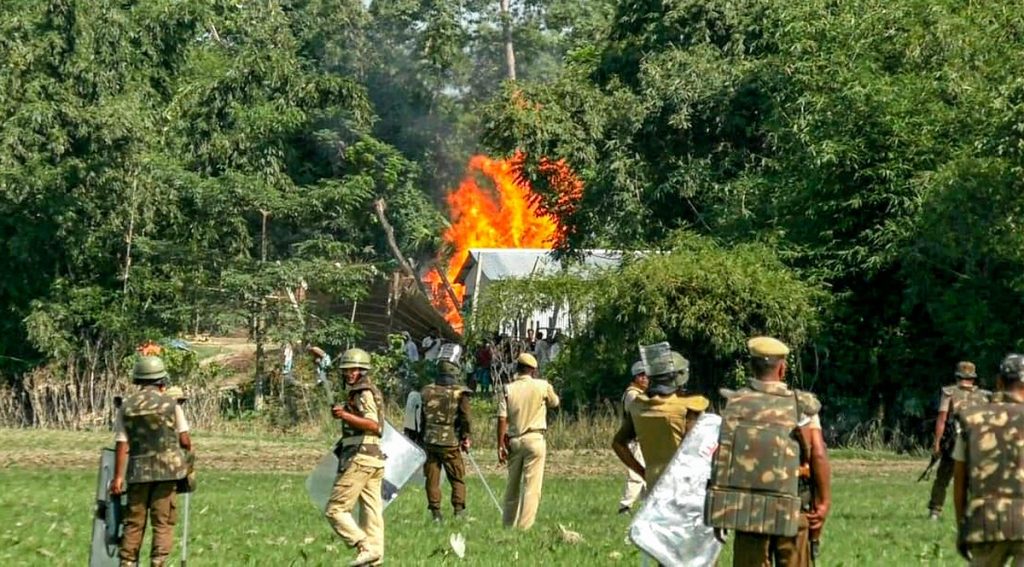 This past September 8, residents of four panchayats – Gorukhuti, Sanowa, Ganesh Kowari and Baznapathar – made a representation to the district administration stating that encroachment of 77,420 bighas of government land in the Dholpur area should be cleared and the land should be handed over to them to resume agricultural and livestock activities. They should be included in the government’s agricultural project, the residents said.

Speaking to The Wire, Upamanyu Hazarika, the founder of PVM, said, “I visited the area in the first week of September and a smarakpatra (representation) was given to the administration by the local residents after my visit. The local people wanted to do it. I also held a press conference in Guwahati on the matter after the visit following which the government carried out the eviction.”

Asked about the blatant communal angle to these evictions, Hazarika was defensive, “We can’t see the Assam sub-nationalist issue from the prism of religious communities like in rest of India but from that of ethnic communities. It is true of the entire Northeast. That is the reason Assamese Muslims are with us.” He said, “The fight against encroachment in Sipajhar was led by the villagers of Sanowa who are entirely indigenous Muslims.”

A senior Supreme Court lawyer, Upamanyu Hazarika said, “A petition seeking eviction, in which I appeared before the Mangaldoi (lower) court, was filed by (an Assamese Muslim) Kobad Ali, the president of the Grazier Association. So to see the issue only from the Hindu-Muslim dimension is not a correct portrayal. It may be the endeavour of the chief minister as it would enable him to ingratiate himself into the BJP but it is at variance with Assamese identity facts.”

He said, “The Muslims of East Bengal origin, for us, is not a religious community but an ethnic community.”

A votary of “constitutional safeguards to Assamese people” as per Clause Six of the Assam Accord, Upamanyu Hazarika reiterated, “It is time the government also implements the recommendations of the high powered committee set up by the Ministry of Home Affairs on Clause six.”