D Voter, De-Nesting and Despair: The ‘D Company’ of Assam

On the chars, the river islands of the Brahmaputra in Assam, a snapshot of what life in 'new India' looks like.

Guwahati: Memisa Nishan was declared a foreigner under the Foreigners’ Tribunal process in Assam – now enmeshed with the National Register of Citizens – and has been incarcerated at a detention centre in Kokrajhar in Assam for the last ten years or so. She has a family.

Correction: she had a family.

Her three kids –  two sons and a daughter – now live with her aged parents. Her husband passed away two months ago. His cause of death being myocardial infarction or heart attack in common language. I was told that the stress of not being able to arrange a release for his wife led to his death. He had stopped interacting with people before he died. If noises can make you go mad, silence can kill even more viciously.

Memisa’s youngest son was two years old when she was jailed. He is now 12 and has seen his mother only twice in all these years. He has forgotten the face of his mother and tells us that he cannot recognise her now. The brutality of a child not recognising his mother is a little difficult to understand. Across the animal kingdom, nature has kept the mother-child relationship as simple as possible. It can be anything but complicated. But not in Assam, where a child can forget the face of his detained mother. I suppose the power of the state is more than the power of nature. 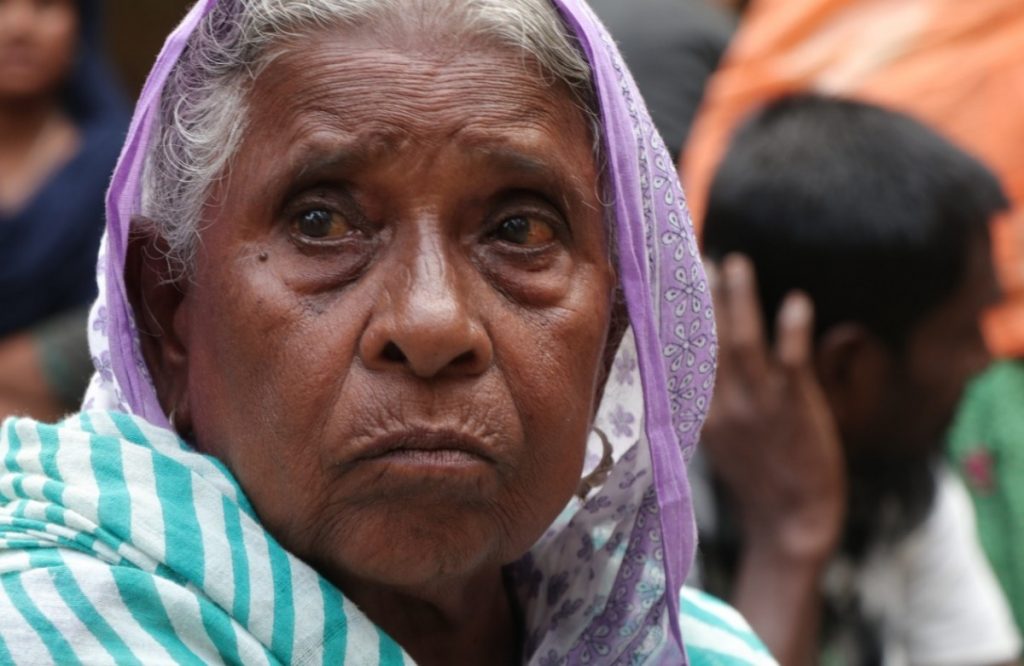 An elderly woman who lives on a char. Photo: Ajmal Jami

Memisa’s son is looked after by his elder sister, who is around 20 and works as a maid to support the family. She once went to school but dropped out after her mother was jailed. The other son is 16 and works as a mason in Meghalaya. He visits the family infrequently. The three kids and Memisa’s parents cannot afford to visit her at Kokrajhar, as the sum of Rs 75 per person for the bus ride is too steep for the family.

If that wasn’t enough misery, Memisa Nishan, we are told, has lost her eyesight in detention. The children allege that their mother lost her eyesight because of excessive crying. Memisa has yet not been informed of her husband’s death. Some tears still await to wash off her remaining vision.

The white sand beaches are not always a bright and happy topography. The “chars” or the river islands of the Brahmaputra in Assam are expelled by the mighty river from its deep blue heart as easily as they are engulfed back when the river erodes and cuts through its tracks as it majestically flows across the heart of the state. The life on chars is thus momentary, dependent on the mercy of the Brahmaputra.

A woman and a girl walk across a char. Photo: Ajmal Jami

We are told that there are 2,251 chars in total, supporting a population of more than three million people. These are the most deprived regions of the world, with literacy figures of around 15% or less. The female literacy in some of the chars is less than 5%, the lowest in any part of the planet. But still, people survive. They survive despite no healthcare, schools, roads, permanent houses, safe water, regular food supply! They survive despite the country looking away. Emily Dickinson had once written that to live is so startling that it leaves little time for anything else. Nothing could be truer than these words for the wretched of the chars. 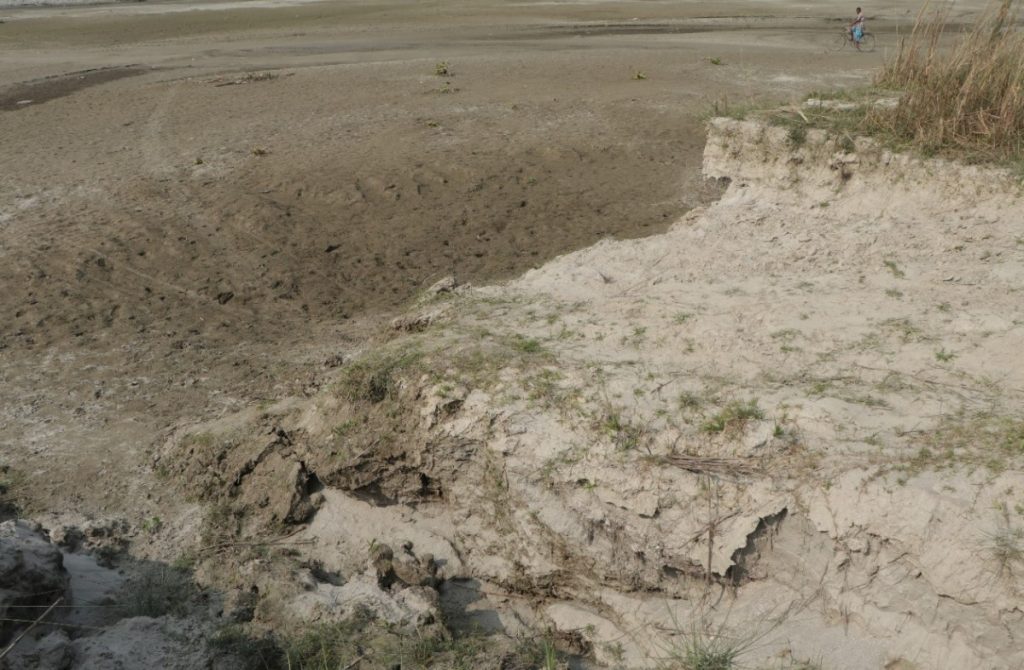 The sand erodes just as quickly as it arrives. Photo: Ajmal Jami

On the Panpara char, I met a lady in her nineties. She should remain unnamed because the state has declared her a fugitive. She was a fugitive who could barely walk. Her old body wriggled with every step. I suspect she had a movement disorder, probably Parkinson’s disease, of which the world has become more aware through celebrities like Muhammed Ali and Michael J. Fox. Her unsteady self was very much like the unsteady life which had unrolled in front of her. She said that she had voted in the very first elections in 1957. She had documents supporting the same. She too was a victim of the process of getting enrolled in the NRC. A leg injury prevented her from attending the Foreigners’ Tribunal a few years back and she was declared to be a foreigner without any further enquiry. The magistrate at the tribunal was told of her injury. He allegedly said that even if someone has died, the dead body has to be presented to prove their nationality! When it comes to the NRC in Assam, the dead are more trustworthy than the living.

The unnamed lady, like Memisa Nishan, was first declared a D-voter, a common action preceding the final act of detention by the Foreigners’ Tribunal. The arbitrariness of the process of being declared a D-voter is phenomenal. The onus of proving citizenship in the NRC solely rests with the people. The basic route to prove citizenship involves two main processes: drawing out an extensive family tree through an elaborate set of documents and to prove your legacy to that family tree through a different set of even more complex innumerable documents. 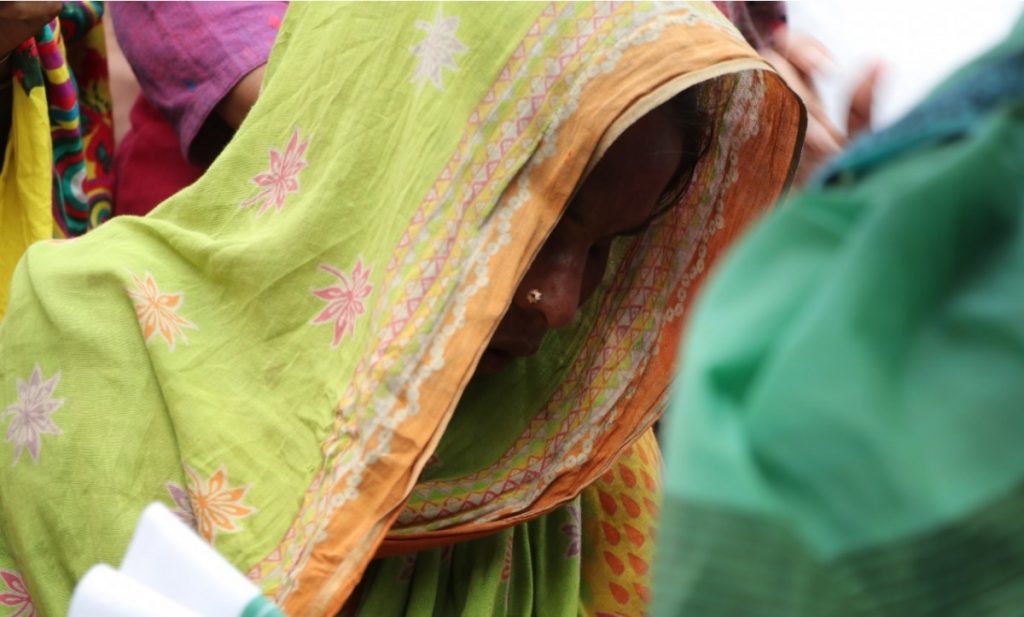 A woman who lives on a chor. Photo: Ajmal Jami

People on the char are thus obsessed with collecting documents which fulfil both the processes. In fact, the obsession with such documents even surpasses the obsession with life. As the Brahmaputra floods through a village or engulfs a char, people are more interested in saving their documents than their lives. No wonder, suicides on the char happen when people are not able to collect enough documents to prove their ‘Indianness’ to the authorities.

In the Dumargiri Part 2 char I met Bobby Deol (yes, precisely the name), a seven-year-old whose father killed himself on July 6 after realising that his name might not appear in the NRC list. Bobby Deol’s 13-year-old brother had to be sent to Delhi to work as a ragpicker. After all, someone had to take a ‘job’ to support the family. The lives of Bobby, his mother and two more siblings now hang by a thread. The process of enrolling in the NRC is hence one of extreme difficulty, bringing in despair, de-nesting homes and tearing families apart.

As we ascend on the search for ‘new’ India, more and more people will meet the fate of Memisa Nishan and the unnamed lady. More people will hang themselves like Bobby Deol’s father. More miseries will fill the chars. More children will leave their nests prematurely to earn a living for their starving families. The Brahmaputra will keep eroding its banks. It will keep filling sands into the homes of the char dwellers. That is nature and we have to respect its wrath.

But what about the sand in our tender hearts? Why do we, the lawful citizens of this land, have to look away from the despairs of fellow men, women and children? How does that make us a strong republic? How does that define our idea of India? I wonder.

Special thanks to Harsh Mander and the Karwan-e-Mohabbat Team.

Shah Alam Khan is a professor in the Department of Orthopaedics, AIIMS, New Delhi.