While local news reports say 800 people were evicted, villagers place the count of affected people at around 20,000. 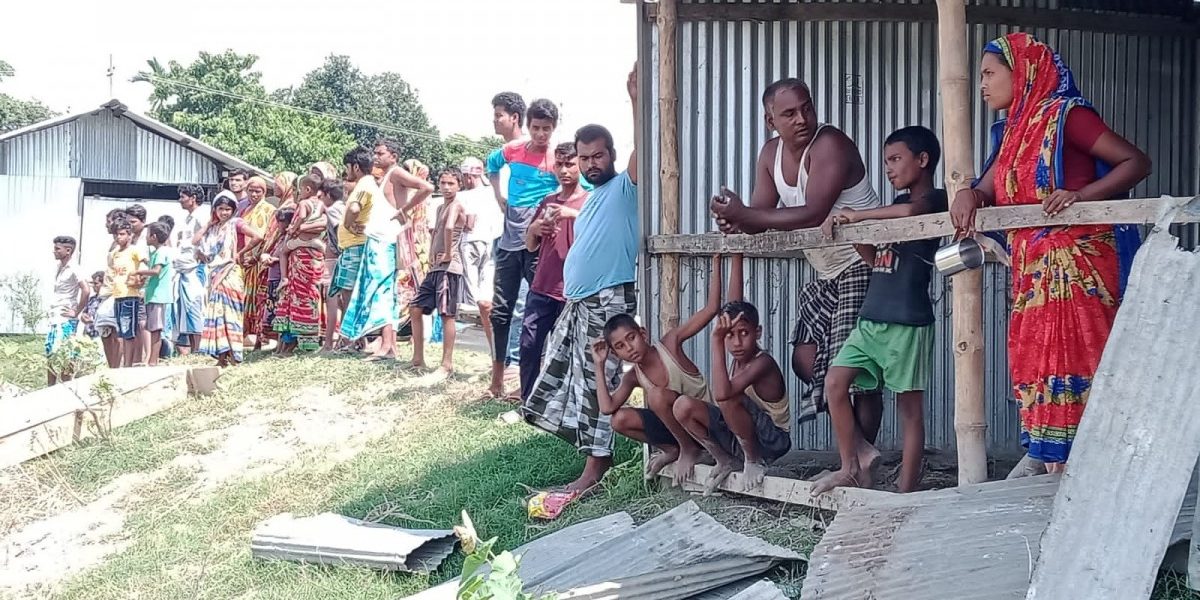 Hundreds of residents of Assam's Dhalpur village were left without homes after the state government's eviction drive on September 20. Photo: Debananda Medak

New Delhi: The Assam government carried out a massive eviction drive in a village on a sandbar in the Darrang district on Monday, September 20, leaving at least 800 families homeless.

This was the second round of evictions carried out in the last three months at the village – Dhalpur – which is populated mostly by Muslims of East Bengal origin.

A fact-finding committee had visited the village soon after the district administration carried out the first eviction drive in June. The committee had stated that 49 Muslim families and one Hindu family had been uprooted in the drive, which local newspapers said had “cleared” 120 bighas of land (1 bigha is around 900 square yards), purportedly belonging to “pre-historic” Shiva temple.

The September 20 drive, however, was a much larger exercise. 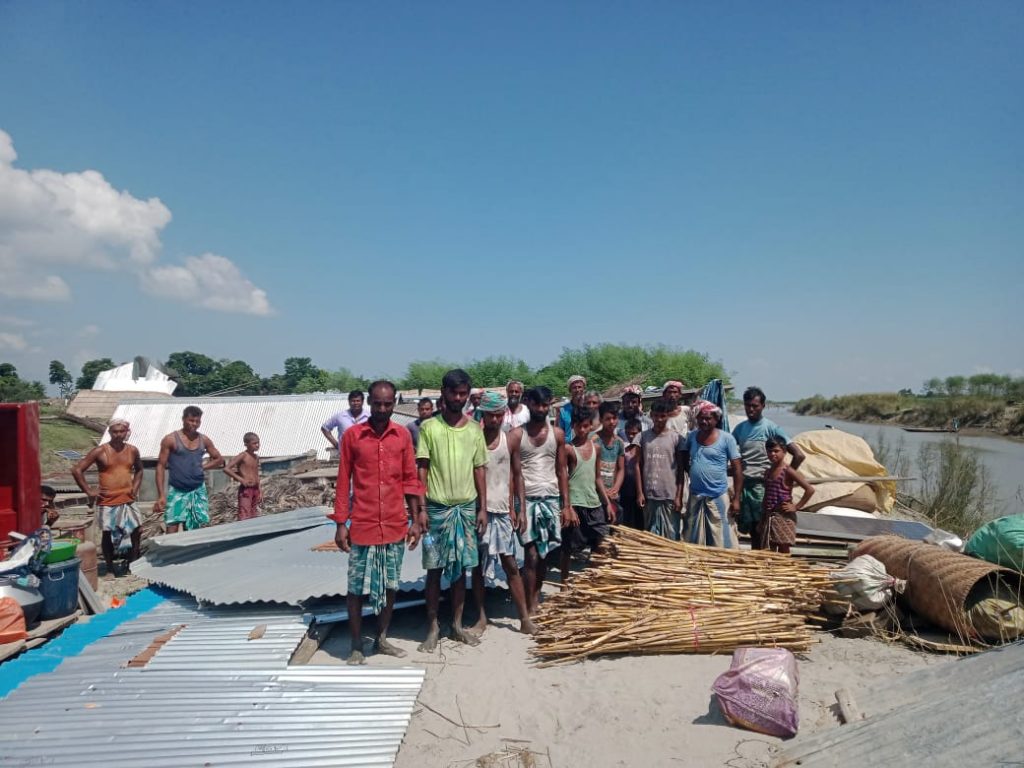 This was the second round of evictions carried out in the last three months at the village of Dhalpur. Photo: Debananda Medak

The news reports said the district administration cleared “8000 bighas” of land which led to the eviction of 800 people.

Some residents of Dhalpur told The Wire that the number of evicted families was more than 900, which would take the count of affected people to at least 20,000.

Photos and video clips surfaced on social media showing evicted families taking shelter under makeshift sheds to protect themselves from a heavy bout of rain after their dwellings were demolished. The drive was carried out while the state government still has multiple pandemic-related restrictions in place. 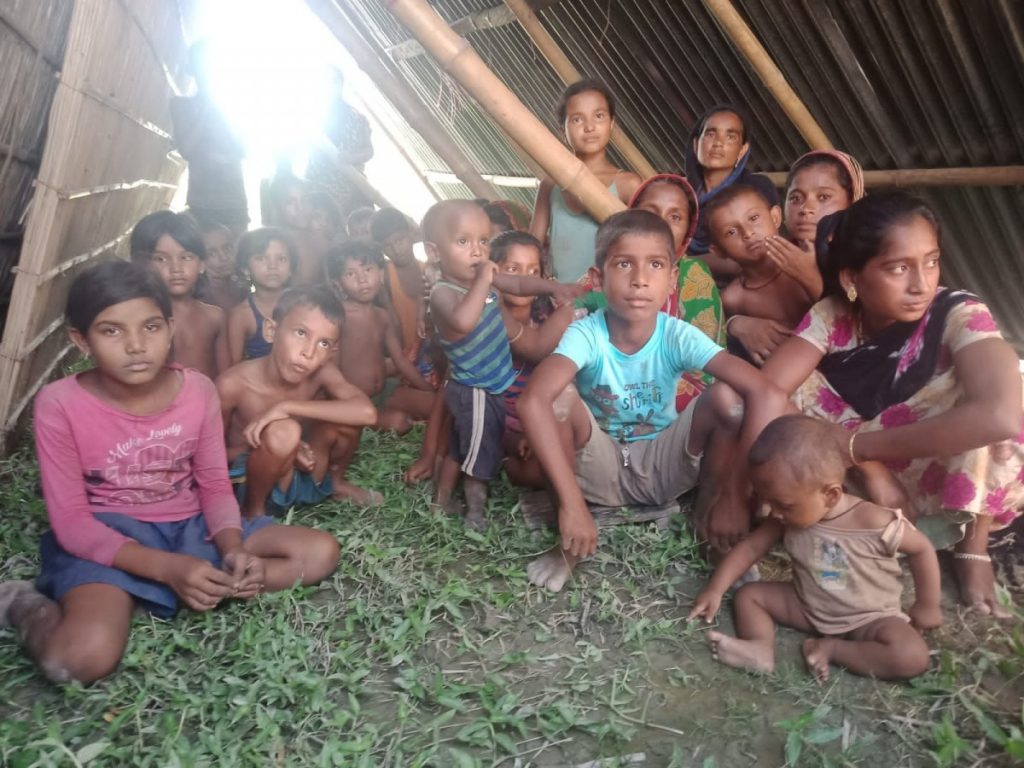 Some residents of Dhalpur told The Wire that the number of evicted families was more than 900. Photo: Debananda Medak

According to the villagers, the local administration engaged more than 1,200 police personnel and jawans from the Assam Police’s 14th battalion to carry out the drive at Dhalpur No. 1 and No. 3. 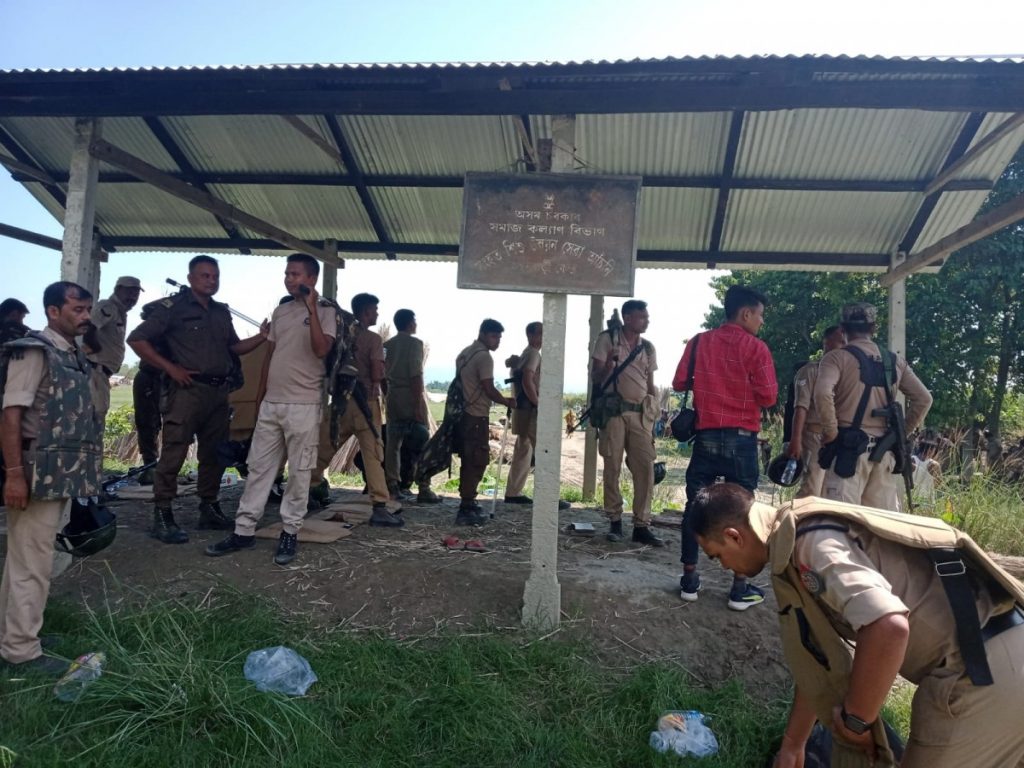 “The drive was carried out by the Darrang administration and led by the chairman of the proposed Gorukhuti multi-purpose agricultural project. At the same time, the district administration used 22 tractors to plough the cleared, cultivable land right after the eviction,” said a villager. 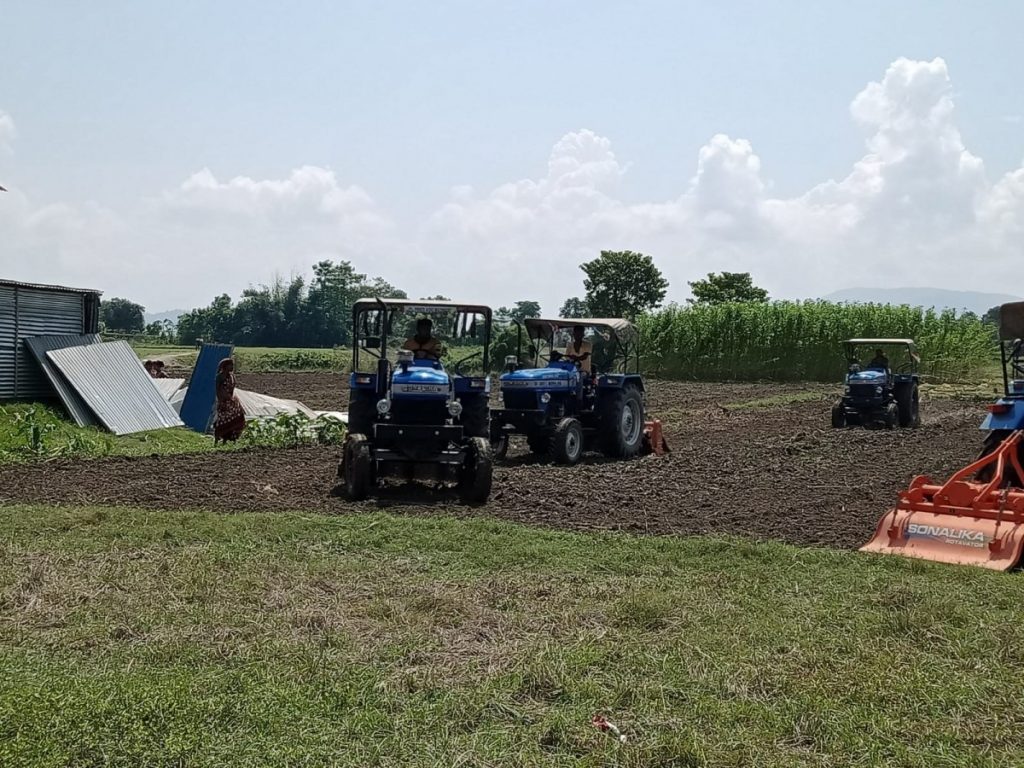 In the second week of June, soon after the first drive, Sarma’s cabinet approved the formation of a committee with Padma Hazarika as the chairman. Photo: Debananda Medak.

The chairman of the agricultural project is Padma Hazarika, BJP MLA from Sootea. The project was announced by chief minister Himanta Biswa Sarma after he visited Dhalpur, a day after the first eviction drive had been carried out by the district administration on June 7.

Today I visited Gorukhuti in Sipajhar, Darrang with Industry Minister @cmpatowary, MLA @paramarajbongsi and former MLA @gurujyoti_das and traveled in a country boat to inspect the riverine areas that were encroached by illegal settlers near Dholpur Shiva Mandir. 1/3 pic.twitter.com/ICaA7saX3o

Incidentally, among other officials, Sarma’s brother, Sushanta Biswa Sarma, was also involved in both the eviction drives as the district superintendent of police. Sushanta was deployed at the post soon after Himanta Biswa Sarma took control of the home ministry.

In the second week of June, soon after the first drive, Sarma’s cabinet approved the formation of a committee with Hazarika as the chairman. The purpose of this committee was to “utilise 77,000 bighas of government land, freed from encroachers at Gorukhuti, Sipajhar in Darrang, for agricultural purposes,” which triggered the September 20 eviction drive.

Hazarika, entrusted with the project, has also been elevated to the rank of a cabinet minister. The committee also includes BJP MP and the party’s national general secretary Dilip Saikia and party MLAs Mrinal Saikia and Padmananda Rajbongshi. The Sarma government has also sanctioned Rs 9.60 crore for the project. 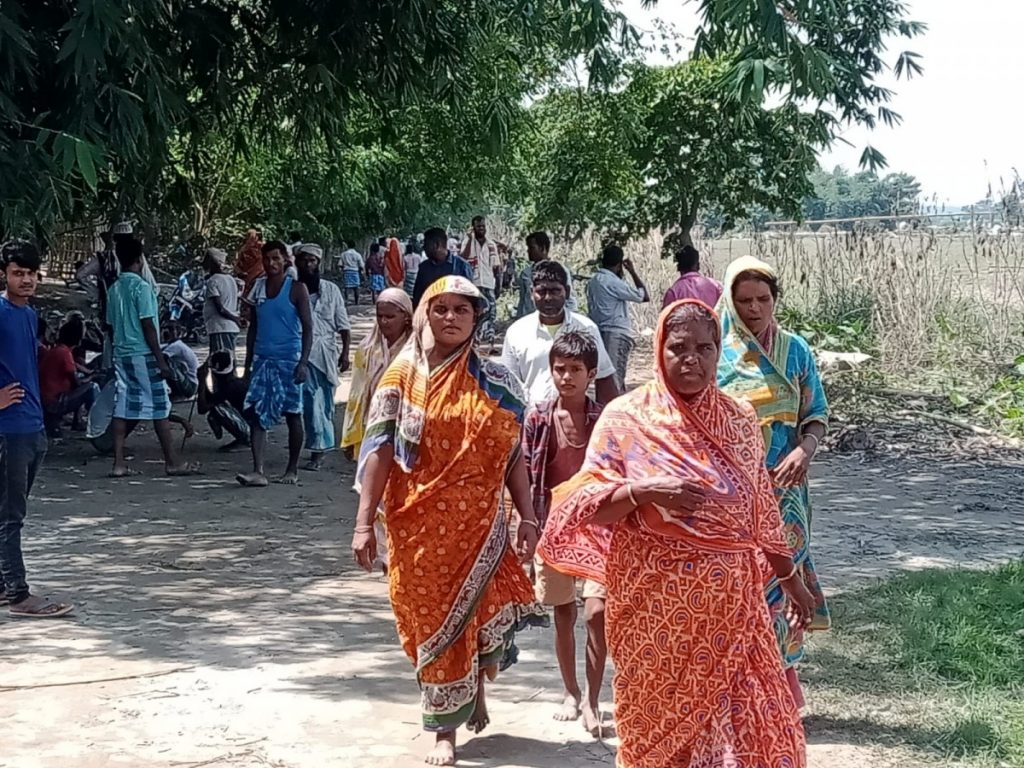 ‘The villagers had settled in that part of land back in [the] early 1980s’. Photo: Debananda Medak.

As per local news reports, “Project Gorukhuti” has the backing of the Darrang unit of the All Assam Students Union (AASU). In a meeting held with local AASU leaders in August, Hazarika had said, “During the historic Assam Movement, it was our dream to make our State self-sufficient in all aspects and to involve our youth force in agriculture. But during the regime of the Asom Gana Parishad (AGP) government two times, such projects were never taken up.“

“Of late, chief minister Dr. Himanta Biswa Sarma has taken up this novel project, initially as a pilot project, which will cover every district of the State in due course. The land belonging to the indigenous people has been encroached upon on a large-scale with a well-designed conspiracy by a group of well-organised encroachers who have always been posing as a threat to the identity and existence of the indigenous people. It is high time that our youth should come forward to join this project and to make it a total success,” Hazirka had continued.

The fact-finding committee, which had visited the affected village in June, observed in its report that, “The villagers had settled in that part of land back in [the] early 1980s…They must have shifted to this place during [the violence] in the [course of the] Assam Agitation in 1983.” 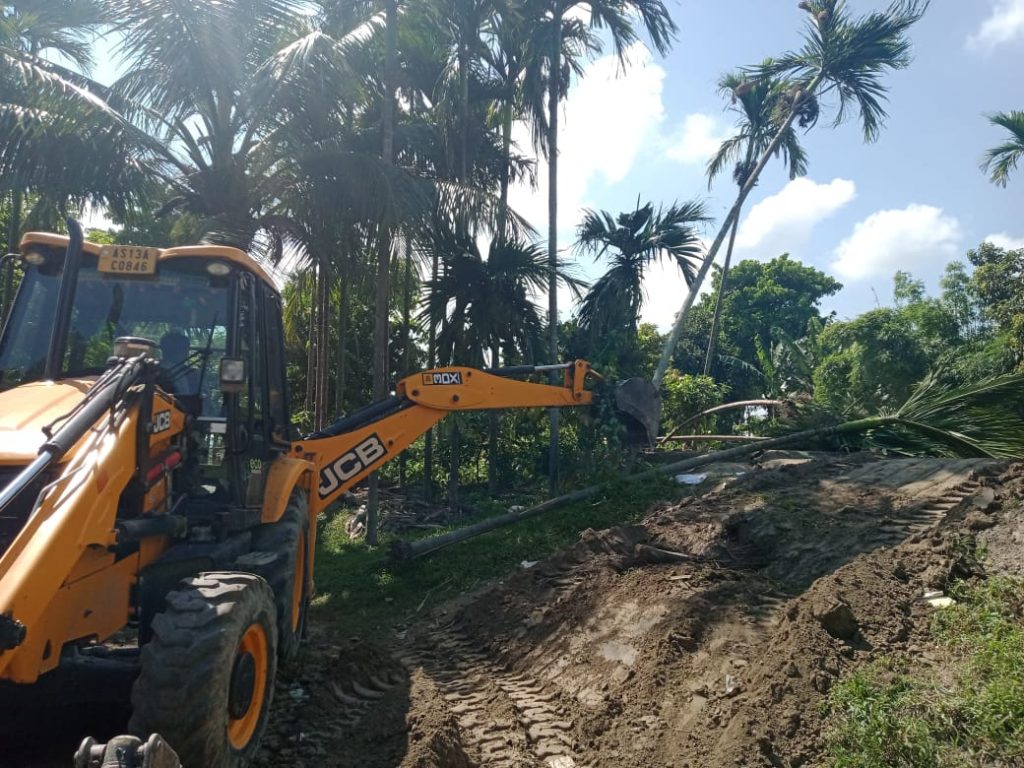 ‘The land belonging to the indigenous people has been encroached upon on a large-scale with a well-designed conspiracy by a group of well-organised encroachers,’ the government said. Photo: Debananda Medak.

The team was assisted on the ground by members of the peasant rights group Krishak Mukti Sangram Samiti (KMSS) and All Assam Minority Students Union (AAMSU). 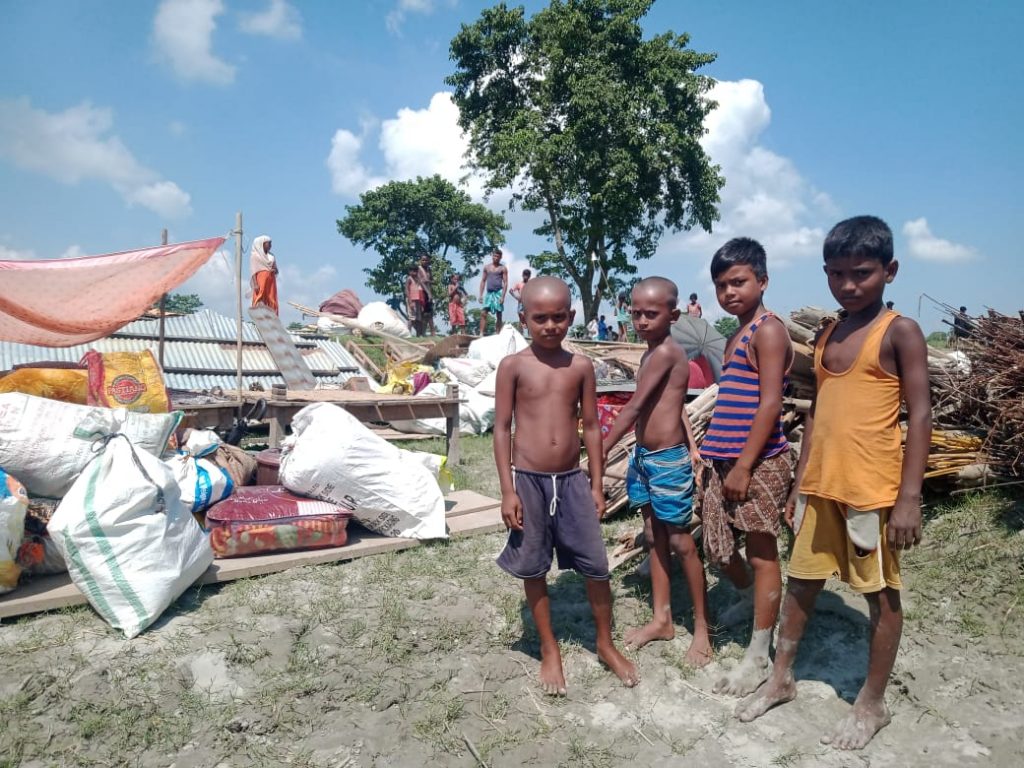 The fact-finding committee’s report had highlighted that, when the affected people came to meet the members, they brought with them the proof of their names. Photo: Debananda Medak.

The committee’s report had also accused the BJP government of “unleashing its pro-corporate agendas in terms of the [three controversial] Farm Bills” through Project Gorukhuti and of “playing a shrewd communal agenda to divide the people” by claiming that a large chunk of the evicted land belonged to a Shiva temple.

As per the report, the “pre-historic” temple was set up by one of the Hindu families which had settled in the area in the 1980s.

The fact-finding committee’s report had highlighted that, when the affected people came to meet the members, they brought with them the proof of their names in the updated National Register of Citizens (NRC), an official document on the citizens of Assam as per its exclusive citizenship cut-off date – March 24, 1971.