Mevani had been re-arrested on Monday immediately after he got bail in a case relating to tweets criticising Prime Minister Narendra Modi. 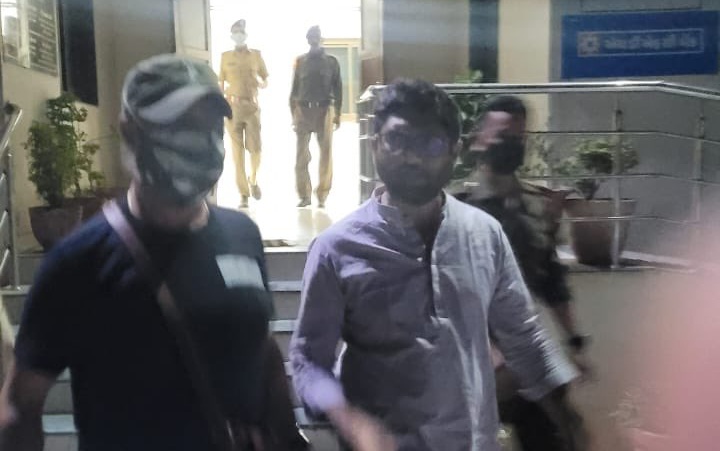 Jignesh Mevani being taken into custody by the Assam Police. Photo: Twitter/Kanhaiya Kumar

The second case, for which Mevani was re-arrested, was based on the complaint of a woman sub-inspector posted at Kokrajhar police station who alleged that the Gujarat MLA had assaulted her.

On Tuesday evening, Mevani’s advocate Angshuman Bora told The Wire that his bail plea had been rejected by the chief judicial magistrate, Barpeta, Mukul Chetia. The MLA, Bora continued, has been sent to five-day police custody. “We will be moving a bail application at a higher forum may be day after,” Bora said.

The Wire has accessed a copy of the FIR which states that a woman sub-inspector posted at Kokrajhar police station had filed a complaint with the station officer of the Barpeta Road police station on April 21. In it, the policewoman claimed that she was “escorting the arrested accused person Jignesh Mevani” in connection with the Kokrajhar case from the Guwahati airport to Kokrajhar in a government vehicle along with two other senior police officials that day.

The officer said in her complaint that additional superintendent of police Surjeet Singh Panesar and TSI Mouti Basumatary were also present in the vehicle when the “assault” took place.

The superintendents of police in charge of Kokrajhar and Barpeta are Thube Prateek Vijay Kumar (IPS) and Amitava Sinha (Assam Police Service).

Mevani, an MLA representing Vadgam assembly constituency of Gujarat, was taken into custody by a team of Kokrajhar police on April 20 night from the western state on the allegation that a tweet he had written two days ago against Modi would “incite” enmity between two communities.

The arrest was carried out following a complaint lodged by a BJP leader in Assam, Anup Dey, a resident of Kokrajhar’s Bhabanipur village. On the basis of Dey’s complaint, police accused Mevani of criminal conspiracy (section 120-B); imputations, assertions prejudicial to national integration (153-B); deliberate and malicious intention of outraging the religious feelings of any class (295-A); intentional insult and provocation to breach public peace (504) and intention to cause fear and alarm in the public to commit an offence against the state or against public tranquility (501-1B) besides charging him under the Information Technology Act.

After his re-arrest on April 25 evening, Mevani’s lawyer Bora pointed out to The Wire that “while there was not even a whisper about this FIR even while the Kokrajhar police was vehemently opposing his bail plea at the lower court hearing on April 24 evening, once the bail was granted, the new case was mentioned and remand granted by the chief judicial magistrate at Kokrajhar.”

Mevani, who was elected as the MLA from Vadgam as an independent candidate, extended support to the Congress party in 2019. Leaders from multiple opposition parties and human rights activists have condemned Mevani’s arrest, calling it a blatant attempt to harass an outspoken leader.