The development could see the peasant leader be designated as a “terrorist”.

Guwahati: Charges under the amended Unlawful Activities (Prevention) Act have been filed against Assam leader Akhil Gogoi, who was arrested on Thursday. Under the new law, the Centre could designate him as a “terrorist” without giving him an opportunity to be heard.

According to The Print, Gogoi has been booked for “waging a war against the nation”, conspiracy and rioting in a fresh case registered by the NIA late on Saturday evening.

The peasant leader was arrested in the Jorhat district while he was participating in a protest against the Citizenship Amendment Act.

Gogoi could become the first person to be tried as a terrorist under the UAPA. A person may be declared a “terrorist” if the government finds them to be committing, preparing for, promoting, or being involved in an act of terror.

Meanwhile, in other parts of the state, protests continued against the Citizenship (Amendment) Act (CAA). Thousands joined in a massive protest against the CAA organised by poets, artists, film stars, musicians, intellectuals, choreographers, singers, song writers and others joined by denizens of the city at the Assam Engineering Institute at Chandmari in Guwahati.

A protest titled ‘No ‘CAA, A concert for peace and harmony, Voice of All Artists of Assam’ was spearheaded by contemporary singer and Zubeen Garg and All Assam Students’ Union (AASU) leaders. Garg took a jab at Assam Rajya Sabha MP Birendra Kumar Baishya by stating that an MP who cannot speak even Hindi or English voted in favour of the CAA.

Choreographer Uday Shankar declared that he will return two awards which were conferred by the state government. “My awards cannot be greater than Assam,” he said.

At the event, creative methods of peaceful protests included variations of the ‘Joi Aai Asom’ or ‘long live Assam’ slogan reverberated the field. From poetry rendition to dramatic enactments to songs of Dr Bhupen Hazarika to Assamese rap songs, the vehement rejection of CAA was palpable.

Two more people succumbed to bullet injuries on Sunday when police resorted to firing after protests took a violent turn. Eshwar Nayak from Udalguri district, who was working at a clothing retail store, was returning home at Downtown locality when he was struck by bullet. He was later shifted to the GMCH, where he succumbed to his injuries on Sunday.

Another person, Abdul Alameen also succumbed to bullet injuries on Sunday. He was shot at Lalungaon area of Guwahati by the police.

Chief minister Sarbananda Sonowal continued to air public messages that there has been a false ‘rumour’ that the CAA would result in lakhs of Hindu Bangladeshis settling down in Assam. He urged people not to fall for such ‘rumours’ and exercise restraints. He said those who indulged in violence were bent on creating disruptions in the state.

“The state will take punitive measures against those who indulged in violence. I respect all regional organisations and I urge people to keep peace,” he said. “What work I have been doing over the past few years is for all communities. I request all parents and teachers to care for their children’s education. Please cooperate,” the chief minister said.

After three days of curfew imposed to curb large-scale violent protests over the Citizenship (Amendment) Act, the city had seen a semblance of normalcy on Saturday when the restrictions were partially lifted from 8 in the morning till 4 in the evening.

Guwahati, which comes under the Kamrup (Metro) district had been under indefinite curfew along with districts such as Dibrugarh, Tinsukia, Golaghat, Lakhimpur, Dhemaji and Jorhat since Wednesday. Barring Guwahati curfew has been partially eased in other places.

By afternoon it became known that the internet shutdown will continue till Monday. Services have been suspended since Wednesday. Senior journalist Ajit Bhuyan of Nagarik Samaj said it was a worrying trend.

“A local news channel Pratidin Time has been facing technical difficulty. Its broadcast, even on DTH platforms, has been facing problems. This is a conspiracy of the state. We have to be careful,” said Bhuyan. 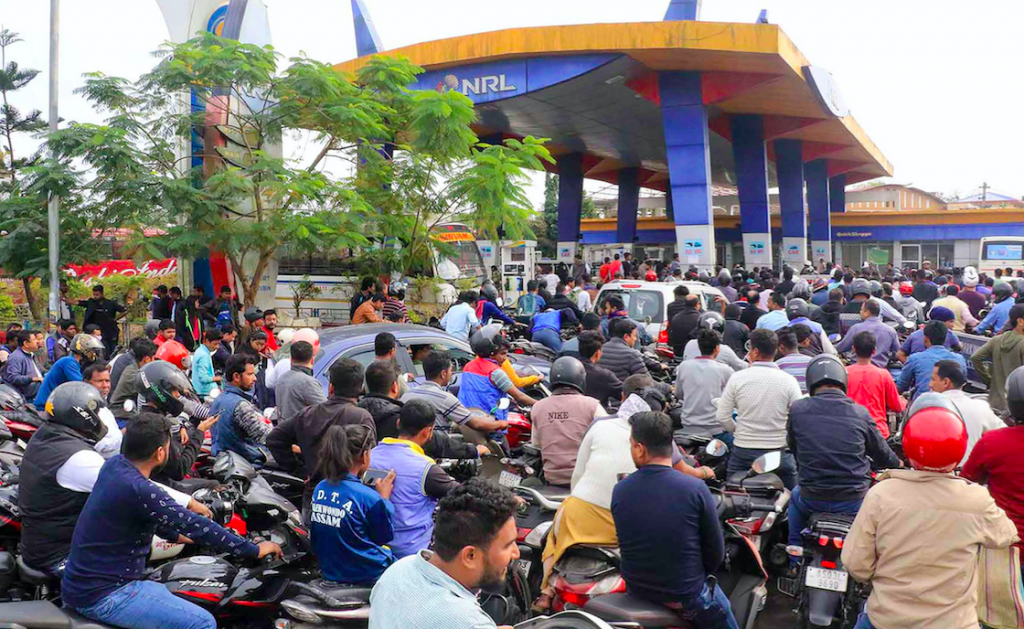 People wait in queues outside a petrol pump during relaxed hours of curfew, which was imposed in vew of various protests against the Citizenship Amendment Bill, 2019, in Jorhat, Assam, Friday, December 13, 2019. Photo: PTI

AJYCP at the press meet declared a new slogan: “No CAA, yes ILP”.

“On December 16 and 17, we will sit on a 36-hour hunger strike. On 18 there will be a gaon sabha on how CAA will destroy Assamese culture. On December 24 there will be a statewide, massive protest. We will go to Delhi and take the legal course as well,” said Palash Sangmai of AJYCP.

Students of the Veterinary College sat in front of their college gate protesting the Act. “They are trying to make Assam into another Kashmir. We will not let them do it. They shut down internet here as well,” said the protesting students.

AJYCP also stopped a train at Maligaon in the city. Until evening, scores of passengers were seen stranded at the Guwahati rail station. Nripen Bhattacharya, a public relations officer of the Railways said, “Long distance trains are leaving Guwahati as per schedule. However, trains coming from destinations of India towards Dibrugarh have been controlled.”

No local short distance trains have been running to and fro from Guwahati. “We are trying to send the Brahmaputra Mail from Delhi to Dibrugarh via Guwahati. We will similarly try to send stranded passengers on their way by Saturday evening,” said Bhattacharya.

As news spread that the Supreme Court will hear the petition filed by AASU on the Citizenship Act on December 18, AASU leaders visited the the families of the two young boys who were killed during the protests.

A demonstrator burns tyres on National Highway 17 during a protest rally against CAB, at Boko in Kamrup district of Assam. Photo: PTI

AASU leader Dipanka Nath said, “We don’t want to disclose what is mentioned in the petition. Today we visited families of Dipanjal Das and Sam Stefford. We think that more people have died but this is yet to be confirmed. ”

Protests continued on Saturday, though it is yet to be confirmed whether a tanker which caught fire at Orang, the driver of which succumbed to his injuries at the hospital, was burned down in Citizenship Act protests.

In pockets of upper Assam like Doomdoma and Kaliabor, there were scenes of protests either by AASU or AJYCP. Pro-talks ULFA leader Jiten Dutta was arrested from his home in Digboi in Upper Assam. Soon after his arrest protests broke out at Makum in Tinsukia district.

Senior journalist Prashanta Rajguru and senior retired police officer and writer Harekrishna Deka said BJP is out to control the narrative through fake news. They also criticised BJP leader Ranjit Das’s comment that egg, vegetable and meat sellers were behind the violence.

“The BJP is out to divide the people of Assam. It can take devious measures to stop us. It is trying to create fissures on communal lines,” said both Rajguru and Deka.

Even though curfew was partially lifted, essential commodities saw a steep rise in price. Things were more difficult for customers as purchase could not be made through electronic means. In some pockets of the city, some ATMS ran out of money. SBI brought out a mobile ATM to help cash strapped customers. Petrol depots saw long queues.

Note: This article was updated at 10 am on December 16 with the UAPA charges against Akhil Gogoi.