Borders Shift and People Move. So Who Are 'Illegal Immigrants', Really?

The term ‘illegal migrant’ in Assam immediately evokes a stereotype: the dark-skinned, Bengali Muslim peasant in a lungi and vest. 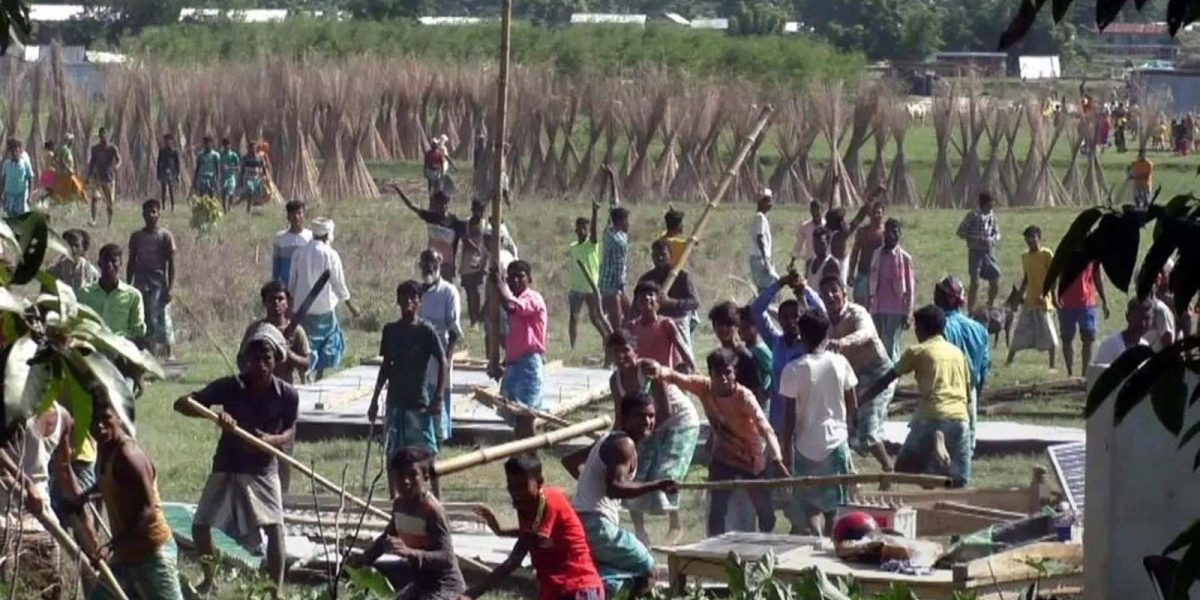 Assam is in the news for the wrong reason yet again – a horrific video showing an official photographer laden with cameras stomping on a man shot by the police moments earlier. Like the previous incident from the state that made headlines – the border clash between Assam and Mizoram police in July that left six Assam policemen dead – this incident, too, was only the latest eruption of a conflict that has been simmering, with occasional outbursts, for many decades.

At the core of this barbarism is the same issue that drove the entire National Register of Citizens process in the state, and the building of detention camps: alleged illegal immigration from Bangladesh. Assam is the only Indian state to have executed an NRC, excluding 19 lakh people after spending four years and Rs 1,600 crore. This pleased no one, and the NRC was rejected by its most ardent champions, the BJP and the All Assam Students’ Union (AASU).

They felt that 19 lakh, including a large number of Bengali Hindus, Gorkhas and tribals, was far short of the figures for illegal immigrants in Assam that have been tossed around for years. AASU had spoken of 50 lakh as far back as 1980, according to No Land’s People: The Untold Story of Assam’s NRC Crisis by Abhishek Saha. “At a special session of the Assam Assembly on 13 January 2020, Himanta Biswa Sarma, Assam’s health and finance minister, claimed that Home Minister Amit Shah had, during a meeting with AASU prior to passage of the CAA in Parliament, told the students’ body there were 70 lakh ‘foreigners’ in Assam,” Saha wrote.

Also read: The Police Did Not Bungle in Assam, They Committed a Horrific Crime

No one expects Mexicans or Chinese ‘foreigners’ to be pouring into Assam. The term is code for ‘Bangladeshi’, and the words are often used interchangeably. The term ‘illegal migrant’ in Assam immediately evokes a stereotype: the dark-skinned, Bengali Muslim peasant in a lungi and vest. From there to the assumption that they’re all ‘illegal’ immigrants, regardless of actual citizenship status, is but a short hop.

The assumption arose from prejudice and rested on guesswork. No one had ever tried counting undocumented migrants in Assam before the NRC. Under BJP governments at the state and Centre, and the supervision of Ranjan Gogoi as Chief Justice of India, it was the first serious attempt to determine, even if by a highly flawed process, what the actual figures might be. Despite all efforts, the number it finally excluded still fell far short of the fanciful figures that had passed into legend in Assam. Confronted with the possibility that their cherished belief that every Bengali of East Bengal ancestry in Assam was an illegal Bangladeshi immigrant might be incorrect, many chose to fault the NRC, rather than reject the cherished belief.

The father of Moinul Haque, the farmer shot dead and stomped on, said that their family has been settled in Assam for three generations. This is typically the case, because the truth about Bengali migration is that most of it happened, initially with the active encouragement of the colonial administration, in the early 1900s.

Ever since the annexation of Assam in 1826, following victory in the First Anglo-Burmese War, the British administration had faced labour shortages. Labour was initially imported for tea plantations but in time, the unexploited economic potential from cultivation of rice and jute in the vast Brahmaputra floodplains, which the rulers saw as “wastelands”, was also realised. The need for labour found mention in administrative reports. “Sir George Campbell (then Lieutenant Governor) thoroughly recognises that the great want of Assam is population,” noted the Report on the Administration of Bengal for 1872-73, when the province of Assam was being formed.

The migration of peasant farmers, mainly from Mymensingh, increased when Bengal was partitioned for the first time in 1905. In the ensuing redrawing of maps, East Bengal and Assam became a single province with its summer capital in Shillong and winter capital in Dhaka. Those who migrated then from East Bengal to Assam were moving within the same country, and the same province.

Unchecked migration of land-hungry farmers into the thinly-populated province became a problem of plenty in less than 15 years. By then, the partition of Bengal had been undone, and Assam was once again a separate province. In the 1921 Census, there was a hint of administrative misgivings. The 1931 Census which followed raised, for the first time, the spectre of Assam being overrun by East Bengalis. Census commissioner C.S. Mullan wrote in his report, “Wherever the carcass, there will the vultures be gathered together ― where there is waste land, thither flock the Mymensinghias.”

The days of vacant floodplains are long gone, and the Mymensinghias stopped flocking long ago, but from that dehumanising, racist document to more recent reports such as one authored by former chief election commissioner H.S. Brahma on protecting the land rights of “indigenous people of Assam”, to the NRC and the eviction drive in which Haque was shot dead the other day, there is a continuity.

Samrat Choudhury is a journalist and author, most recently, of The Braided River: A Journey Along the Brahmaputra. He is president of the Foundation for Media Professionals.