As thousands defied the curfew on December 12, Guwahati and the areas around it witnessed widespread police shooting.

Guwahati: Ramesh Talukdar, the superintendent at the Guwahati Medical College, responds only in numbers when asked about the casualties during the spontaneous street protests against the Citizenship (Amendment) Act that broke out in several parts of Assam. On Sunday morning, he sent the number “four”, indicating that the death toll has gone up by four.

Across the state, five people have been killed during the protests and several others injured.

On early December 12 morning, two young people died on the spot when a mix of army, paramilitary and local police personnel fired at unarmed protestors around Lalung Chowk, at the outskirts of the city. Thousands were out to defy the first day of curfew imposed in Guwahati and other parts of the Assam. Parliament had passed the controversial Act on Wednesday.

Sam Stafford (17), a musician, would have sat for his high-school-leaving exams this year. On December 11, as the Rajya Sabha passed the Citizenship (Amendment) Bill, like thousands of others he read about the final call for protest in the heart of the city, at Latasil Field, before mobile internet was shut down across the state. While the protests were breaking out, a curfew was imposed.

On Thursday morning, Sam began to walk towards Latasil Field, about nine km from his house in Hatigaon, a predominantly Muslim area. “Since it was a protest call for artists too, he went there,” said Sam’s uncle Bishop Stafford, also a musician himself. By noon, more than 2,000 people had gathered at Latasil Field. After fiery speeches by president of the All Assam Students Union Samujjal Bhattacharya, well-known Assamese pop singer Zubin Garg and film actor Jatin Bora, who resigned from the Bharatiya Janata Party a day earlier, the gathering dispersed. However, most street corners across the city saw continuing demonstrations. Stafford walked back towards his house.

By the time Stafford was in Hatigaon, senior Indian Police Service official and National Investigative Agency sleuth G.P. Singh, who had been put in charge of law and order in Assam, began to make rounds of the city. Singh’s appointment has angered everyone in the state, as his earlier stint in Assam was mired with controversies surrounding his alleged involvement in the fake encounters of the 1990s.

As Singh went around the city, protesters pelted stones at the official’s convoy. At G.S. Road, protestors shouted slogans against Singh, while paramilitary forces and police lobbed tear gas shells and fired some rounds in the air to disperse the crowds Later, on Friday, medical staff discovered that the bullets pierced the glass facade of Apollo Hospital, DY365 channel reported.

When Singh’s convoy reached Hatigaon, protestors greeted him with burning tyres. Most residents who witnessed the police firing said that street lights were turned off before the police fired on protestors. “One couldn’t differentiate if it was a protester, a bystander or someone just out to buy groceries,” said one of the witnesses from Hatigaon, not willing to be named.

At this point, Sam was still on his way home. “Some of Sam’s friends were already on the street protesting. It was at this moment that police reached the spot and started firing indiscriminately from point blank. A bullet hit Sam’s face and he died on the spot,” said his uncle. 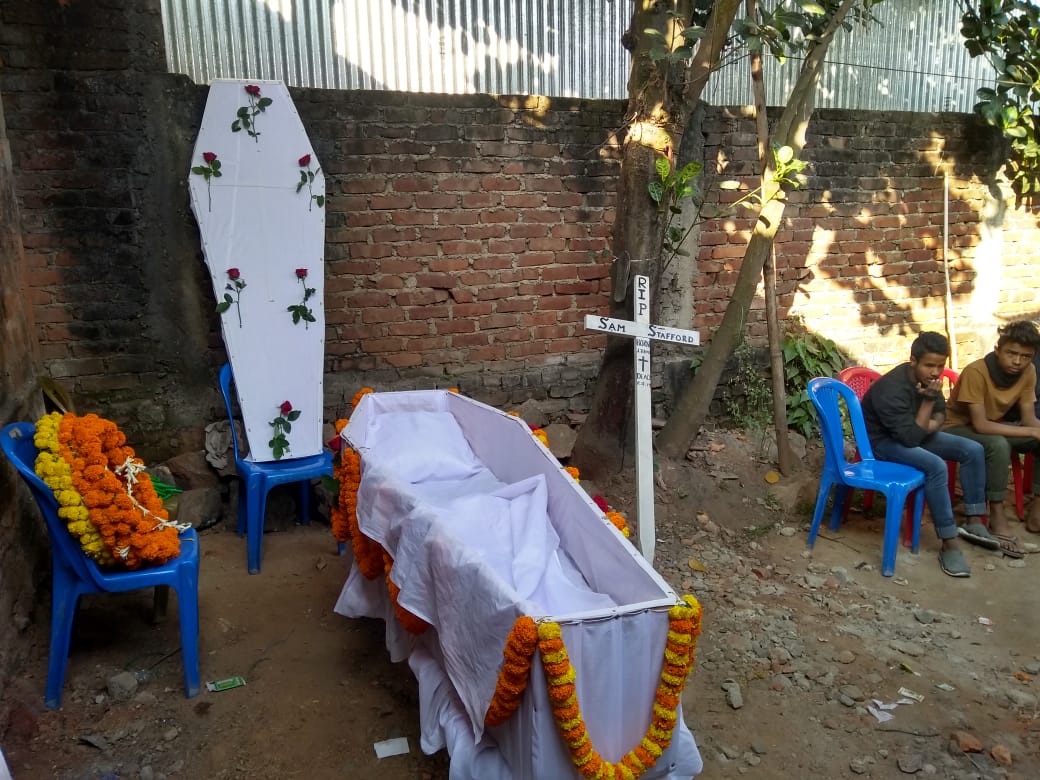 At the same time as the Latasil Field protest, people were also gathering at the outskirts of Guwahati at different spots. During one such protest, 23-year-old Abdul Amin joined his friends at Lalung Chowk, about one km from the Inter State Bus Terminus (ISBT). Ramzan Ali, a local shopkeeper was also there.

“Someone from the crowd told the police that they will not be doing anything except burning tyres to lodge their protest, and that’s what we were doing. At one point, a vehicle from Meghalaya was passing through the protest. The protesters let it pass, but saw the armed security forces chasing everyone who had gathered at Lalung Chowk by firing at them. One bullet hit Amin’s abdomen,” he said.

Later that evening, as security forces swept south Guwahati for street protests, a large crowd had gathered near Rukminigaon, burning tyres. Ishwar Nayak (25) was returning from Latasil Field, like thousands of others. By 6 pm, he was near his rented room, along with his roommate Kameshwar Boro.

Boro and Nayak worked at an apparel store owned by FBB. “We wanted to buy some vegetables and also go to the ATM. Nayak saw a spontaneous protest happening in front of Downtown Hospital,” said Boro. The police came chasing the crowd from the Rukminigaon side as everyone rushed inside a by-lane, recalled Boro. “He said that he was hit by a bullet on his waist. I thought like he was joking, because he was a funny guy. But then I saw the blood,” he added.

Boro called his team leader, Nayan Thakuria, and they took Nayak to Guwahati Medical Hospital. “He was one of the most punctual and disciplined colleagues. Like many of us, he joined the protests at Latasil. It was supposed to be peaceful. We never saw this coming,” Thakuria said, while waiting for his colleague’s body to be taken to his village in Udalguri. It has been over a year since Nayak left his father and two sisters at Majuli Tea Garden near Udalguri.

Also read: Why the Citizenship (Amendment) Bill Is Unconstitutional

Deepanjal Das (19), from Chaygaon, succumbed to bullet wounds at Lachit Nagar. A canteen cook at the District Sainik Welfare Board, a government body that works for soldiers employed by the Indian Army, Dipanjal was on his way home when a police bullet hit his abdomen. He died on the way to Guwahati Medical College. On Friday morning, Assamese daily Amar Asom declared Das to be the “first martyr” of the movement against the Citizenship (Amendment) Act. So did the Asom Jatiotababdi Yuva Chattra Parishad (AJYCP).

During the violent spree, apparently to control ‘street violence’, by the police, paramilitary and army, 26 others were injured, some grievously. Among those who sustained injuries was Rajen Medhi from Hatigaon, an auto driver who had gone to buy groceries and medicines. Nazneen Begum (51) and Nazma Afroz (45) were also injured by bullets. Nazma is a tenant at Nazneen’s house, and both were going to buy milk when they were shot by in Hatigaon.

Forty-five-year-old Azizul Hoque, a resident of Muslim Ghota in Sipajhar, also succumbed to his injuries. However, this was not due to police violence. “Azizul was warned by his relatives not to venture out with a fuel truck, as the protests were peaking in Mangaldoi and Darrang district. Azizul, however, stepped out and some miscreants burning tyres for a roadblock burnt his truck near Orang while he was inside it,” said Saddam Hussain, a local student leader.

According to G.P. Singh, the protestors were given fair warning about the curfew. Thousands, though, continued to defy the curfew to protest.

While the curfew was partially lifted in parts of the state on Sunday, people are yet to come to terms with the Centre’s brazenness in passing the Bill and the action against protesters. “What is alarming here is how one set of people can defy curfew and peacefully gather in a field without any repercussions, while in our neighbourhood they just openly fire on people,” said Shamimul Haque, a businessmen in Hatigaon.