Assam's struggles with immigration are unique and the CAA brings up memories of a subjugation which many in the mainland are unfamiliar with.

People participate in a protest against the Citizenship Amendment Act in Nagaon, December 20, 2019. Photo: PTI

It has been over a month now that the Citizenship Amendment Bill was passed by both houses of the Parliament and became an Act.

The Union home ministry on the night of January 10, 2020 issued the notification that the Citizenship Amendment Act (CAA) would be enforced with immediate effect.

The streets of Assam for the last one month echoed once again with the immortal tunes of late Dr. Bhupen Hazarika’s songs. Songs that shriek and reveal the spirit of the land, its people and their struggles.

For the Axomiya mass, it is a reminder and rekindling once again of the six-year-long struggle of the Assam Agitation between 1979-1985. The concern remains the same; only that this time around the entire nation has woken up to voice its angst against the same grouse.

This primarily owes to the fact that this time the issue extends beyond Assam and for the larger nation it is more a matter of the exclusionary politics of the ruling party which has transgressed the secular ideals of the Indian constitution.

An important question arises at this juncture. For once, let us assume that a persecuted population irrespective of religion, from neighbouring nations, are granted citizenship by India. Such a move would be hailed and celebrated by the entire nation.

However, nothing much would change for people in Assam and Tripura (since the remaining states in the region and minuscule parts of Assam and Tripura are protected as under the 6th Schedule of the Constitution and the Inner Line Permit).

The narrative of the northeastern frontier, more so for Assam and Tripura remains completely different. Protests in the frontier, in vociferous tones, started much before the mainland agony. However, like always, little did this draw national attention. Over the last several days, some have questioned about the scanty writing and expression of voices from Assam. This owes to several factors that ultimately contribute to the overall silencing of the entire northeastern discourse.

One cannot understand the reason behind the intensity of the protests in the northeast, without delving into the region’s nuanced history.

Also read: India Needs to Understand Why the Northeast is Protesting Against CAA

In order to understand this anti-CAA stance in Northeast, primarily in Assam and Tripura, it is necessary to look at the long history of struggle and oppression faced by the people of the region. Assam is a multi-ethnic and multi-lingual state, as diverse as India itself.

The rich demographic composition of the state that includes multiple indigenous groups and identities make issues in the region more complex and layered. Very importantly, there is also a large number of Bengal-origin Hindus and Muslims with roots in East Bengal, now Bangladesh. The protests in the state have been interesting as people in huge numbers from these communities have also expressed solidarity.

The state has had a long history of tumultuous relationship with East Bengal. Assam’s struggle with so-called illegal migration is not new and should not be belittled at any cost. 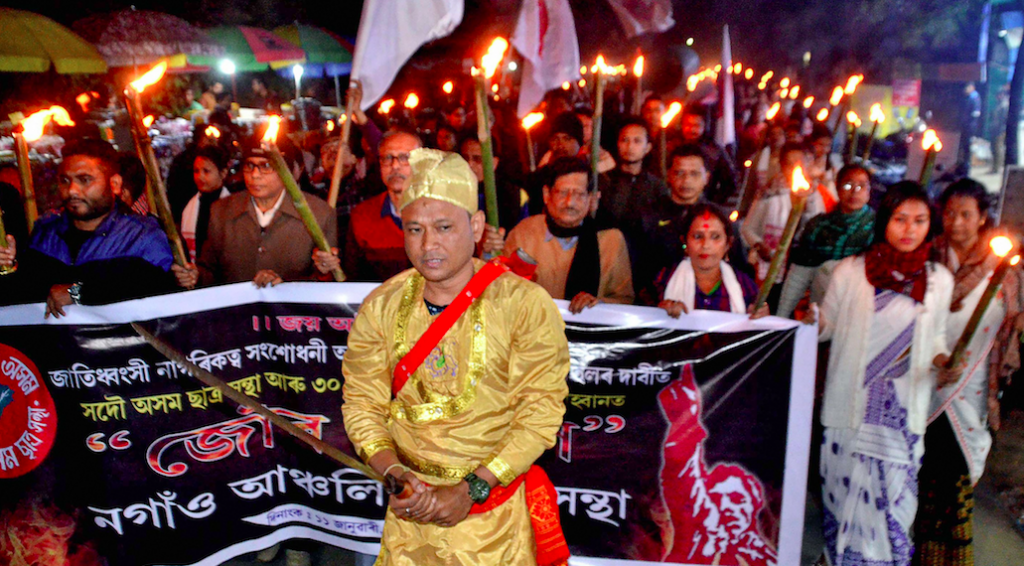 A January 11 protest led by AASU, against the CAA, in Nagaon, Assam. Photo: PTI

The struggle started few years after Assam fell into the hands of British colonial administration with the signing of the Treaty of Yandaboo in 1826. Soon after, Assam was placed under the administration of Bengal and in 1836, Bengali replaced Assamese as the language of administration and medium of instruction.

Imposition of Bengali as the medium of instruction and language of administration led to frustration not only among the intelligentsia but also among common people. This led to slow progress of education in Assam and the cultural life and identity of the indigenous people underwent a slow degeneration. Though writing of Assamese and other traditional languages were discouraged, initial years of this phase did not see mass opposition.

Opposition gained its momentum only when colonial administration started to bring two different sets of Bengalis from East Bengal and settled them in: a. fertile agricultural lands and b. in administrative positions.

As far as settling this population in the agricultural land was concerned, prior to the signing of Yandaboo treaty, much of today’s Assam was under Burma and repeated invasion of Burma led to the extermination of a large share of the state’s indigenous people leading to a massive amount of fertile agricultural land being left with no owners.

Furthermore, colonial administration encouraged migration of Muslim Bengalis from East Bengal to these unused fertile lands in order to facilitate the cultivation of rice and cash crops like jute. Abundant fertile land also naturally attracted many Muslim Bengali peasants to the area. On the other hand, administrative positions of the state were filled with Bengali Hindus. The sudden rise in their numbers in government jobs and continuous deprivation of the indigenous population led to frustration amongst the Axomiya population.

Unchecked migration from East Bengal started to put pressure on the once resource-abundant state and conflict started to simmer. The pressure on the state and the fight for resources became much more prominent and stronger with migration occurring during the partition years of 1947 and Bangladesh Liberation War period ending in 1971.

Migration not only created demographic imbalance but also struggle for land and resource ownership. Contestations over access to land and resources continued to brew for decades, affecting the promise and provisions of the Assam Accord of 1985.

The concern raised by those protesting against the CAA once again reiterate and scratch old wounds where threat to language, culture, political rights and overall way of life of the Axomiya mass remain the focal apprehension.

Repeated betrayal by the ‘mainland’ and local political class has also left a deep scar historically. CAA may jeopardise the slow peace and reconciliation achieved in the last decade.

The nature of protests and participation of people in anti-CAA rallies in Assam indicates that Assam rejects the communal agenda of the current government and diversionary tactics of the mainstream media. In these protests, the power of music and visual art as a symbol of resistance and political expression has been well exemplified by the people of Assam.

It is perhaps due to this nature of the struggle, where the angst of the commoners move beyond the Hindu-Muslim divisive politics, that Assam or Northeast as a whole is not able to garner the attention and empathy of mainland politicians, media and the intelligentsia. To add to this, there is yet another section that has conveniently been calling Assam ‘xenophobic’.

Such a call-out is easy by simply ignoring the region’s history, its continuous struggle, and complete silencing of the discourse within mainstream politics.

But having said that, people of Assam also need to realise and introspect tragic events in history like the Nellie massacre, Bihari Bhagao movement and recent controversy surrounding ‘Miya’ poetry. Any dissenting voice and critique of such episodes within the state need to find space rather than being completely muted.

Even at this crucial juncture when we are struggling for survival of our culture, language and indigenous people, we must not also ignore problems in us, without addressing which we may not be able achieve what we are fighting for.

In the backdrop of this tangled history of identity and politics of assertion and negotiation, the larger coverage of the anti-CAA stand in the country has failed to cover the muddled layers of Assam’s lonely struggle. What has now become a matter of communal politics, of secularism and has often been reduced to merely an anti-Muslim Act, also concerns cries raised by the people of Assam, for their land, culture and identity.

Minakshi Bujarbaruah and Rituparna Kaushik Bhattacharya are researchers based out of Assam and New Delhi respectively.