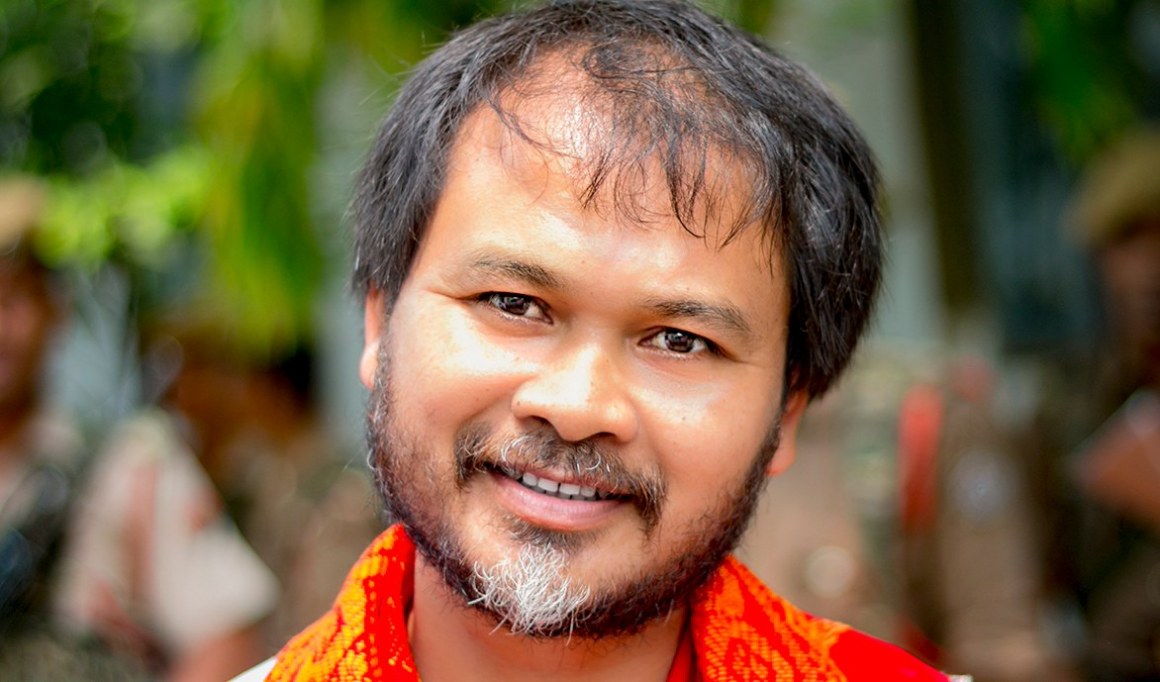 New Delhi: Last week, as many as 1,200 inmates of Assam’s Guwahati Central Jail resorted to a hunger strike, demanding the release of peasant leader Akhil Gogoi and presenting some COVID-19 related pleas to the authorities.

Gogoi, the founder of the popular grassroots organisation Krishak Mukti Sangram Samiti (KMSS), has completed a jail term of 200 days on June 29 along with youth leaders associated with KMSS – Bitu Sonowal, Dhaijjya Konwar and Manas Konwar. Led by Gogoi, these young leaders were at the forefront of the anti-Citizenship (Amendment) Act protests that broke out in the state in early December. Considered severe critics of the BJP-led state government, all of them have been arrested under the draconian Unlawful Activities (Prevention) Act on the charge of being ‘Maoists’.

According to a report in the Assamese daily Aamar Asom, the inmates resorted to hunger strike on June 25 and June 26 demanding the fulfilment of eight pleas, including Gogoi’s release from the Guwahati Jail. So far, several prominent people including Rajya Sabha MP Ajit Bhuyan had met state chief minister Sarbananda Sonowal seeking Gogoi’s release.

The inmates’ demands also included quarantining new inmates brought to the jail before they were allowed to occupy the cells with the existing inmates. The news report said the inmates had submitted a written plea to the jail authorities in that regard a couple of times besides holding a meeting amongst them on June 24. “However, the jail authorities set aside their demand and have begun bringing in new inmates from June 24 onwards without conducting the test for COVID-19. Due to this, the health of 1,200 inmates has been put in jeopardy. To protect themselves, the inmates, therefore, decided to resort to hunger strike from 9 am onwards on June 25. On June 26 too, they continued their strike.”

With the situation turning volatile, several top jail officials and district authorities reached the premises to talk to the inmates. As per reports, Gogoi, who has been lodged in Guwahati Jail since April 23, too played an active part in the hunger strike along with the rest of the KMSS leaders demanding better healthcare for the inmates to protect themselves from the pandemic, besides rights such as a 24-hour supply of pure drinking water, and permission to meet their lawyers and family members beyond the present scheduled ‘two minutes’ of conversation. The KMSS leaders have not been able to meet their lawyers and family members either. The jail inmates have access to only one landline phone to receive phone calls from their family and lawyers.

Gogoi was joined in the strike by all prominent inmates, including some top leaders of armed groups United People’s Front and United Liberation Front of Asom, anti-CAA protester and Jawaharlal Nehru University student Sharjeel Imam and others.

According to a local news report, he too had approached the jail authorities “repeatedly” seeking better health facilities for the inmates “but there has been no response”.

Inspector general of prisons, Dasarath Das, claimed to Time8 website that the inmates withdrew the strike “on June 25”. Das said it was after they “negotiated and agreed to recommend the demands to the state government for early consideration”. Das also said that all new inmates have been kept in 14-day quarantine in separate wards within the jail premises.

Meanwhile, the National Alliance of People’s Movement (NAPM) has issued a statement condemning Gogoi’s incarceration for the last 200 days and demanded his “immediate release and withdrawal of all ill-conceived charges foisted against him.”

In a press statement on June 29, it also demanded “the release of young leaders Bittu Sonowal, Dhaijya Konwar and Manas Konwar associated with KMSS and its sister organisations”, adding, “We salute the spirit of these young people of Assam who are fearlessly fighting a communal and fascist regime, and its divisive laws, in the face of intense repression”.

Among other activists from outside the state, Medha Patkar, associated with the NAPM, had also visited Gogoi in jail.

Since his arrest on December 12, 2019 from Jorhat, Gogoi has been kept in various jails across the state besides being brought to Delhi for a few days by the National Investigating Agency without seeking the permission of the local NIA court.