A New Optics of Freedom: What Asif, Natasha and Devangana Mean to India

The state fears the young. They are everywhere. And they are fearless. If the stranglehold of near-impossible bail under UAPA is gradually loosened, the misuse of the law may become less and less tempting. 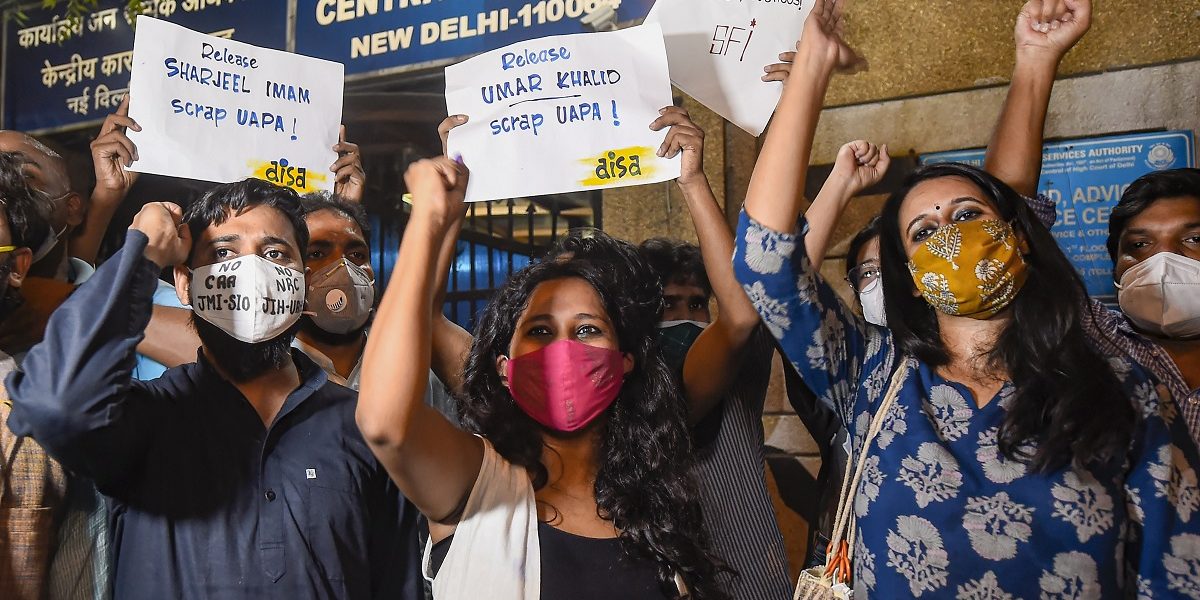 On June 17, 2021, three young student activists tilted their heads up to the night sky outside a prison gate in Delhi and called out these words for all to hear.

Their fists were raised. Faces wore smiles of astonishing brilliance. Eyes were incandescent. The dusty resistance slogan was piercing in how close it came to reality. They had just been released on bail from the infamous Tihar Jail, the largest prison complex in South Asia, after more than 365 days. And yet here they stood, unblinking before scores of camera lights. Entirely unafraid. Undimmed by the harshness of what they had been made to endure.

It was a liminal moment. The bail orders from the Delhi high court would be challenged in the Supreme Court of India the very next day, June 18, by the Delhi Police. All three of them could be behind the same bars again. They knew this. Besides, this was just bail. They still face the full might of the state in what will certainly be a prolonged ‘terror conspiracy’ trial, if it ever starts.

The youngest of them, Asif Iqbal Tanha, is just 25 years old, a BA student of Persian at Jamia Millia Islamia University. Natasha Narwal and Devangana Kalita are in their early 30s, PhD students in the Women’s Studies Department at JNU. Natasha was kept away from her dying father Mahavir Narwal. She lost him to COVID-19, after which she was briefly released on bail, too late for any last words.

Multiple mikes were thrust at their faces. Under the glare of intense scrutiny, in the kind of timeless-flash-moment when the best of us can fumble and say anodyne things, one heard searing moral clarity from these young people. One journalist asked – do you have regrets? Only that the movement against the Citizenship (Amendment) Act we were part of was so brutally oppressed, said Devangana. We are out because of the duas of all the women who were part of these protests, she added, recalling the Muslim women who had led the anti-CAA protests. Natasha said she wished she could have been with her father as he struggled with COVID-19, and in the same breath spoke about the dehumanisation of prisoners inside Tihar. She spoke about prison conditions, of the many who continued to suffer immense personal loss, away from the eyes and conscience of the world. Asif said, “Insaaf aur haq ki awaaz kabhi dabti nahin hain (Voices for justice and rights can never be silenced).” He spoke of the right to protest, of our mighty constitution and of Dr Babasaheb Ambedkar. And he sported a sassy face mask which he himself had crafted the day before, while waiting for the release order. It made clear exactly where he stood – No-CAA, No-NRC.

A genie is out of the bottle

Asif Tanha, Natasha Narwal and Devangana Kalita were all equal citizenship protesters against the CAA/NRC. But they are charged under UAPA, India’s notorious anti-terror law. This is why the Delhi high court’s bail orders releasing these three young activists were a landmark – making a clear distinction between the right to protest and acts of terror; putting the phrase ‘prima facie true’ under legal scrutiny (Section 43D (5) of UAPA, an ‘extraordinary law’ bars granting bail if the court believes the accusations are ‘prima facie true’). The court said it did not see prima facie evidence of acts of terror, so it gave bail under regular law. The Supreme Court has now stopped these orders from being used as a legal precedent until it examines the matter next month.

But, there is legal precedent and then there is story-telling. And in the Delhi high court’s orders the genie of a disgraced narrative is out of the bottle:

“It has been a recurrent theme, repeatedly urged by the State, that what was contemplated and in fact brought to fruition was not a typical protest but an aggravated protest which was intended to disrupt the life of the community in Delhi. We find ourselves unpersuaded and unconvinced with this submission since we find it is not founded on any specific factual allegation and we are of the view that the mere use of alarming and hyperbolic verbiage in the subject charge-sheet will not convince us otherwise.

“Hyperbolic verbiage” and “Spun by grandiloquence” – polite euphemisms for ‘fiction’ are the core of the charge sheet created by Delhi Police in the Delhi riots conspiracy case. And now a respected court of law has said it. Underpinning its words with reason and logic. This may not be legal precedent but there is nothing to prevent any other court from walking the same reasonable path.

Watch: ‘No Regrets, Will Always Be Proud of Anti-CAA Movement’: Natasha, Devangana, Asif

UAPA: The tempting lock without a key

Can the lock be broken? On June 15, 2021, the same day that the Delhi high court delivered its judgment, two young men, Mohammed Ilyas (38) and Mohammed Irfan Gaus (33), walked out of Taloja Jail after 9 long years, acquitted of all charges by a special court under UAPA. There was just no evidence. Gaus, had been granted bail two years ago by the Bombay high court, in an order less eloquent but on the same grounds – prima facie case not made out. “Prima facie, at this stage, we are … of the opinion that, perusal of material made available to us does not show that there are reasonable grounds for believing that accusations against the appellant/accused no.4 are true…. that the bar of Section 43D(5) of the U.A.(P) Act is not applicable to his case.” Four months later, the bail was stayed by the Supreme Court to an unjust end; an innocent man rotted in jail for another year and half before being cleared of all charges.

Just a day after the bail orders spelt freedom for Asif, Natasha and Devangana, on June 16, 2021, the Karnataka high court granted default (statutory) bail to 115 people arrested and charged under UAPA in connection with the East Bengaluru riots last year. Reason – the NIA failed to file a charge-sheet within 90 days and then got an extension order from the trial court, without informing the accused. Legally unsustainable, the court said.

And earlier this year, on February 1, 2021 a Supreme Court bench headed by CJI N.V. Ramana, upheld the bail granted by the Kerala high court to another UAPA accused, K.A. Najeeb, on grounds of prolonged incarceration and violation of Article 21. He had already served five years, and the NIA had 276 more witnesses to examine.

Also read: ‘Had There Been a Non-Muslim With Us, We Would Not Have Been Arrested’

If the stranglehold of near-impossible bail under UAPA is gradually loosened, the misuse of the law may become less and less tempting. Clichés tell truths. Process is intended to be punishment under UAPA. There was a 72% increase in UAPA arrests between 2015 (1124 arrests) to 2019 (1948 arrests) the Union minister of state for home affairs, G. Kishan Reddy told the Lok Sabha in a written reply on March 9, 2021. And just 2.2% of cases registered under the UAPA between 2016-2019 ended in convictions. You do not need to be a legal expert to understand how perverse this is.

The legitimising of this magnitude of injustice comes not only from the brute force of the carceral state, but from its ability to conjure believable optics. In the Delhi riots cases, a PhD scholar and student activist like Umar Khalid was vilified and targeted as a Muslim jihadi and terrorist long before his arrest under UAPA. In April 2021, the Delhi Police, through the lock-up in charge of the Karkardooma Court, filed applications to produce Umar Khalid and Khalid Saifi for each court appearance in ‘handcuffs and fetters in both hands from back side’ as they are ‘high-risk prisoners’. This was all part of a strategy to create prejudicial optics. Parade them as the dangerous gangster-criminals of the million movies that reside deep in our collective psyches. The applications were denied and the court pulled up senior officers. The state’s desperate effort stood exposed.

Asif, Natasha and Devangana at the moment of their release have further stymied the desired optics of UAPA. The law is used against dissenters because prison is meant to make you bend and crawl. To break you, if you don’t. To isolate you. To make social pariahs of you. These three emerged unbroken and loved. Jahan Ara Begum (Asif’s mother), Kalpana Kalita (Devangana’s mother) and Mahavir Narwal (Natasha’s father, while he lived), are ordinary Indian parents, who have embodied dignity, public solidarity and strength for their children. You have done nothing wrong. We are proud of you. These were their messages.

This is why the state fears the young. They are everywhere. They could be your fearless daughter and your feisty son. They are Asif Tanha, Natasha Narwal and Devangana Kalita. They are Umar Khalid, Disha Ravi and Gulfisha Fatima. They are Nodeep Kaur and Amulya Leona. They are creating a new optics of freedom. Do your worst, they say. So, what do you do when you have already done your worst? How many fearless people can a fearful state incarcerate? The young are at the gates.