Charged under the UAPA for ‘conspiracy’ in the Northeast Delhi violence and fresh out of jail, a Jamia student activist stands firm for the India he believes in. 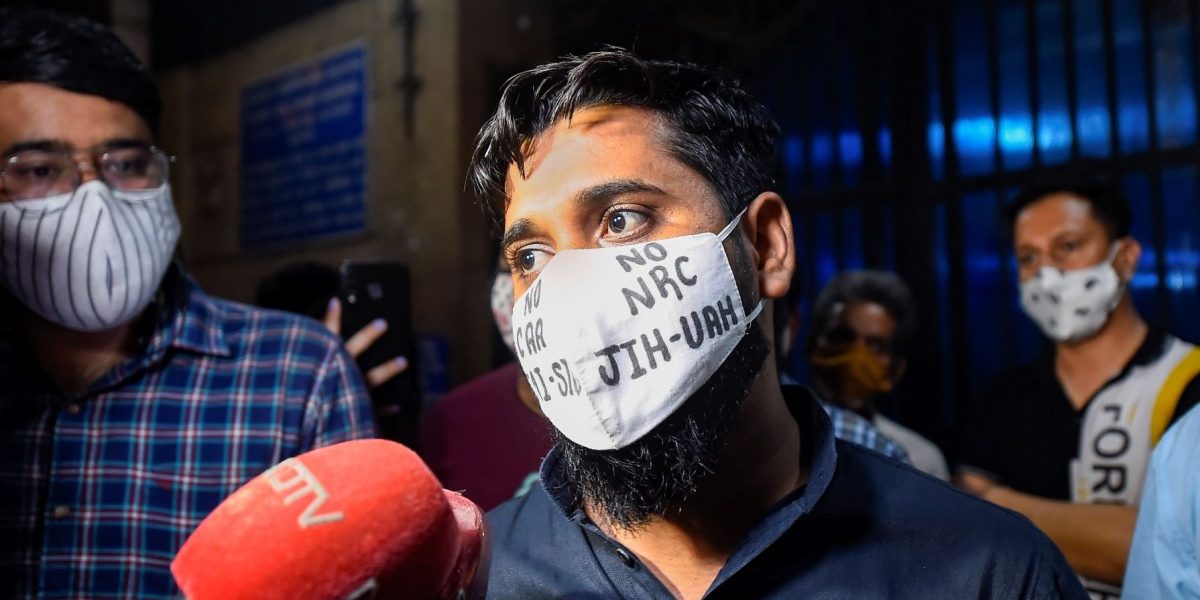 Asif Iqbal Tanha after his release from prison. Photo: PTI

Being out of prison does not guarantee freedom, but incarceration is the worst and the harshest form of punishment that exists. I never would have known what freedom means had I not been thrown behind bars by a nefarious nexus of government machinery, the police and the media.

My experience in jail has only strengthened my thirst for freedom and my desire to breathe fresh air. After spending 13 months in jail, any person with the slightest political sense would get a fair idea of what regimes are afraid of, why they misuse laws and why tyrants are compelled to act the way they do. I did get the idea and perhaps all political prisoners do.

As you will recall, the Citizenship Amendment Bill (CAB) was introduced in the parliament in December 2019. According to it, Hindus, Sikhs, Christians, Buddhists, Jains and Parsis coming to India from Pakistan, Bangladesh and Afghanistan would not be considered illegal migrants and would be granted Indian citizenship.

The point of contention was that the bill makes religion a condition of citizenship. Next, the Muslims were deliberately omitted from the list of religions required to make a person eligible for citizenship. The division of citizenship rights based on religion is a blatant violation of the Constitution of India. Nowhere does the Constitution of India deny basic rights to citizens on the basis of religion. Yet both the houses of parliament passed this anti-constitutional and anti-Muslim bill, violating the very principles and values of our constitution. And after the President’s assent, it became the law.

Why the CAA was passed

Both before and after India’s independence, the Muslim community has contributed a great deal to making the country strong and beautiful. But unfortunately, those in power today are trying to divide the nation along the lines of religion. To fulfil this agenda, they are attempting to reduce Muslims to second class citizens. Perhaps they did not realise that such a status would never be acceptable to the Muslims of India.

The question is: What was the need of such an amendment to an already existing citizenship law? To answer it, one must understand the National Register of Citizenship (NRC) conducted in Assam and its aftermath.

After a Supreme Court verdict, the process of preparing the NRC was carried out in Assam and the names of about 19 lakh people failed to appear in the final list. Of these 19 lakh people, only five lakh were Muslims while the remaining 14 lakh people belonged to other religions.

Since the current regime plans to implement the process of NRC in the entire country as the Union home minister himself announced in parliament, there is a good chance that a large population may not be able to furnish decades-old documents the way it happened in Assam and as a result, will be omitted from the register. Therefore, to grant them citizenship, the Citizenship Amendment Act (CAA) was introduced, defying constitutional values ​​and principles.

Muslims were deliberately excluded from the list of people eligible for citizenship. So a large section of the minority community is stripped of civil rights and is entangled in a bureaucratic web in its need to prove its citizenship. Hence, the anti-CAA-NRC movement that erupted in Jamia and Shaheen Bagh is always referred to as a movement to demand equal citizenship rights.

Ever since the present government came into power, there has been a series of anti-Muslim statements which have resulted in hate attacks on Muslims across different parts of the country. Riots have been fuelled and attempts made to demolish mosques by declaring them illegal or built on sites belonging to a particular religion. At many other places, innocent Muslims have been implicated on false terror charges.

Attempts have also been made to malign the image of minority universities. Not only are these incidents well-planned but also carried out with the agenda of vilifying an entire community before a large population of the country. The ultimate aim is to paint Muslims as a false potential threat to the country to appropriate the votes of the majority community so that the political masters may continue to command their will and hold power.

The attitude of the government since 2014 has made many things clear to the Muslims. This is why, when the anti-CAA-NRC movement erupted in December 2019, the Muslim community not only protested against the CAA, but also strongly raised the questions of its political rights, its share in power, education, administration and other democratic institutions.

After the CAA was passed, a protest was organised by the students of Jamia Millia Islamia on December 12, 2019. The next day, the Jamia students tried to march against the draconian law but the Delhi Police violently stopped the students on their way to parliament. Hundreds of tear gas shells were fired, thousands of students were lathi-charged and about 40 students were detained.

I was one of those 40 students. When we were released five hours later, we returned to our alma mater and found the roads of the campus strewn with tear gas shells fired on students by the police. There was chaos everywhere but it did not subdue our morale and we continued our struggle the next day.

On December 15, the Jamia students organised another protest march. This time the police acted even more ferociously, lathi-charging the students and other people on the roads of Jamia Millia Islamia and forced the protesting students to vacate the premises.

But the police brutality did not end there. The cops entered the campus without the permission of the university administration and lathi-charged the students in the library. As if this barbarity was not enough, the police smashed chairs and benches in the premises. To hide its actions, the police even damaged several CCTV cameras installed there.

Several female students beaten by police personnel who had forcibly entered their departments lay unconscious on stairs and inside bathrooms in the campus all night through. The nearest hospitals in the vicinity of the university, Al Shifa and Holy Family, were flooded with wounded Jamia students and had no beds available for any other patients. Tear gas permeated the Jamia campus and the neighbouring Jamia Nagar colony and there was blood everywhere.

Our beautiful alma mater had been transformed into a war-zone. But we were not demotivated by it nor was our resolve shaken. We were aware that this was not the struggle of one community or one university but that the future of India was at stake. Our bodies were wounded but the government had failed to break our spirits.

On December 16, two FIRs were lodged by the police at the police stations of Jamia Nagar and New Friends Colony in which several activists from Jamia university and neighbouring areas were named. I was one of them. I was arrested in May 2020 on the basis of FIR no. 298/19 lodged at the Jamia Nagar police station.

The pandemic and police ploys

Despite the ordeal, the Jamia students refused to bow down and continued their struggle against the CAA and the NRC. The protest that emerged from the university campus gained momentum and soon spiralled into a larger movement. Protests against the CAA and NRC soon erupted across different corners of the country.

These protests were mostly spearheaded by Muslim women. For several months, students and Muslim women fearlessly propelled the movement at its two epicentres – the Jamia university and Shaheen Bagh. The movement shattered all the misconceptions fuelled by the media and the government about Muslim women. They no longer appeared helpless and persecuted. Instead, they were boldly confronting the government, taking to the streets to demand their rights.

Several attempts were made by fascist forces to cripple the movement and to intimidate the people. Sometimes, they sent goons to fire shots at Jamia and Shaheen Bagh protest sites. Sometimes, spies in burqas were posted there. Certain so-called news channels tried to taint the entire movement by levelling false allegations against the women leading the protest at Shaheen Bagh. The protest was said to be funded by foreign sources. However, despite such tribulations, the protestors refused to back down.

Meanwhile, anti-Muslim violence erupted in Northeast Delhi in which many Muslims were killed and their shops and businesses set on fire. According to government data, 53 people lost their lives during the violence.

Also read: ‘I Believed in the BJP and I Was Jailed’: How a Muslim Party Member Was ‘Framed’ for Murder

Also, people were advised against gathering in large numbers at the protest sites owing to the rising number of COVID-19 cases. Therefore, the number of protestors reduced and taking advantage of this, the police removed the banners and tents of the protestors at several sites. In view of the worsening situation due to the pandemic, the people also decided to halt the movement for some time.

But the actual ploy of the police began during the lockdown. In the name of investigating the violence in Northeast Delhi, the Delhi Police began sending notices to and arresting the people who had actively participated in the anti-CAA-NRC movement. At the time, all of us were engaged in distributing relief material among the poor people affected by the lockdown.

I was summoned several times for ‘investigation’ and was finally arrested on May 17, 2020, in the case of the Jamia violence. But as soon as the possibility of getting bail arose, the police accused me of hatching a conspiracy in the case of the violence in Northeast Delhi, slapped charges against me under the Unlawful Activities Prevention Act (UAPA) and arrested me again.

Back to the streets

The current regime neither allows us to protest nor carry out relief work to help the poor. Several student leaders and social activists, I amongst them, think for our country, our constitution, the rights of our people and our democracy. We protest and carry out relief work so that together we can make the country better, strengthen the collapsing democratic structure and give the underprivileged their rights. We do not want an enmity with the government but when we come forth to demand our rights, fascist forces label us jihadi, anti-nationals, urban naxals, rioters and what not.

The fact is that the government is scared of anyone who asks questions, speaks about rights and struggles to demand them. Therefore, it finds ways to implicate us on fabricated charges and imprison us.

I was imprisoned for asking questions of the government and for struggling for my rights. My fellow protestors were also thrown behind bars for the same reason. As of now, three of us are out on bail. But many of us are still languishing in various prisons and we will continue our fight to have them released.

Our struggle for equal citizenship rights and our protests against the CAA and the NRC will continue. As soon as the pandemic subsides, we will once again come out on roads and continue our fight in the courts against these draconian laws.

Asif Iqbal Tanha is a student of Jamia Millia Islamia.