Two civilians died in the controversial Hyderpora encounter. Police's claim that one died in crossfire and another was involved with militants has met with outrage. 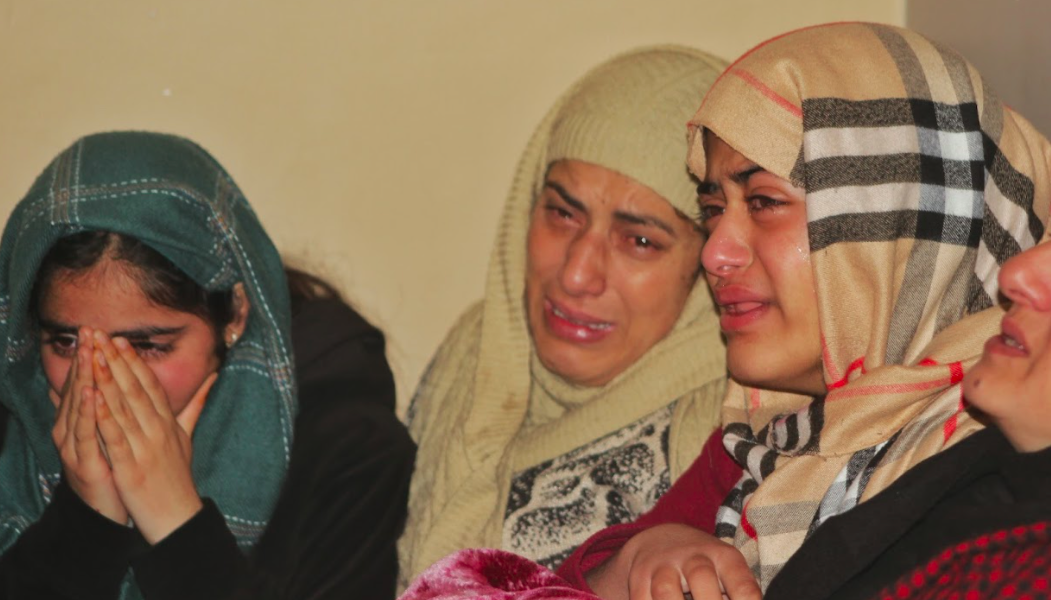 Relatives of Mohammad Altaf Bhat, one of the two civilians killed in the encounter. Photo: Faizan Mir

Srinagar: A controversial shootout that left two civilians dead has prompted outrage across Kashmir where the regional parties as well as the Hurriyat are demanding a judicial probe into the incident that took place in the capital of Srinagar on Monday, November 15.

The J&K Police have now set up a Special Investigations Team (SIT) to probe the shootout in which a doctor working as a land broker and a businessman were gunned down along with two suspected militants in Srinagar’s outskirts on Monday night.

Srinagar has lately recorded a dramatic spike in militant violence.

A senior police officer said the shootout took place in Srinagar’s Hyderpora locality on Monday, at around 6:30 pm, when a joint team of police, Army and paramilitary forces laid siege around a shopping complex following inputs on the presence of militants there.

In the ensuing firing, two suspected militants were killed. During a press conference on Tuesday, IG Vijay Kumar said one of the militants has been identified as Haider, a Pakistani national, while another reportedly hails from Jammu’s Banihal area.

Two civilians – Mohammad Altaf Bhat, the owner of the shopping complex, where the shootout took place, and Dr Mudasir Gul, a trained dental surgeon whose land brokerage office was housed in the complex – were also killed in the firing.

IG Kumar told reporters that Altaf was killed in “cross-fire” while Dr Mudasir was working as an associate of militants, a charge denied by his family who staged a protest at Srinagar’s Press Enclave on Tuesday morning and accused the security forces of killing him in “cold blood”.

“He was a doctor. He was not a terrorist. He returned home yesterday with chips and biscuits for his daughter. What crime had he committed? Why was he murdered like this?” said Yusra Bilal, a relative of Dr Mudasir, who is survived by parents, wife and 10-year-old daughter. 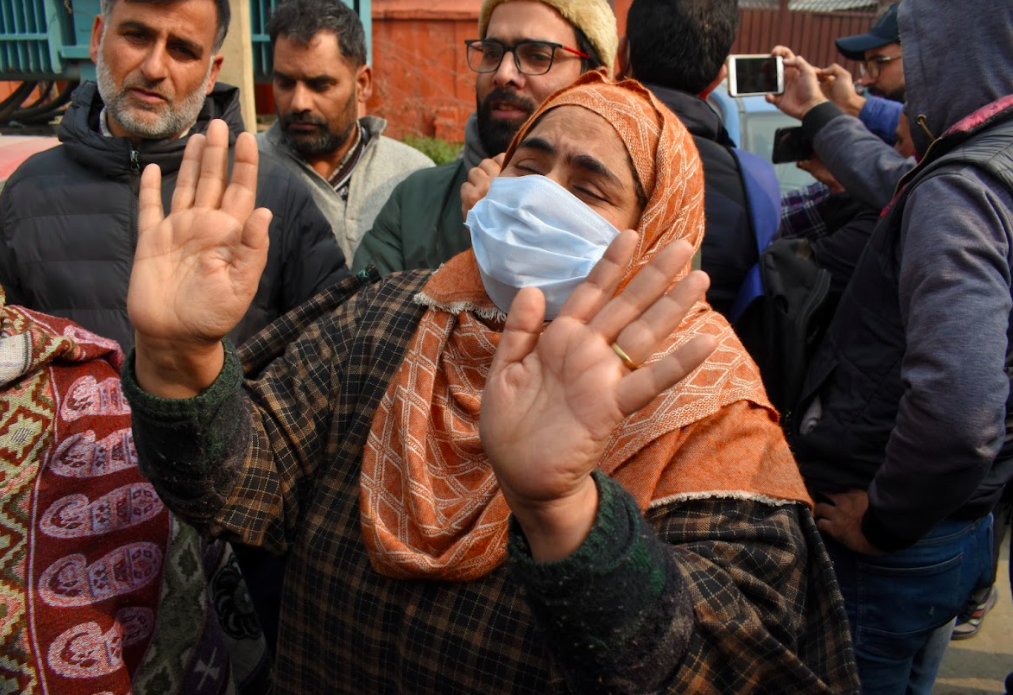 IG Kumar, however, claimed that Dr Mudasir had provided his rented space to the foreign militant, Haider, who was using it as a “hi-tech hideout.” The IG also claimed to have recovered some arms, mobile phones and several computers from the hideout.

“He (Mudasir) was harbouring militants and helped them in moving from South and North Kashmir areas (to Srinagar). He also helped Haider escape from the site of a recent attack in Srinagar in which a policeman was injured,” the IGP said.

Speaking with reporters at their residence in Srinagar, Altaf’s minor daughter said their family learnt about the tragic news at around 10 pm when their uncle, Abdul Majid Bhat, received a phone call.

“When we reached the shopping complex and I asked the policemen there how they got to know that my father was a militant, they started laughing unashamedly at me,” Altaf’s daughter said. The Wire is withholding her name as she is a minor.

“My brother is in Class 2. He was very attached to our father. What will we tell him? My mother is unable to stand on her feet. What was my father’s crime?” she said, accusing the police of using Altaf as a “human shield” during the search operation.

Majid, Altaf’s brother, told The Wire that his brother was asked to accompany security forces when they searched the shopping complex on Monday evening. “They came out as they didn’t find anyone inside the complex. After some time, the security men asked him to accompany them again. That is when the firing started,” he said.

“We want justice. If the police can prove that he had connections with militants, I am ready to face the gallows as well. But he was innocent. He has young kids. Who will take care of them?” asked Majid.

Altaf is survived by wife and three children, including two daughters. His family said he had been in the real estate business for the last 30 years. They believe that Dr Mudasir may have been killed because he was an eyewitness to what transpired inside the shopping complex when the firing broke out.

“My cousin was an eyewitness. Not a single shot was fired in retaliation (by militants). The doctor perhaps saw the murder of my father, so he too was martyred to cover up the crime,” Altaf’s daughter said.

Dr Mudasir had pursued BDS at a college in Bengaluru, according to his family. He has two kids.

The controversial shootout took place barely 24 hours after a J&K Police team was attacked by suspected militants in downtown Srinagar’s Nawa Kadal locality, injuring a constable whose condition is believed to be stable.

Families of Altaf and Dr Mudasir are demanding the authorities return their mortal remains so that they can perform their last rites. The shootout has sparked outrage across Kashmir. The wife (centre) of Mudasir Gul, a dentist who was killed in the Srinagar encounter. Photo: Faizan Mir.

Both the Hurriyat as well as regional parties such as Peoples Democratic Party, CPI(M) and Peoples Conference have demanded an “independent probe” into the circumstances that led to the killing of two civilians.

Slamming the authorities, moderate Hurriyat chief Mirwaiz Umar Farooq said the encounter underscores the “silence of international community and civil society in India in the face of acute violation of human rights by the state, has made the life of people living in Kashmir hell.”

“What makes this tragedy of impunity provided to the forces in J&K all the more heart wrenching, is that the family has since yesterday been pleading and protesting on the roads that at least the dead body of their loved one be returned to them for burial, which the authorities have ceased (sic),” he said in a statement.

CPI(M) general secretary M.Y. Tarigami said that the families of the civilians have been claiming that they are innocent and they have no connections with unlawful organisations. “Under the garb of upholding law, it seems the administration is abusing the law. A judicial inquiry must be ordered so that these families get answers to what happened to their loved ones,” he said.

“Using innocent civilians as human shields, getting them killed in cross firing and then conveniently labelling them as OGWs is part of GOIs rulebook now. Imperative that a credible judicial enquiry is done to bring out the truth & put an end to this rampant culture of impunity,” PDP chief Mehbooba Mufti said in a tweet.

National Conference’s Omar Abdullah tweeted, “An impartial & credible inquiry into the recent encounter in #Hyderpora is an absolute necessity. There are far too many questions being raised about the encounter & about the people killed. There have been numerous instances of fake encounters in the past and the questions raised about this #hyderporaencounter need to be answered swiftly & in a credible manner.”

Peoples Conference president Sajad Lone tweeted: “In the midst of conflicting claims in the Hyderpora encounter the least we deserve is a transparent description of what happened by a neutral institution. This is neither the first time nor the last time. Manoj Sinha- you have the opportunity to assert that human lives matter.”