You Cannot Hate Whom You Know: The Importance of Meeting Anti-CAA Protesters

It's easy to judge from a distance, but up close there can be no two ways about the fact that protesters at Jamia and Shaheen Bagh only want to counter hate with love. 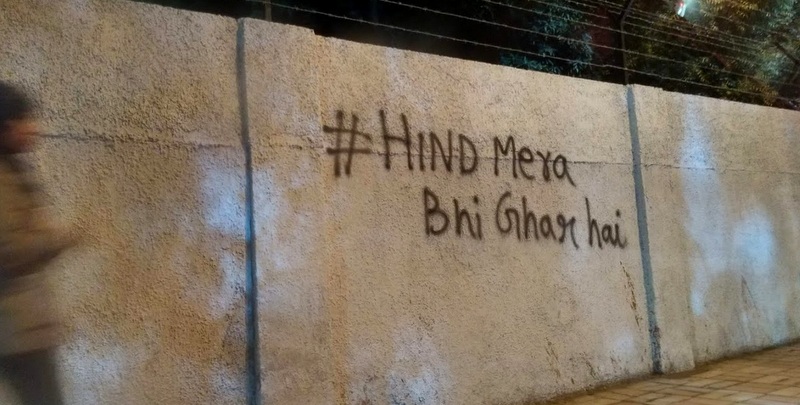 If there is anything I have seen the importance of over and over again these past five and a half years, it is that whenever the freedom, dignity and democratic rights of others are attacked and violence takes place, it is imperative to try to:

a) Physically meet those who have been affected

b) Help them in whichever way possible

It is easy to sit in the comfort of one’s living room, watch it all on TV, and offer lofty opinions on social media. It is quite another matter to actually visit the victims of the violence and show solidarity with them. It’s a choice I’ve been faced with time and again these past few years, and I’m afraid I haven’t always chosen well.

The news of the brutal attack on the students of Jamia Millia Islamia on December 14 and 15 shook me. And though I showed up at the ensuing protests at Jantar Mantar, I felt apprehensive about actually visiting the students of Jamia itself. But at times like these, I am glad I have friends whose concern for the victims of violence overrides my own inertia and hesitation.

One such friend took me to the protest taking place outside the university, and I am so grateful he did.

The first sight that caught my eye as we neared the protest site (after passing at least a hundred riot police in full gear) were the words spray painted on a wall, “#HindMeraBhiGharHai.” – ‘India is my home too’.

My friend, who is familiar with the university explained to me that these words had actually been spray painted on the wall months before the attack on Jamia.

“Obviously, someone sensed trouble was coming. Also, why would anyone say that unless they were being made to not feel at home in India?”

By the time we got to the university gates, the sun had set. To my surprise, young people were standing in the middle of the road, calmly directing traffic. 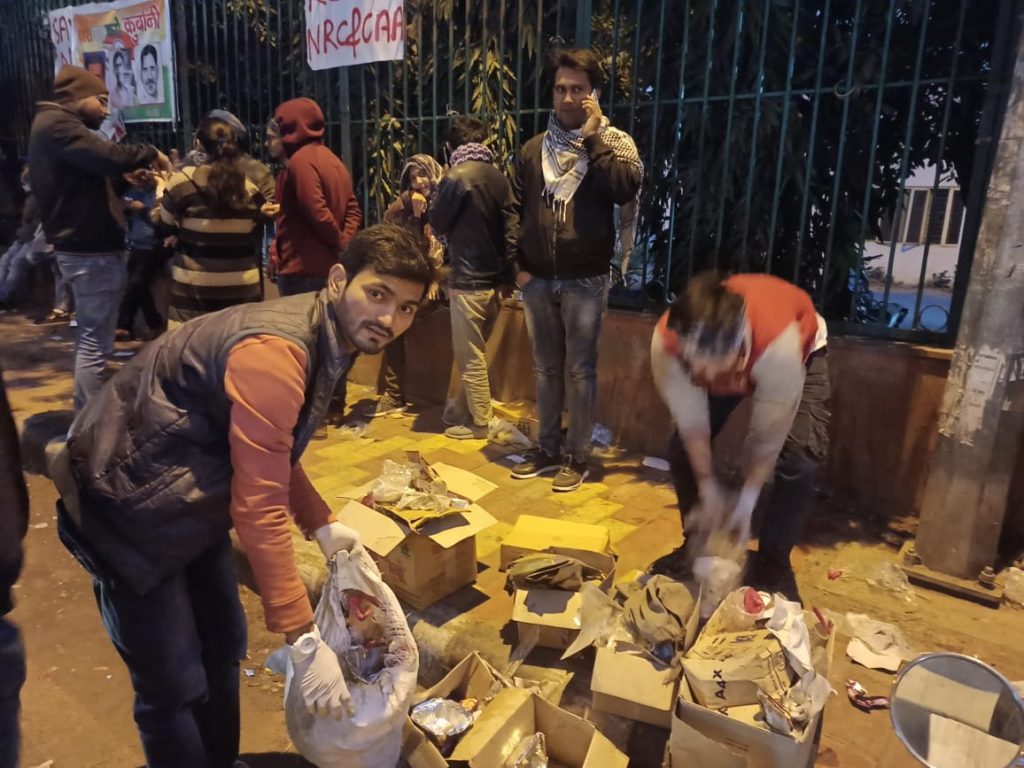 They were students from Jamia who had set up a makeshift divider of cardboard boxes and plastic rope in the middle of the road, ensuring that traffic kept moving despite half the road being occupied by peaceful protestors.

But what truly caught my attention was the sight of dozens of students sweeping the road and carrying away all the trash that had collected during the day in large cardboard boxes.

Thugs and goons don’t clean up after themselves. Conscientious, civic-minded citizens do.

We walked to Gate 7, which, we were told is the main hub of the protest and where notables like Umar Khalid and Kanhaiya Kumar have come and addressed the crowds. At this moment, though, people were dispersing. University students stood every few ten meters or so, exhorting everyone to please go home. One of the students there, a PhD scholar, explained to us, “The protest begins in the morning and winds up at six every evening. We don’t want protestors here at night because that’s when the goons can come in under cover of dark and create trouble. But tomorrow morning this place will be full again with thousands of protesters.”

The students we met and spoke to by the side of the road were polite and erudite. For someone who has been as viciously attacked by the state and the media as they have, these young people were remarkably calm and soft spoken. A passing group of students handed us pamphlets explaining in point form what the National Register of Citizens and the Citizenship Amendment Act are about.

One of these students suggested we also visit Shaheen Bagh a couple of kilometres away, where, he said, the residents of the area have been sitting on a ‘round-the-clock protest for several days now. I quickly WhatsApped someone who works in the media to check in about the wisdom of this idea.

“Be careful”, she responded. I appreciated the note of caution, of course, but how careful can one be in a situation like this? What is the line between prudence and cowardice?

We got into an e-rickshaw without functioning shock absorbers and wound through several lanes that got narrower and more crowded. Fifteen minutes later, we arrived. As if reading my mind, my friend cheerily told me, “It’s always this crowded here, by the way. This has nothing to do with the protests.”

We walked through a narrow lane and suddenly found ourselves looking out at a massive, halogen-lit gathering of at least four thousand people gathered around a makeshift stage. A Maulvi stood on the stage and asked the huge crowd to please join him as he sang:

The gathering sang along, many raising their cellphones with flashlights on, lighting up the night. My eyes filled up.

Here were four thousand Muslims singing about their love for India, despite being told to “go to Pakistan” over the last few years. 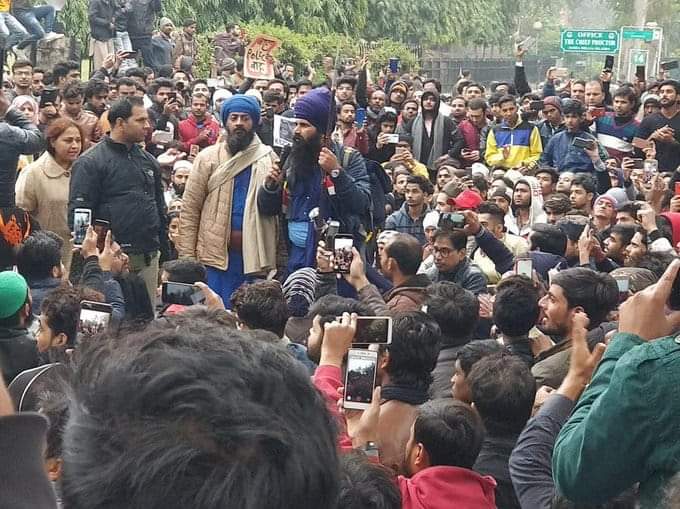 I thought about Mohammed Akhlaq, Pehlu Khan and young Junaid, and also about those like the eight year old child who have been killed over the last few days in Uttar Pradesh.

A student I was standing next to explained to me how the residents of Shaheen Bagh along with groups of Jamia students sit around bonfires and sing songs of mohabbat through the night.

“Songs of mohabbat?” I asked.

“Yes, it keeps the hate away,” he explained.

The state wants to disenfranchise Indians who sing songs of mohabbat to keep the hate away?

A little distance away, smoke rose from a makeshift chulha on which a group of young men prepared food for those in the gathering.

“We should eat,” my friend said and suggested we go to a small restaurant nearby. There, other students both from Jamia and Aligarh Muslim University joined us and shared stories of what it’s like to be a Muslim in India nowadays.

We were also joined by Faisal, the 18-year old who had became an overnight internet sensation, by virtue of being the young man caught on camera for cleaning up the road outside Jamia. I asked young Faisal how it felt to be interviewed by the foreign media for his contribution to swachh bharat. He told me it was a bit embarrassing to get all that attention for doing what he considered was a very normal thing, but what he really couldn’t understand was all the online hate he has received for trying to keep his part of the city clean.

“People troll me and accuse me of staging a photo-op,” he said. “They tell me I spread the dirt there and then cleaned it up.” Everyone at the table laughed. The absurd seems to have become the norm in Modi’s India. May as well laugh at it.

The meal ended, and my friend asked the server to please pack up the dishes we hadn’t been able to finish. He then went out into the night and gave the food to a child huddled in the doorway.

I have studied the psychology of hate, even the neuroscience of it, but I will be honest.

At a deeper, visceral level, I still do not understand communal hatred and the ease with which so many hate those they don’t even know. Perhaps the wise words of Rajmohan Gandhi, the Mahatma’s grandson, hold a clue here:

Perhaps it really is just that simple. Perhaps if we can truly get to know those we have been taught to hate and call ‘the other’, (like the students of JNU, AMU and Jamia, and let’s just face it, Muslims in general) then I daresay the hate will fall away and all we will be left with will be love, fondness and admiration for each other.

And then, perhaps, the great nation of India will finally be able to heal.