A Reminder That People Do Not Dissolve, Governments Do

Citizenship is not only about our status as a holder of rights, it is about membership of a political community.

In 1953, the working class rose in protest against the government in East Germany. And the celebrated poet and dramatist Bertolt Brecht wrote his famously satirical poem: “Stating that the people/Had forfeited the confidence of the government/And could win it back only/ By redoubled effort. Would it not be easier/In that case for the government/To dissolve the people/And elect another?”

We know that only poets can explore the depths of the human condition to tell us stories of betrayal. A government that has lost the confidence of the people will have to work overtime to regain it, suggested Brecht. It might prefer to dissolve the people and elect another. It is not easy to read an ironical poem or piece of literature. We have to learn to read between the lines. Only then does the political message of the poet imprint itself on our consciousness.

The ‘people’ is, of course, not a quantifiable demographic category. It is a political one; it refers to citizens who can influence public opinion either in favour of, or against the government. For authoritarian states the latter category has to be rendered irrelevant, and the former category has to be catapulted to the centre of the political arena. For instance, on August 5, 2019, the ‘people’ in Jammu and Kashmir were not dissolved. Leaders, their followers and collective political commitments were declared to be of no significance. They were thrown metaphorically into the wilderness of political nothingness. The Central government invented a political party and a political category called the people out of its supporters. People who disagreed continue to be subjected to a lockdown.

Also read: In the Middle of Modi’s UAPA Dragnet, a Wedding, and Some Fighting Spirit

Subsequently, another section of our people was marked out for irrelevance by the introduction of religion into citizenship qualifications. Most of us kept silent and watched the unfolding scene quietly. But in December 2019 our students showed us how to reclaim citizenship rights that have been hijacked by the Citizenship (Amendment) Act. The outbreak of COVID-19 put a (temporary) end to enormously innovative protests. Politics as the right to challenge the power elite was muzzled by the lockdown. For the government, the lockdown has proved one of the most profitable modes of controlling recalcitrant populations, and gagging protests.

Into the political vacuum stepped the coercive arm of the Indian state: the police, the National Intelligence Agency, and the Central Bureau of Investigation among others. These agencies were galvanised to stalk and harass university students. The Central government has declared war on its own young people! India’s prisons, some of which had been emptied out for health reasons, have now been filled with university students and political activists. The state refuses to extend the right to preventive health to dissidents. They are placed outside the pale of an activity called politics, and outside the ambit of civil liberties and political rights. They are also simply banished from the sphere of humanity. This is not the way a democratic government should be treating citizens even if they have dared to question the might of the current leadership.

And now comes the twist in the tale. Students/activists are not being charged with dissent, they face allegations that they incited and fomented communal discord, and that they participated in communal riots that devastated North East Delhi in February 2020.

It is perhaps time to distinguish between two political moments. From December 2019 to March 2020 Delhi was rocked by two sorts of political mobilisations. From December 15 students, citizens and activists came together in politically imaginative ways to reclaim and protect their constitutional rights and that of their fellow citizens. February 2020 witnessed a different kind of political activity. Ugly incendiary speeches and calls to kill heralded the onset of a terrible communal riot.

What could be the link between the two mobilisations? The first one demonstrated the virtue of solidarity with fellow citizens, rejected paper citizenship, and enacted the rituals of performative citizenship. The second political moment branded the perfectly legitimate right of protest as traitorous, and mandated that ‘traitors’ be killed, which they were.

Anyone who knows a little about democracy knows that only this form of government respects the political competence of the public. Citizens have the right to hold a government they have elected accountable. Democracy is not only about majority rule. The majority principle is workable; it is hardly ethical. Democracy recognises the right of every citizen to participate in the making of decisions that affect her and her fellow citizens. That is why democracies encourage civil society as a sphere of associational life.

We know that our wellbeing is dependent upon the wellbeing of our fellow citizens. We cannot be free unless our community is free. This was the lesson of the freedom struggle, and this is the lesson India must re-learn. Freedom is an indivisible good, I cannot be free at the expense of others. And on a more instrumental note, I cannot be free for long if my neighbours are denied this right. Tomorrow will be my turn. 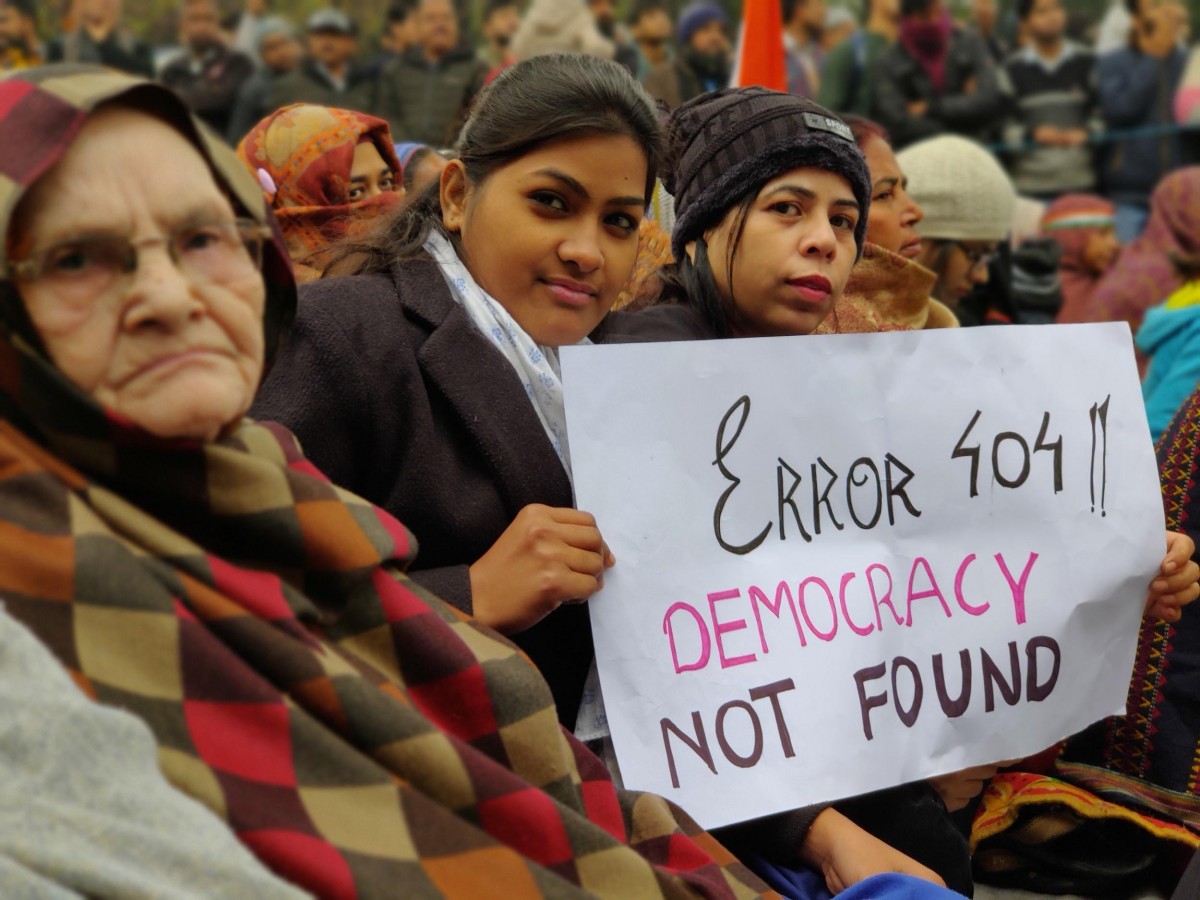 Moreover, I am free only when I have the choice to say yes or no. Integral to citizenship is the right to reflect, evaluate, and affirm or reject state policy. Our capacity to analyse, critique and propose alternatives to contested policy gives us agency, makes us the author of own lives, and endows us with the capacity to be the script writer of our own stories. Imagine a society in which everyone nods in acquiescence when the ruling elite speaks. Imagine a society in which no one addresses or speaks back to power. How dull; how unimaginative will that society be! History tells us that no society degenerates if its members dissent. It comes alive, it acquires vibrancy, it enables agency. But societies wither the moment members are coerced to agree with power holders.

Though individual acts of dissent are significant, they are not enough. People have to come together in a wide-ranging movement to protest against injustice. Gandhi showed us how to inspire millions of people to participate in civil disobedience campaigns against laws that are palpably unfair, clearly unjust, and demonstrably discriminatory. Indians not only mobilised to challenge laws; they did so in palpably creative ways such as breaking the salt law.

The movement to reclaim the right of citizenship that erupted in December 2019 tapped political imaginations precisely because of the creativity and the political imagination of the protestors. These protests have thrown up issues that are worth reflecting on. Citizenship authorises us to benefit from the services offered by the state – passports, education, health, housing, post-retirement benefits, the right to travel, the right to employment and above all the right to vote. Citizenship embodies a democratic relationship between the state and its citizens.

But citizens of a political community also owe each other obligations of justice and solidarity against state repression. Citizenship, our young people reminded us, is not only about our status as a holder of rights, it is about membership of a political community. It is a relational concept that establishes a bond based not on kinship or blood but on the fact that we are members of a civic community defined by a constitution.

The Constitution is the anchor of our identity, the protector of our rights, our legacy and our culture. The occupation of public spaces, sit-downs on public roads, coinage of innovative slogans, and art works, proclaimed and enacted popular sovereignty. Despite the bloodletting in Delhi, these protests continue to challenge and interrogate the power of the ruling classes. The entire concept of paper citizenship disseminated by the government of India has been derailed, destabilised and rendered insecure. What we see today is citizenship as performance.

The rulers declare that the Citizenship (Amendment) Act will not take away citizenship from anyone. But as our young people recognised, provisions of the Act will set the ground for further disenfranchisement of those who have lived and worked in India since birth, who possess rights as full citizens, who own the Constitution and the national flag, and who are citizens of India by virtue of membership of a territorially grounded political community. We owe solidarity to fellow citizens who may be stripped of full citizenship rights, deprived of the right to live and work in a location of their choice, deprived of the right to have rights to protest, to assemble peacefully and without arms, and to share equally in the burdens and the benefits that a society has to offer.

These protests do not ask for the grant of new rights of citizenship. Protestors reassert their right as citizens to hold an elected government accountable for acts that harm those who voted them into power. They demonstrate that the people of India will not accept any act that might deprive them or their fellow-citizens of their rights in the near future or ever. They have reclaimed their basic Constitutional rights.

In the process an important issue has been thrown up onto the political agenda. We have to, once again, articulate our relationship to the state and obligations to fellow-citizens in the civic language of constitutional rights. We have to dismiss the implications of the CAA that India is a natural homeland for all Hindus wherever they live. The belief is dangerous; it will further divide the country, whereas civic citizenship will unite us. We have to reinstate periodically our obligation to vulnerable citizens in the vocabulary of solidarity. We have to insist that civic obligations are grounded in the place we live, in common memories, and in the experience of sharing equally the benefits and the burdens of a society.

The notion of civic citizenship critiques the distinction between citizens on religious grounds as illegitimate and as undemocratic. It informs us that there is need to repeatedly side with our compatriots in the struggle against hierarchies and marginalisation.

Till now, Bharatiya Janata Party leaders declared through words and deeds that any sort of dissent will not be tolerated, and whoever disagrees with the government will be charged with sedition. From mid-December to February citizens told the government that the corruption of citizenship by the introduction of religious criterion is not acceptable. Protestors proclaimed that the right to citizenship is ours by reason of birth, by reasons of belonging, by reasons of fidelity, by reasons of solidarity with fellow citizens, and for the simple reason that we bow their heads before the national flag and stand up in reverence when the national anthem is sung.

In the face of mass protests that caught the imagination of the world, aspirant leaders of the ruling ideology might have decided to divert attention to communal issues. The strategy is predictable and deadly. And then the pandemic struck. Politics went underground and the coercive arm of the state apparatus found an opportunity to punish leaders of a movement that demanded nothing but the reclamation of a right already granted.

The government has tried to dissolve that very section that is politically significant. But people do not dissolve except in moments of poetic irony, governments do. It is time for our ruling elites to recollect that in East Germany it was not the people but the government that was dissolved by the fall of the Berlin Wall.