'There Is No Going Back': Women Lead Shaheen Bagh-Style Protest in UP's Deoband

The protest, led primarily by Muslim women, has entered its 11th day. It has grown phenomenally, with several supporters from outside Deoband joining in.

Women at the anti-CAA protest in Deoband. Photo: Sukanya Shantha

Deoband (Saharanpur, Uttar Pradesh): When the women of Shaheen Bagh began to organise themselves in mid December, another group of women over 160 km away – in the renowned Islamic seminary of Deoband in Uttar Pradesh’s Saharanpur district – had begun to feel restless.

They were looking up to their political representatives, religious heads, the Darul Uloom and even men in their community to take the lead and respond to the growing unrest against the newly passed Citizenship (Amendment) Act (CAA), and two other imminent countrywide exercises, the National Register of Citizens (NRC) and the National Population Register (NPR). When no one was ready to lead, the women decided to take things into their own hands.

Beginning with only four people, in a matter of just 11 days the sit-in protest at Idgah ground has grown multifold and over a thousand women from the town have joined in. Several others keep pouring in each day to express their solidarity. Women, wrapped in thick layers of jackets and scarfs, are huddled under a blue tent. This January has been particularly a cold and harsh one, with surprise rainfall on some days during the protest.

A young, burkha-clad Fozia Usmani was among the first ones to have ignited the fire of resistance among the women of Deoband. “Resistance was building across the country. People who have always remained on the periphery were leading the movement against the Centre’s decision to pass these inhuman laws. I wanted to be a part of this historical human resistance, but did not quite know how to go about it,” Fozia, a political sciences student, told The Wire. But when Fozia reached out to other women in the town, she says the eagerness was infectious. Not just the Muslim women, but several women from Bahujan castes have also joined the protest.

For media coordination and other official statements to ensure the movement is not misunderstood, Amna Roshi has been appointed as the director, Fozia as the deputy director, Iram Usmani as the secretary and Salma Ahsan as the deputy secretary. They have also named their initiative the ‘Murtahida Khawatin Committee’ (MKC), which loosely translates to ‘women’s unity committee’.

On the 11th day, a full-blown protest, styled on the lines of the Shaheen Bagh protest in Delhi, is on its way to make history. “Women were ready to breakout of their conventional roles and be a part of the caravan,” Iram says. 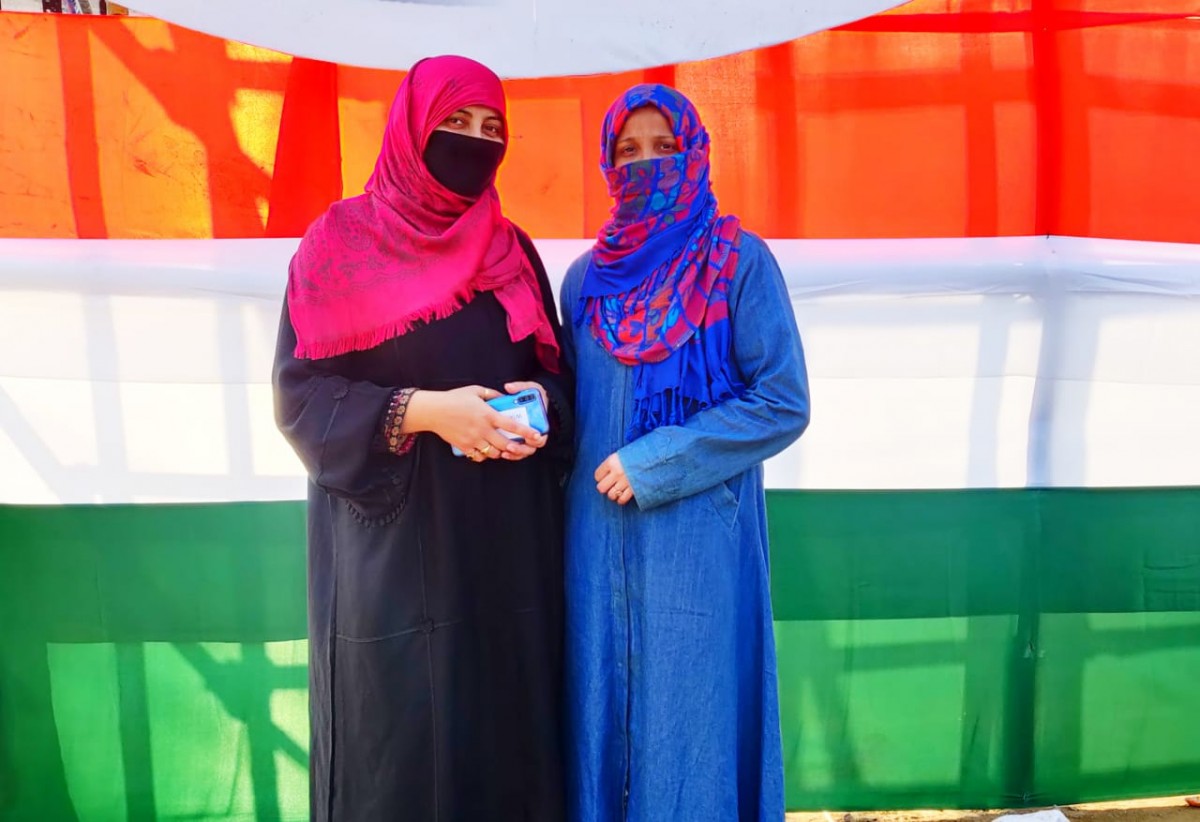 The process of building resistance in Deoband was an organic one, just the way it took shape in other parts of the country. But the four initiators of the movement here have somewhat assumed the role of leaders – a tag they resist univocally. “No one is a leader here, we are rather an ever-growing team,” Iram weighs in.

In fact, Iram is right. Every participant here is enthusiastic to tell her story. Older women, young mothers, school girls here say they are fighting a “kaala kanoon (black law)”.

Young Asma, barely in her teens, has been attending the protest rally since day 1. She takes a break of five hours to attend school and returns to the ground soon after. She sits here in her school uniform, a sky blue kameez and white pyjama, and peppers it with a black ribbon, strapped around her forehead. Asma is the loudest of the protestors when the sloganeering begins. “CAA nahi aane denge, kaagaz nahi bataayenge (We won’t allow CAA to be implemented. We won’t show our papers),” she announces.

The constant fear of misinterpretation

Although organic and impromptu, the organisers have been mindful of not allowing any political posters to crop up and overtake their struggle. The tent has photos of only anti-caste leaders like Dr B.R. Ambedkar, Jotiba Phule, Savitibai Phule and Fatima Shaikh. One life-size picture of M.K. Gandhi adorns the outer space of the tent. A large cutout of the Indian map and the national flag are displayed outside the tent, where women take turns to pose for pictures. The chances of misreporting and the Bharatiya Janata Party-led government both in the state and the Centre meddling with the discourse is very high, the women are aware, and they want to keep close tabs on how perception is built.

Iram says the understanding has improved phenomenally since they first began. “Women would sleep off as we began discussing these laws in their pure, legal forms. Then we started breaking down the various aspects, connecting them with their lived realities and the losses they would have to suffer if these fundamentally flawed laws were implemented. This way, women understood the issue well and were more willing to be a part of the movement,” she says.

Seventy-year-old Tahera, a fervent participant of the protest, says this is a momentous time and it is her fight for her ‘wajood (existence)’. “The time I was born, documents were not needed to prove our identity. But in such a ripe age, the government wants me to get my documents and prove my identity. The attempt is to push us to the margins further,” she says. She then goes on to explain the differences in the CAA, NRC and NPR, and how each of them has a severe bearing on the lives of the marginalised. “And Muslim women, who have never stepped out of their homes and seen the world only through their purdahs, would be one of the worst affected,” she adds.

While those leading the protest got involved with the full backing of their families, several others that The Wire talked to shared their multiple struggles. “While my husband and in-laws have largely been supportive, I have been over- worked, handling both domestic chores and participating in the protest. But I am determined, there is no going back,” Muskaan shares. She has been sitting in at the protest every evening for over five hours since the first day. 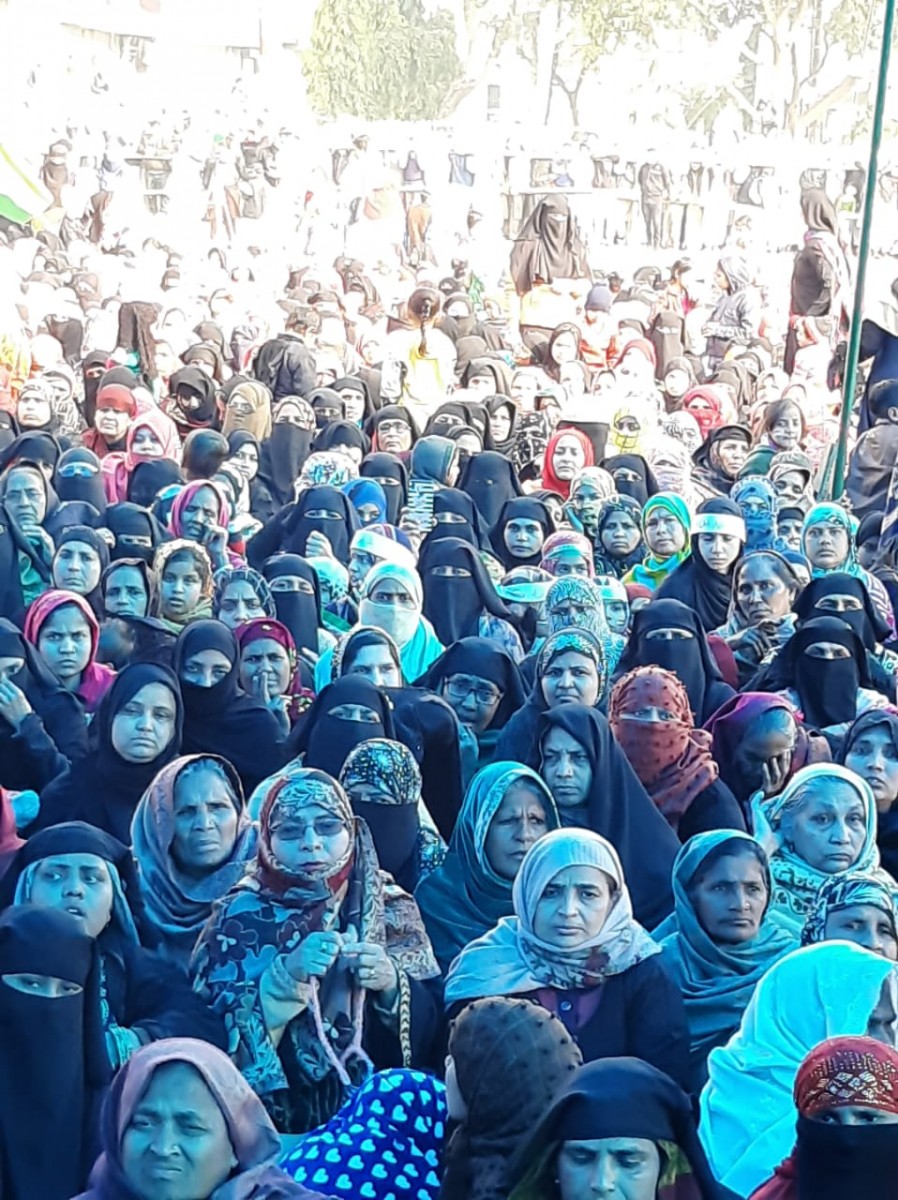 Women at the anti-CAA protest in Deoband. Photo: Sukanya Shantha

The anti-CAA protests saw the most violent pushback in Uttar Pradesh. The state police resorted to extreme measures, killing at least 23 persons in December. Of them, all were Muslims and most belonged to lower caste or Pasmanda communities. In Deoband too, the women are worried that that the state will react sooner or later. “Our purdahs won’t save us for long,” Iram says, laughingly. The anxiety is palpable at Idgah ground. Most women don’t want their educational backgrounds, their professional work and family names mentioned. “Yogi sarkar hai, kuch bhi kar sakti hai (The Adityanath government could do anything),” one of them says.

The protest ground, right from the beginning, allows only women’s participation and entry into the tent is restricted only for women protestors and speakers. Men, however, have willingly accepted roles of foot soldiers, handling the logistics and also staying vigil as women lead on. Mohamad Mustafa, a farmer whose family’s women and children have been sitting at the protest, met this reporter at the Murtahida Khawatin Committee centre set up only recently, just outside the Idgah ground.

Mustafa says he spends most of his time at the centre providing help as and when needed. “The women of Deoband are doing the unbelievable. They are showing us the way, the least we can do is extend our support,” Mustafa says, as he moves back to arranging for water packets for the women at the protest tent.

Yogi government and the Darul Uloom

In December last year, Darul Uloom had advised its students to stay away from protests which it felt may “tarnish the image of the seminary”. But that did not dissuade the women here. As the protest grew, many political leaders, including from the Congress, Bahujan Samaj Party and Samajwadi Party, have extended their support to the cause. Saharanpur born anti-caste movement Bhim Army has also extended its support. “This support has added impetus to our struggle,” Fozia says. 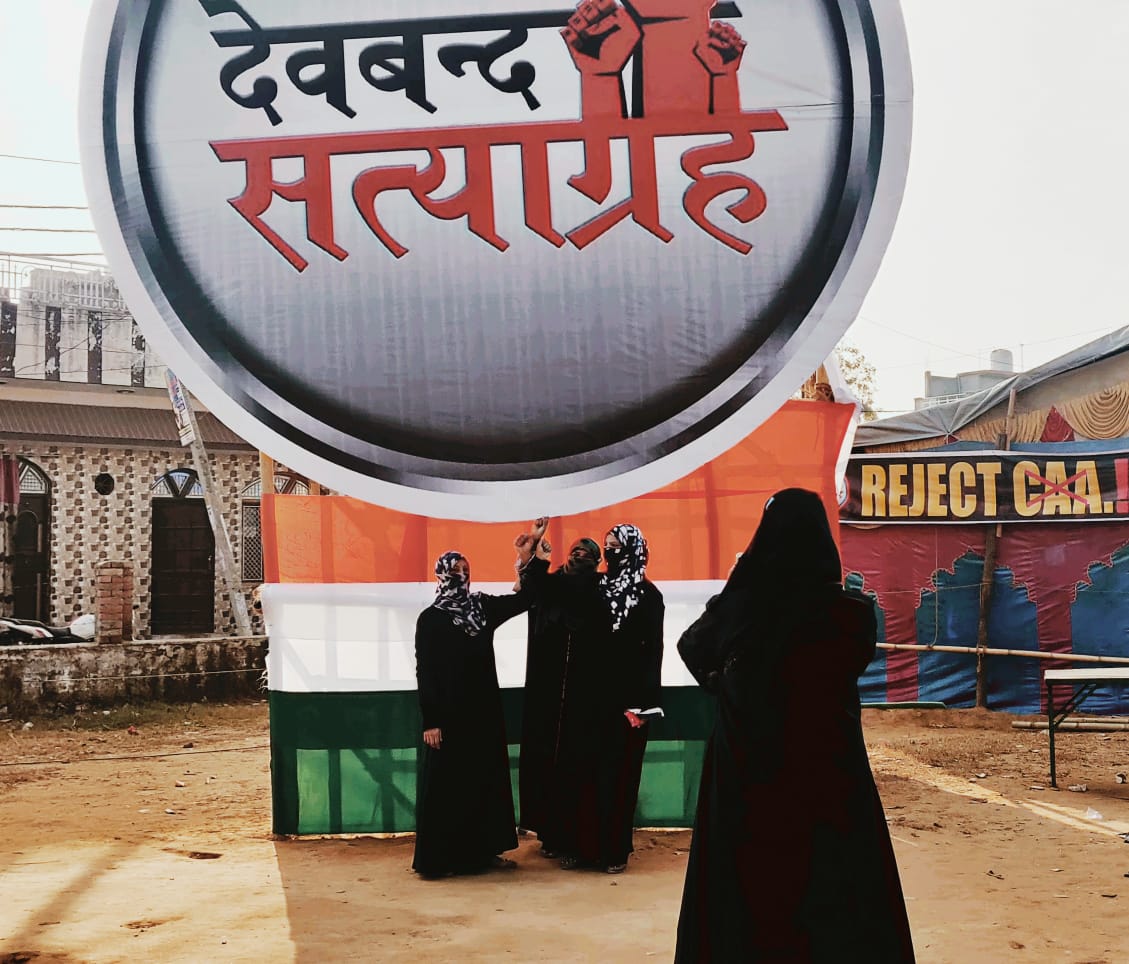 The Uttar Pradesh police have been pressuring the women every day to end their protest. The district administration has offered options like “protests in regular intervals”, which the protesting women says is only an attempt to weaken their movement. But the women are not giving any room for negotiations. “This law has already killed enough and caused enough destruction; we won’t allow anything dilute our resistance,” Iram announces.