A protester has died in police firing at Telangana's Secunderabad. A total of 260 people were arrested and six FIRs lodged in Uttar Pradesh in connection with the protests. 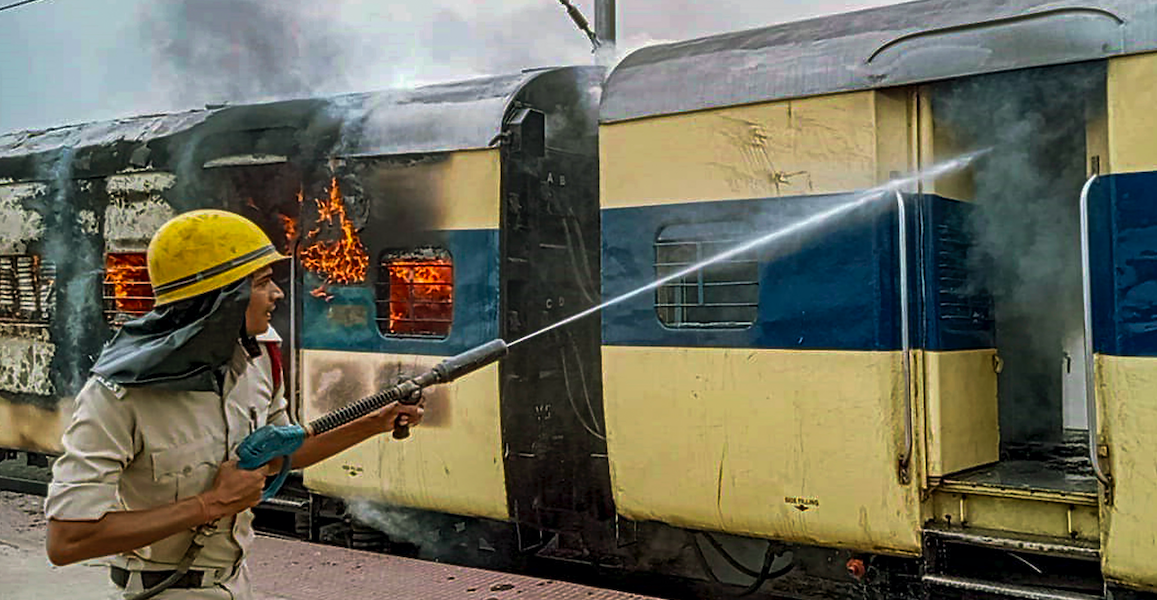 A firefighter tries to douse a fire in a train, set by people protesting against Centres Agnipath scheme, at Kulharia railway station, in Bhojpur, June 17, 2022. Photo: PTI

New Delhi: Across states, protests have continued to rage against the Union government’s Agnipath defence recruitment scheme, in spite of the Union home ministry announcing the reservation of 10% vacancies for recruitment in Central Armed Police Forces and Assam Rifles for Agniveers who will be discharged after four years.

The MHA also announced on Twitter an age relaxation for Agniveers for recruitment in the CAPFs and Assam Rifles.

These announcements have so far done little to quell protests. The Railways cancelled 234 trains while 340 trains have been affected due to the agitation.

Defence Minister Rajnath Singh, meanwhile, held a meeting with the top brass of the Army, Navy and the Air Force on the overall situation.

A public interest litigation has been filed in the SupremeCourt seeking a Special Investigation Team (SIT) enquiry into the mass violence and damage to public properties caused during the protests, LiveLaw has reported.

Congress leader Rahul Gandhi has said that just as Prime Minister Narendra Modi had to withdraw the farm laws, he will have to accept the demand of the youth and rollback the Agnipath defence recruitment scheme.

A 24 year-old man, D. Rakesh, died and several were injured after security personnel opened fire on hundreds of agitators at the Secunderabad railway station on Friday.

Rakesh, an Army aspirant from Dabeerpet village in Warangal district, is the first to person to have died in the violent protests which have swept across the country since Wednesday.

The incident led to a war of words between the ruling TRS in Telangana and the opposition BJP, with Chief Minister K Chandrasekhar Rao blaming the “faulty procedures” of the Union government for the death of Rakesh.

Expressing shock and sympathy over the death of the man, Rao announced Ra 25 lakh ex-gratia to the kin of the deceased, an official release said. He also announced government job to a family member as per qualifications.

With the railway station witnessing violent scenes with the number of protesters swelling from around 300 in the morning to about 2,000 later and the mob indulging in violence and arson where train coaches were targeted, passengers ran helter-skelter, even leaving behind their possessions inside trains, Government Railway Police (GRP) officials said.

The agitators allegedly advanced towards the loco engines, filled with oil, to set them on fire.

“The protesters started to set on fire things, besides continuously pelting stones on police personnel. The police were unable to reach them due to heavy stone pelting,” GRP officials claimed, justifying the use of firearms.

Officials said eight police personnel and a driver of a privately-run bus suffered injuries in violence during the protest in Jewar area of the district, adjoining Delhi in western Uttar Pradesh.

The movement through Jewar toll plaza between Greater Noida and Mathura-Agra was blocked for a while. Police Commissioner Alok Singh said in a statement around 1.30 pm that no highway in Noida or Greater Noida was closed due to the protests and vehicular movement was normal across Gautam Buddh Nagar.

Later in the evening, the police said in a statement that it has arrested 10 people and lodged an FIR against 225 people in connection with the protests that obstructed vehicular movement during the day.

The number of arrests was later updated to 15, according to Uttar Pradesh ADG (Law and Order) Prashant Kumar.

“The road was blocked by some chaotic elements, protesting in unison and pelting stones. A private bus parked on the road was vandalized, eight policemen and a bus driver were injured in the incident after which the FIR was lodged at the local Jewar police station,” the local police said in the statement.

Of those accused, 75 are named and 225 unnamed, the police said.

Charges under the Criminal Law Amendment Act, 1932 have also been invoked in the FIR, according to the statement.

A total of 260 people were arrested and six FIRs lodged until Friday in Uttar Pradesh in connection with the protests.

According to information provided by ADG Kumar, the FIRs were lodged in Firozabad, Aligarh, Varanasi, and Gautam Buddh Nagar (1) districts.

Acting on the FIRs, 260 people were arrested by police from five districts. 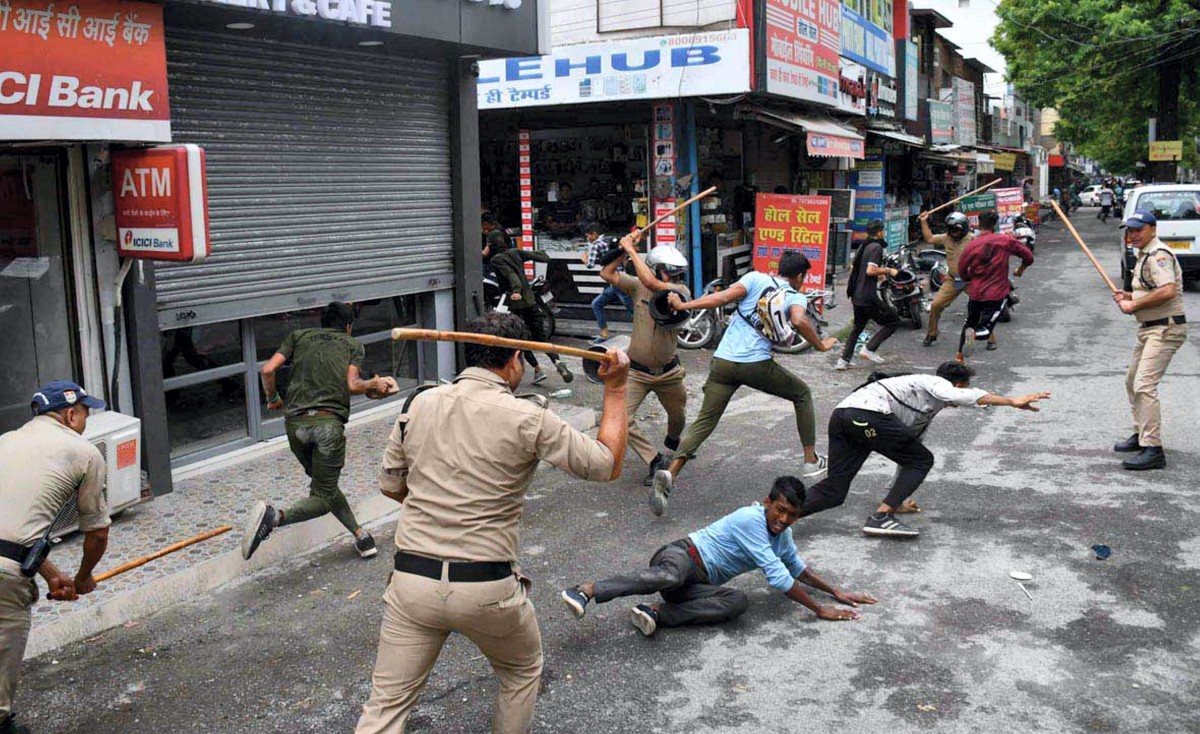 In Bharatpur, hundreds of youths blocked the Agra-Bandikui railway track.

“Stones were pelted at policemen. One policeman was injured. We had to fire tear gas shells to disperse the mob. Situation is now under control,” Bharatpur Superintendent of Police Shyam Singh said.

In Alwar, the windshield of a police car was damaged in stone pelting while in Chittorgarh, a protest was held at the district collector’s office. The protesters then moved towards a railway station nearby where they damaged railway property and pelted stones at police personnel.

In Kota and Jaipur, rallies were taken out by protesters.

Scores of defence job aspirants led by the Rashtriya Loktantrik Party (RLP) had staged protests in several parts of the state on Thursday too.

Jasol termed the scheme a “mess”. “This move is only aimed at doing away with the pension in the service,” said Jasol.

Note: This report is being updated as more news breaks on the protests and the government and opposition’s responses.