The victims were travelling in an auto-rickshaw on which the power cable fell. 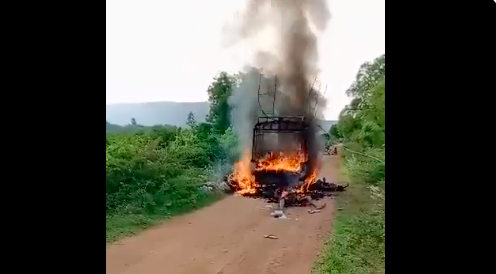 A screengrab from a video showing the autorickshaw on fire in Andhra Pradesh.

Amaravati: Five farm workers were charred to death and two others injured when a high-tension power supply cable snapped and fell on the autorickshaw they were travelling in, resulting in a major fire, in Satya Sai district of Andhra Pradesh on Thursday morning.

The victims were said to be related to each other.

A squirrel climbed on to the electrical pole, causing a short circuit of the wire and the cross-arm. “This led to the snapping of the high-tension cable,” AP Southern Power Distribution Company Chairman and Managing Director Haranadh said.

Deputy Superintendent of Police, Dharmavaram, Ramakanth said over phone that five other persons, including the auto driver, jumped out to safety after the fire.

The two injured persons were shifted to hospitals in Dharmavaram and Anantapuramu for treatment.

Tragedy near Chillakondaiah Palli, Tadimarri Mandal of Sri Satya Sai dist. 8 persons were burnt alive when the vehicle they were travelling came in contact with high tension electric wires. The deceased were identified as residents of Guddampalli. pic.twitter.com/dY5xq6mUP4

“A farmer engaged the workers for work in his field and they were proceeding to the nearby village in a seven-seater auto. Suddenly, a high-tension overhead electricity cable snapped and fell on the auto, where there was an iron cot on the top, and caused the fire,” Ramakanth said.

While about six persons, including the driver, managed to jump out, the others were trapped inside the auto as the fire raged.

Five women in their mid-thirties were charred to death while two more sustained severe burns.

The DSP said further investigation into the case was continuing.

The Chief Minister announced an ex-gratia payment of Rs 10 lakh each to the kin of the deceased.

The SPDCL CMD said a technical committee was probing the cause of the accident and a vigilance committee would also conduct an inquiry.

“We are announcing an ex gratia relief of Rs 5 lakh each to the kin of the deceased and Rs 2 lakh each to the injured persons. We will take all steps to ensure such incidents do not recur,” the CMD added.