Both activists, accused in the Bhima Koregaon case, had surrendered today. 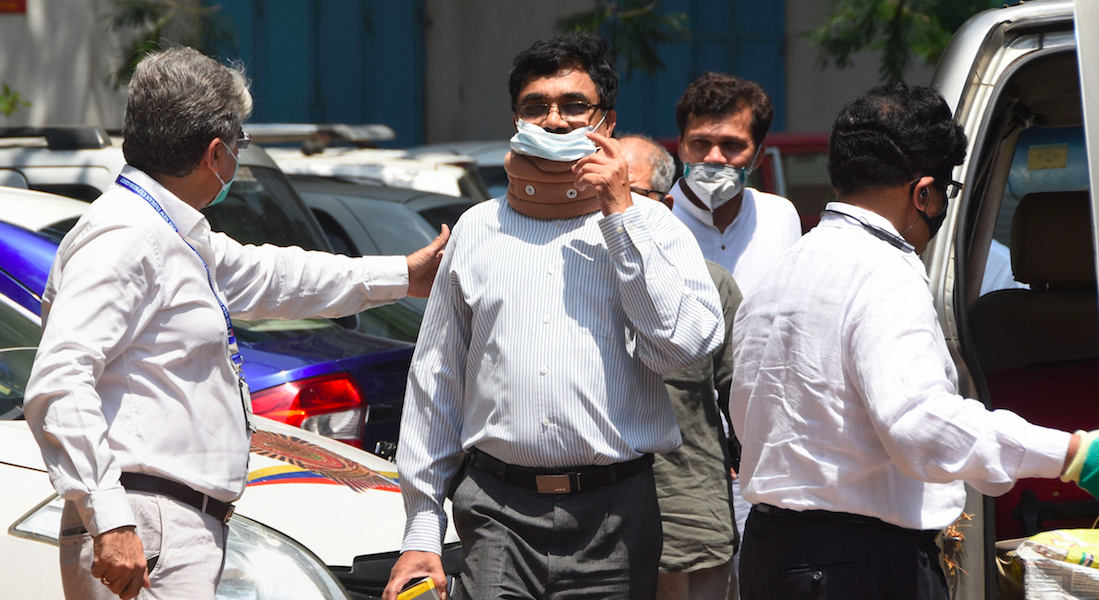 Mumbai: With the protection from arrest provided to them by the Supreme Court in the Bhima Koregaon case for nearly two years having finally ended, civil rights activist and academic Anand Teltumbde and journalist-activist Gautam Navlakha surrendered before the National Investigation Agency on Tuesday, April 14.

Both have been booked under the Unlawful Activities (Prevention) Act, which bail is very difficult to secure.

Navlakha was taken into NIA custody and will be produced before the NIA court through video conference tomorrow, his lawyer Nitya Ramakrishnan told The Wire.

Teltumbde, who has been staying at Rajgruha (B.R. Ambedkar’s house) in Mumbai along with his wife Rama for the past month, surrendered at around 1:30 pm before the NIA office at Peddar Road in south Mumbai. He was produced at a special NIA court which has sent him to NIA custody until April 18.

Teltumbde was accompanied by his wife Rama Teltumbde, and his brother-in-law and senior anti-caste leader, Prakash Ambedkar. The scholar who suffers from acute cervical spondylitis wore a cervical collar and a mask – made compulsory at the time of the COVID-19 pandemic by the Maharashtra government. He appeared composed.

The trio was seen entering the NIA office together. Later, at around 4 pm, Teltumbde was produced before the special NIA court at Kala Ghoda.

Teltumbde is B.R. Ambedkar’s grandson-in-law and the irony of his arrest on the Dalit icon’s birth anniversary has  not gone unnoticed..

The Pune police had tried to arrest Teltumbde from Mumbai airport on February 2, 2019, despite the Supreme Court declaring in January 2019 that the scholar could not be arrested for four weeks – till at least February 11. Holding that the arrest was “illegal” and amounted to contempt of the Supreme Court, a Pune sessions court had ordered his immediate release.

Teltumbde then secured protection from arrest, first from the lower judiciary and then the Supreme Court.

Last week, the Supreme Court, however, asked him and  Navlakha to surrender within a week’s time. The court refused to entertain Teltumbde and Navlakha’s pleas that they were aged and thus at risk in prisons at the time of the COVID-19 pandemic.

Navlakha, who lives in Delhi, visited the NIA office on Tuesday at around the same time as Teltumbde. He will be taken into custody tomorrow, an NIA official said.

Claiming that Teltumbde was in contact with the arrested accused in the Bhima Koregaon case “over the phone” and was present at the place of offence at the “relevant period,” the NIA sought his custody for 10 days.

The NIA has held that the persons arrested earlier and Teltumbde were part of the Elgar Parishad, an event that was organised at Shaniwarwada in Pune on December 31, 2017. According to the agency, at this event, a conspiracy was hatched to gather at Bhima Koregaon, 30 kilometres from Pune on January 1.

While the police have accused these activists, most of them prominent scholars and activists, of instigating the gathering and the subsequent mob violence, and also plotting to assassinate Prime Minister Narendra Modi, in reality it was the Dalits and Bahujans visiting the spot who were brutally attacked by a Hindutva group. According to the victims, two Brahmin Hindutva leaders, Milind Ekbote and Manohar Bhide, were allegedly the masterminds behind the attack. Both Ekbote and Bhide have been booked but the police have not initiated any investigation against them.

There have been several u-turns in the Pune police’s claim. After the initial claim that the arrested persons were involved in the violence at Bhima Koregaon, the Pune police had claimed that they were plotting a “Rajiv Gandhi” style assassination of the prime minister. This claim was made on the basis of some letters found in the computers and laptops confiscated from the arrested accused persons. The NIA, however, has gone silent on this claim and there has since been no mention of it.

It also does not find mention in the remand application made before the special NIA court today.

Anand Teltumbde NIA Court April 14 by The Wire on Scribd

From 2018 onwards, the case has been handled by the local Maharashtra police. However, when the new government — led by the Shiv Sena, the Nationalist Congress Party and the Congress — was formed in November last year, the central home ministry suddenly decided to hand the case over to the NIA.

Considering the interstate links and implications on national security, the central government handed over the investigation to the NIA, today’s remand copy stated. Earlier, the investigation was handled by the Pune police and nine activists and lawyers were arrested in June and August 2018. The arrested persons have been in custody ever since.

Also read: ‘My Hope Rests on a Speedy and Fair Trial’: Gautam Navlakha Before His Surrender

NIA’s special public prosecutor Prakash Shetty told the court that the agency has found documentary evidence against Teltumbde and he was the convenor of Elgar Parishad that was organised on December 31, 2017. The agency has also alleged that Teltumbde has been a recipient of funds from the banned terror organisation CPI (Maoist).

“During investigation it is revealed that the role of present accused Anand Teltumbde has links with the banned outfit CPiI (Maoist),” the remand application stated.

The investigation agency has also accused Teltumbde of “hatching conspiracy” and “instigating enmity between two caste groups” which led to violence, loss of life and statewide agitation. “Since Teltumbde has been in an interim protection of various orders of honourable courts, the NIA has not had the opportunity to interrogate him,” the NIA lawyer argued.

Teltumbde, who was represented by his lawyer Maharukh Adenwala, told the court that while Teltumbe was abiding by the apex court’s order, he should not be taken into custody considering the outbreak of COVID-19 in the country.

“Dr. Teltumbde is 70 and he suffers from chronic bronchitis, and is an asthma patient,” she argued before the court.

In the application, Adenwala mentioned that Teltumbde suffers from cervical spondylitis, sapraspinatus tendinosis (associated with a small focal insertional tear) and prostratomegaly.